The Gilmore Farm in the Shadow of James Madison's Montpelier 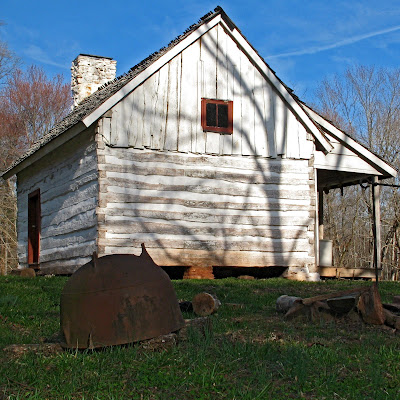 This was George and Polly Gilmore's farm in the second half of the 19th century. Both George and Polly were born into slavery at James Madison's Montpelier. The Gilmore family lived here until the 1930's.

Former President Madison died in 1836. When Dolley Madison sold Montpelier in 1844, George Gilmore and his future wife Polly conveyed with the property. They were married in 1850 and were freed in 1865 when Federal troops occupied Orange county. Two modern historical markers explain the significance of Gilmore Farm. 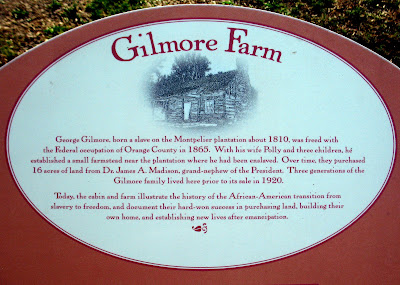 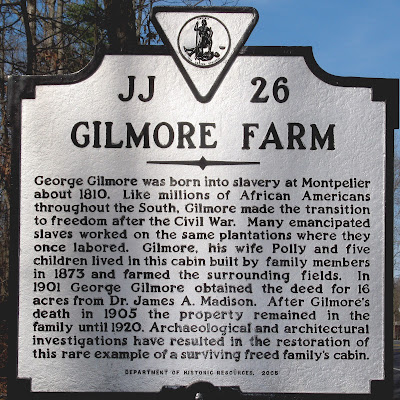 George Gilmore was born into slavery at Montpelier about 1810. Like millions of African Americans throughout the South, Gilmore made the transition to freedom after the Civil War. Many emancipated slaves worked on the same plantations where they once labored. Gilmore, his wife Polly and five children lived in this cabin built by family members in 1873 and farmed the surrounding fields. In 1901 George Gilmore obtained the deed for 16 acres from Dr. James A. Madison. After Gilmore's death in 1905 the property remained in the family until 1920. Archaeological and architectural investigations have resulted in the restoration of this rare example of a surviving freed family's cabin. -- JJ-26 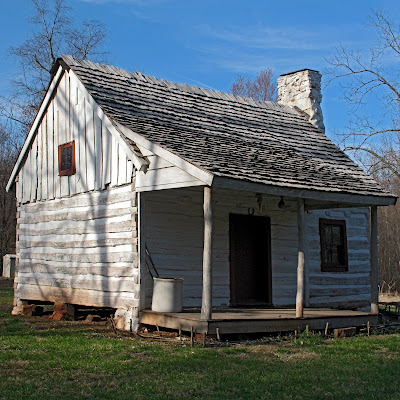 As the brochure says: "Written history tells us nothing of how the Gilmores learned of their freedom, what choices they faced, and what motivated their decisions. The Gilmore Cabin survives as the primary record of their lives and accomplishments." Three generations of Gilmores lived at the farm until the 1930's. When William Dupont, owner of Montpelier, purchased the property in 1920, it looked like this. 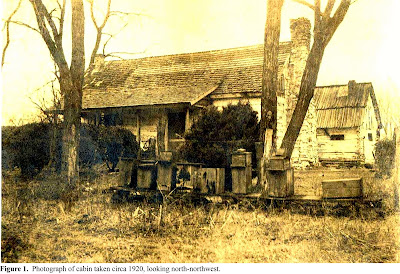 The Gilmores' first home at this site is the small building behind the cabin. Those are bee-hives in the front yard.

When the National Trust for Historic Preservation acquired Montpelier in 1984, the tumbled-down Gilmore Cabin was part of the property.  The Montpelier Foundation began restoring Madison's home and the Gilmore farm in 2000. They were both opened to the public in 2005. 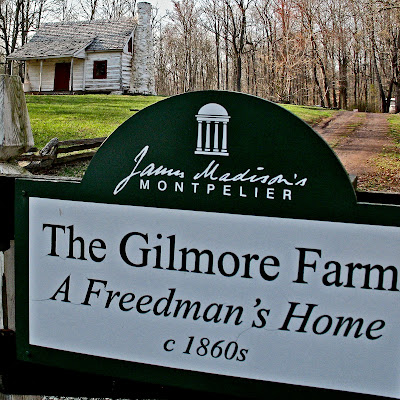