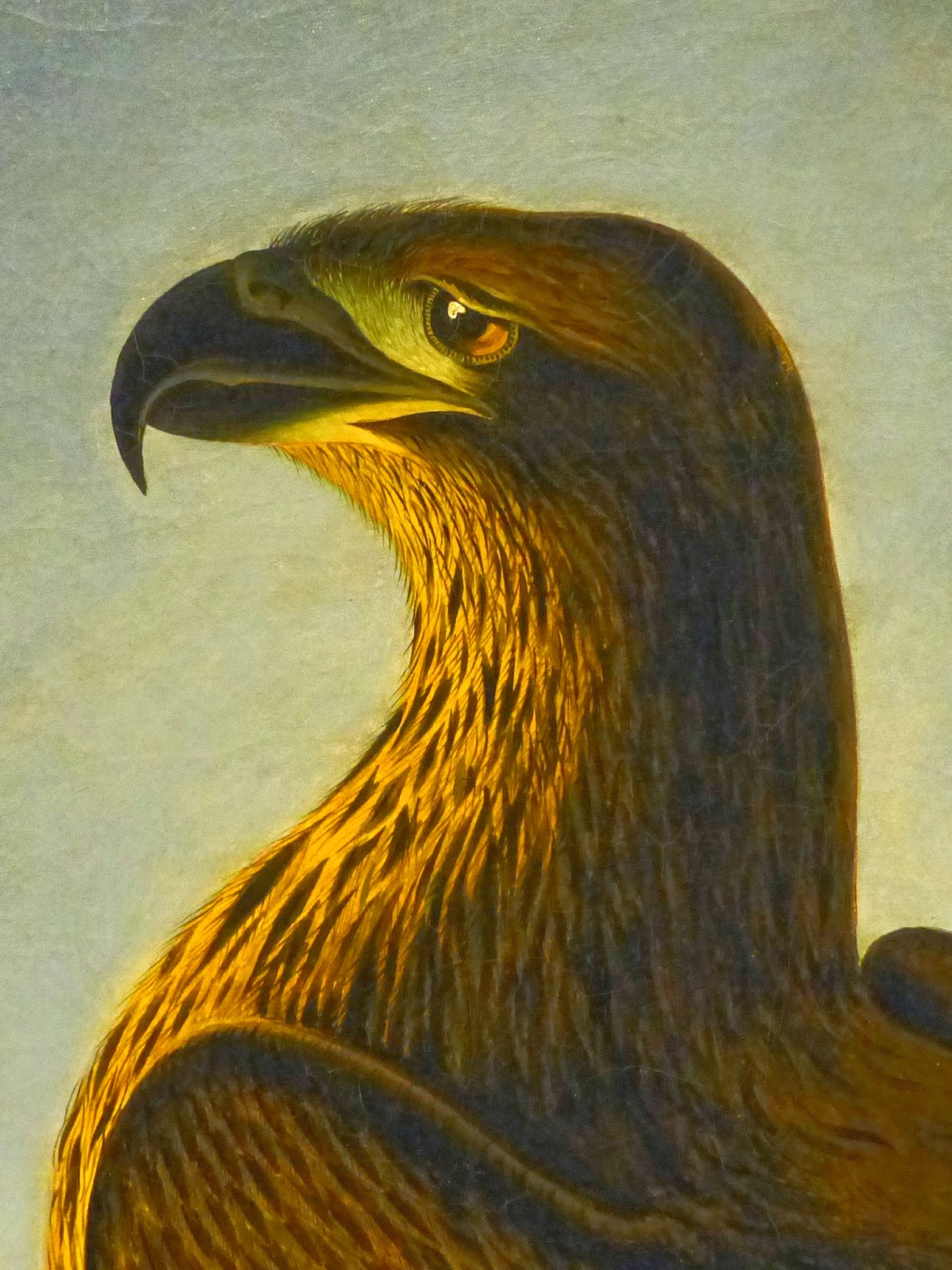 Of all the monuments to George Washington, Audubon's dedication of this eagle to Washington is perhaps the strangest. Strange because this species doesn't exist.

In the Smithsonian Museum of American Art in Washington, we find an oil  painting of an eagle by John James Audubon. 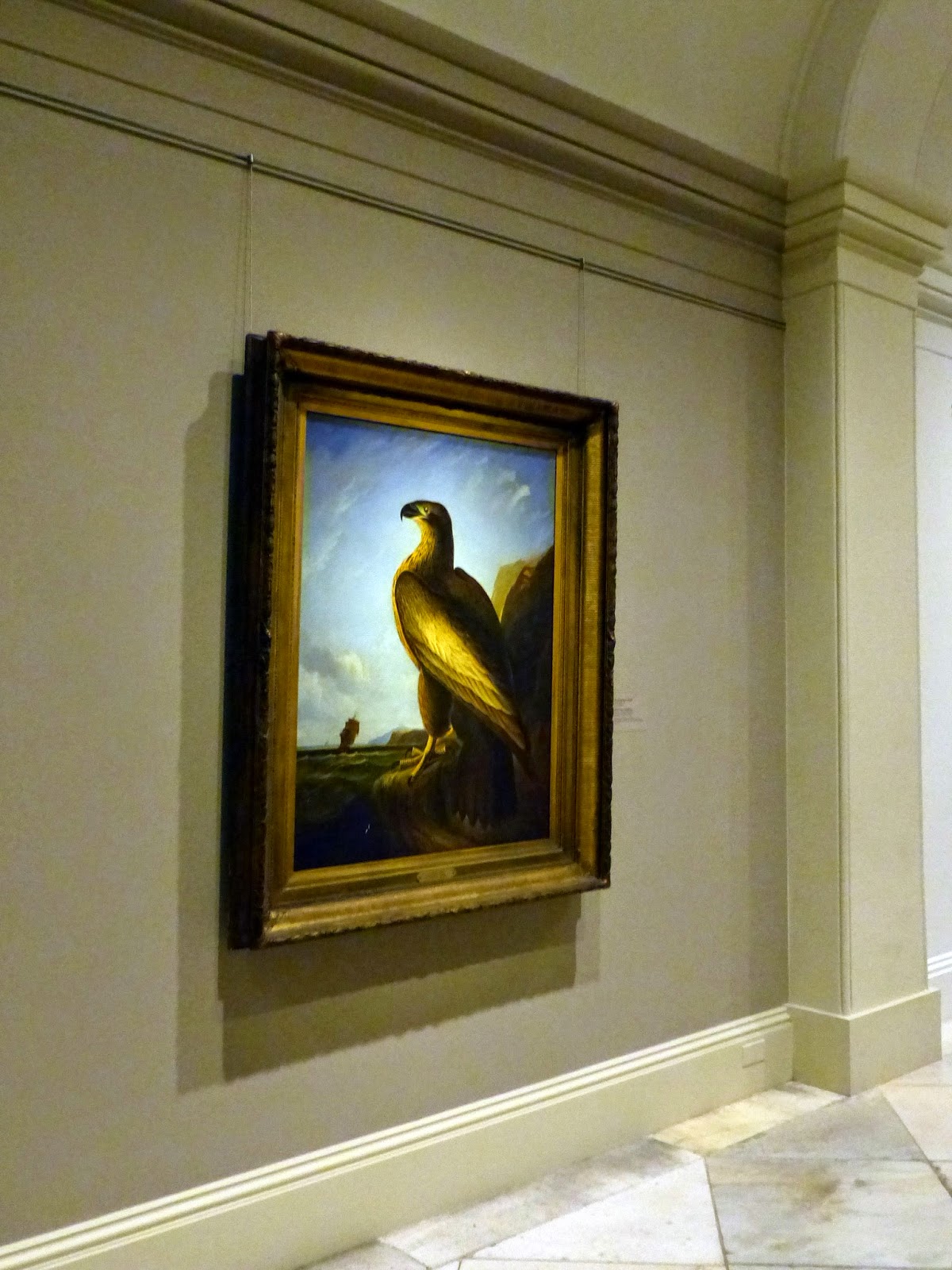 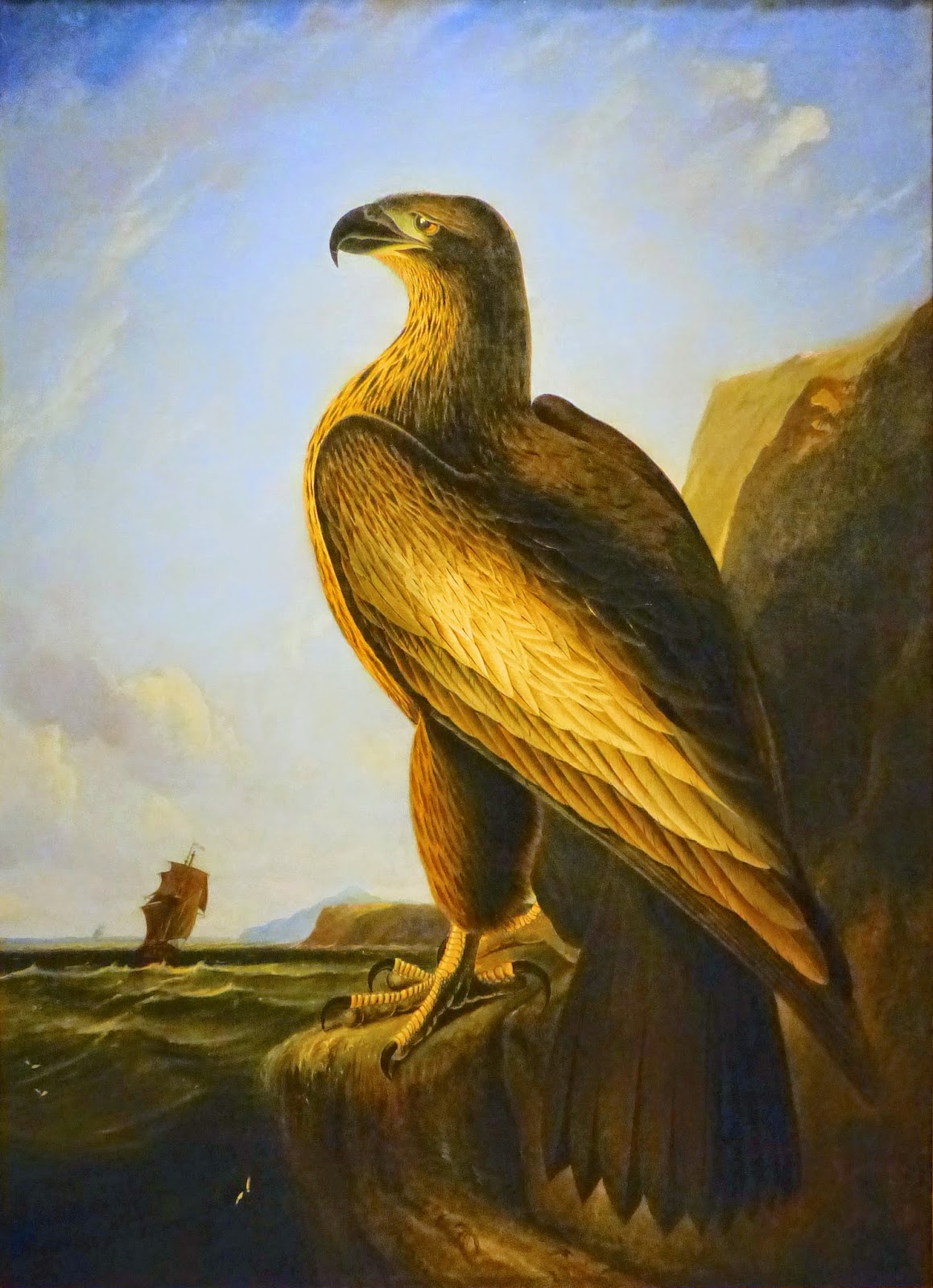 Its label tells us that it is "Washington Sea Eagle" painted by Audubon between 1822 and 1823. 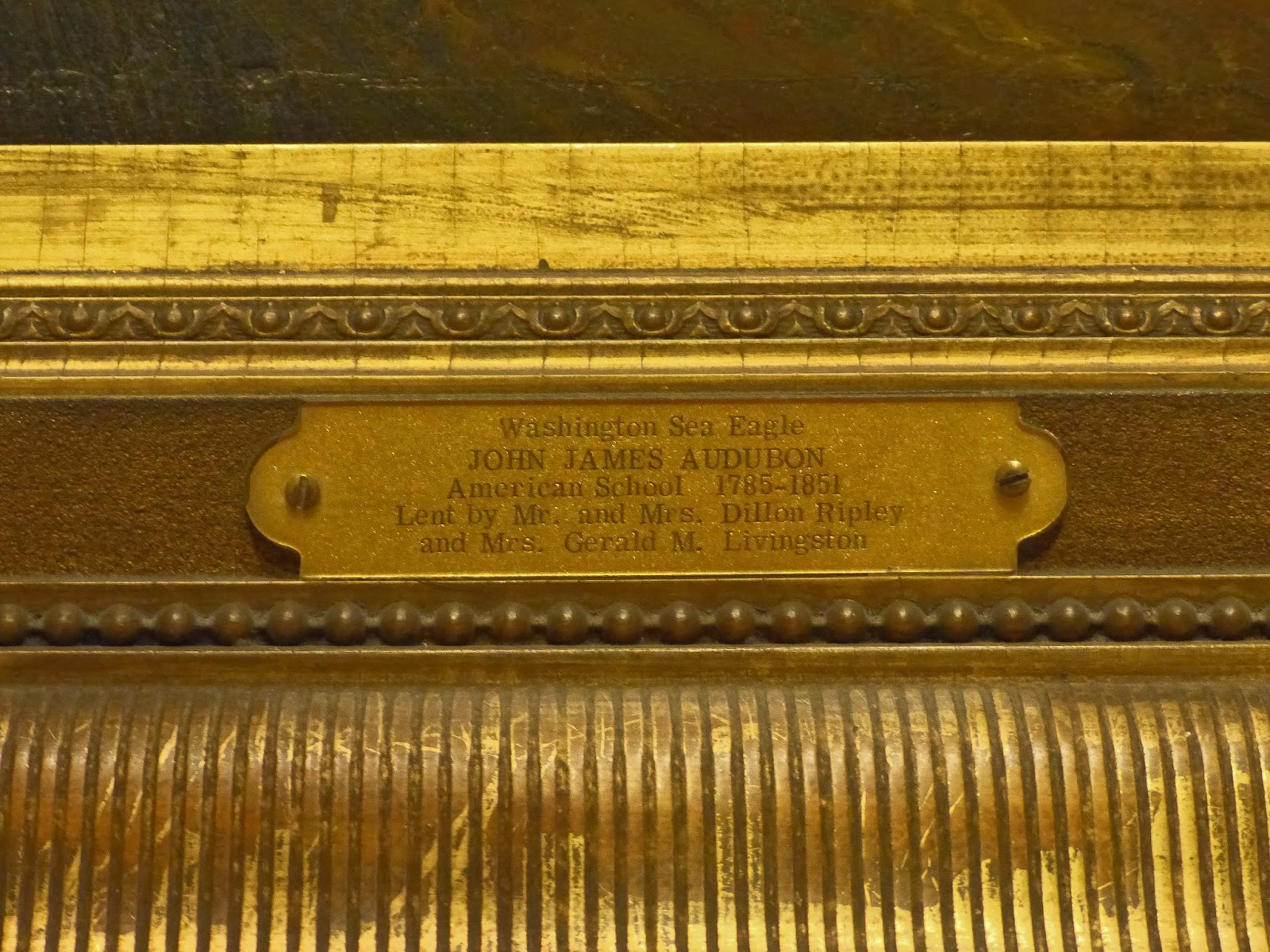 When Audubon observed a large brown eagle along the Mississippi River in 1814, he believed it was an as yet undescribed new species.

It was in the month of February 1814, that I obtained the first sight of this noble bird, and never shall I forget the delight which it gave me. Not even Herschel, when he discovered the planet which bears his name, could have experienced more rapturous feelings. (Herschel named the planet we call Uranus "Georgium sidus" after George III. In countries that did not approve of the English king, like France, it was called Herschel after its discoverer.)  We were on a trading voyage, ascending the Upper Mississippi. The keen wintry blasts whistled around us, and the cold from which I suffered had, in a great degree, extinguished the deep interest which, at other seasons, this magnificent river has been wont to awake in me. I lay stretched beside our patroon. The safety of the cargo was forgotten, and the only thing that called my attention was the multitude of ducks, of different species, accompanied by vast flocks of swans, which from time to time passed us. My patroon, a Canadian, had been engaged many years in the fur trade. He was a man of much intelligence, and, perceiving that these birds had engaged my curiosity, seemed anxious to find some new object to divert me. An eagle flew over us. "How fortunate!" he exclaimed; "this is what I could have wished. Look, sir! the Great Eagle, and the only one I have seen since I left the lakes." I was instantly on my feet, and having observed it attentively, concluded, as I lost it in the distance, that it was a species quite new to me. My patroon assured me that such birds were indeed rare; that they sometimes followed the hunters, to feed on the entrails of animals which they had killed, when the lakes were frozen over, but that when the lakes were open, they would dive in the daytime after fish, and snatch them up in the manner of the Fishing Hawk; and that they roosted generally on the shelves of the rocks, where they built their nests, of which he had discovered several by the quantity of white dung scattered below. - Ornithological Biography.


Later in Henderson, Kentucky, he shot one.

In returning from the little village of Henderson, to the house of Doctor Rankin, about a mile distant, I saw an eagle rise from a small enclosure not a hundred yards before me, where the Doctor had a few days before slaughtered some hogs, and alight upon a low tree branching over the road. I prepared my double-barrelled piece, which I constantly carry, and went slowly and cautiously towards him. Quite fearlessly he awaited my approach, looking upon me with undaunted eye. I fired and he fell. Before I reached him he was dead. With what delight did I survey the magnificent bird! Had the finest salmon ever pleased him as he did me?—Never. I ran and presented him to my friend, with a pride which they alone can feel, who, like me, have devoted themselves from their earliest childhood to such pursuits, and who have derived from them their first pleasures. To others I must seem to "prattle out of fashion." The Doctor, who was an experienced hunter, examined the bird with much satisfaction, and frankly acknowledged he had never before seen or heard of it. 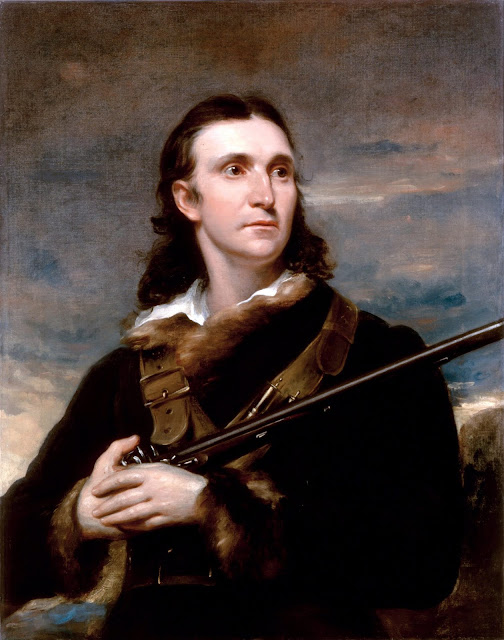 Audubon presented this new-found species to the ornithological world in his 1827 Birds of America with this illustration...


... and a report in the London Magaizine of Natural History in 1829 with this illustration and a detailed description. 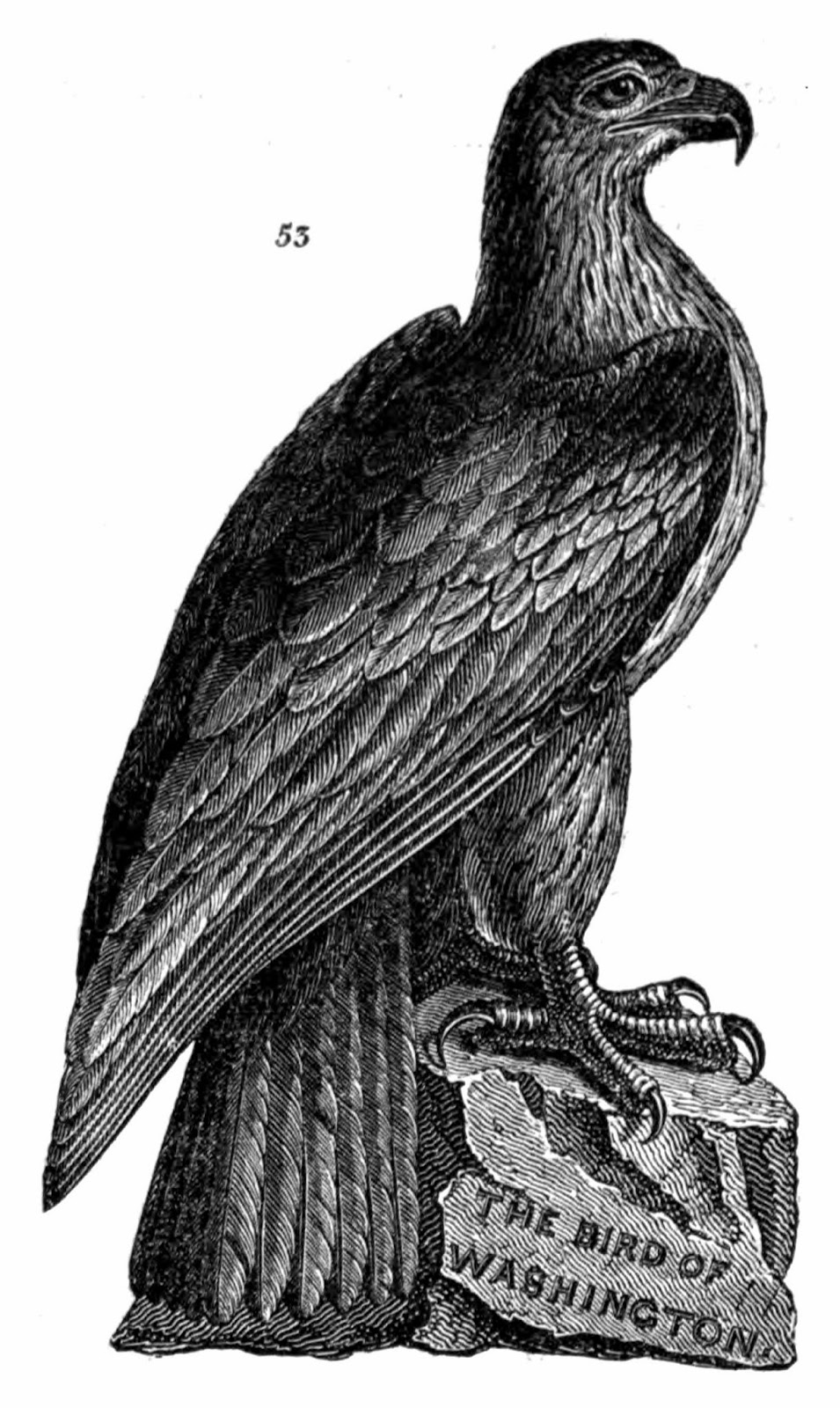 He named this new eagle in honor of George Washington Falco Washingtonii.

The name which I have chosen for this new species of Eagle, "The Bird of Washington," may, by some, be considered as preposterous and unfit; but as it is indisputably the noblest bird of its genus that has yet been discovered in the United States, I trust I shall be allowed to honour it with the name of one yet nobler, who was the saviour of his country, and whose name will ever be dear to it. To those who may be curious to know my reasons, I can only say, that, as the new world gave me birth and liberty, the great man who ensured its independence is next to my heart. He had a nobility of mind, and a generosity of soul, such as are seldom possessed. He was brave, so is the eagle; like it, too, he was the terror of his foes; and his fame, extending from pole to pole, resembles the majestic soarings of the mightiest of the feathered tribe. If America has reason to be proud of her Washington, so has she to be proud of her Great Eagle.

Aside from Audubon's description, no specimen of this bird exists.

Audubon called the Bald Eagle the "White Headed Eagle" because, as he said, "It is only necessary for me to add, that the name by which this bird is universally known in America is that of Bald Eagle, an erroneous nomination, as its head is as densely feathered as that of any other species, although its whiteness may have suggested the idea of its being bare." 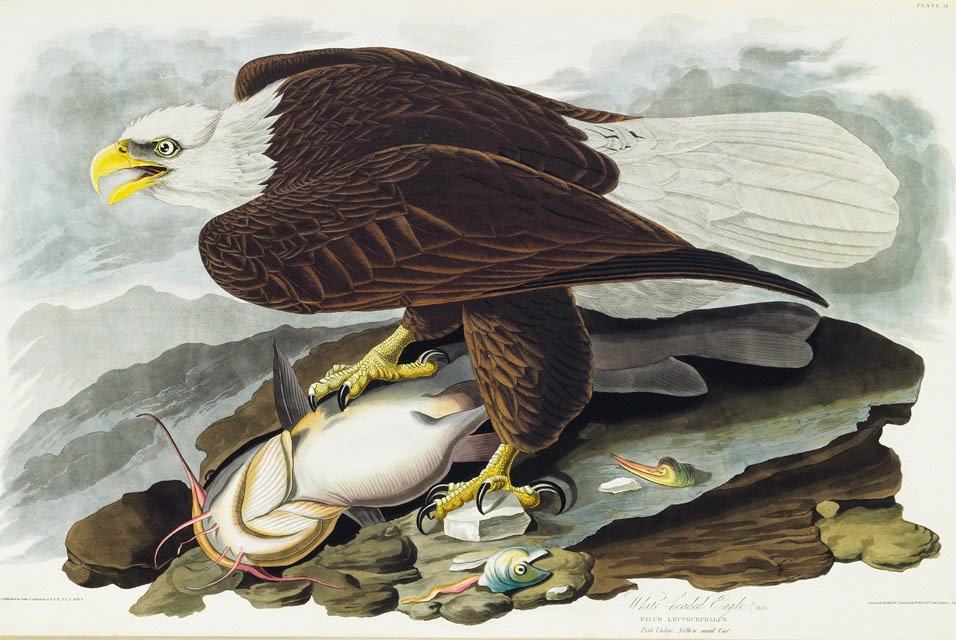 Audubon, like Franklin, disapproved of the choice of the Bald Eagle as the National Bird.
In his account of the White Headed Eagle, he remarked

Suffer me, kind reader, to say how much I grieve that it should have been selected as the Emblem of my Country. The opinion of our great Franklin on this subject, as it perfectly coincides with my own, I shall here present to you. "For my part," says he, in one of his letters, "I wish the Bald Eagle had not been chosen as the representative of our country. He is a bird of bad moral character; he does not get his living honestly; you may have seen him perched on some dead tree, where, too lazy to fish for himself, he watches the labour of the Fishing-Hawk; and when that diligent bird has at length taken a fish, and is bearing it to his nest for the support of his mate and young ones, the Bald Eagle pursues him, and takes it from him. With all this injustice, he is never in good case, but, like those among men who live by sharping and robbing, he is generally poor, and often very lousy. Besides, he is a rank coward: the little King Bird, not bigger than a Sparrow, attacks him boldly, and drives him out of the district. He is, therefore, by no means a proper emblem for the brave and honest Cincinnati of America, who have driven all the King Birds from our country; though exactly fit for that order of knights which the French call Chevaliers d'Industrie."

But complications arise in considering Audubon's Washington Eagle to be  an immature Bald Eagle. As described by Audubon, Washington's Eagle was enormous. He reported that his specimen had a wingspan of ten feet two inches. Large Bald Eagles have a wing span in the range 7 feet sometimes up to 8 feet. In the course of identifying Washington's Eagle with large Alaskan subspecies of Bald Eagle in 1931, Peters remarked that "Audubon’s type of washingtoniensis had a wing measurement of 32 inches; 4 inches longer than any Alaskan specimen measured by me if measured the same way.”  Bald Eagles, like other birds and animals, do tend to be larger in the northern parts of their range (Bergman's Rule), but Audubon shot his extra large specimen in Henderson Kentucky! Mengle in 1955 says that "The logic of Peters’ reasoning is obvious, but vulnerable. If Audubon’s bird from Henderson was too large for a southern Bald Eagle, too large, in fact, for any known northern bird, it must have been a northern bird. But the question here is, how much too large? The picture evoked by a careful consideration of the original written description is downright unnerving."

It would be tempting to hope that this giant eagle exists undiscovered somewhere in North America. But, in the end, I think we have to accept. J. A. Allen's conclusion in 1890 that:


It would be one of the strangest facts - in natural history that a bird like Audubon's Washington Eagle should remain undiscovered for more than fifty years, when its alleged habitat is within the settled parts of the United States. On the whole, it seems to me tolerably evident that this supposed species should be considered as based on a large example of H.leucocephalus, and that a "few grains of allowance" may be safely made for slight inaccuracies on the part of its enthusiastic discoverer. 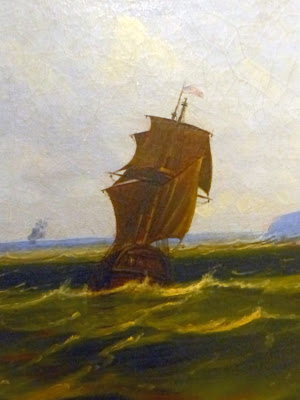 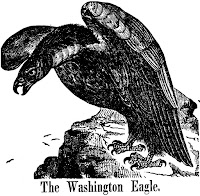 ========================================================
In 1997, Linda  Dugan Partridge argued that the illustration for “Washington's Eagle” was cribbed from Rees's Cylopædia.
Mathew R. Halley casts Audubon's  identification of this bird in an even harsher light in his June  22, 2020 article “Audubon's Bird of Washington: Unravelling the Fraud that Launched The Birds of America” in the  Bulletin of the British Ornithologists’ Club, 140(2):110-141 (2020).
In a blog post Halley further accuses Audubon of collecting the skulls of Mexican soldiers killed at the battle of San Jacinto in support of Dr. Samuel George Morton's attempt to classify races by cranial capacity.
See also,  Gabriel Foley, Jordan Rutter's August 4, 2020 Washington Post article “The Stench of Colonialism Mars these Bird Names. They Must be Changed.”  Foley and Rutter argue that the names of certain birds  should  be changed because of the failings of their namesakes, including Audubon's Oriole and Audubon's Shearwater, Audubon's Warbler, etc.
Posted by Allen Browne at 7:28 AM