The Jug and the Bridge 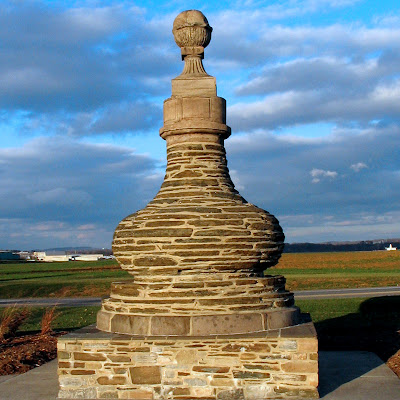 This stone jug stands in an obscure park on the east side of Frederick, Maryland. It was originally an ornamental monument on the stone turnpike bridge over the Monocacy River.

The old turnpike bridge came to be called the Jug Bridge because of this odd shaped monument. A persistent rumor holds that a real jug of whiskey was buried in the demijohn shaped monument. The inscriptions commemorate the construction of the bridge in 1808-9. The ball on top of the monument was divided by a square. On the sides of the square were inscribed the names "J m Cockey" and "John E. Howard P-". Milton L. Seaman in his 1931 Phi Mu thesis described these inscriptions that no longer exist. He said that "That P- appearing after the name of John E. Howard is part of an original inscription signifying 'president' seems certain; also that it applies to the name J m Cockey as well seems likely on the supposition that they were successive presidents of the road company during the period of construction." 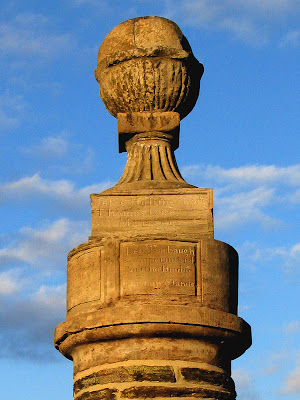 The inscription on the square below the ball identifies the river "Manoquaocy," an old spelling that didn't quite fit on its base and needed to be split -- "Manoquao/cy." 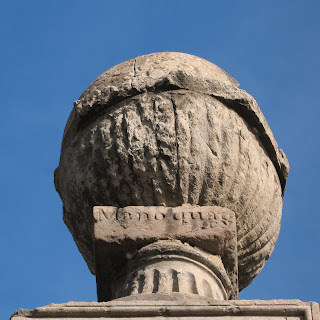 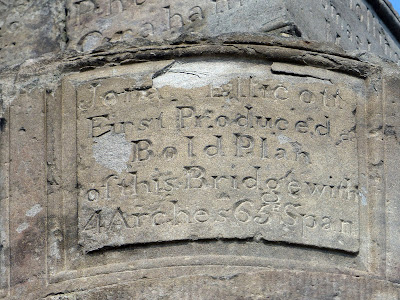 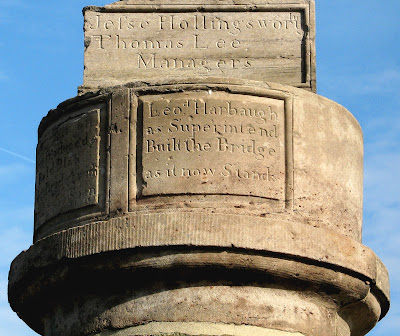 Leo'd. Harbaugh
as Superintend
Built the Bridge
as it now Stands 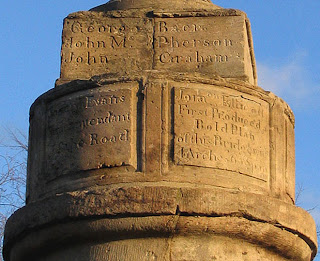 Joseph Evans
Superintendant
of the Road

That's Carl Fisher, famous automobilist, standing on top of the monument in this 1916 photo from American Motorist Magazine. The man on the left standing on the bridge parapet is A.G. Batchelder, executive chairman of the American Automobile Association. The man in the bowtie is "Colonel Bob" Tyndall. It's little wonder the square corner projections of the jug stopper have been broken off.

The 1808 bridge had four 65-foot stone arches spanning 425 feet and 5 inches. This picture from Marken & Beilfeld's 1925 Souvenir of Frederick shows what the bridge looked like. 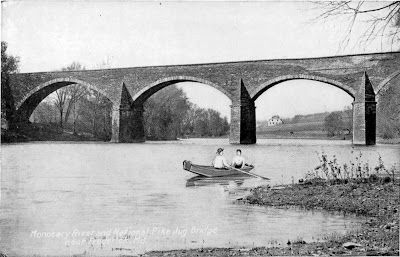 A 1933 photo by A. S. Burns shows the Jug monument where Leonard Harbaugh placed it on the east end of the bridge. 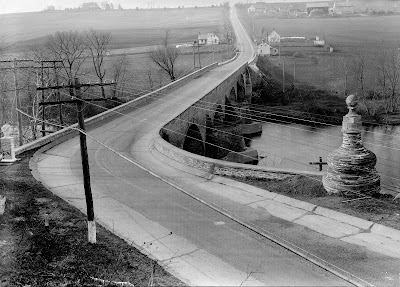 I might add right here the old stone Jug Bridge was built by a well known Frederick county name, Leonard Harbaugh, for the turnpike company at a cost of $55,000. This bridge will stand until the hills around are torn to pieces. Mr. Harbaugh was recognized as being one of the best stone masons of his time. He had the confidence and esteem of Gen. George Washington. He built the three locks at the Great Falls of the Potomac to make the river navigable for long boats; the undertaking at that time was thought to be an impossibility. He made the Potomac navigable for boats up above Cumberland. From Harper's Ferry he made the Shenandoah River navigable by building locks and cutting canals for upward of a hundred miles above the Ferry. Mr. Harbaugh built many stone buildings in Baltimore and Georgetown and the public buildings in Washington including the President's house before it was burned by the English.

The Baltimore-Frederick turnpike was an eastern feeder to the National Road. The turnpike company was founded in 1805 to improve the old horse paths into a road suitable for carriages and wagons. They used gangs of convict laborers called wheelbarrow men.  Scharf says that "each 'gang' had an overseer who carried a musket and side arms." In the automobile era, the road was designated part of the the National Old Trails Road around 1915, and by the mid 20's it was US Route 40.

Automobile traffic put a lot of stress on the old stone bridge. In his 1925 Phi Mu thesis, E. F. DeAtley says that "According to a report by A. N. Johnson, highway engineer, moisture has penetrated some of the joints and crevices and caused bulging and cracking with frost. The bulging of the sidewalls is particularly noticeable on the east end." In 1939, the state roads commission considered tearing down the 131 year old bridge and replacing it with a more modern one.  A Washington Post article on April 9, 1939, carried these headlines:

This photo of a lightly clad female canoeist accompanied the post article:
﻿﻿
E. R. Goldsborough joined the 1939 argument when he wrote to a local paper that "Engineers have estimated that the stone arch bridge will carry the increasing traffic with absolute safety for many years."

One span of the Bridge collapsed into the river on March 3, 1942. For two years, a wooden structure carried traffic over the breech while a high open spandrel bridge was built to carry Rt. 40 over the Monocacy. The new bridge was completed in 1944 and the old bridge was demolished. 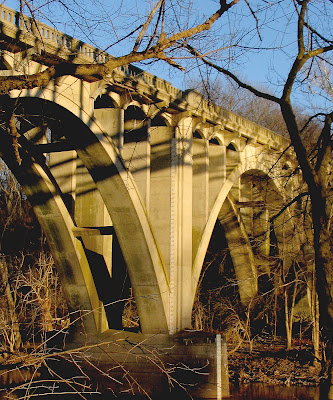 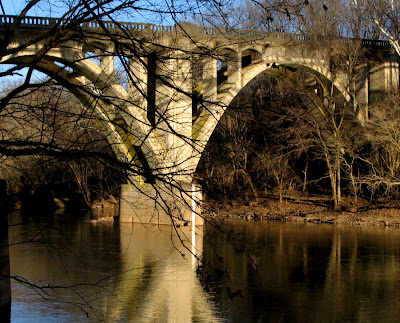 The Washington Post on November 2, 1944, carried this article about the opening of the new bridge.


Frederick. Md., Nov. 1 (AP). It's considered patriotic to bring back the bottles these days, but employees of a construction company who have just completed a new bridge over the Monacacy River on Route 40 buried an old brown whisky jug in the concrete against a bridge abutment.

They were merely carrying on an old tradition.

For legend in these parts says that, when the builders of the old Jug Bridge finished the structure they also finished an old brown jug of whisky and constructed a concrete monument to their "dead soldier" in the form of a mammoth jug, which gave the old Jug Bridge its name. 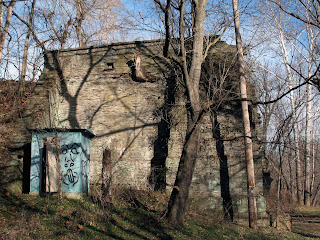 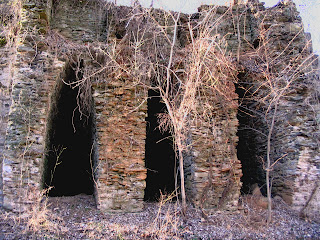 The east abutment can be found at the end of the Dr. Baxter road. 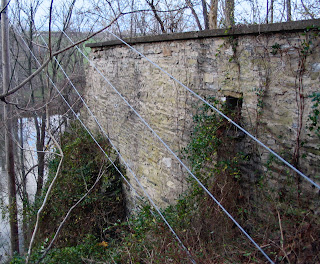 Here the west abutment is visible through a concrete arch of the 1944 bridge. 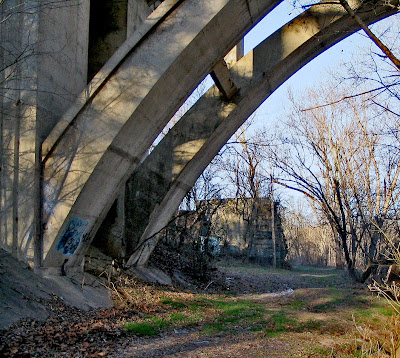 In 1955, a parallel deck truss bridge was built to carry east-bound traffic on Rt. 40 while the 1942 open spandrel bridge carried west-bound traffic. 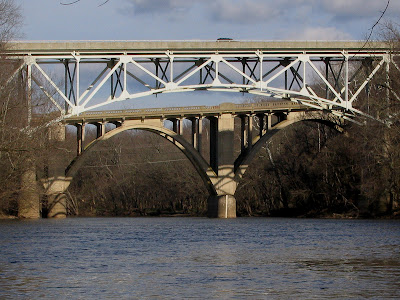 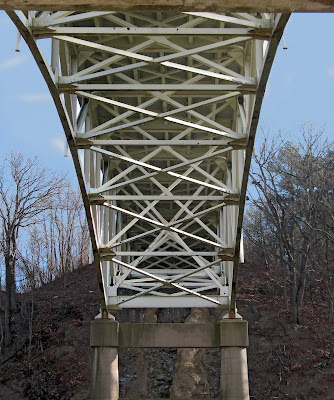 A bus accident in 1985 closed the open spandrel bridge. 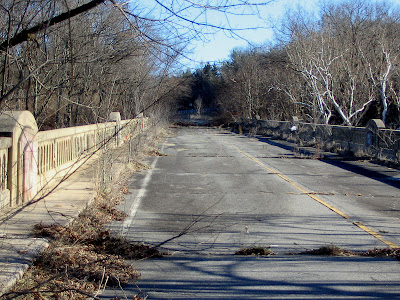 This photo, taken under the 1955 truss bridge, shows the east abutment of the 1808 bridge under the now abandoned 1944 open spandrel bridge. 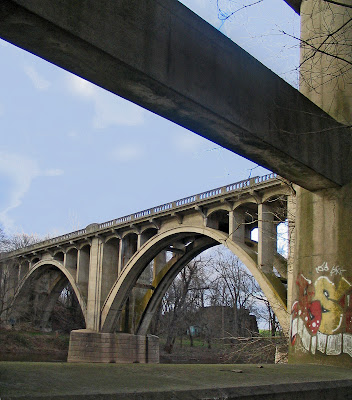 Today, the road over the deck truss bridge is designated Maryland 144. US 40 now runs on the same roadway as Interstate 70 and crosses the Monocacy on a bridge upstream from the Jug Bridge. 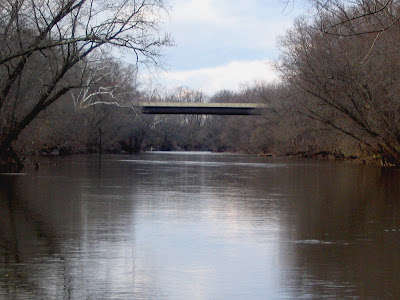 Remants of the old turnpike right-of-way survive in front of the Jug Bridge tollhouse on the east side of the river and as Dr. Baxter Road on the west side. 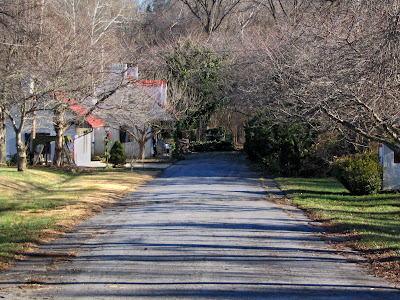 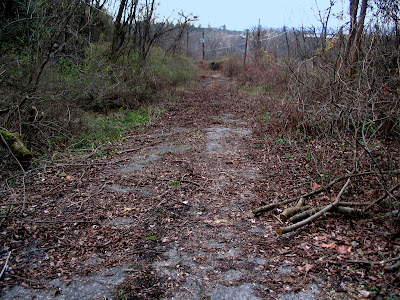 The remnant old road comes to a halt on top of the east abutment. 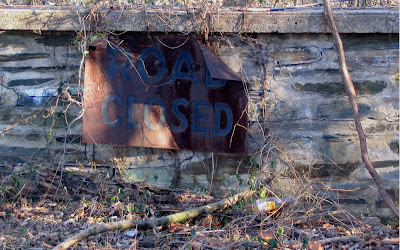 The Jug monument remained on the old bridge until 1965 when it was moved to a small park at East Patrick Street and Bowman Roads. East Patrick street is MD 144, formerly US 40, and before that the Baltimore Frederick Turnpike. 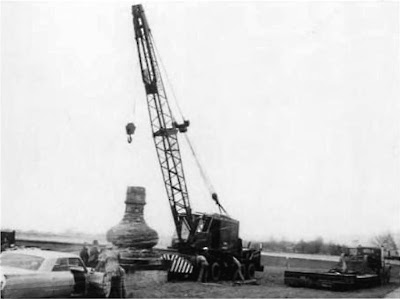 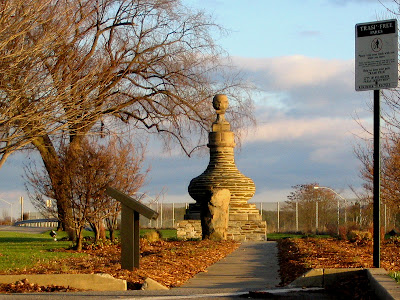 In 1942 Folger McKinsey wrote of the Jug Bridge that:

The old jug held its station through
so many fateful years;
It watched the changing problems
that created sighs or tears;
It saw the trucks and autos come
along in all their might-
And at last its heart is broken and
its walls have said good-night.

(See the full poem here)
Posted by Allen Browne at 9:35 AM