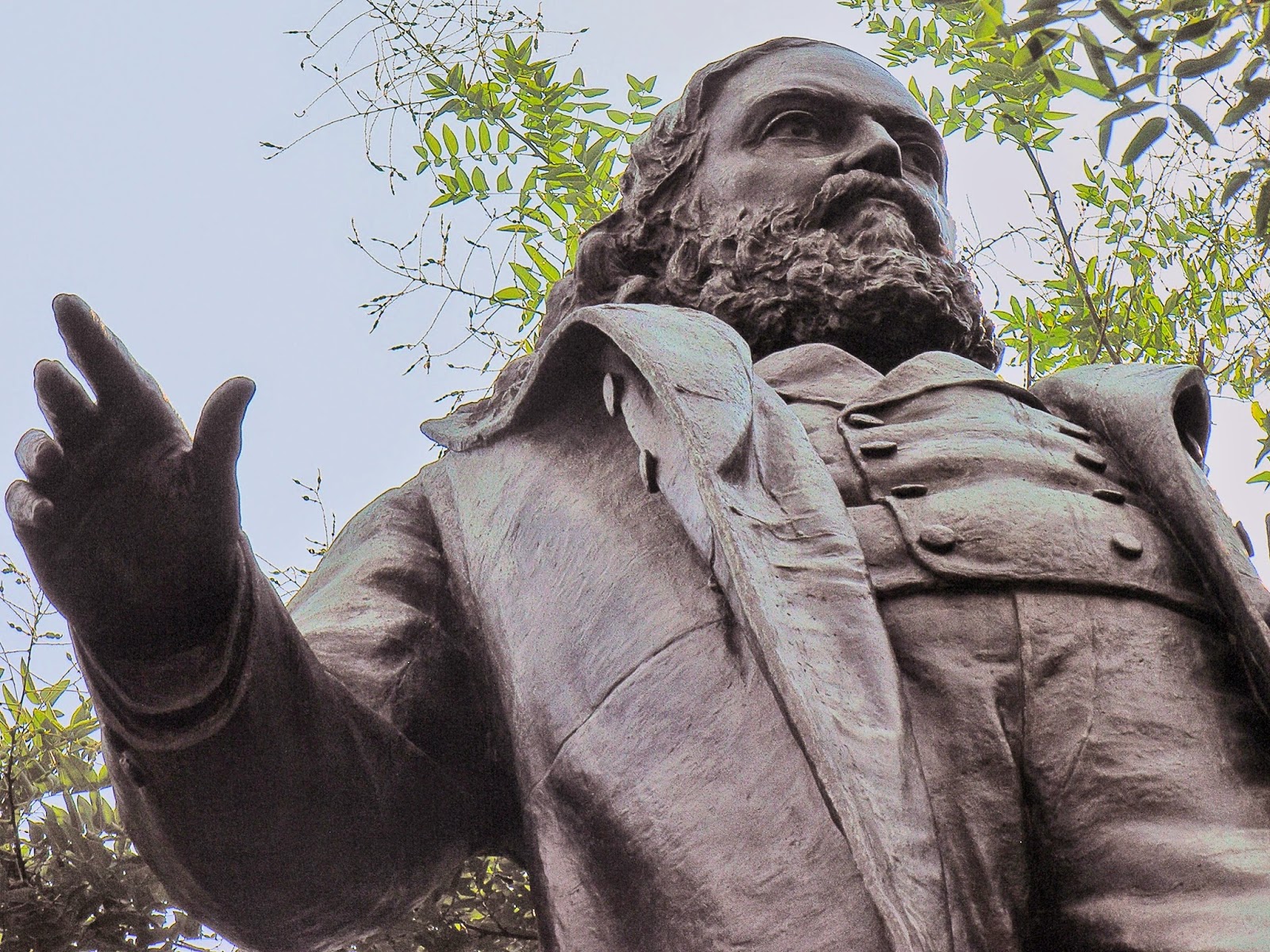 Nothing about Albert Pike is uncontroversial. 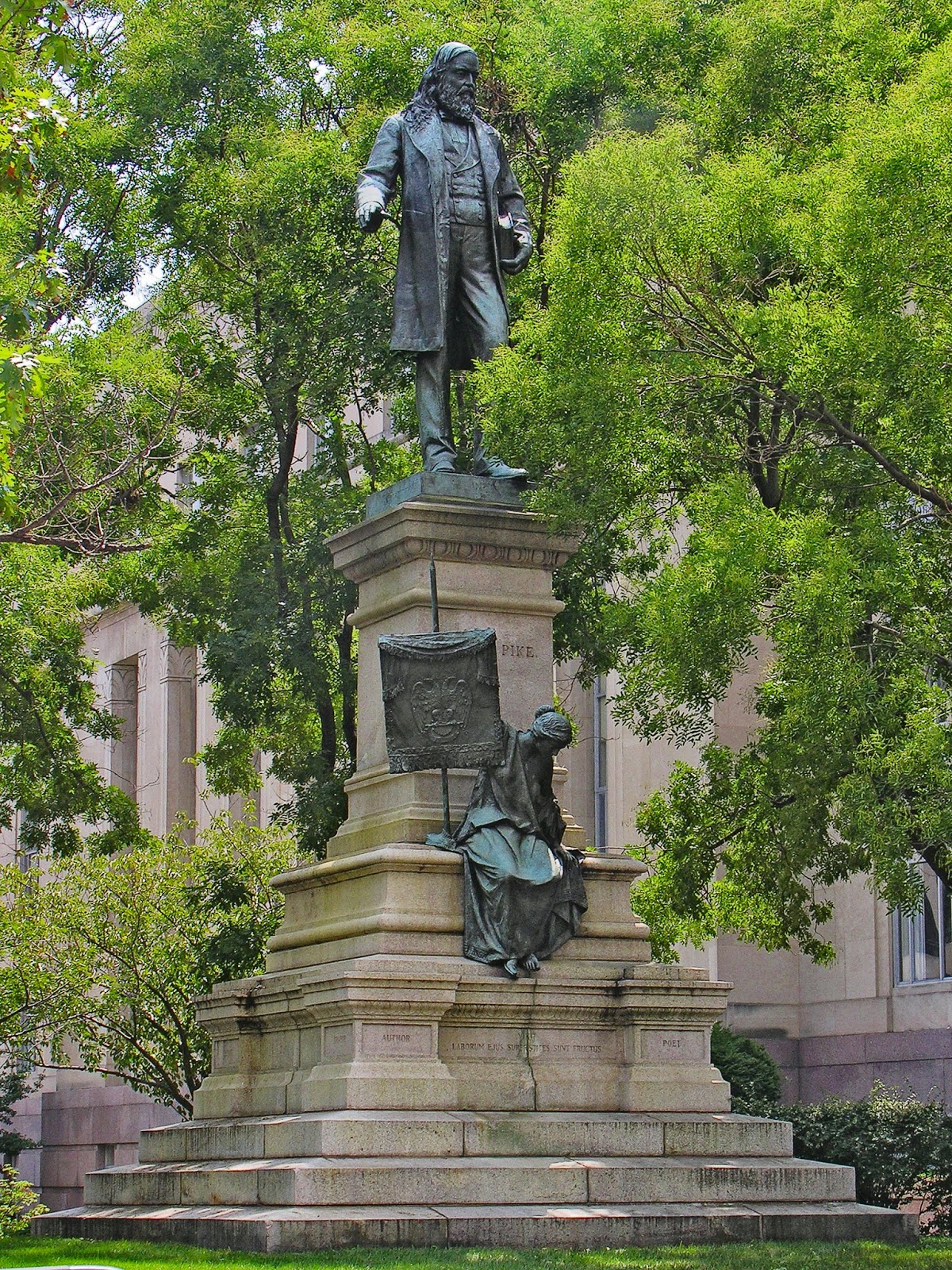 This statue on Judiciary Square in Washington, D.C., was sculpted by Gaetano Trentanove. As the carving on the pedestal says, it was "ERECTED 1901 BY THE SUPREME COUNCIL OF AASR OF FREEMASONRY FOR THE SJUSA." It is the only statue of a Confederate general in a city filled with statues of Civil War generals. When Lev and I found the statue many years ago, someone had left a hand- lettered sign saying "Albert Pike / Take a Hike!" Except for the fact that "Soldier" is one of the four attributes mentioned on the base of the statue -- Author, Poet, Soldier, Scholar -- the monument is not intended to commemorate Pike's checkered military career, but to honor him as a prominent Mason. 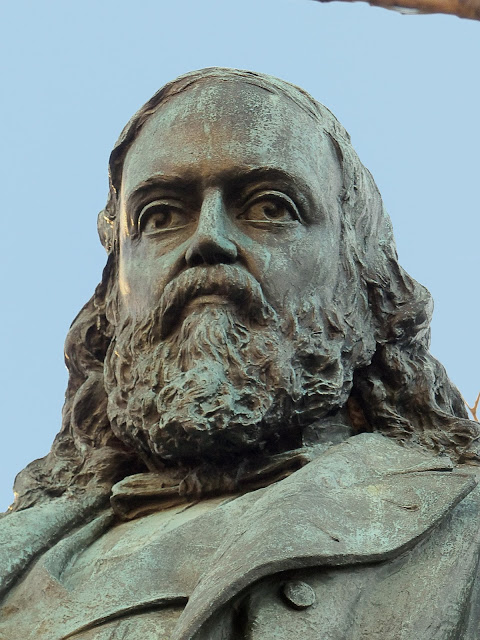 The Handsomest Man in the Southwest

During the Civil War, Pike trained and led three regiments of Native American Confederate Cavalry. At the Battle of Pea Ridge, his troops did well in the initial attack but fell into disarray in the following counter-attack. There are accusations that his troops scalped captured Union troops and that he fled the field while his troops were under fire. He later resigned his commission in the face of charges of insubordination and treason. Frazar Kirkland, in his book Pictorial Book of Anecdotes of the War of the Rebellion, calls Pike the "handsomest man in the southwest" and goes on to excoriate him in words that display Kirkland's love of the Union and bias against Native Americans: 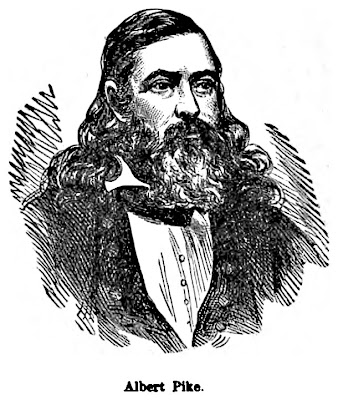 But from all this eminence, he became an exile from his home, & traitor to his country, the pusillanimous leader of red-handed savages against the valiant defenders of the Union and the noblest flag that ever floated, and, to cap the climax, deserted the savage victims of his own silver-tongued eloquence, and ran like a coward in the day of battle!

Its widely believed that Albert Pike organized and led the Arkansas Ku Klux Klan. Susan Lawrence Davis, in her 1924 book Authentic History of the Ku Klux Klan, says "Surely, after reading these facts it will not be hard for our fair-thinking fellow citizens of the North to account for the solidity of the South and the organization of the Ku Klux Klan in Arkansas, which was led by GENERAL ALBERT PIKE" (emphasis in the original. read Davis's biography of Pike here.). Other sources dispute this claim. For example, The Complete Idiots' Guide to Freemasonry or this page: "Albert Pike Did Not Found The Klu Klux Klan".

Pike's obscure occult books on Masonic ritual have not escaped controversy either. 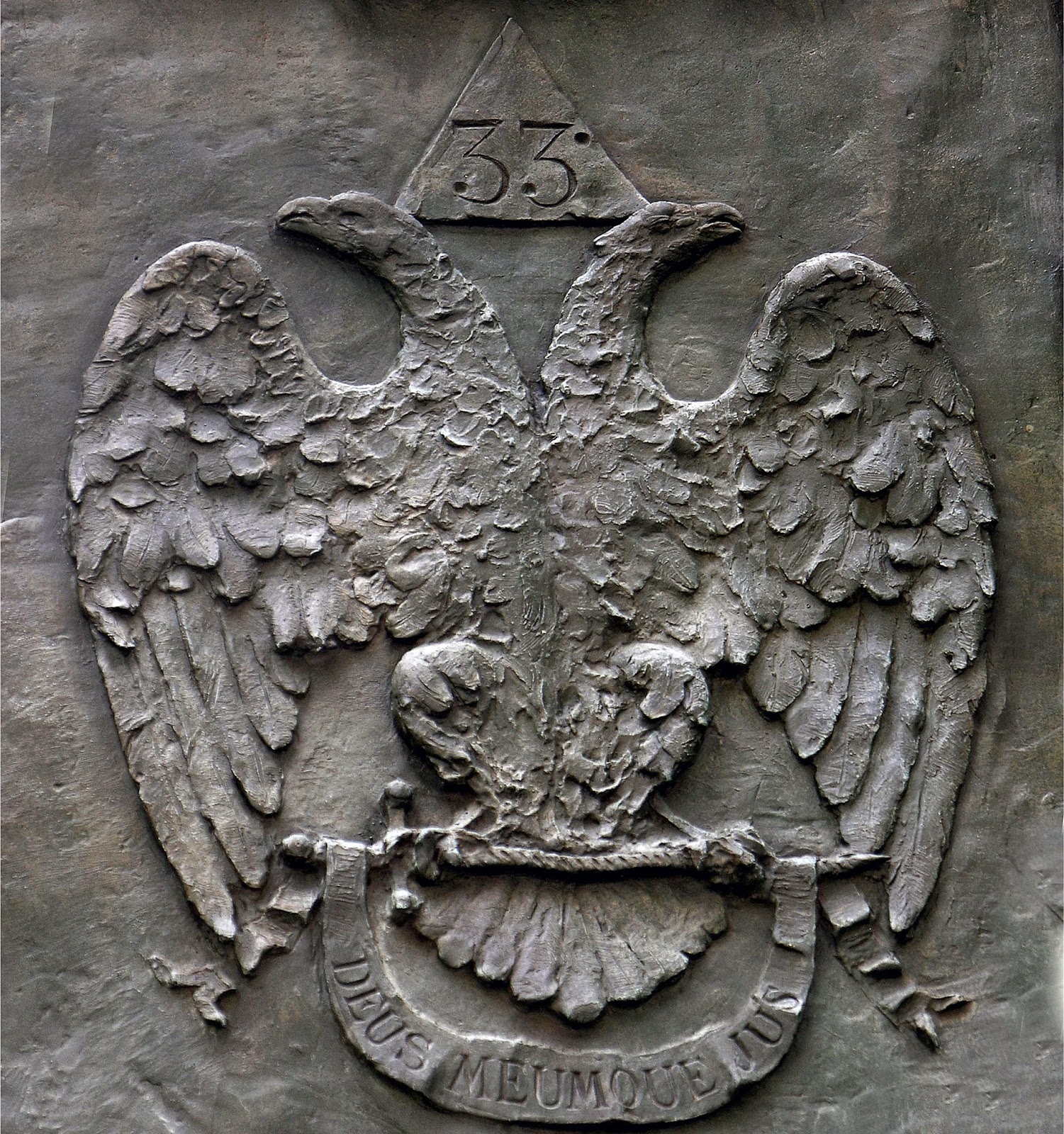 On their basis, Pike (and indeed Masonry itself) has been portrayed as advocating the worship of Lucifer and hence Satan.


The identification of Lucifer, the morning star (the planet Venus to you and me), with Satan is a stretch. But to cast Masons as Satanists because of Pike's ramblings seems particularly wrong-headed. Here's a page from a religious tract by Chick Publications that does just that.

﻿
For a direct refutation of this Chick tract, see here. For more on Pike and Lucifer, take a look at this page.

Finis L. Bates was an early 20th century conspiracy theorist who sought to prove that John Wilkes Booth had not died at Garrett farm in 1865, but survived and committed suicide in 1903. In his book, The Death and Suicide of John Wilkes Booth, he quotes a journalist named Col.C. M. Connolly who says:

One night [in 1884] I was in the Pickwick Hotel barroom talking to Gen. Albert Pike. ... Tom Powell, mayor of Fort Worth, joined us, and Temple Houston, youngest son of the ex-Governor of Tennessee, the man who whipped Santa Anna at San Jacinto, and the first president of the Texas republic (Gen. Sam Houston), was there. ... suddenly he [Pike] threw up his hands, his face white as his hair and beard, and exclaimed: 'My God! John Wilkes Booth!'...

Over the years, a thick blanket of folkloric history seems to have enfolded Albert Pike.

In his role as southern poet, Pike rewrote the words to Dan Emmet's comic love song Dixie in a more nationalistic mode.

The Fruits of his Labors Live after Him 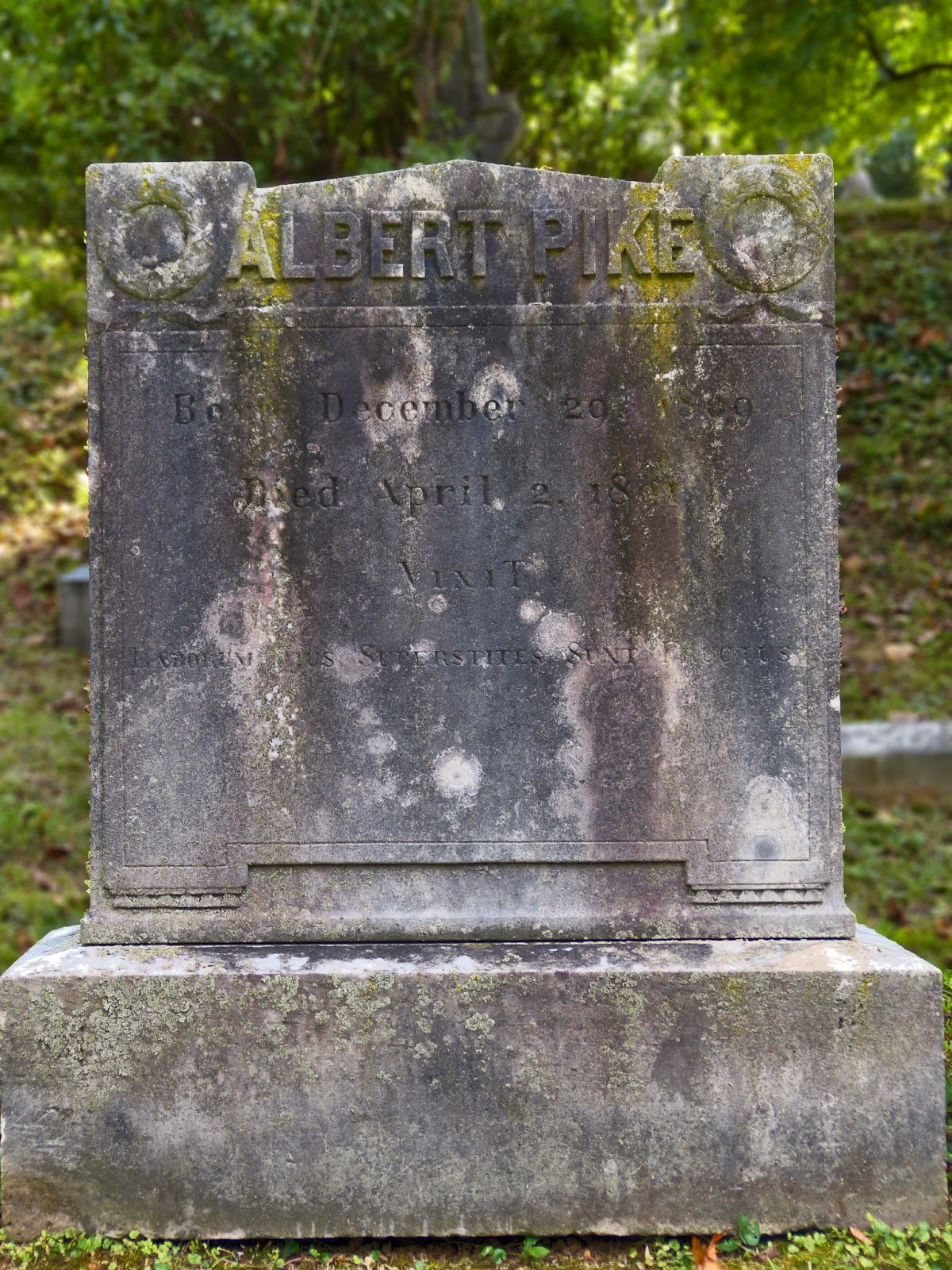 Albert Pike
Born December 29, 1809
Died April 2, 1891
Vixit
Laborum Ejus Supersites Sunt Fructus
(He has lived)
(The fruits of his labors live after him)


Pike's remains were moved in December of 1944 to the new House of the Temple. His burial in a vault behind the steps in the Temple, required an act of Congress. The vault is in the wall behind this memorial bust. 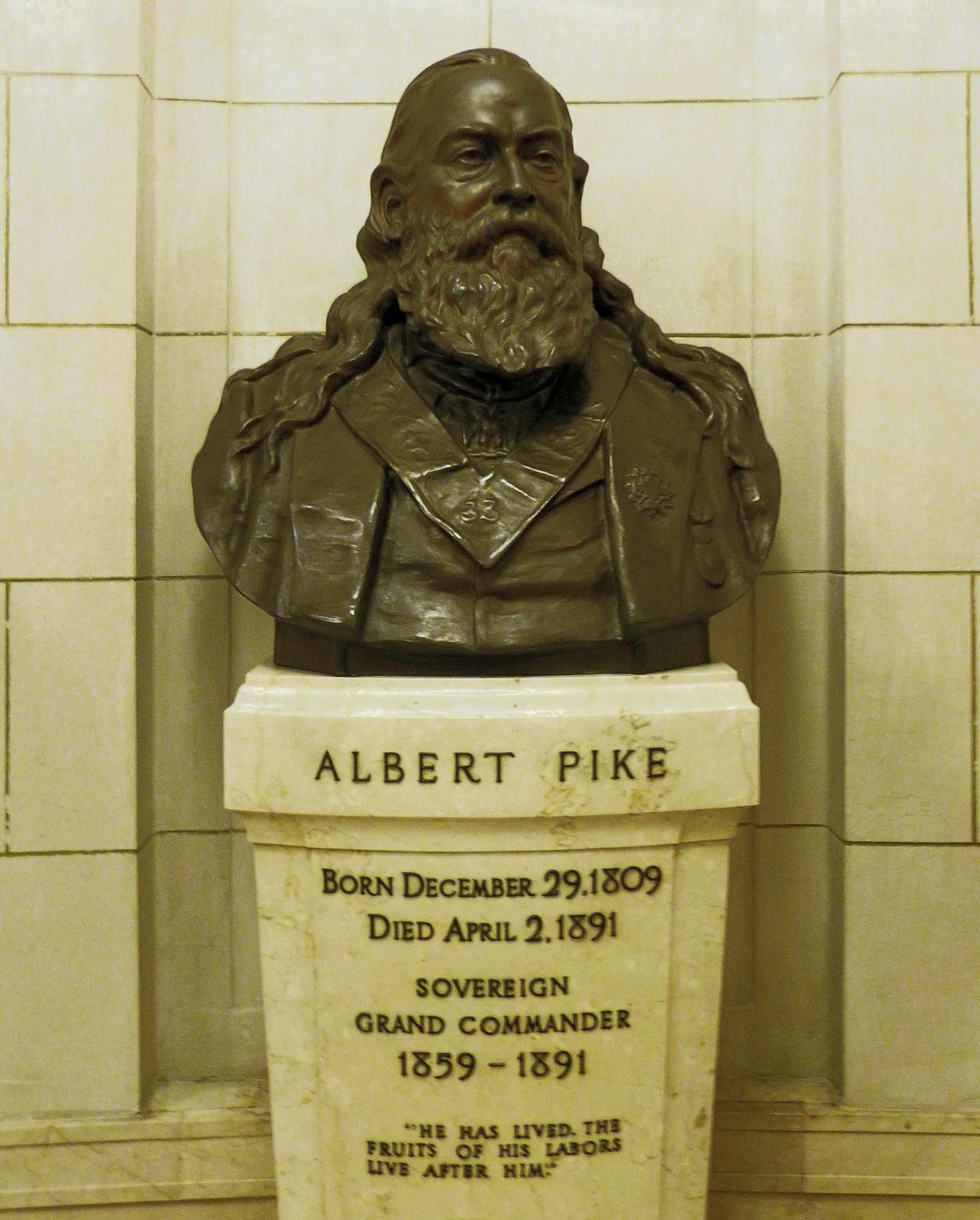 
The Statue -- White and Wrong

The continued presence of Albert Pike's statue on Judiciary Square has been controversial, too.

In 1992, followers of Lynden LaRouche covered the statue with a sheet and called for it to be removed ("LaRouchies, Masons and Klansmen, Oh My" in DCist). A bill was even introduced in the City Council to have it removed. Loewen lists this statue as number 11 on his top 20 monuments "in need of toppling."


I side with Robert Hunter who wrote in the Baltimore Afro-American:

This statue is a representing symbol of the past and present practice of the evils of the American oppression. His imposing presence in the sculptured form presents the magnified arrogance of those who use cruelty as an experience of horror to oppress or destroy.

To remove the memorial statue of Albert Pike from public view; to excise and execute, to commit the statue to a death sentence; is to seek to remove this reality of evil from the American historical landscape. It is a movement to purge and cleanse the United States of any appearance of past and present evil. It is a simplistic effort to make the Country look "White and right" instead of "White and wrong." 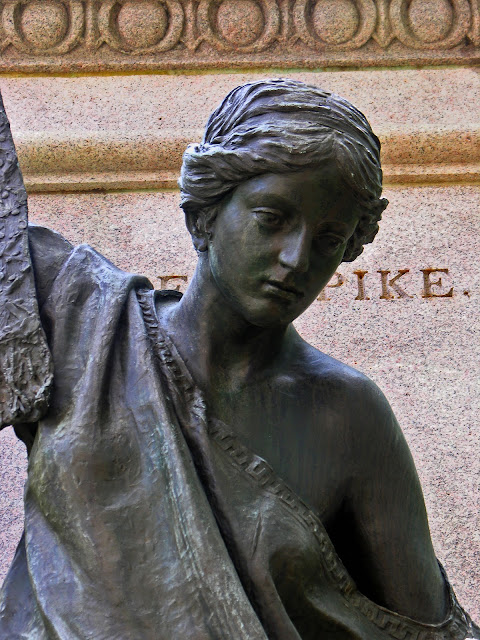