At the National Cathedral 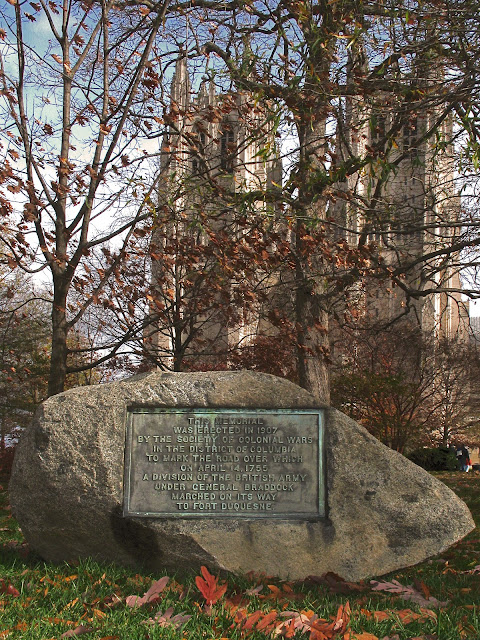 This boulder, sitting on the front lawn of the National Cathedral on Wisconsin Avenue, may be the oldest historical marker in the Washington, DC, area commemorating a Colonial event.

On November 10, 1907, the Society of Colonial Wars held a ceremony at the site of the National Cathedral to dedicate this marker commemorating Braddock's ill-fated 1755 march to Fort Duquesne. In his speech, Marcus Benjamin, Governor of the society, called it "the first memorial ever erected in this vicinity in commemoration of a historical event during the Colonial period." The boulder pre-dates the cathedral, construction of which began only a month earlier. 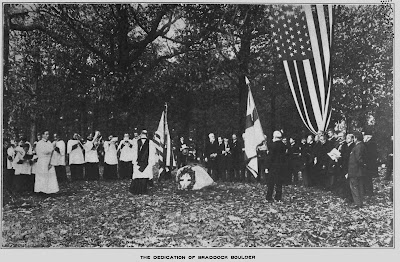 The bronze tablet reads:
This Memorial
Was Erected In 1907
By The Society Of Colonial Wars
In The District Of Columbia
To Mark The Road Over Which
On April 14, 1755
A Division Of The British Army
Under General Braddock
Marched On Its Way
To Fort Duquesne
Benjamin goes on to say:

Over yonder highway, known in history as Braddock's road,
a little more than 150 years ago, following the flag of our
mother country, a brave band of soldiers, in order to better
protect the homes of our ancestors, passed in front of this
spot on their way to cruel disaster.
To-day, under the green canopy of these splendid trees,
silent witnesses of that scene, within the precincts of this
sacred ground, recently consecrated by the presence of the
holy prelates of both the English and our own Church, we,
the descendants of worthy ancestors, are gathered to place a
permanent marker in enduring stone and bronze in memory
of that event.

"Yonder highway" would be Wisconsin Avenue, the southern end of the Rockville Pike (modern day MD 355). Benjamin is at pains to show that "...the line of march from Rock Creek to Frederick could have been over no other road than that now known as the Rockville pike".
When I visited in November of 2009, I found this lady gathering ginkgo nuts in the Cathedral close. 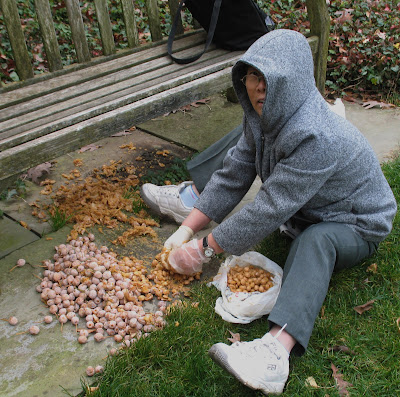