The Death of Ross 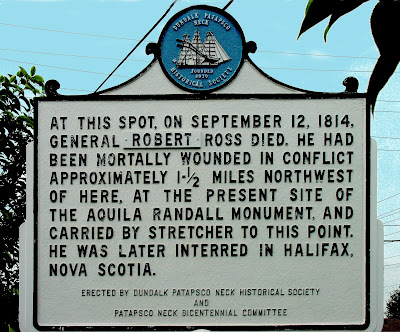 At this spot, on September 12, 1814, General Robert Ross died. He had been mortally wounded in conflict approximately 1-1/2 miles northwest of here, at the present site of the Aquila Randall monument, and carried by stretcher to this point. He was later interred in Halifax, Nova Scotia. Erected by the Dundalk Patapsco Neck Historical Society and Patapsco Neck Bicentennial Committee. 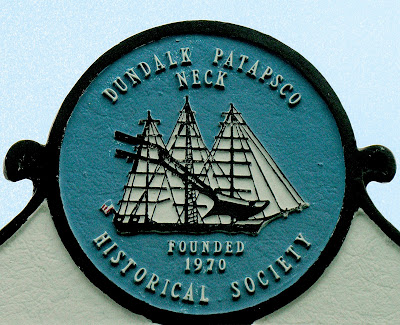 Major General Robert Ross was the Commander of the British troops as they moved up the pensinsula between the Patapsco and the Back River toward the Battle of North Point. 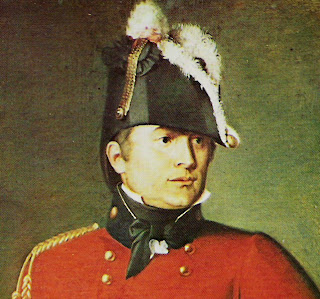 He was shot at the site now marked by the Aquila Randall Monument as he rode forward to observe the skirmish that had broken out on first contact with American forces. G. M. Brighty's 1816 engraving shows Ross falling into the arms of a fellow officer. 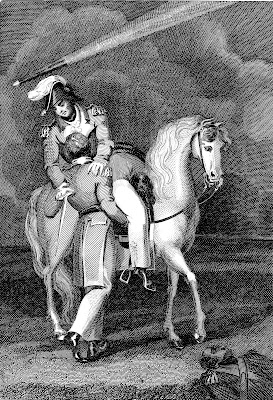 The event is memorialized in a couple of different places in Baltimore. The Southeast face of the Aquila Randall monument records the location at which Ross received his mortal wound. 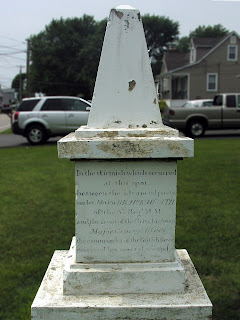 And the Wells and McComas monument memorializes the "Boy Martyrs of Baltimore" who are folklorically credited with killing Ross. Who among the American forces actually shot Ross is unknown; there are many claimants. Christopher George treats the question in depth here. 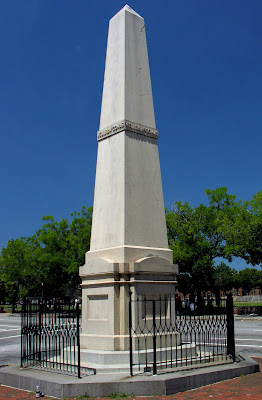 Ross was carried from the field toward the embarkation site at North Point but died beside the North Point Road near the Gorsuch farm at the site marked by this historical marker. 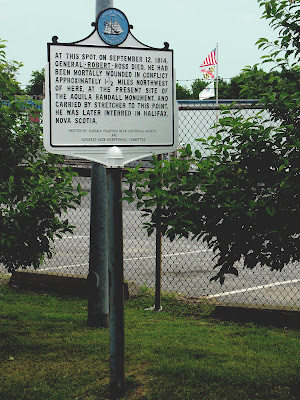 On the west side of the North Point Boulevard just north of its underpassage of the Baltimore Beltway (I-695) in Dundalk, the marker is difficult to find. It sits in front of Clark Western Building Systems at 4601 on the right of the southbound lane of the boulevard. 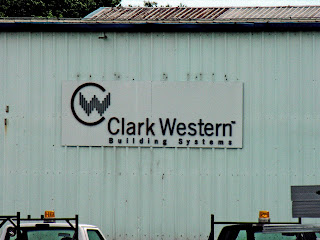 The Dundalk Patapsco Neck Historical Society must have been confused about Ross's name when they erected the marker; they recorded the General's first name as "Charles."  In this photo that Spork thinks is from the 1980's, the marker says "General Charles Ross." 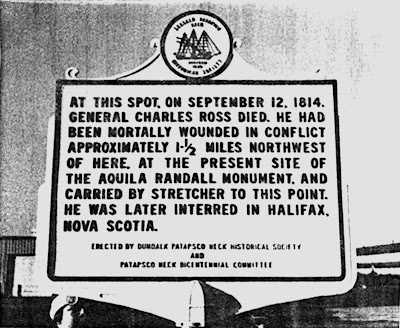 The marker has been corrected by bolting the correct name "Robert" over the incorrect "Charles." 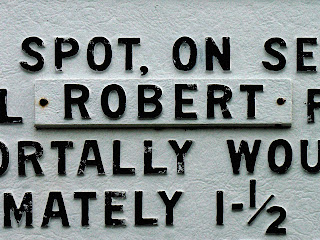 The British Commander died in the shade of a poplar tree. The old tree stood on this site until 1844 when its owner Vincent Green had it cut down for fear it would fall into the road. The Baltimore Sun remarked that “We doubt whether there is to be found in the country, a tree, under which “confusion to the enemies of liberty,” has been quaffed in full bumpers, more frequently than under the 'Ross' Tree.” as it has always been familiarly called.”

The Generals body was taken to Halifax Nova Scotia and buried with full military honors in the old burying ground there. His epitaph says that Ross "WAS KILLED at the commencement of an action which terminated in the defeat and Rout of THE TROOPS OF THE UNITED STATES NEAR BALTIMORE."

Ross has been honored in Britain for his victory at Bladensburg and death at North Point. His family name was augmented to "Ross of Bladensburg" and a broken-staffed American flag was added to his coat of arms. As the history of the XX Regiment tells it:

His Royal Highness had ordered the insignia of a Knight Commander of the Bath to be forwarded to General Ross, but his decease previous to their arrival caused them to be returned; with considerate kindness the Prince ordered them to be delivered to his widow, and at the same time commanded that the family designation should henceforth be Ross of Bladensberg.2 This distinction is unique, and was the best conceivable way of transmitting to posterity the name and services of a distinguished commander.
2 In addition to the family designation being ordered to be Ross of Bladensberg, the following augmentation was made at the same time to the family arms: -- Additional crest or badge: General's arm, with laurel wreath round it, issuing from a mural crown, grasping the broken flag of the United States. Addition to coat of arms: Same issuing from the embattled coat of arms of the family, grasping the broken flag of the United States. Additional motto: Over the additional crest "Bladensberg." 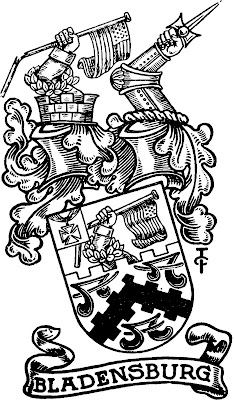 John Quincy Adams, after visiting the Aquila Randall monument, offered a toast to "Ebony and Topaz - General Ross's posthumous coat of arms, and the republican militiamen who gave it." The reference is to a Voltaire story in which Ebony represents evil and Topaz, good.  Wheelan suggests that this incident is an example of how "The unwieldy eloquence of the 'ex-professor' became yet another easy target for the Democrats' ridicule."
Posted by Allen Browne at 1:38 PM