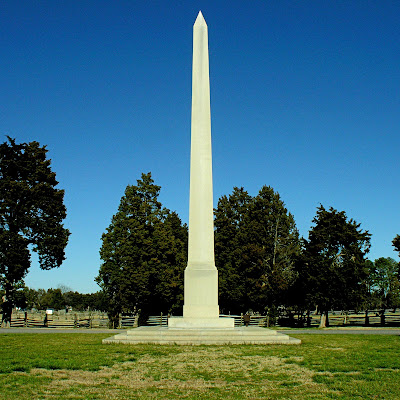 An historical marker on Pope's Creek Drive at the intersection with the King's Highway (Virginia Rt. 3) directs travelers to George Washington's Birthplace: 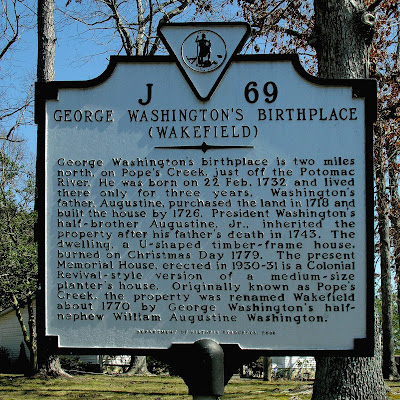 George Washington’s Birthplace is two miles north, on Pope’s Creek, just off the Potomac River. He was born on 22 Feb. 1732 and lived there only for three years. Washington’s father, Augustine, purchased the land in 1718 and built the house by 1726. President Washington's half-brother Augustine, Jr., inherited the property after his father’s death in 1743. The dwelling, a U-shaped timber-frame house, burned on Christmas Day 1779. The present Memorial House, erected in 1930–31 is a Colonial Revival-style version of a medium-size planter’s house. Originally known as Pope's Creek, the property was renamed Wakefield about 1770 by George Washington’s half-nephew William Augustine Washington.


Erected 2000 by Department of Historic Resources

An entry in Mary Ball Washington's bible recorded the birth of George Washington at his father's Pope's Creek plantation.

George Washington son to Augustine & Mary his Wife was Born the 11th Day of February 1731/2 about 10 in the Morning & was Baptis'd the 5th of April following Mr. Beverley Whiting Capt. Christopher Brooks Godfathers and Mrs. Mildred Gegory Godmother.

The year is expressed as 1731/2 because in earlier practice the year began on March 1. By Washington's birthday, January 1 had become New Years Day. So to keep things clear, both old-style and new-style year counts were used in dates. The birthday is February 11 because Britain and her colonies did not switch from the Julian Calendar to the Gregorian one we use today until December 31, 1751. The year 1752 had 11 extra days. So Washington's Birthday is February 22 on our calendars.

In 1815, George Washington Parke Custis visited to honor his famous stepfather. His letter to the Alexandria Gazette describes the ceremony.


In June, 1815, I sailed on my vessel, the "Lady of the Lake", a fine topsail schooner of ninety tons, accompanied by two gentlemen, Messrs. Lewis and Grimes, bound to Popes Creek in the County of Westmoreland, carrying with us a slab of freestone, having the following inscription:

"Here
The 11th of February, 1732, (Old Style)
George Washington
Was Born."
We anchored some distance from the land, and taking to our boats, we soon reached the mouth of Pope's or Bridge's Creek, and proceeding upwards we fell in with McKenzie Beverly, Esq., and several gentlemen composing a fishing party, and also with the overseer of the property that formed the object of our visit. We were kindly received by these individuals, and escorted to the spot, where a few scattered bricks alone marked the birthplace of the chief.
Desirous of making the ceremonial of depositing the stone as imposing as circumstances would permit, we enveloped it in the "star spangled banner" of our country, and it was borne to its resting place in the arms of the descendants of four revolutionary patriots and soldiers.
We gathered together the bricks of an ancient chimney that once formed the hearth around which Washington in his infancy had played, and constructed a rude kind of pedestal, on which we reverently placed the FIRST STONE commending it to the respect and protection of the American people in general, and the citizens of Westmoreland County in particular.
Bidding adieu to those who had received us so kindly, we reembarked, and hoisted our colors, and being provided with a piece of cannon and suitable ammunition, we fired a salute, awakening the echoes that had slept for ages around the hallowed spot.

Benjamin Lossing who visited around 1850 gives us this sketch of the stone laid by G. W. P. Custis.

This 1854 picture from Putnam's Monthly shows the stone in place on cliffs above the Potomac. 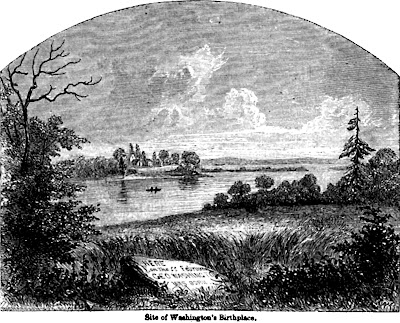 The stone was soon broken and had disappeared by 1870. Jessie C. Glasier wrote in  Home-Maker magazine in 1890 that, when she visited after a swimming expedition, only a few bits of "dim crumbling stone" could be found on the site. 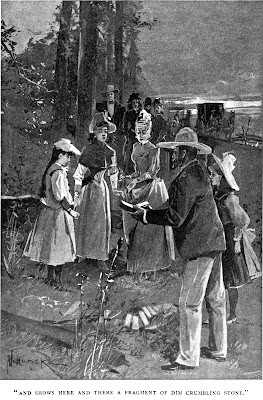 By then, plans were already in the works for a monument to mark Washington's birthplace. In 1879 and 1881, Congress authorized funds to build a monument. In the 1890's the Corps of Engineers found the foundation of a small house on the site of G. W. P. Custis's monument. Here's a sketch of the old foundation with the site of the Custis monument marked. 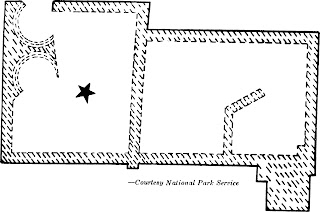 The new monument would be built on this site. This illustration of a proposed monument appeared in Century Magazine in 1892. 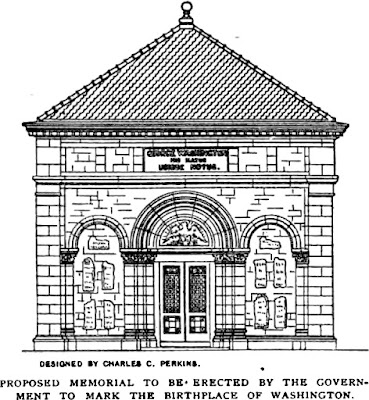 In 1896, the Defense Department erected a 51 foot obelisque on top of the foundation believed to be that of the Washington's house. 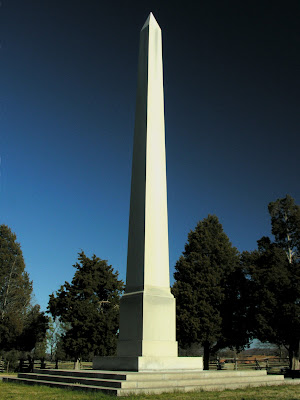 This plan from Harper's magazine 1899 shows the monument sitting on top of the old foundation. 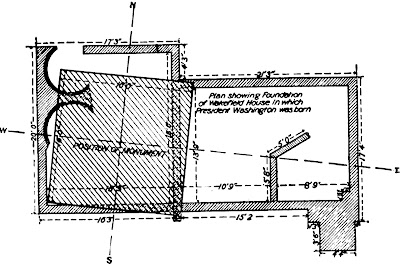 In the 1920's, a movement arose to build a replica of the Washington home on the old foundation. In 1926, Congress authorized the construction. Architect Edward W. Donn, Jr. designed  "...a typical house of a prosperous plantation gentleman of the period to which the original belonged, and follows the lines of the original foundations." But the foundation was too small so it was interpreted as a partial basement that only underlay part of the house. The obelisque was moved to the park entrance when the house was constructed.  Here is a photo of the dedication on the house in 1932. 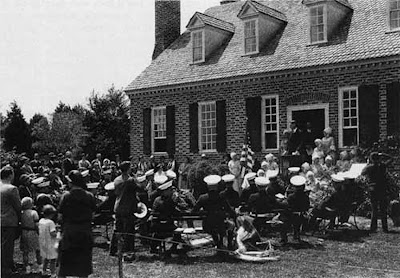 Eighteenth-century costumes and a military band enliven the June 14, 1932, dedication of Wakefield, a reinterpretation of George Washington's birthplace. Secretary of the Interior Ray Lyman addresses the crowd as National Park Service Director Horace Albright looks on from the doorway. The young girl in colonial dress to Lyman's left is Albright's daughter, Marian. Courtesy NPS History Collection. 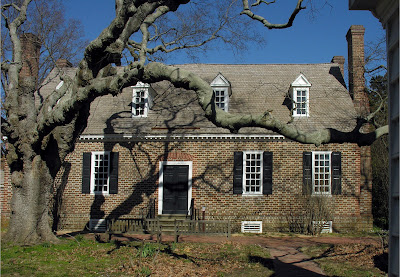 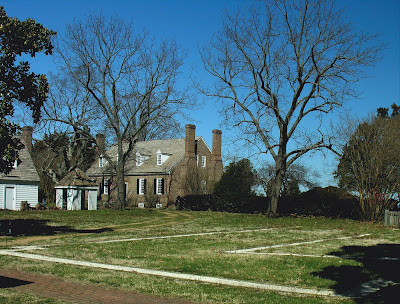 An interpretive sign describes the shape and growth of the house. 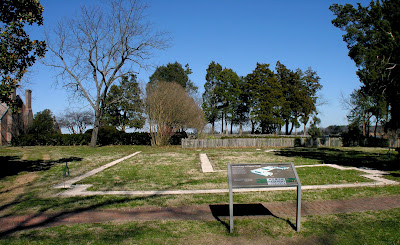 Most of what we know about George Washington's birthplace has come to us thanks to the archaeologist's trowel.

After generations of uncertainty about the location of the main plantation house, archaeologists excavated its foundations in 1936. They discovered a house built in many phases. At the time of George Washington's birth, probably only the central portion of the house existed. The addition of the wings - the last built in the 1760s - expanded the house to the dimensions you see marked on the ground before you.

Another sign identifies this as the footprint of the house in which Washington was born. 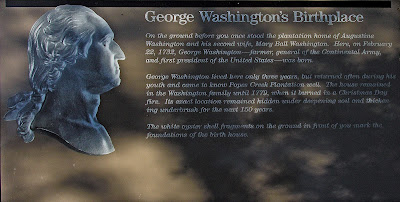 On the ground before you once stood the plantation home of Augustine Washington and his second wife, Mary Ball Washington. Here, on February 22, 1732, George Washington—farmer, general of the Continental Army, and first president of the United States—was born.

George Washington lived here only three years, but returned often during his youth and came to know Popes Creek Plantation well. The house remained in the Washington family until 1779, when it burned in a Christmas Day fire. Its exact location remained hidden under deepening soil and thickening underbrush for the next 150 years.

The white oyster shell fragments on the ground in front of you mark the foundations of the birth house. 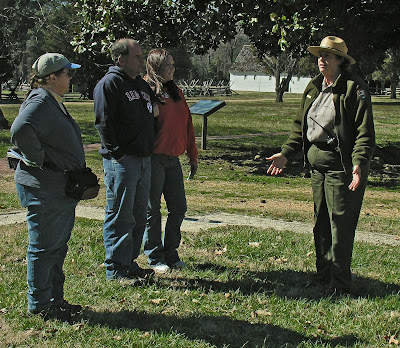 I don't know if that's supposed to be three-year-old Washington watching waterfowl off the cliffs. But I suspect the quote is from the Pater Patriae.

Waterfowl of the Potomac

To this day I recall a common event on the beautiful Potomac. Wild fowl at Winter camping and feeding on the wild celery and other aquatic plants, in some places covering the water for 2 miles or more.

Here were mighty flocks of wild Swan and Geese. Wild Ducks, canvasback, mallard, redhead, oxeye and dotterel rested on these waters. Whilst the wild Swan wheeled and trumpeted in the clear Winter air, the wing-sound of brant, sheldrake, teale and blewing was like a great storm descending upon the Potomac. I saw also widgeon, grebe and cormorant, even the common loon -- truly a feast for a young man's eyes!

On our early spring visit, we saw Tundra Swans in large numbers from the cliffs at George Washington's Birthplace State Park. And few beautiful if invasive Mute Swans. Jan took this shot of a Mute Swan. 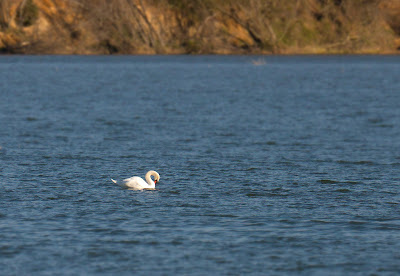