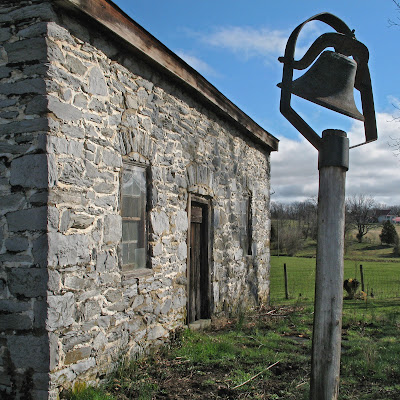 The home of Thomas, the 6th Lord Fairfax, at White Post, Virginia

Thomas Fairfax, 6th Lord Fairfax of Cameron, was the only resident peer in the Colonial America. In 1761, he moved to the backwoods of Virginia, from Belvoir near Mount Vernon. This portrait belongs to the Masonic Lodge in Alexandria, Virginia. 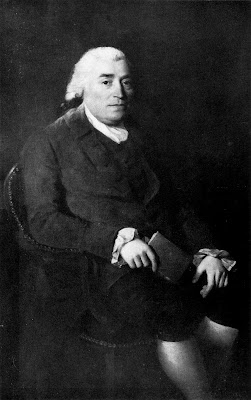 In London, Thomas Fairfax had been a member of a literary society. He was a friend of Addison and contributed to the Spectator. Legendarily, Lord Fairfax's retirement from society was caused by a disappointment in love; his fiancée married another man. He abandoned London for the new world in 1745 or so and went to live in America at Belvoir.  Louisa Bellet tells the story in her 1907 book, Some Prominent Virginia Families. 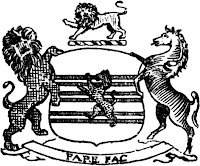 Thomas Fairfax, sixth baron, never married. He came of age to find that his mother had sold his paternal estates, including Denton Castle to secure intact her own inheritance, the Castle of Leeds in Kent, and he fell in love and all the preparations for the marriage were gayly in progress when the lady of his heart discovered his loss of patrimony and withdrew immediately from the engagement. Up to that time Thomas Fairfax had been a gay, light-hearted soldier in a swell regiment, the Life Guards, and a university man of scholarly attainments. Now, under this double blow, his life became embittered. He was obliged to ratify the sale of his property, but he never cared for the manors in Kent and estates in the Isle of Wight, inherited from his mother. He never forgave her action and when a blighted love affair was its culmination he resolved to visit America.

Fairfax soon moved his business headquarters to the Shenandoah Valley and moved there himself in 1761. James J. McDonald, in his 1907 book, relates the following "traditionary"  description of Lord Fairfax's life in Virginia.


Lord Fairfax had but little cultivated ground around his premises, and that was in small patches without taste or design. The land was left for a park, and he lived almost wholly from his rents. The following, as well as much of the foregoing, respecting him, Is traditionary: His lordship was a dark, swarthy man, several inches over six feet In height, and of a gigantic frame and personal strength. He lived the life of a batchelor, and fared coarse, adopting in that respect the rough customs of the people among whom he was. then In the humour, he was generous -- giving away whole farms to his tenants and simply demanding for rent some trifle -- for Instance, a present of a turkey for his Christmas dinner.

Fairfax hired the young George Washington to survey his western lands. This statue in Winchester portrays the young Washington as a surveyor. 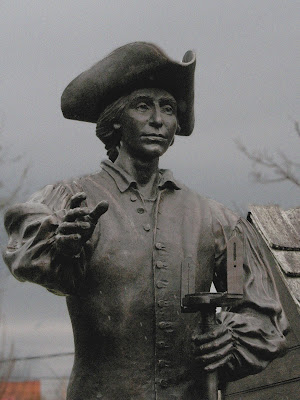 As heir to the Northern Neck Proprietary, Fairfax was lord of a substantial chunk of Virginia. This stone building, on the site of the property he called Greenway Court, is reputed to be his land office. 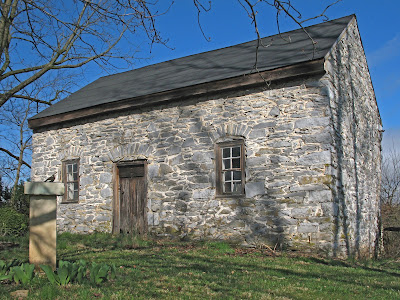 The 1940 Guide to the Old Dominion says this about the site.


GREENWAY COURT, formerly the wilderness manor of Thomas Lord Fairfax, master of the 5,000,000-acre proprietary of the Northern Neck. Only the LAND OFFICE remains of the structures erected by Fairfax in 1748. This little house, two low stories of gray stone, stands close to the highway at the edge of stony fields. Here quit rents were collected and here George Washington, the youthful surveyor for Fairfax, is said to have kept his instruments.

The house that Fairfax lived in at Greenway Court was intended to be a steward's house. The main house was to be built later, but was never built. This illustration is from the Magazine of American History, 1893. 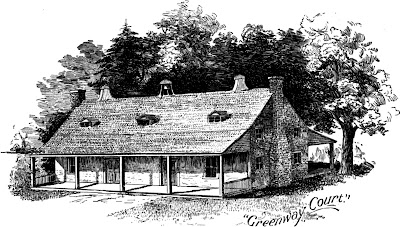 The National Register form describes the old house this way.


The main building was a story-and-a-half structure with long sloping roof in back and front. There were chimneys studded with swallow and martin coops at each end of the house. Two small belfries were evenly spaced on top of the roof in between the two end chimneys. The front roof was pierced by four dormer windows and sloped down in the old Virginia fashion into low projecting eaves that formed a verandah extending along the entire length of the house. From the flagstone pavement of this  porch one looked out across a terraced lawn to a green meadow and the Blue Ridge. Negro servants lived in log huts scattered about in the woods. The only other significant structure was the limestone Land Office, 28.4 ft. x 18.4 ft., where quit rents were received and land records kept.

This original house was torn down in 1834 after the roof collapsed. W. H. Snowden pictured it this way in his 1904 handbook, "Some Historic Landmarks...". 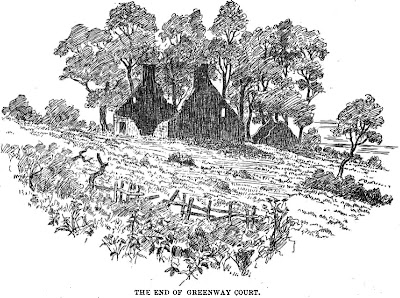 Before the old house disappeared, the Rev. Mr. Thomas Kennerly built a brick house in 1828 which still stands. 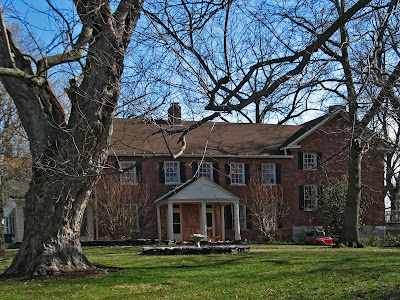 Henry Howe, in 1845, says that the old house "stood just in front of the modern brick dwelling of Mr. Kennerly." He further remarks as well that "There are now several of the original buildings standing at the place; among them is a small limestone structure, where quit-rents were given and titles drawn of his lordship's domains. Fairfax had, probably, 150 negro servants, who lived In log huts scattered about In the woods."

This old stable is said to have been built with stones from the old house: 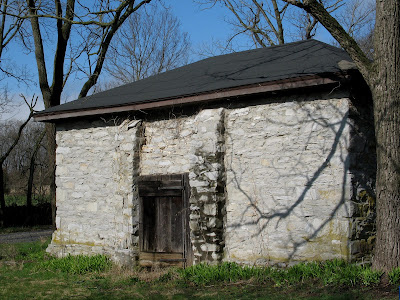 Samuel Kercheval et al., in their 1833 book, describe at length the chain of inheritance between Lord Fairfax and Rev. Kennerly. The childless Lord Fairfax left the large Fairfax grant to the Rev. Denny Martin in England who applied for and received the title Lord Fairfax. As to Greenway Court, Thomas Fairfax's heir was another nephew Col. Thomas Bryan Martin who left part of the property to the husband of his illegitimate daughter by Lord Fairfax's housekeeper. The rest he left to his own housekeeper, Miss Betsy Powell whose daughter, Ann Susan Carnegy, married Rev. Kennerly. 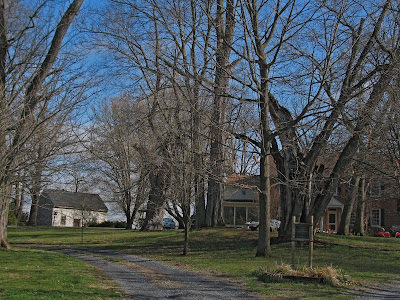 By 1960, the property belonged to J. C. Digges and sons. The Digges are decedents of the Kennerlys. In 1980, Greenway Court was designated a National Historic Landmark. 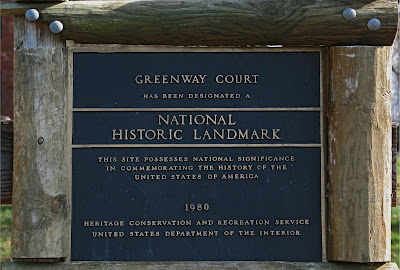 In 2003, an historic easement was established to preserve the site. 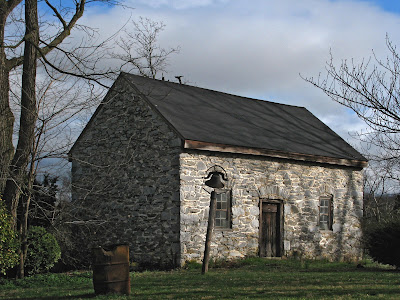 The Estate Office is described on the 1960 National Register Form this way:


The Land Office still stands. It was probably built in 1762, when the land records were transferred to Greenway Court. The door is made of hewn boards given double thickness by other boards laid diagonally on the inside and secured to those on the outside by hand-wrought clinched nails. The limestone walls, 28,4 ft. x 18.4 ft., are extremely thick. The four narrow windows are fitted with heavy wrought iron staples and hooks for the purpose of boarding up the windows at night. The fireplace has a triangular flagstone hearth. The building was restored in 1930, but has deteriorated since then with disuse.

When we visited in 2009, the double-thick door was rotting away at the bottom. 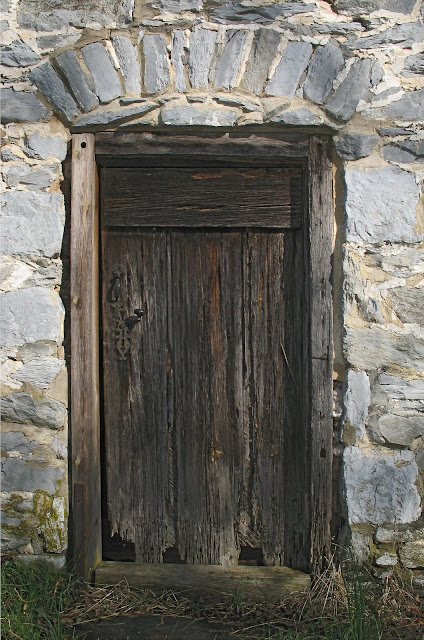 But the hardware was intact. 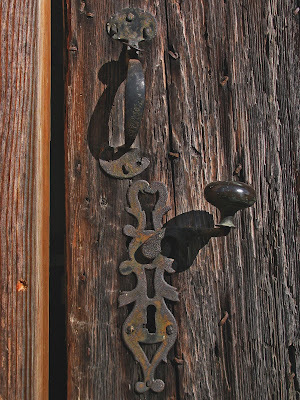 A window pane had fallen out of this window. 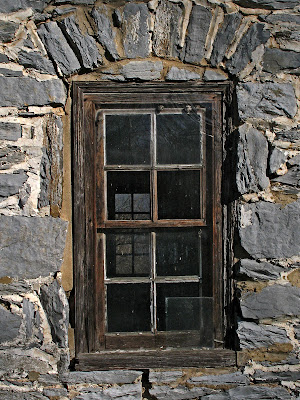 According to Martha Kennerly, this sundial was on the site in Lord Fairfax's day. 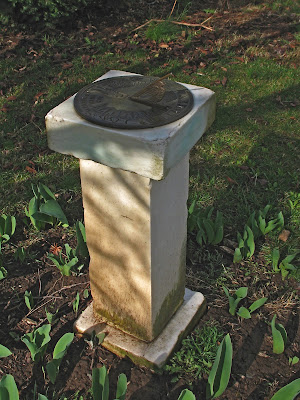 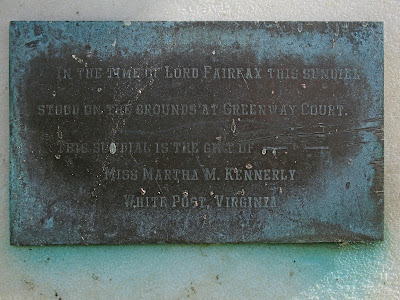 In the Time of Lord Fairfax This Sundial
Stood on the Grounds of Greenway Court.
This sundial is the gift of ---- ------
Miss Martha M. Kennerly
White Post, Virginia

﻿She may be referring to the the sundial stand because the sundial itself looks more modern than the brass plaque. As a metaphor for the passage of time, this artifact captures well the feeling of Greenway Court. 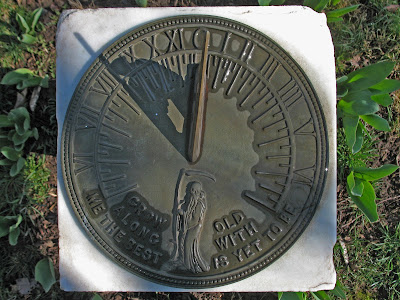