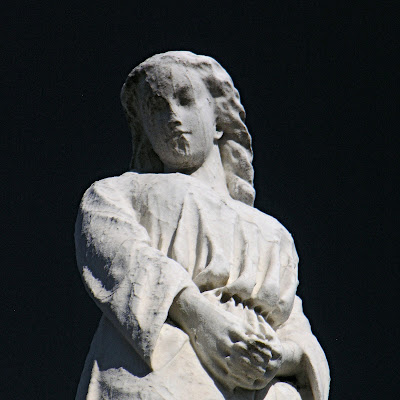 On a hot June Friday in 1864, 108 women worked in the four-room laboratory at the Washington Arsenal filling paper minie ball cartridges. They were, for the most part, young and poor. Half of them were Irish immigrants. One, Sallie McElfresh, was 13 years old. Mrs. Tippett, on the other hand, was 40. Young women were hired for the job of  "choking cartridges" even before the Civil War led to (male) labor shortages, because girls had small hands and fine motor skills. They were also better behaved than men. 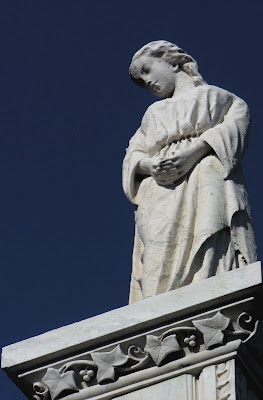 Their task was to assemble paper cartridges, carefully filling thin paper tubes with gunpowder, adding another paper tube containing the bullet, and then choking them off by making a complex series of folds in the end of the tube. This illustration from Harper's Weekly shows women engaged in this work at the Watertown Arsenal in Massachusetts. 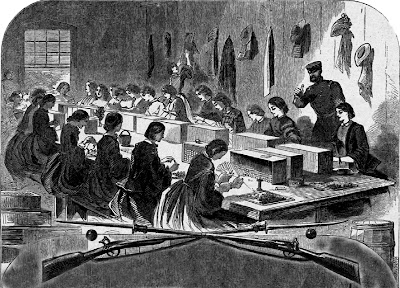 Filling Cartridges at the Watertown Arsenal

The finished cartridges looked like this one offered for sale by Gale River Traders. 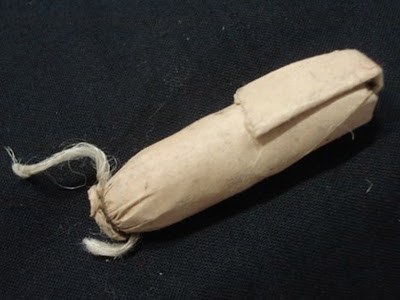 Their supervisor Thomas B. Brown had the official title Pyrotechnist. He had laid out "red stars," fireworks used as signal flares, in trays outside the window of the building where the women worked. The fireworks ignited in the hot sun, sparks came in through window and lit the gunpowder lying on the table. The resulting explosion and fire killed 21 of the 29 women in the room and severely injured the rest. The next day's Daily National Intelligencer described the "Terrible Calamity."

The scene was horrible beyond description. Under the metal roof of the building were seething bodies and limbs, mangled, scorched, and charred beyond the possibility of identification. Most of those who escaped -- about two hundred and fifty persons, mainly females, were employed in that building -- had fled shrieking away. Some fainted, and were with difficulty, restored, and some had after the first shock, returned to shriek over the fate of their companions; while an agonized crowd of relatives rushed to the spot to learn tidings of their daughters or sisters who were known to have been in the fated building.
Up to three o'clock eighteen or nineteen bodies had been taken from the ruins. They were so charred as to defy identification. The number could not be definitely ascertained, as the reader may know, when told that a half dozen of the bodies were put in a box about five feet square. Three women were taken out alive and placed in the hospital. Their names are Sally McElfresh, Anne Bates, and Rebecca Hull. Miss Bates is seriously burned that her recovery is doubtful. Sarah Gunnell escaped from the building, and, being terribly frightened, ran towards her home, which is on Four-and-a-half street, between Fifth and Sixth, but swooned away and died instantly; it is supposed from fright.

Greenleaf's Point at the confluence of the Potomac and the Anacostia had been set aside to be an arsenal in L'Enfant's plan in 1791. The U.S. Arsenal was built there in 1810.  The main building looked this way in Harper's Magazine in 1861. 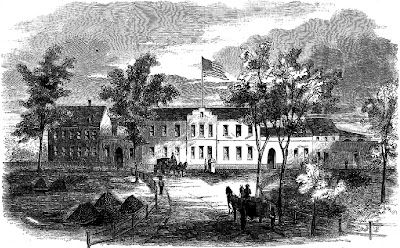 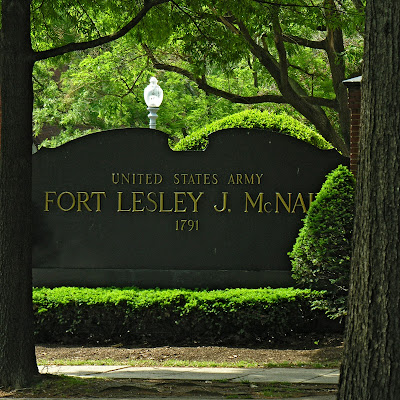 The arsenal fire is commemorated at the site of the arsenal by a marker entitled "Women War Workers 1861- 1865" at Fort McNair on 4th Avenue in front of Marshall Hall, housing the headquarters of The National Defense University and its library. 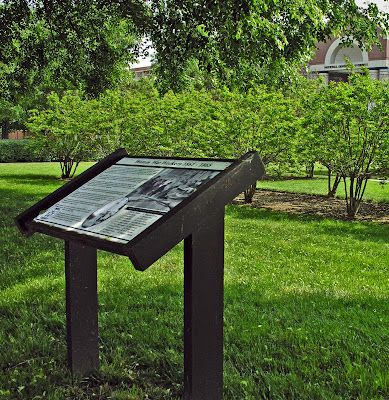 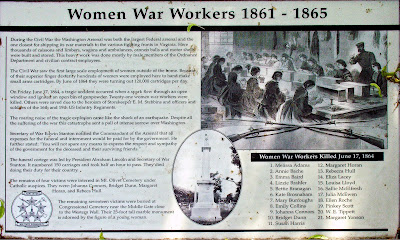 During the Civil War, the Washington Arsenal was both the largest Federal arsenal and the one closest for shipping its war materials to the various fighting fronts in Virginia. Here thousands of caissons and limbers, wagons and ambulances, cannon balls and mortar shells were built and stored. This heavy work was done mostly by male members of the Ordnance Department and civilian contract employees.
The Civil War saw the first large-scale employment of women outside the home. Because of their superior finger dexterity, hundreds of women were employed here to handmake small-arms cartridges. By June of 1864, they were turning out 120,000 cartridges per day.
On Friday, June 17, 1864, a tragic accident occurred when a spark flew through an open window and ignited an open bin of gunpowder. Twenty-one women war workers were killed. Others were saved due to the heroism of Storekeeper E.M. Stebbins and officers and soldiers of the 16th and 19th US Infantry Regiments.
The roaring noise of the tragic explosion came like the shock of an earthquake. Despite all the suffering of the war this catastrophe sent a pall of intense sorrow over Washington.
Secretary of War Edwin Stanton notified the Commandant of the Arsenal that all expenses for the funeral and internment would be paid for by the government. He further stated: "You will not spare any means to express the respect and sympathy of the government for the deceased and their surviving friends."
The funeral cortege was led by President Abraham Lincoln and Secretary of War Stanton. It numbered 150 carriages and took half an hour to pass. They died doing their duty for their country.
The remains of four victims were interred in Mt. Olivet Cemetery under Catholic auspices. They were: Johanna Connors, Bridget Dunn, Margaret Horan, and Rebeca Hull.
The remaining seventeen victims were buried at Congressional Cemetery near the Middle Gate close to the Western Wall. Their 25-foot tall marble monument is adorned by the figure of a young woman.

Four of the victims, Johanna Connor, Catherine Horan, Bridget Dunn and Catherine Hull had Catholic burials at Mt. Olivet Cemetery on Saturday the 18th of June.

A public funeral service was held at the arsenal on the 19th. Under a flag-draped canopy on a platform erected on the arsenal grounds were 15 neatly stained poplar wood coffins. The Washington Star on Monday, June 20, 1864 described the arrangements.

The remains of the fifteen dead, not removed, were enclosed in handsome coffins, silver mounted, with three handles on each side, and a plate on the breast, bearing the name of the inmate when known. The coffins were lined with muslin, and were made in the Arsenal carpenter shop, in which the remains were placed on Saturday morning when they were removed to the platform. The platform was about fifteen feet by twenty feet from the ground, covered with duck and trimmed with mourning. Over this was a canopy, draped with the American flag and mourning.
Under this canopy the coffins were placed -- eight containing the remains of those who could not be identified ranged along the north side of the platform, each bearing a label marked "unknown," and on the opposite side seven other coffins, with the names of each as follows, commencing at the east end with Annie Bache, Julia McCuin, Mrs. Collins, Elizabeth Branagan, Lizzie Brahler, Eliza Lacey and Maggie Yonson....
On the other side of the platform were the eight coffins, each marked "unknown."  Here the afflicted relatives gathered, passing excitedly along the line of coffins, eagerly scanning each, as if hoping in some possible way to be able to designate the one containing the remains of their own dead.

After the obsequies, a procession, said to be a mile long, containing 450 vehicles, moved toward Congressional Cemetery where the bodies would be buried. Each body had its own hearse. President Lincoln, Secretary of War Stanton, and Chief of Ordnance General Ramsey were among the dignitaries in attendence. On the way, the procession was joined by a fancy hearse bearing the coffin of Sallie McElfresh who had survived the immediate disaster but died later. "The procession moved up 4 1/2 street to Pennsylvania avenue, and at F street the funeral procession of Miss McElfresh ... joined in. The remains of Miss McElfresh were in a handsome coffin, covered with beautiful flowers..." Sally McElfresh was buried in the grave of her recently deceased father in Congressional Cemetery. The last coffin in line was that of Annie Bache who would be placed in her family vault in Congressional Cemetery.

A committee was quickly formed to provide a monument over the grave. In November 1864, the committee published an RFP to build the monument for $3,000. Irish sculptor Lot Flannery won the commission and produced this monument: 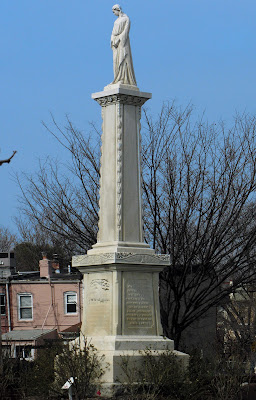 The monument faces south while most of the graves in this section of the Congressional Cemetery face east, so the statue seems to turn away from visitors. 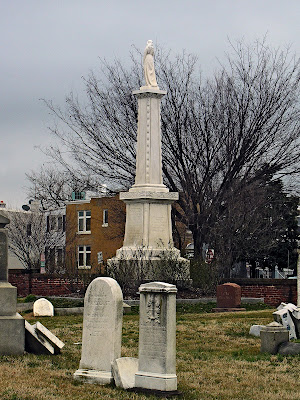 The front panel displays a bas-relief image of the explosion and an epitaph. Melissa Sheets explains the odd white "e" in Arsenal. "The word “arsenal,” originally misspelled, shows the crude correction of an inserted ‘E.’ The surrounding marble, discolored by time, further enhances the bone-white error." 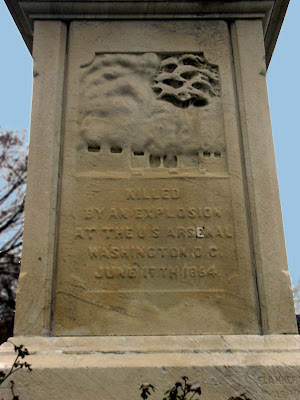 I did not recognize the subject of this image until I read that it was a representation of the arsenal on fire with smoke pouring out the windows. 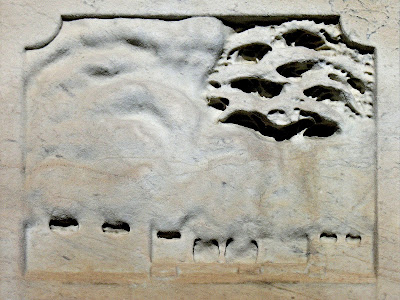 On the west and east panels are lists of victims almost as hard to see as the picture. Here's the list on the east face: 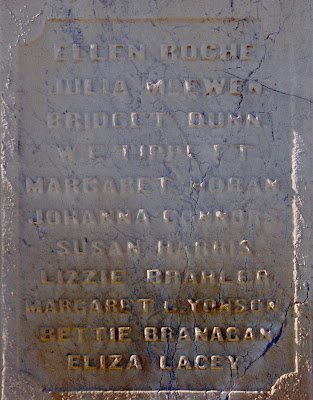 And here's the west face: 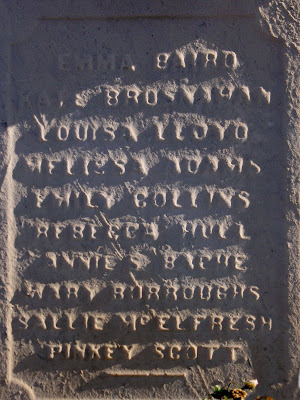 The north face says that the monument was erected on June 17, 1865, with public contributions. 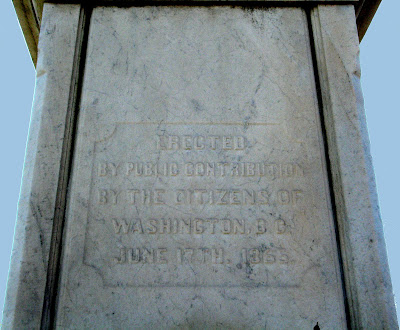 Erected
By Public ﻿Contribution
By the Citizens of
Washington D. C.
June 17th 1865

The winged hour-glass on the top of the base represents the transitory nature of life. 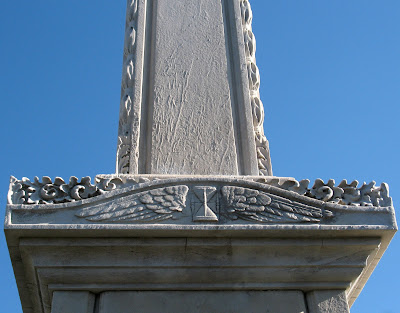 Grape leaves (which look like ivy to me) represent sacrifice. 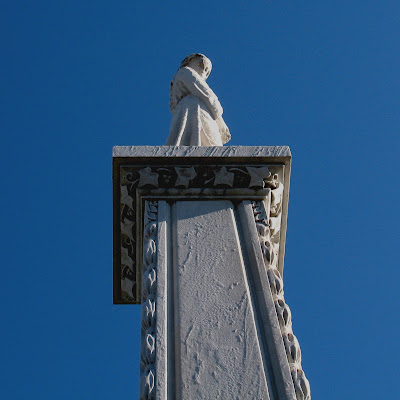 
Atop a twenty-foot shaft an allegorical figure of Grief stands in a rested contrapposto, clad in a simple peplos belted at her waist. Her hands are clasped below her waist as her head tilts to her right, eyes closed in sorrow, representing the national and familial feelings for the deceased. Weather and time have not been sympathetic towards the carved marble as Grief’s face displays streaks of water damage as if she really weeps for the victims. 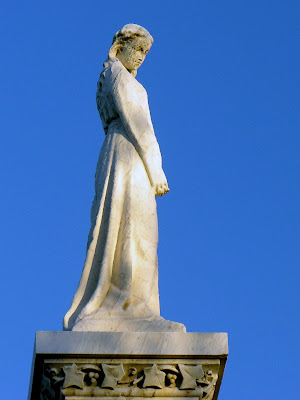 Sheets contrasts the classical garb of the statue with the hooped skirts worn by the women war workers that the coroner's report said contributed to their deaths. "The coroner believed that it was the metal hoop skirts worn by most of the women that 'caged' them and 'afforded facilities for the flames to fasten upon them with fatal effect.' As a result, some bodies were 'crisped quite bloodless.'" 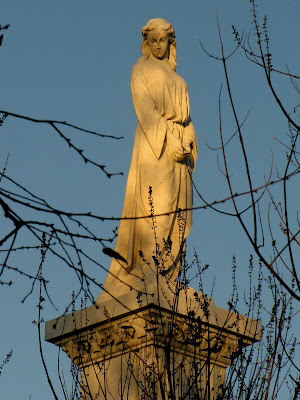 Here's the final list of victims from the signage at Fort McNair. 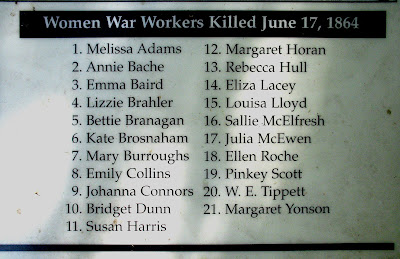