Beginning of the Territory of Columbia 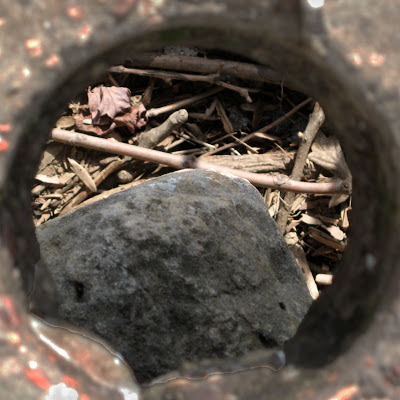 The south corner marker of the District of Columbia 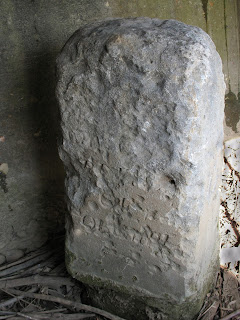 This stone embedded in the sea-wall of the old Jones Point Lighthouse, in the shadow of the Woodrow Wilson Bridge, marks the southern point of the 10-mile square of the District of Columbia. It was the point of origin for the 1791-2 survey of the District. The job fell to Andrew Ellicott and Benjamin Banneker to survey and mark the federal district. They set up an observatory here on Jones Point and eventually marked it with this stone. 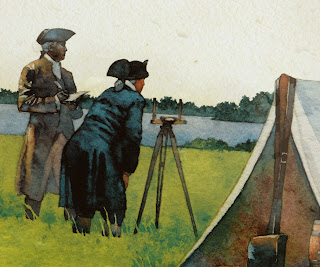 Ellicott and Banneker surveying at Jones Point
(from a nearby marker)

On  April 15, 1791, the southern corner stone was laid with Masonic Ceremony. When we visited on a rainy day in 1996, we discovered the stone in its locked concrete box in the wall. 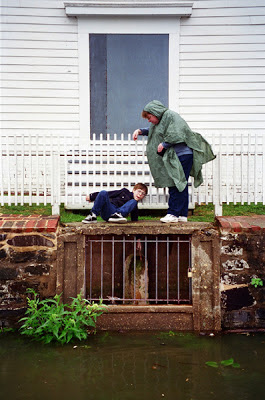 This colored version of a HABS drawing shows the stone in its niche in the sea wall in front of the lighthouse. 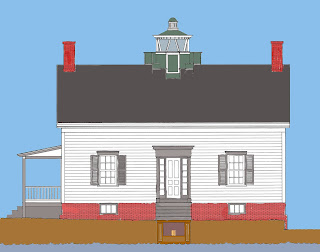 The stone was visible and reachable through a small hole in the sea-wall. We used Woodward's articles on DC boundary stones to find it. There was no signage except this DAR plaque. 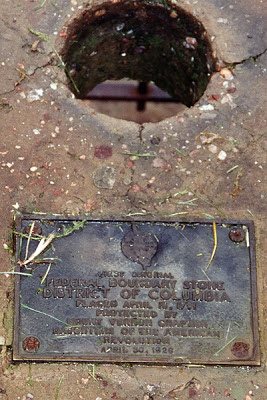 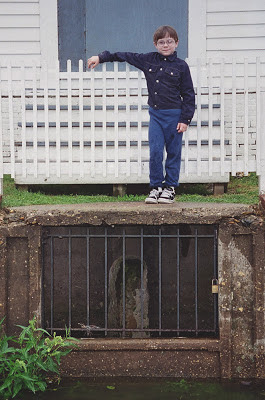 As part of the construction of the new Wilson Bridge, the site has been extensively re-developed and heavily interpreted by signage. But for 50 years, DC's south corner stone was lost.

The Jones Point lighthouse was built in 1855-6 just north of the boundary stone. In 1861, the stone disappeared from view, immured in the new concrete seawall in front of the lighthouse. Marcus Baker in his 1894 discussion of the DC boundary markers noted that:


This stone, still standing, though hidden from view, forms a part of the foundation wall of the lighthouse at Jones' Point, near Alexandria, Va. It is under the gateway in front of the south door of the lighthouse.  (National Geographic Magazine, Vol. VI, pp 149-178.)

In the early years of the 20th century, Fred Woodward, book buyer at Woodward and Lothrop, his family business, took on the task of finding the lost stone. In his 1907 article "With a Camera over the Old District Boundary Lines," he included this photo with a star drawn over the supposed location of the stone. 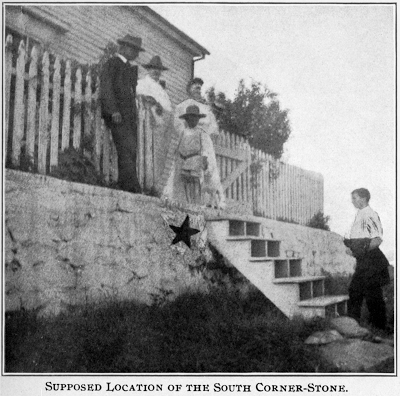 He provided this sketch map based on an old map supplied to him by lighthouse keeper F. E. Wilkins of the boundary and and the lighthouse grounds to show why he thought that was the location of the stone. 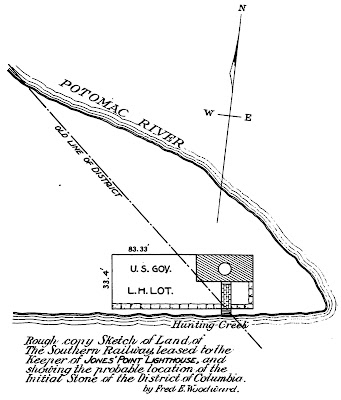 In 1911, a Washington Times article carried the news that Woodward had located the stone via a surveyors mark on the sea wall. 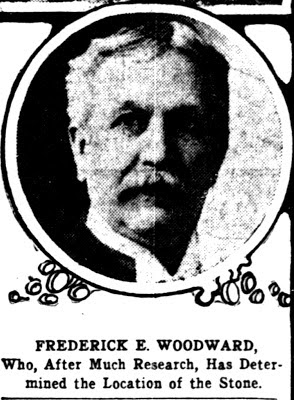 When the steps of the lighthouse were washed away in 1911, E. B. Greg found an arrow-shaped mark on the sea wall. Woodward recognized it as a mark made by C. H. Sinclair in 1884 to indicate the location of the south corner boundary stone.

Woodward wrote in his 1913 report to the Columbia Historical Society:


The discovery of this mark, which agreed so nearly with Mr. Sinclair's description, seemed conclusive to me that the long~looked-for stone had been definitely located, if not discovered, and I immediately took steps to secure the necessary authority to demolish a part of the wall, and bring once more to light this ancient landmark, this first tangible mark of an effort to implant in what was then a wilderness, the permanent boundaries of the future home of the infant republic.


Still further, the Engineer Corps has constructed a substantial niche or cage about six feet long and four feet in height and two and one-half feet in depth, covered with a broad concrete slab. This slab has a circular opening some six inches in diameter exactly over the center of the stone, making it accessible for surveyors. The opening in front of the stone measures four feet wide and two feet eight inches in height. The stone is slightly varied in shape from the remaining ones, being about eleven inches by nearly fourteen inches, instead of the usual twelve by twelve. About twenty-two inches of the stone is now above the surface of the ground, which at this point is beach sand.


Woodward includes this photo of the stone in its cage. 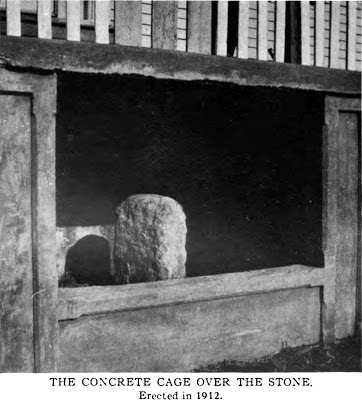 This 1921 photo appears on a new historical marker at Jones Point. I don't know who the clergyman is but the gentleman on the right is Fred E. Woodward. See HMdb. 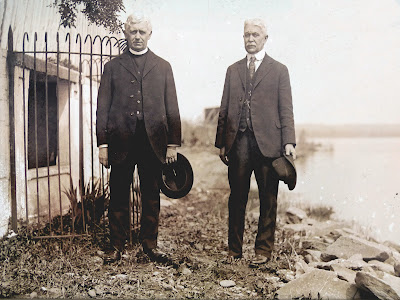 With water levels steadily rising, the cornerstone on Jones Point has long been at the mercy of encroaching Hunting Creek. In 1861, a retaining wall was constructed in front of the stone, creating a raised yard in the lighthouse constructed six years earlier. The stone remained "lost" behind this wall for over five decades. This 1921 photo was taken at a commemorative celebration following its "rediscovery."  Library of Congress image

In 1926, the DAR placed this plaque next to the hole above the stone. 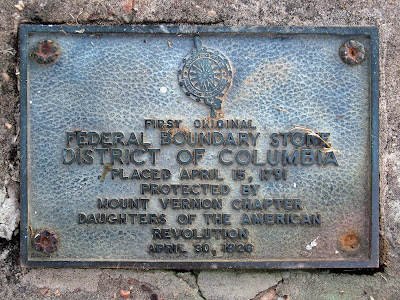 Today the round peep-hole has been replaced by this pyramidal window. Notice the brass lines that trace the old DC boundary lines that met here. 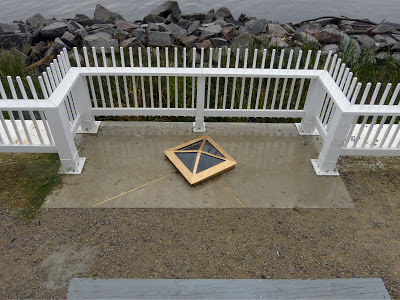 The stone can be seen behind my shadow in the window. 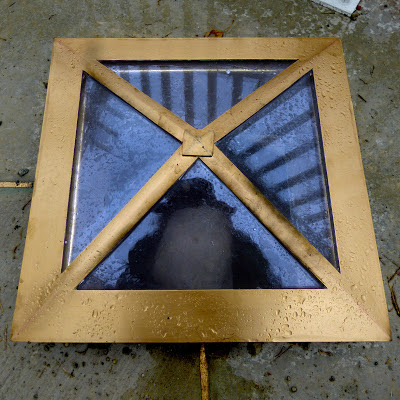 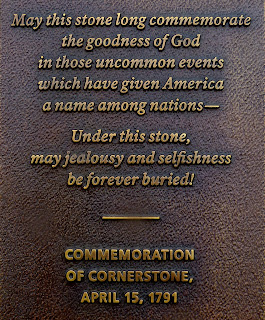 May this stone commemorate
the goodness of God
in those uncommon events
which have given America
a name among nations --
Under this Stone,
may jealousy and selfishness
be forever buried!
(Rev. James Muir at the dedication of the south corner boundary marker, April 15, 1791)
Posted by Allen Browne at 4:27 PM