Laugh and the World Laughs With You.... 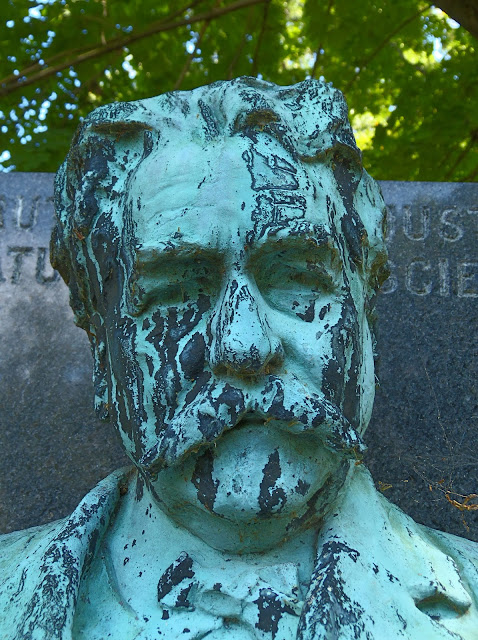 John A. Joyce stole a poem and took it to his grave.
In February of 1883, a young Wisconsin woman sold a poem to the New York Sun. Ella Wheeler received $5 for her poem "Solitude" which included a famous initial stanza. She included the poem in her book "Poems of Passion" in May of the same year. According to Martin Gardiner, "The book was roundly condemned as shameless eroticism, shocking everybody with such torrid lines as 'Here is my body, bruise it if you will'."

Laugh, and the world laughs with you;
Weep, and you weep alone,
For the sad old earth must borrow its mirth,
But has trouble enough of its own.
Sing, and the hills will answer;
Sigh, it is lost on the air.
The echoes bound to a joyful sound,
But are slow to voice your care.

Rejoice, and men will seek you;
Grieve, and they turn and go.
They want full measure of all your pleasure,
But they do not need your woe.
Be glad, and your friends are many;
Be sad, and you lose them all.
There are none to decline your nectared wine,
But alone you must drink life's gall.

Feast, and your halls are crowded;
Fast, and the world goes by.
Succeed and give, and it helps you live,
But no man can help you die.
There is room in the halls of pleasure
For a large and lordly train,
But one by one we must all file on
Through the narrow aisles of pain.

The poem came to Ms.Wheeler when she observed a crying young woman in black on a train and compared her own gaiety and society -- she was on the way to an inaugural  ball -- with the sadness and loneliness of the young widow. 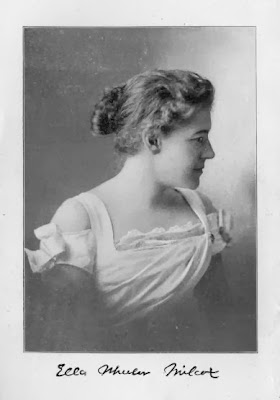 "She was the high priestess of platitude, and exalted commonplaces to the stature of genius." -- American Authors. (Wikipedia photo)

She became Ella Wheeler Wilcox when she married a silver salesman named Robert Wilcox in 1884.

Also in 1883, Colonel John A. Joyce published his memoir, A Checkered Life, in which he described his birth and childhood in Ireland, his Civil War service as the Colonel of the 24th Kentucky Infantry and his imprisonment for his role in the "Whiskey Ring" scandal that rocked the scandal-ridden Grant administration. 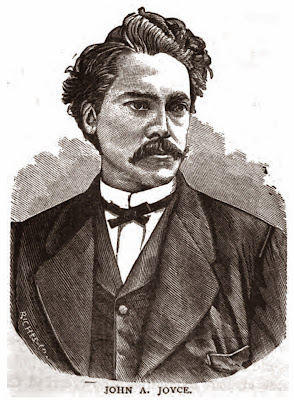 Joyce at the time of the Whiskey Ring Scandal.

Col. Joyce was one of two people who went to jail in the "Whiskey Ring" affair. He was pardoned in 1877. For a succinct biography of Joyce see his obituary in the Emmitsburg Democrat. 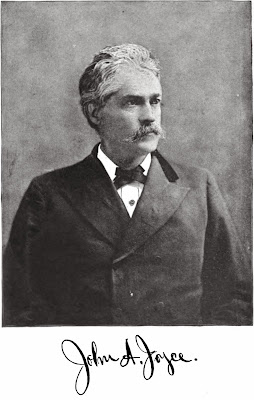 Frontispiece photo from A Checkered Life

Joyce appended some poems to the end of his book; "Poetic Waifs" he called them. "Solitude" was not among them. But in an 1885 edition, he added a poem called "Love and Laughter" which is nearly identical to Ella Wheeler Wilcox's poem; only the order of two quatrains and a few words differ. (See a side-by-side comparison here.)  In an 1895 book called Jewels of Memory, he claimed that he wrote the poem in 1863. He tells the tale that George D. Prentis, editor of the Louisville Journal, after several rounds of drinks challenged Joyce to write a poem on the spot. Joyce claimed that "Love and Laughter" was his answer to that challenge, which he wrote "within fifteen minutes" on a barrelhead in the wine room at the Old Gault House. 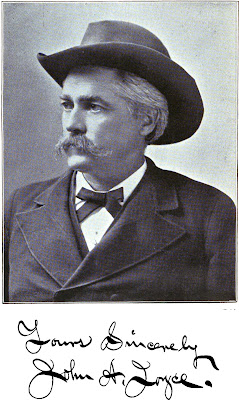 Frontispiece photo from Jewels of Memory

Mrs. Wilcox was justifiably horrified that her now famous poem had been stolen. She said in her book, The Worlds and I, that:

My husband wished to start a suit for damages, but was urged by acquaintances to drop it, as they said the general impression of Mr. Joyce was that he was "a harmless old lunatic whose words no one took seriously." But Mr. Joyce proved himself seriously annoying up to the day of his death. He never allowed more than two years to pass without finding some obscure paper in which he could again set forth his claims to my poem. I repeatedly made an offer of $5,000.00 to be given to charity, when anyone could produce a copy of "Solitude" published prior to February, 1883. I finally offered to present to any charitable institution he might select, in his name, that amount of money, when Mr. Joyce produced his proof. Of course it was never forthcoming; and yet he claimed the poem had been in circulation for twenty years before I wrote it.

The National Tribune headlined her 1885 letter to them, "Mrs. Ella Wheeler Wilcox lifts the Scalp of Col. Joyce." In this letter she refers to Joyce as a "voleur hardi" and says:


Were I a man I should quickly settle the matter by thoroughly caning Col. Joyce until he retracted his foolish falsehood. But being a woman my only defense is my pen.

The legend was kept alive by essayist Eugene Field who never missed an opportunity to "defend" Mrs. Wilcox in a most scathing manner.

Mrs Wilcox is perhaps the most touchy person in American literature at the present time. For a number of years she has been contributing to the newspaper press of the country and her verses have been subjected to the harshest sort of criticism....

Now this Joyce affair is simply preposterous we do not imagine that there is in America at the present time an ordinarily intelligent person who has ever believed for one moment that Colonel Joyce wrote the poem in question -- the poem entitled “Love and Laughter.” Colonel Joyce is an incorrigible practical joker and his humor has been marvellously tickled by the prodigious worry his jest has cost the Wisconsin bard. The public understands the situation; there is no good reason why Mrs. Wilcox should fume and fret and scurry around all on account of that poem like a fidgety hen with one chicken. Her claim is universally conceded; there is no shadow of doubt that she wrote the poem in question, and by becoming involved in any further complication on this subject she will simply make a laughing stock of herself; we would be sorry to see her do that.

This was not Joyce's only literary jape. In his rambling biography of Edgar Allan Poe, he claimed that "The Raven" had been cribbed from an Italian poem "The Parrot," written in Italian by a man named Penzoni, in 1809. Joyce claimed to have had drinks with Penzoni's grandson who sent him an English translation of the poem.  (Read more about "The Parrot" here.)  Going further down the rabbit hole, Edward Oldham suggested that "The Raven" and "The Parrot" are based on a 2nd century BCE poem by a Chinese poet, Kia Yi (貢誼). Joyce's reply is basically "We all do it."


Joyce appears in Ambrose Bierce's Devil's Dictionary in the definition of "success":

SUCCESS, n.
The one unpardonable sin against one's fellows. In literature, and particularly in poetry, the elements of success are exceedingly simple, and are admirably set forth in the following lines by the reverend Father Gassalasca Jape, entitled, for some mysterious reason, "John A. Joyce."

The bard who would prosper must carry a book,
Do his thinking in prose and wear
A crimson cravat, a far-away look
And a head of hexameter hair.
Be thin in your thought and your body'll be fat;
If you wear your hair long you needn't your hat. 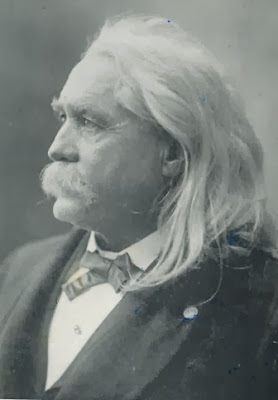 Joyce gave a handwritten copy of "Love and Laughter" to the Occidental Restaurant in Washington along with a photo of himself and his tombstone, telling the owners that it was the original 1863 manuscript of the poem. Bonnie Crenshaw of the Miami News wrote in 1949 that:


The hoax might have gone on forever had it not been for a recent radio quiz program. One woman who heard a prize given for naming Ella Wheeler Wilcox as the correct author, came in the {Occidental} restaurant,  saw the discrepancy and called it to the attention of the manager, The manager called the Library of Congress feeling confident his claim would be verified. But alas, when the report came in the library said 'No.'

The photo accompanying the manuscript may have been this one that appeared in the Washington Evening Star in 1915. 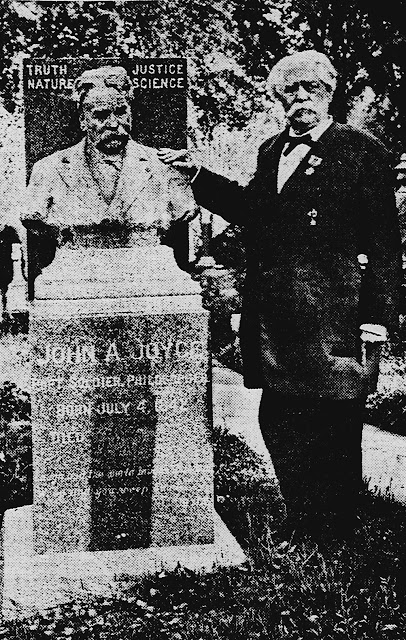 “Spread golden flowers on my life,
And do so very often;
I'll need them in my daily strife
But not upon my coffin.”
Toward the end of his life, Joyce mounted a campaign to raise a monument to himself in the form of a fancy tombstone mounted with a bust of himself. In 1913, he sent around a letter asking for money for that purpose.

My Dear Friend:
A number of my literary admirers have joined to purchase a lifelike bronze bust of this author from the noted sculptor, Jerome Connor, the artistic model of which was recently exhibited in the Corcoran Art Gallery, and knowing our friendship for my poetic and literary renown, may I ask you for a cash subscription of ____ dollars?

How much more sensible It will be for the public to honor Its poets and heroes while living than to monument them long after death when they cannot hear or feel the applause of mankind!

Spread golden flowers on my life.
And do so very often.
I'll need them in my daily strife
But not upon my coffin!

The Washington Times carried this cartoon lampooning Joyce's effort to memorialize himself. The headline of another times article was appropriately "Col. John A. Joyce to lie at Oak Hill." 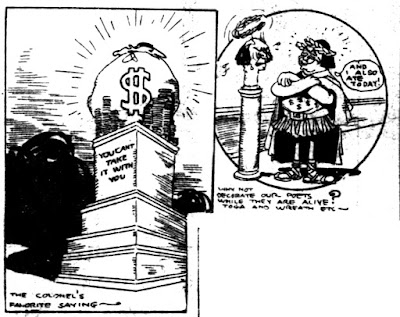 "You can't take it with you", The colonels favorite saying. -- Why not decorate our poets while they are alive? Toga and wreath, etc.

As the photo above shows he was successful in having his tombstone in Oak Hill Cemetery erected while he was still alive. On the face of the monument he prominently displays the famous lines from the poem he stole from Ella Wheeler Wilcox. 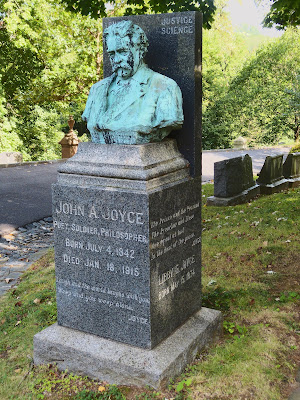 The famous lines also appear on the front of the bust itself sculpted there by Jerome O'Conner. 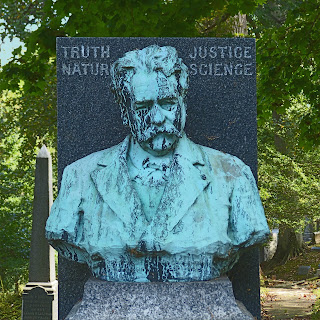 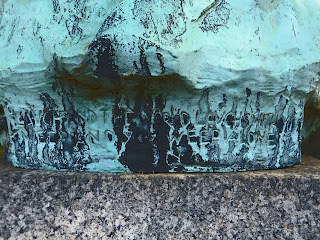 Another Joyce-ism appears on his monument, the refrain from Joyce's poem "There's No Pocket in a Shroud".

Ella Wheeler Wilcox outlived John Joyce by a few years, but the Kentucky Colonel got the last laugh. 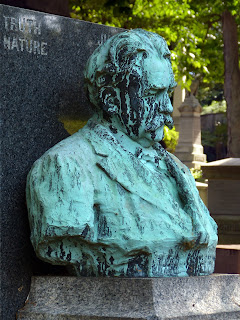 His tombstone is a landmark in the historic Oak Hill Cemetery (Lot 444 East), where a section is named "Joyce".