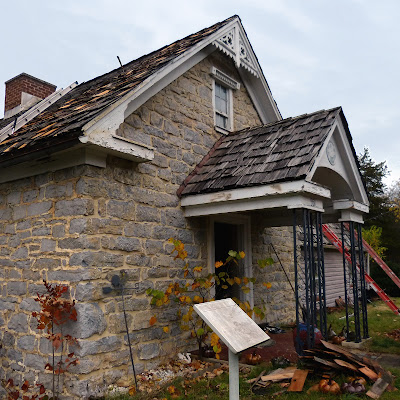 The Frontier Fort in Strasburg, Virginia

There are two historical markers at 551 N. Massanuttan Street. The most recent one shown above is nearly unreadable. 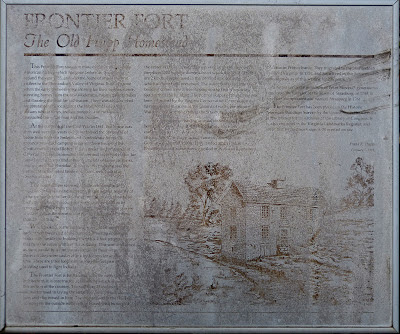 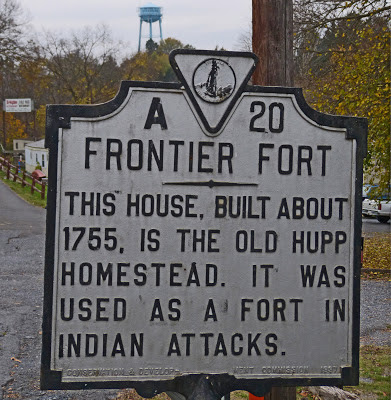 A-20
Frontier Fort
This house, built about 1755, is the old Hupp Homestead.
It was used as a fort in Indian attacks.

Frank Hupp installed and wrote the other marker in 1991. Fortunately, Roger Dean Mayer took a readable picture of the marker in 2006 and posted it in the HMDB. The text is nearly identical to a pamphlet written by Frank Hupp and tells the story of Hupp House in his words. 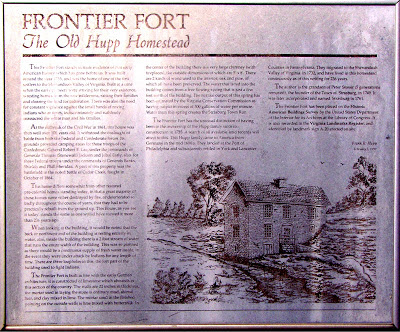 This Frontier Fort stands in mute evidence of that early American history which has gone before us. It was built around the year 1755, and was the home of one of the first settlers to the Shenandoah Valley of Virginia. Built at a time when the early pioneers were striving for their very existence, wresting homes from the raw wilderness, raising their families, and clearing the land for cultivation. There was also the need for constant vigilance against small bands of roaming indians, who at times indiscriminately and ruthlessly massacred the white man and his families.

At the outbreak of the Civil War in 1861, this house was then well over 100 years old. It withstood the onslaught of battle from both the Federal and Confederate forces. Its grounds provided camping areas for those troops of the Confederate General Robert E. Lee, under commands of Generals Thomas (Stonewall) Jackson and Jubal Early, and also for those Federal troops under commands of General Banks, Shields, and Phil Sheridan. A part of this property was the battlefield in the noted Battle of Cedar Creek, fought in October of 1864.

This home differs somewhat from other restored pre-colonial homes standing today, in that a great majority of these homes were either destroyed by fire, or deteriorated so badly throughout the course of years, that they had to be practically rebuilt from the ground up. This house, as you see it today, stands the same as one would have viewed it more than 240 years ago.

When looking at the building, it would be noted that the back or northwest end of the building is resting entirely in water. Also, inside the building there is a 2 foot stream of water that runs the entire width of the building. This was so planned as there would be a continuous supply of fresh water inside, in the event they were under attack by Indians for any length of time. There are three loopholes in this, the fort part of the building used to fight Indians. 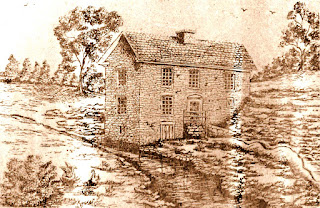 The Frontier Fort is built in line with the early German architecture. It is constructed of limestone which abounds in this section of the country. The walls are 22 inches in thickness; the mortar used in laying the stone is ordinary mud, animal hair, and clay mixed with lime. The mortar used in the finished pointing on the outside walls is lime mixed with buttermilk. In the center of the building there is a very large chimney (with fireplaces), the outside dimensions of which are 5'x 8'. There are 2 kinds of wood used in the interior, oak and pine, of which all have been preserved. The water that is fed into the building comes from a free-flowing spring that is just a few feet north of the building. The normal output of this spring has been estimated by the Virginia Conservation Commission as having an output in excess of 300 gallons of water per minute. Water from this spring creates the Strasburg Town Run.

The Frontier Fort has the unusual distinction of having been in the ownership of the Hupp family since its construction in 1755. A search of all available land records will attest to this. This Hupp family came to America from Germany in the mid-1600's. They landed at the Port of Philadelphia and subsequently settled in York and Lancaster Counties in Pennsylvania. They migrated to the Shenandoah Valley of Virginia in 1732, and have lived in this homestead continuously as of this writing for more than 240 years.

The author [of this brochure] is the grandson of Peter Stover (five generations removed), the founder of the Town of Strasburg, in 1749. It was later incorporated and named Strasburg in 1761.

The Hupp house has been placed on the National Register of Historic Places and on the Register of Historic American Building Survey by the United States Department of the Interior for its Archives at the Library of Congress. Also, it is listed in the Virginia Landmarks Register, and identified by landmark sign A-20 erected on the site.


North Massanuttan Street is the name taken by the Valley Pike as it becomes a street in the city of Strasburg, Virginia. This was the "Warrior's Path" or the "Great Wagon Road" in the 18th century and has been U.S. Rt. 11 since 1926. Cool Spring Road preserves a bit of the old pike.  In 1755, the French and Indian War was on; Washington had ambushed French troops under Joseph Coulon de Jumonville in June of 1754. Braddock was defeated at Fort Duquesne in July of 1755. 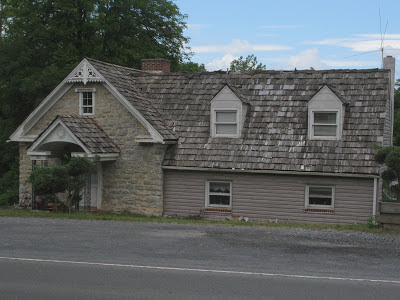 It is likely that this 1755 "Frontier Fort" was so called because it was surrounded by a palisade wall of wooden stakes. 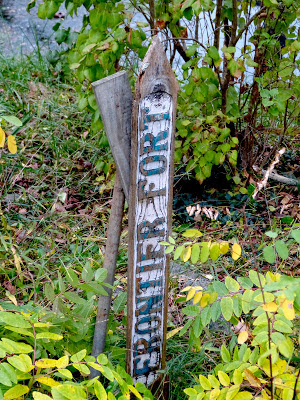 The house is built right into the spring pool of the Town Creek which rises here and flows through Strasburg to the Shenandoah River. Some of the water from the spring is diverted into the house to provide a secure water supply in case of attack. 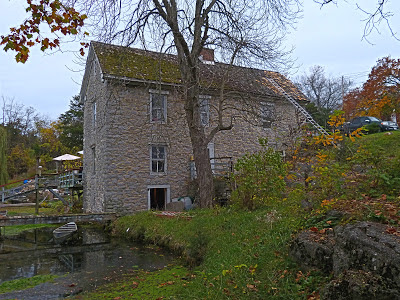 The small windows on the lower level of the Hupp house have been thought to be loop holes for rifles, but they are more likely just small windows. The National Register form points out that ".. it seems more likely ... that the wall slits were intended primarily for ventilation rather than for military purposes. Apart from the fact that their inward slope would have made them impractical for defense, similar slits appear in stone buildings constructed long after the threat of Indian attack had passed." Here one of the "port holes" in the wall of Hupp house stands above the trough through which water from the spring flows through the house. 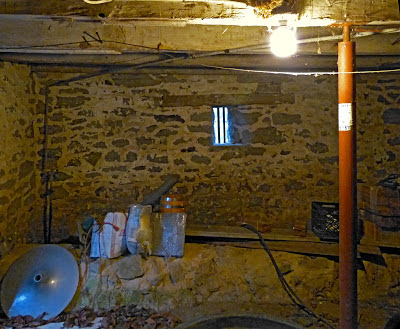 Franklin (Frank) Rowe Hupp was a lieutenant in the police department at Dulles Airport in Fairfax, Virginia, who was born in 1923 and died in 2002. His son, John, was replacing the cedar shingles on the Hupp house when I dropped by in 2012. 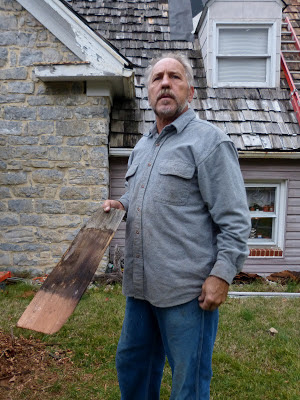 Frank Hupp's father was Bruce Hupp who made a business of raising watercress in the spring and founded the tourist attraction at Crystal Caverns on Hupp's Hill just up the old pike in the 1920's. 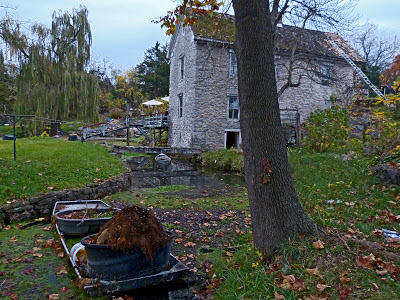 The old Hupp Distillery building sits nearby but is no longer Hupp property. In our visit in the summer of 2010, Jan and I found Prickly Pear cactus (Opuntia humifusa) blooming by the side of the old pike at Hupp House. 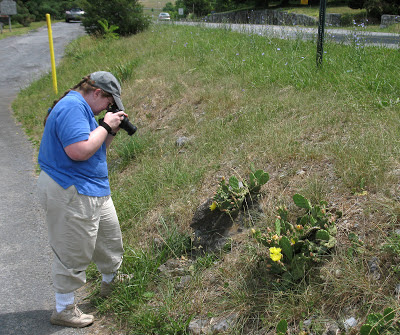 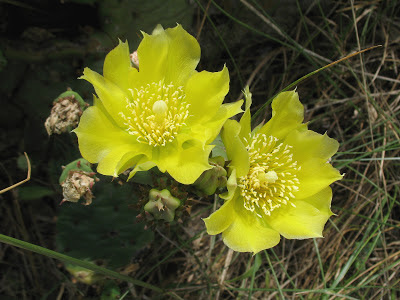