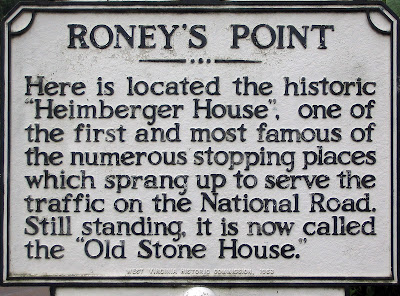 The Old Stone Tavern on the National Road

This 1963 WVA Historic Commission marker begins in the middle of the story.

Here is located the historic "Heimberger House", one of the first and most famous of the numerous stopping places which sprang up to serve the traffic on the National Road. Still Standing, it is now called the "Old Stone House." 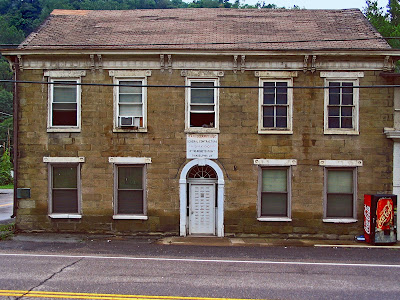 The Old Stone Tavern at Roney's Point in the West Virginia panhandle has been a stop on the way west since the National Road passed through here in 1806. The road was authorized by Congress as part of the 1803 admission of Ohio as a state. Henry Clay successfully lobbied to have the road cross the Ohio River at Wheeling, ten miles west of here. The National Register Form suggests that the tavern was built by Ebenezer McKinley on land he bought in 1804 for $500 and sold to Ninian Beall in 1819 for $3,500. Or it may have been built by Beall himself. This is not the Ninian Beall who was a Cornet in the battle of Dunbar in 1650 and was a founder of Georgetown; it's the Ninian Beall who was born in 1775 and died in Licking County, Ohio, in 1848.

Searight in his 1894 book, The Old Pike, describes the tavern's role as a stage coach stop in the early part of the 19th century, the "palmy days" of the old National Pike:

Roney's Point is next reached, a stage station ten miles from Wheeling. The original owner of the land was Roney, and its peculiar conformation, a high ridge ending in a point on the south side of the road, gave it the name of Roney's Point. It is a familiar name, and was a lively place during the palmy days of the road. On the north side of the road, at Roney's Point,  a large stone tavern was kept by one Ninian Bell, prior to the year 1828. He was succeeded by James Beck, Mrs. Sarah Beck, Moses Thornburg, and Jacob Beck, in the order named. James and Jacob Beck were not relatives. The old Simms line of stages stopped at this house when it was kept by James Beck, and it was the stopping place of the Good Intent line, when kept by Jacob Beck.


He gives us this picture of Sarah Beck, tavern keeper. 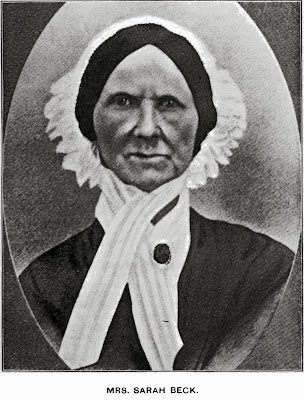 Cast iron semi-obelisk mile markers were forged by John Snowden's Brownsville Pennsylvania foundry and placed along the National Road from Brownsville to Wheeling in 1830. This one is in nearby Valley Camp. 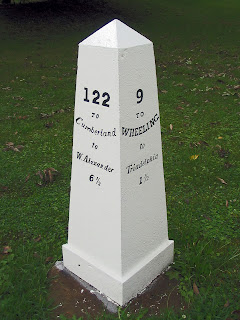 August Heimberger rented the "Old Stone Hotel" at Roney's Point in 1869 and kept the hotel for 22 years. His wife took over on his death in 1889 and continued the business until 1892. Italianate decoration was added to the old federal style building in the 1870's. Newton, Nichols and Sprankles  History of The Panhandle described Roney's Point this way in 1879:


Coming to Roney's Point also now on the Hempfield railroad we find quite an ancient village. There is here a very good hotel named the Heimberger House originally erected in 1820 on the right of Roney's old tannery an early settler after whom the place was named. This village stands on little Wheeling creek and is much better supplied than Triadelphia with water as that place has no stream running immediately through it...There are only a few houses scattered around but no church in the village. There is one store and a blacksmith and wagon shop with post office.

The old stone house survived as a tavern into the 20th century and witnessed the revival of road travel in the Automobile Era. Robert Bruce touring manager of the American Automobile Association included this J. K. Laycock photo of the old tavern in his 1916 book, The National Road. 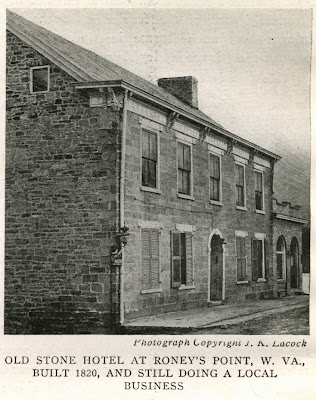 Notice the beer sign on the near corner of the building. 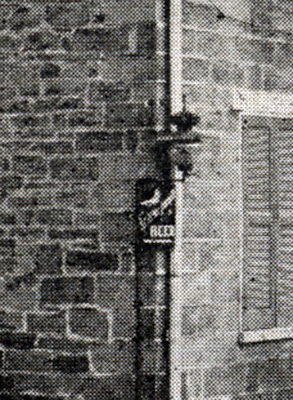 Motor Age magazine noted in 1918 that before West Virginia passed state-wide prohibition, this tavern provided a drinking place in the vicinity of dry southern Pennsylvania counties.


WEST VIRGINIA has been "dry" since July, 1915, prior to which time the motorist or other traveler, say from the direction of Pittsburgh, having passed through a ''local option'' district of southwestern Pennsylvania, such as the vicinity of West Alexander has been for years, could quench his thirst at a certain hotel just across the West Virginia line. Naturally the place came to be quite widely known the "Golden Gate," though its former brand of hospitality is now a thing of the past.

They published a nearly identical Laycock photo sans beer sign and contrasted it with the one that appeared in Bruce's book.


A photograph of the old stone tavern at Roney's  Point, on the way from the site of the "Golden Gate" to Wheeling, taken about three years ago to illustrate an historic narrative showed, even more plainly than was desired, a sign indicating the presence of liquid refreshments. But things have now changed, and the sign has disappeared, along with thousands of others throughout the State. 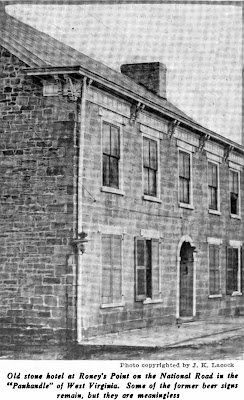 Old Stone hotel at Roney's Point on the National Road is the "Panhandle" of West Virginia. Some of the former beer signs remain, but they are meaningless.

In 1912, the DAR began a project to mark and improve a string of historic trails such as the Santa Fe Trail and the Old National Road as a "Coast-to-Coast" highway to be called the "National Old Trails Road" running 3,000 miles from Washington, DC, to Los Angeles, California. Plaques like this one, placed in 1921 on the Old Stone Tavern and the Madonnas of the Trail, are reminders of this early automobile era route. 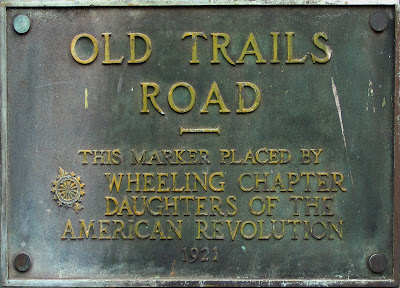 In 1922, Frank Ehrhart built the Stone House Auto Court next to the old tavern, and in 1926 the Old National Road became part of U.S. Route 40.


The original owner of this postcard stayed in the motel on the 26th of August 1930 and marked an X over the room in which he or she stayed. It shows both the Old Stone House Tavern and the Stone House Motel. 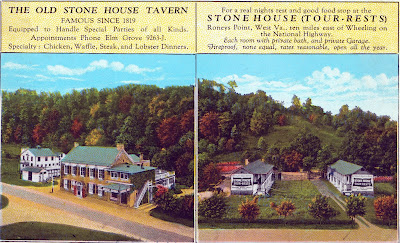 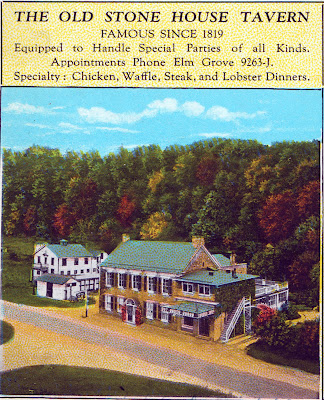 The 20-room motel provided a private room with a private garage and steam showers for automobile age travelers. The motel consisted of two block and stucco buildings facing each other across a courtyard. Each room had a garage underneath.The billboards on the building ends promise "Dancing Every Night/Good Food." 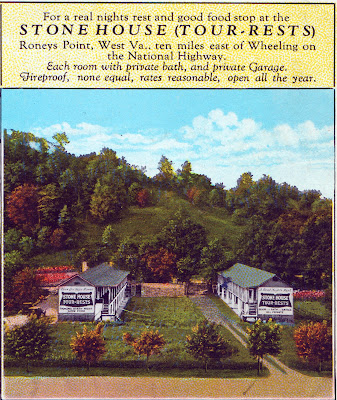 For a real nights rest and good food stop at the
Stone House (Tour-Rests)
Roney's Point West Va. ten miles east of Wheeling on
The  National Highway.
Each room with a private bath, and private Garage.
Fireproof, none equal, rates reasonable, open all year. 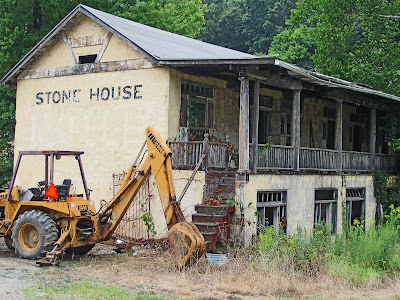 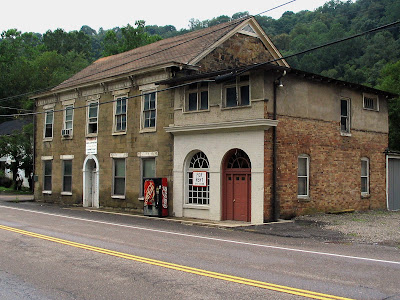 A grey cat peered out of a window surrounded by Italianate architectural detail above the fan window over the front door. 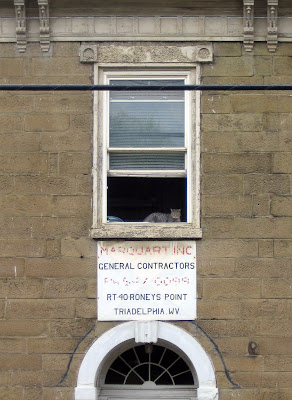 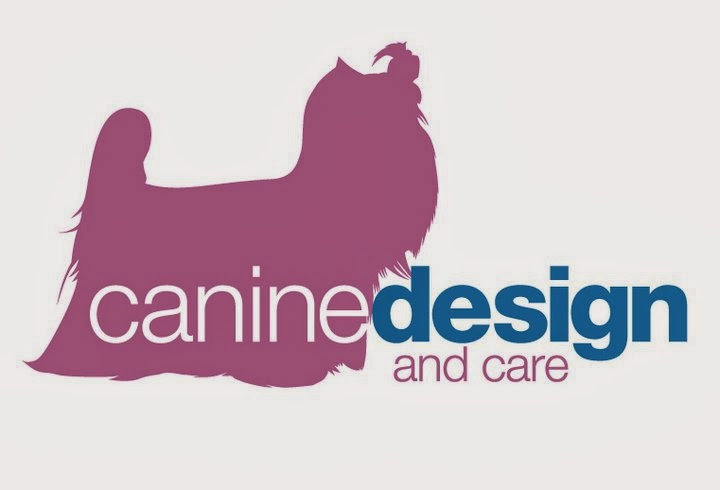 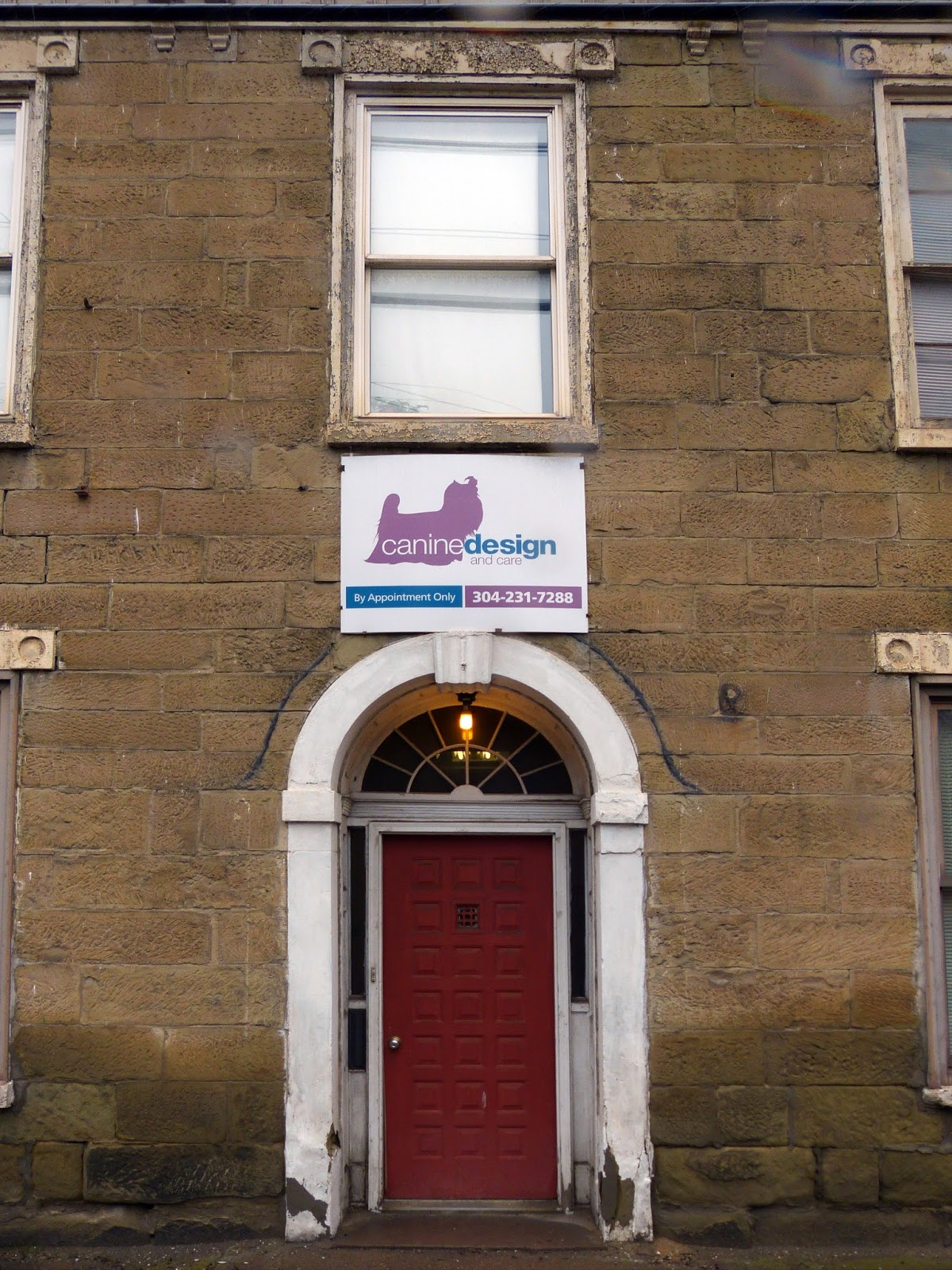 The low west wing is occupied by Guttman Advertising: 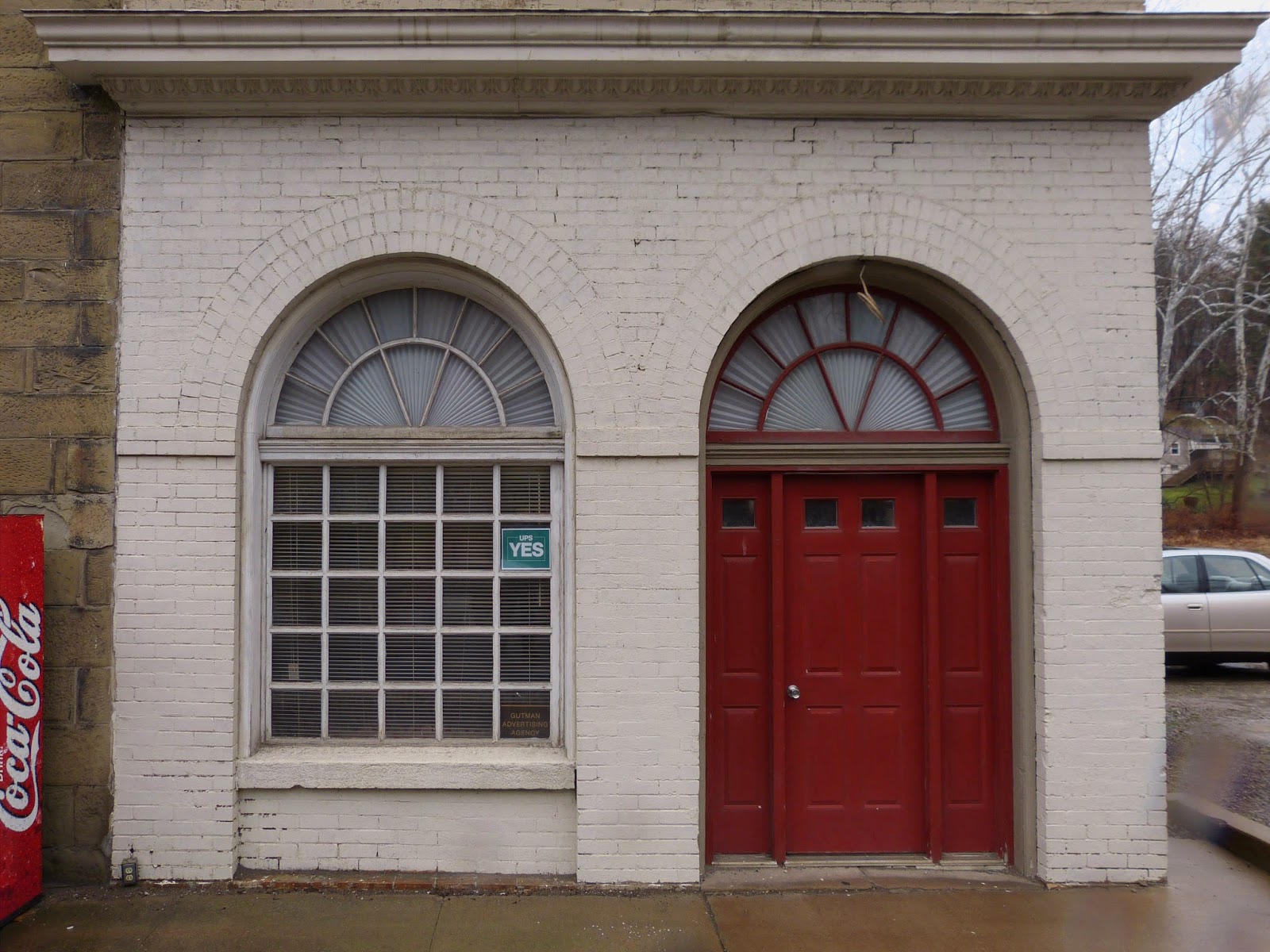 And the remnants of the Stone House Motel are gone, torn down in the summer of 2013 according to a passing local informant. 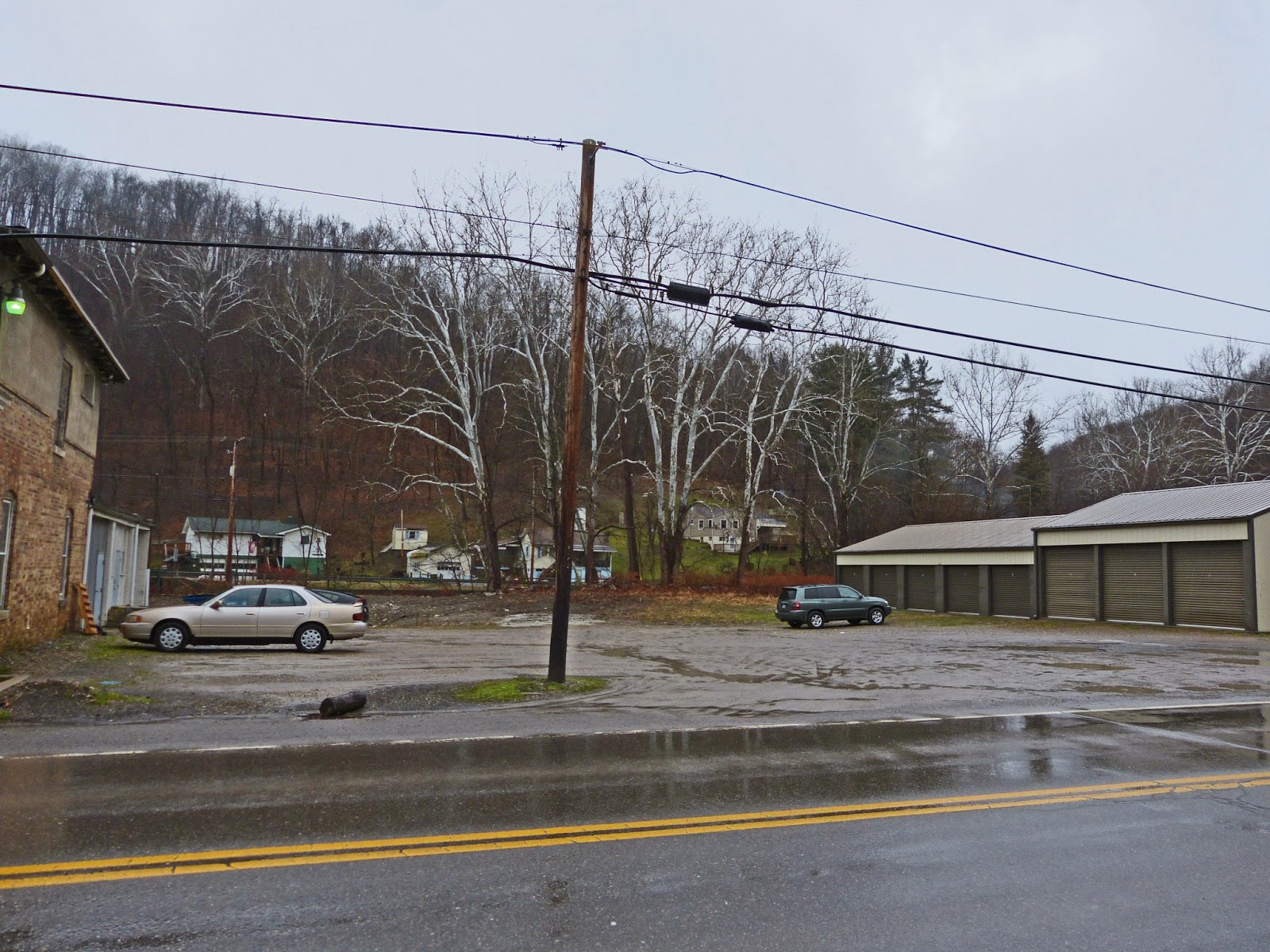