Wheeling was the Capital of Virginia

During the Civil War, the capital of Virginia was the city of Wheeling in the northern panhandle of what is now West Virginia.

From June 1861 to December 1863, the government of Virginia met in the old Custom House in Wheeling. 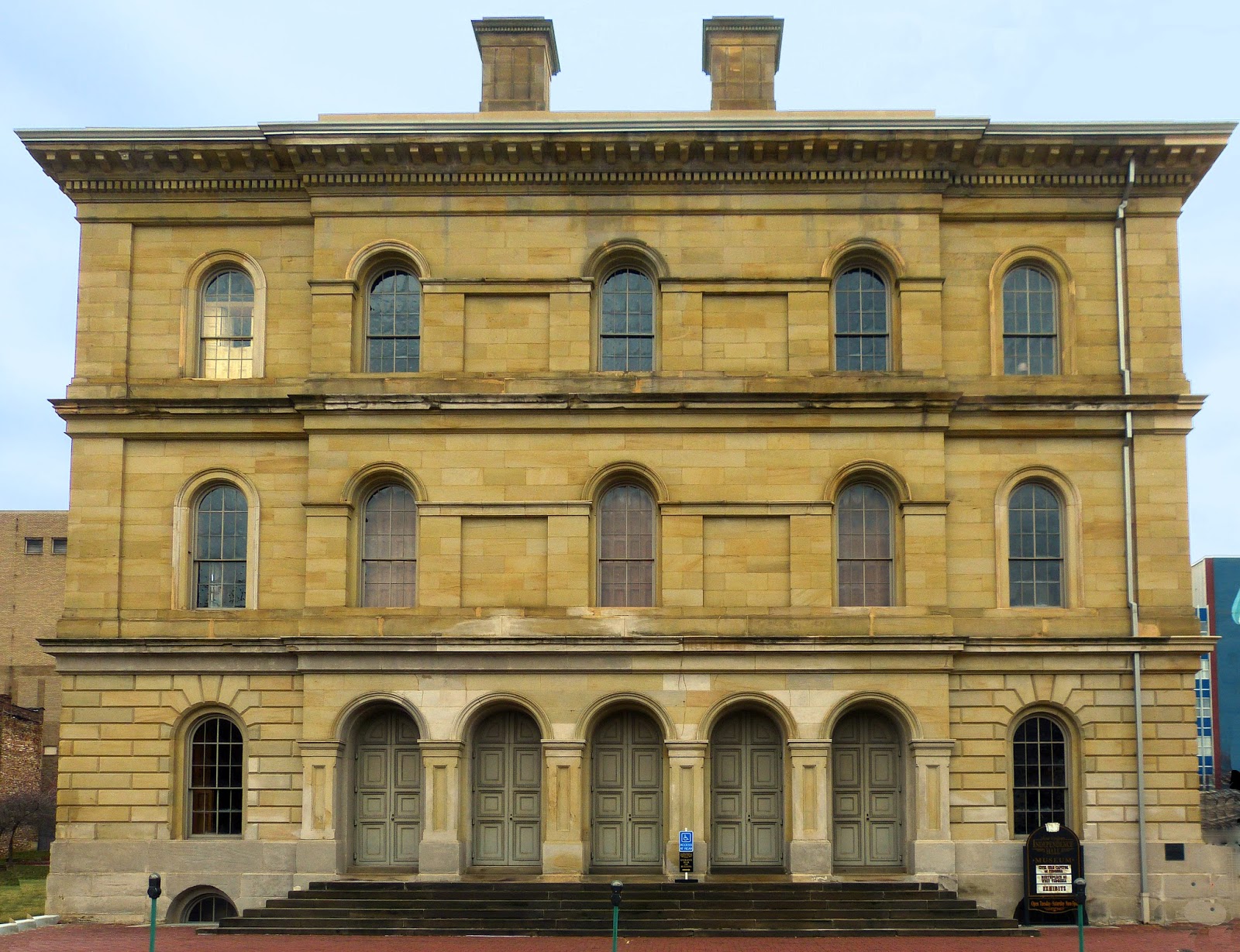 When the government of Virginia in Richmond seceded from the Union in 1861, the state's loyal citizens met in Washington Hall in Wheeling on May 13-14, 1861, to discuss the situation. Washington Hall was located where the Laconia Building is today at Market and 12th Streets in Wheeling. 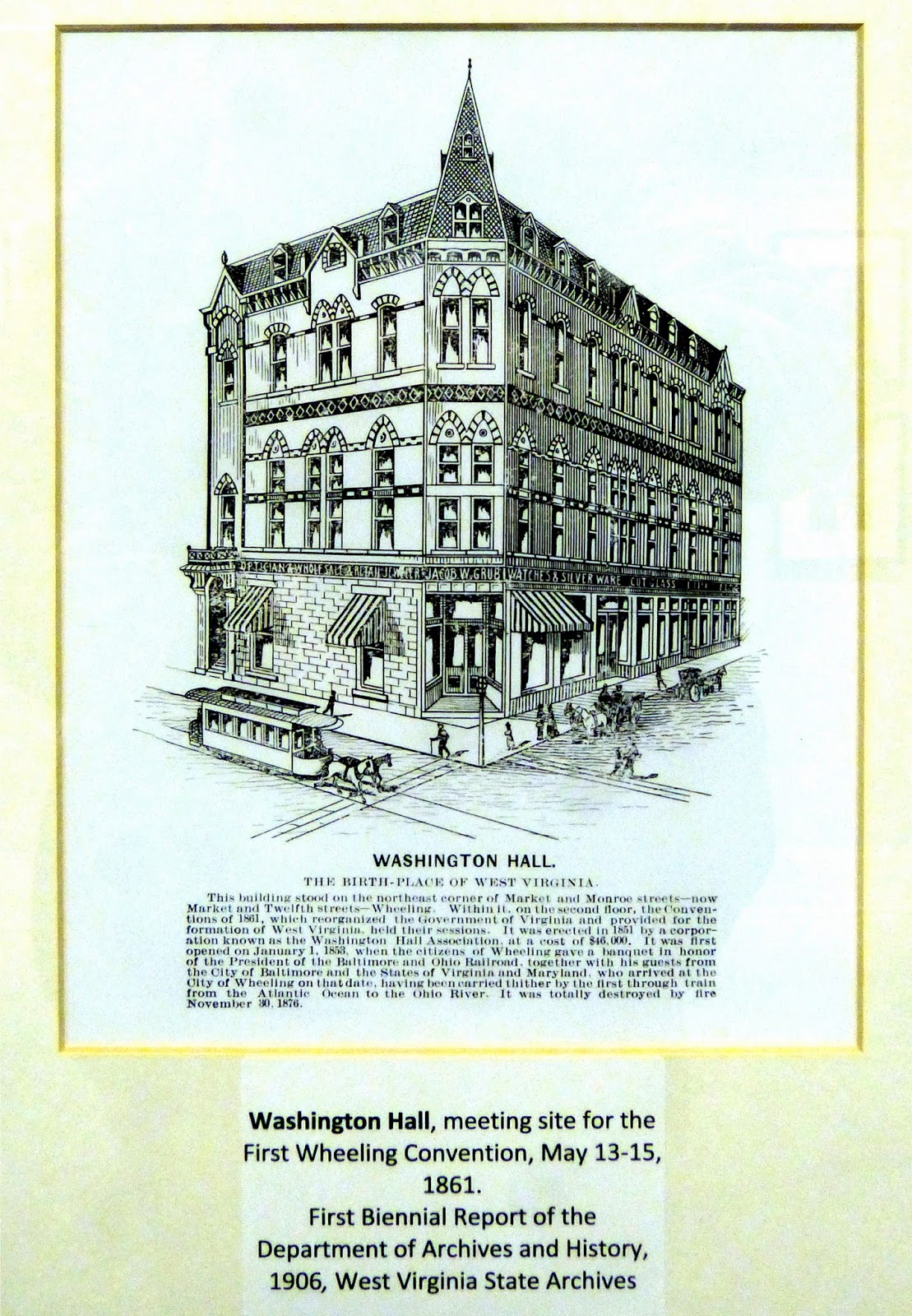 "This building stood on the northeast corner of Market and Monroe streets -- now Market and Twelfth streets -- Wheeling. Within it, on the second floor, the Conventions of 1861, which re-organized the Government of Virginia and provided for the formation of West Virginia, held their sessions. It was erected in 1851 by a corporation known as the Washington Hall Association, at a cost of $46, 000. It was first opened on January 1853, when citizens of Wheeling gave a banquet in honor of the President of the Baltimore and Ohio Railroad, together with his guests from the City of Baltimore and the States of Virginia and Maryland, who arrived at the City of Wheeling on that date, having been carried thither by the first train from the Atlantic Ocean to the Ohio River. It was totally destroyed by fire November 30, 1876."


The feelings of these loyal Virginians on the subject of Southern Secession is well expressed by this cartoon.


The second Wheeling Convention met on June 11 in the Federal Custom House, and on June 20th declared the secession of Virginia from the Union to be illegal, null and void.

This banner erected by the art store next to  the old Custom House illustrates the scene.


Leslie's published this picture of the Custom House with the U.S. flag flying over it. 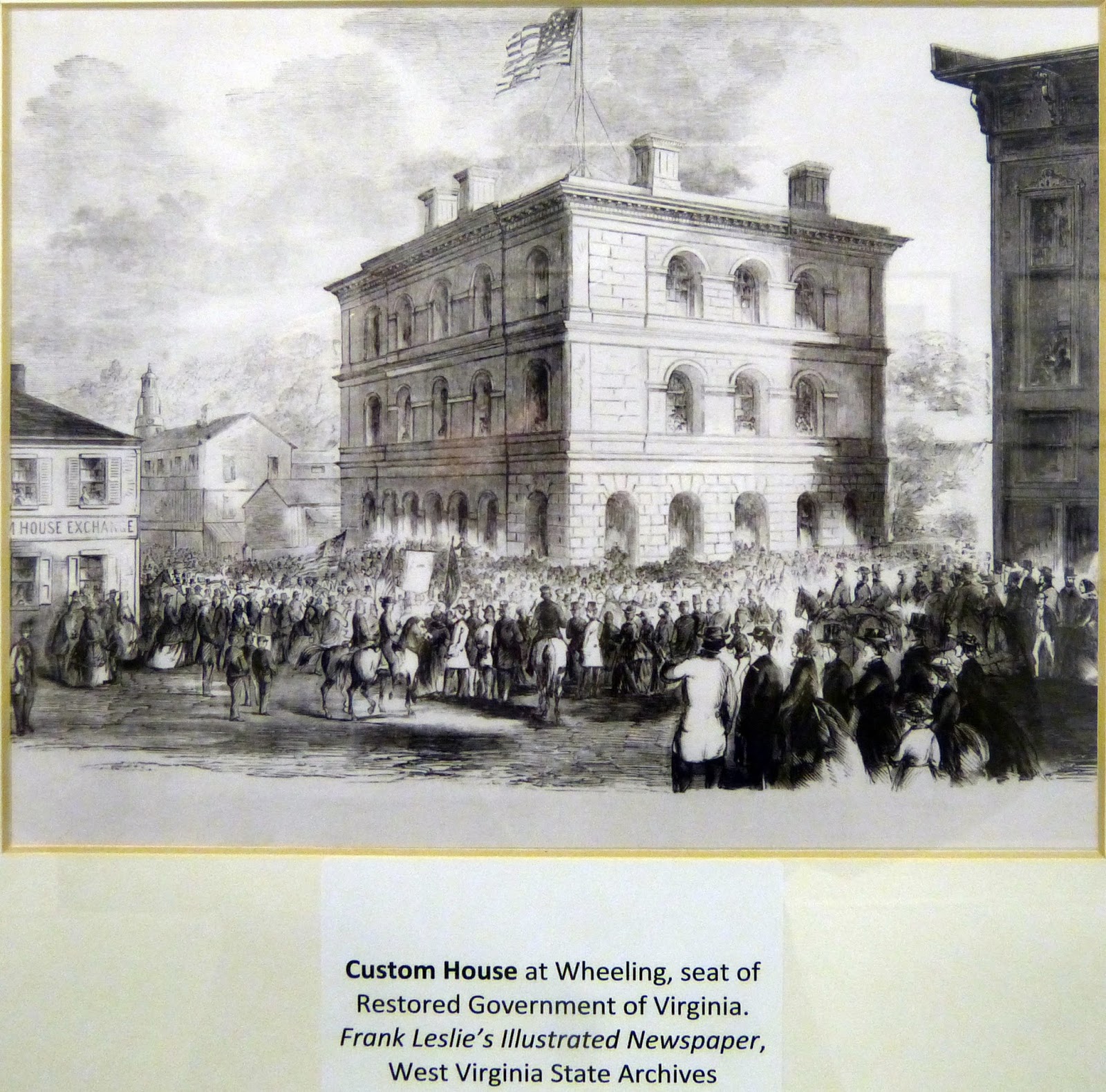 Today, the building is a museum known as West Virginia Independence Hall.

Harper's had this picture of the constituent convention of Virginia in the Custom House in Wheeling. 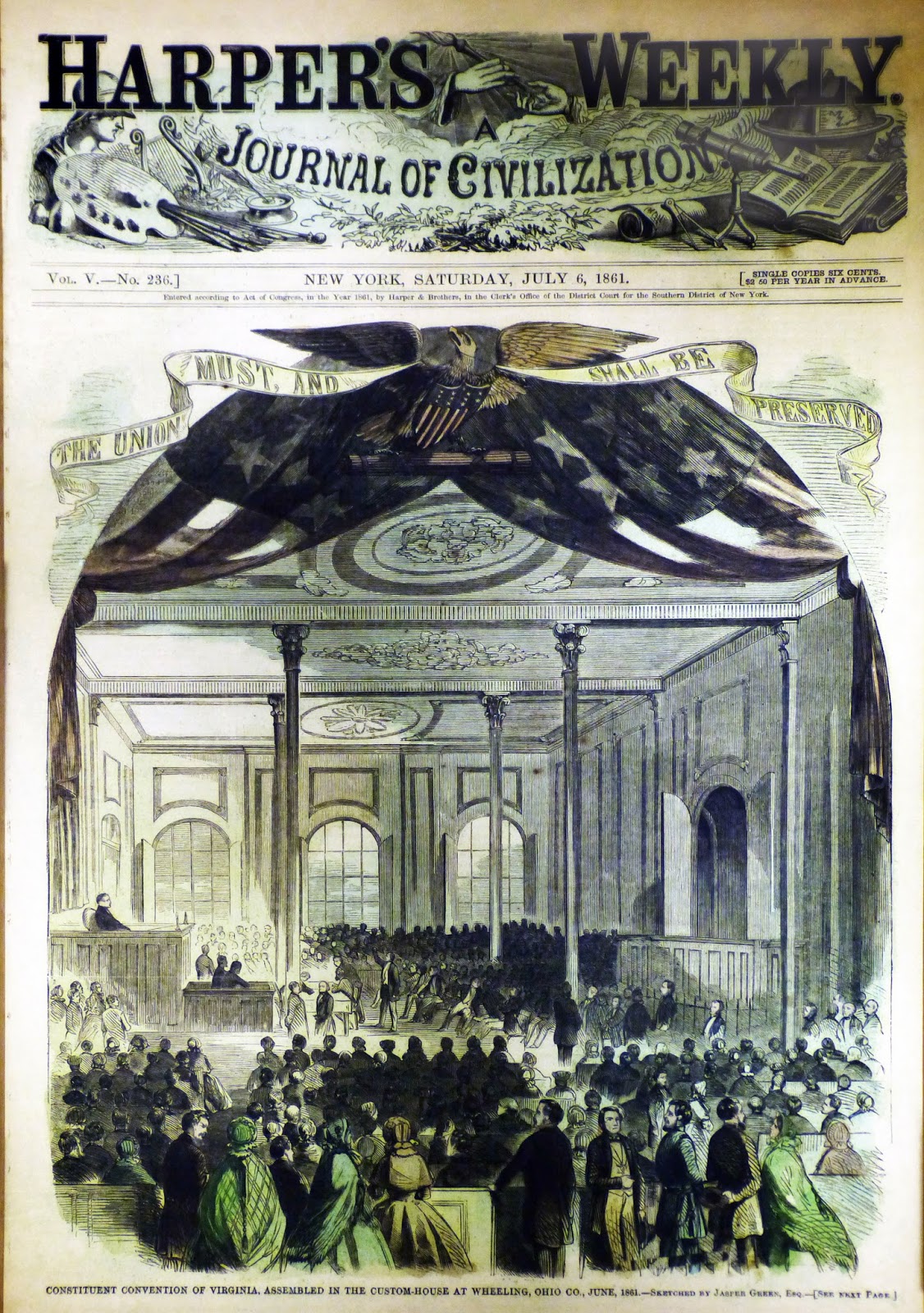 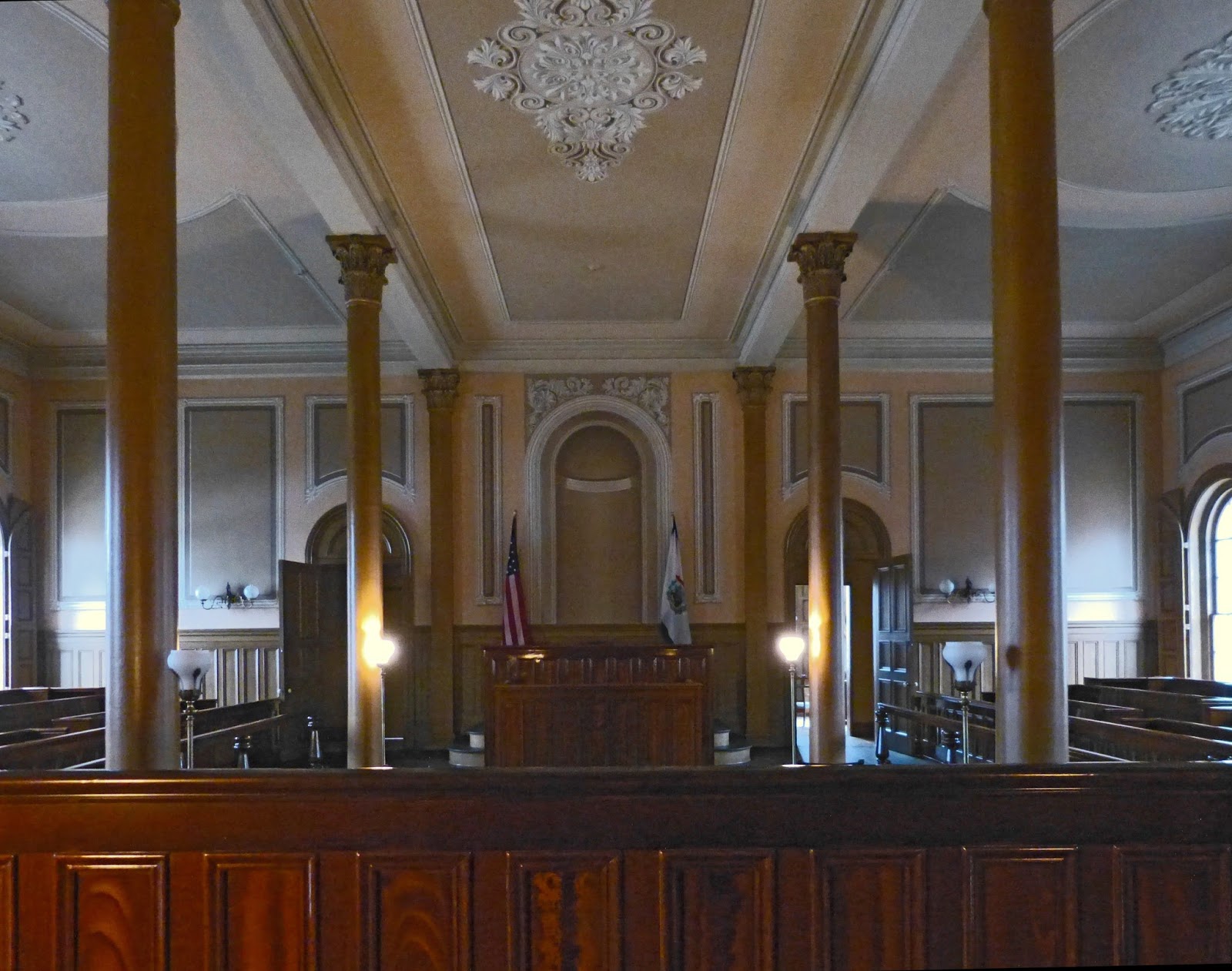 
But cooler voices like that of Waitman Willey pointed out that they could not constitutionally secede from Virginia without the permission of Virginia.

(Clause 1 of Section 3, Article 4 of the constitution says: New States may be admitted by the Congress into this Union; but no new States shall be formed or erected within the Jurisdiction of any other State; nor any State be formed by the Junction of two or more States, or parts of States, without the Consent of the Legislatures of the States concerned as well as of the Congress.)

Instead, they established the Restored Government of Virginia as the loyal government of the state with Francis H. Pierpont as governor.


The office occupied by Governor Pierpont from the spring of 1861 to the fall of 1863 has been preserved in West Virginia Independence Hall. The desk and corner cupboard were the property of Francis Pierpont. 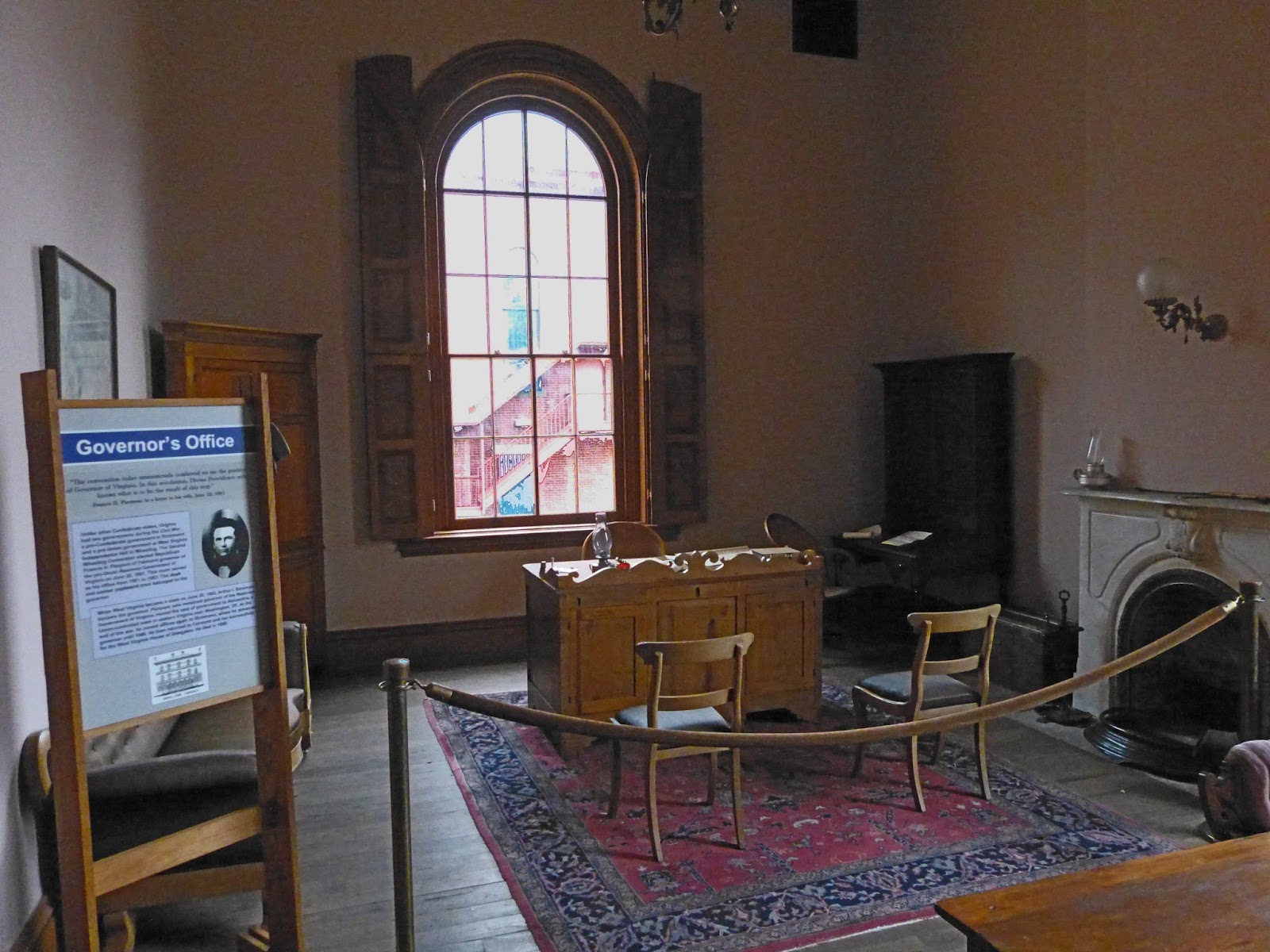 The Restored Government sent John S. Carlile and Waitman Willey to Washington as Senators to replace James Mason and Robert Hunter, respectively, who had been expelled from the Senate for their support of the Confederacy.


The restored government used the seal of the State of Virginia with the words "Liberty and Union" added. 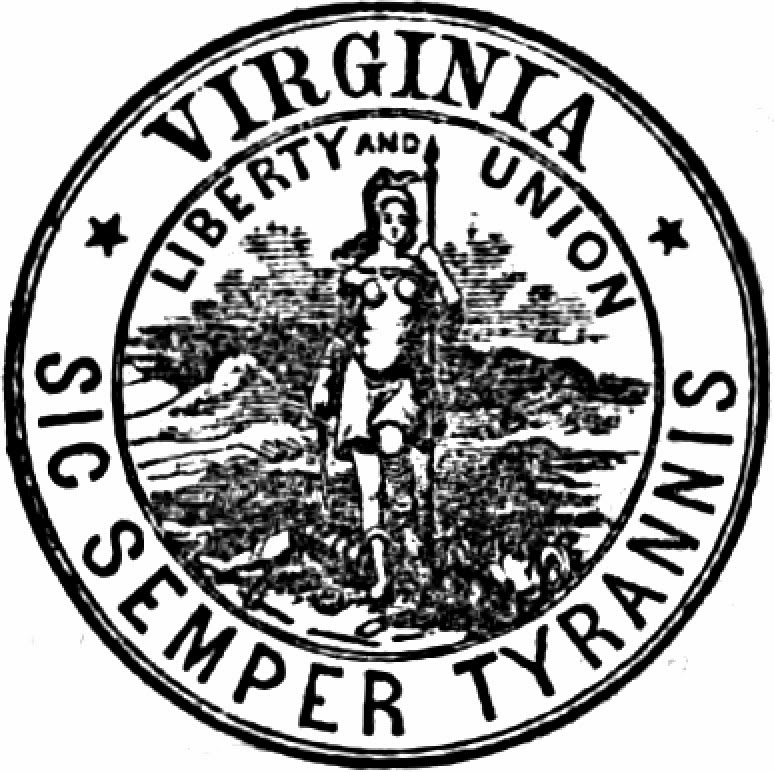 As the legal government of Virginia, Governor Pierpont's administration supplied troops to the Union and used its authority to approve a proposal that a new state be carved out of western Virginia. Congress voted to accept West Virginia as a state on December 31, 1862, and the new state came into existence on June 20, 1863, with Wheeling as its capital. The new government of West Virginia under Governor Arthur Boreman met in a building at 1413 Eoff Street, built for the Linsley Academy in 1858. The Restored Government of Virginia met there briefly as well.

This building is now the offices of Cassidy, Myers, Cogan & Voegelin, L.C., labor lawyers, as well as a design firm  called "Intellectual Capitol." 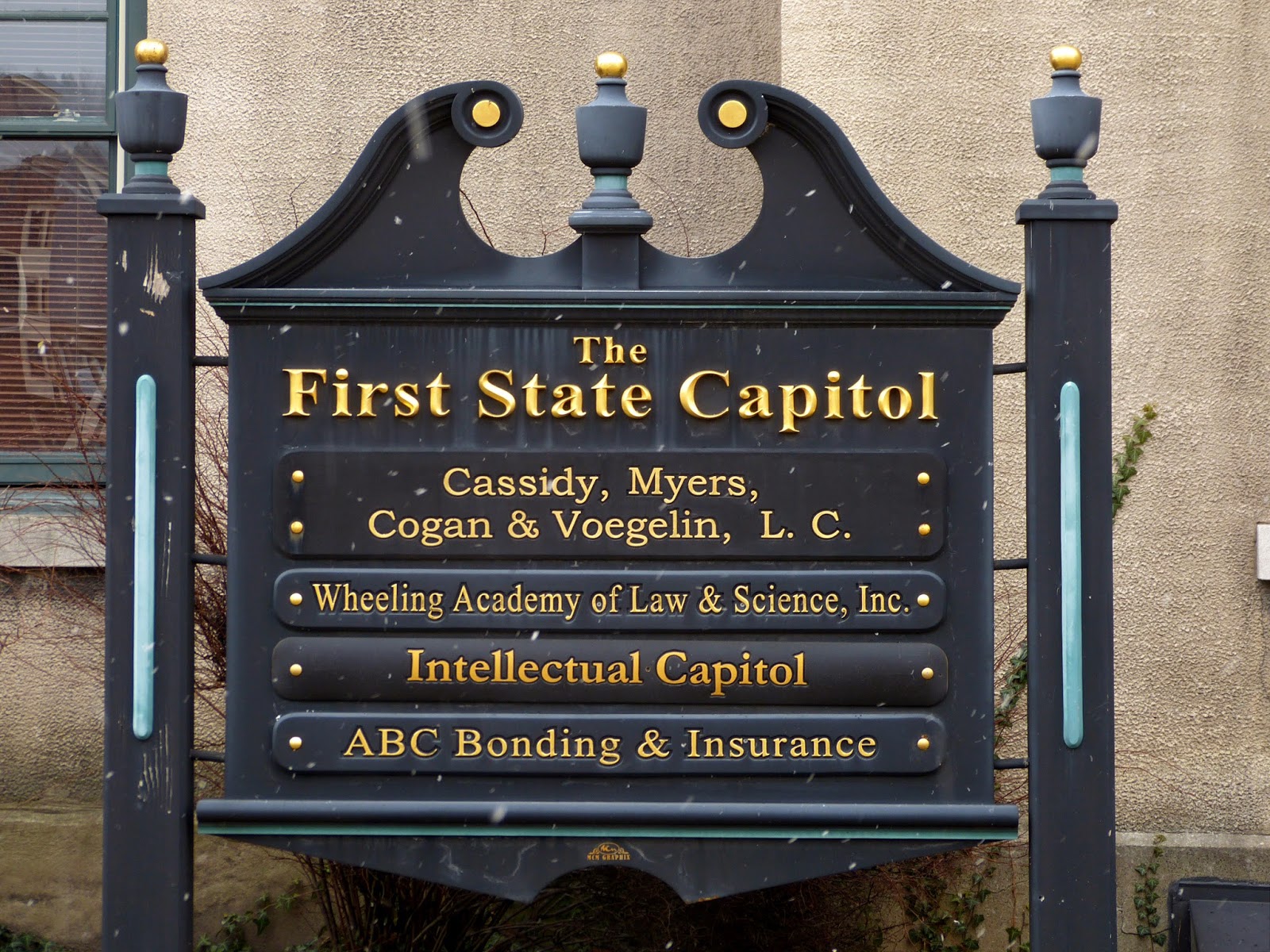 Since Wheeling was no longer part of Virginia, the Pierpont government could not continue to meet in Wheeling. In August, the Restored Government of Virginia moved to Alexandria, Virginia, across the river from Washington. The city had been under Union control from the very beginning of the Civil War. The government was headquartered at the Potomac Bank Building at 415 Prince Street in Alexandria. 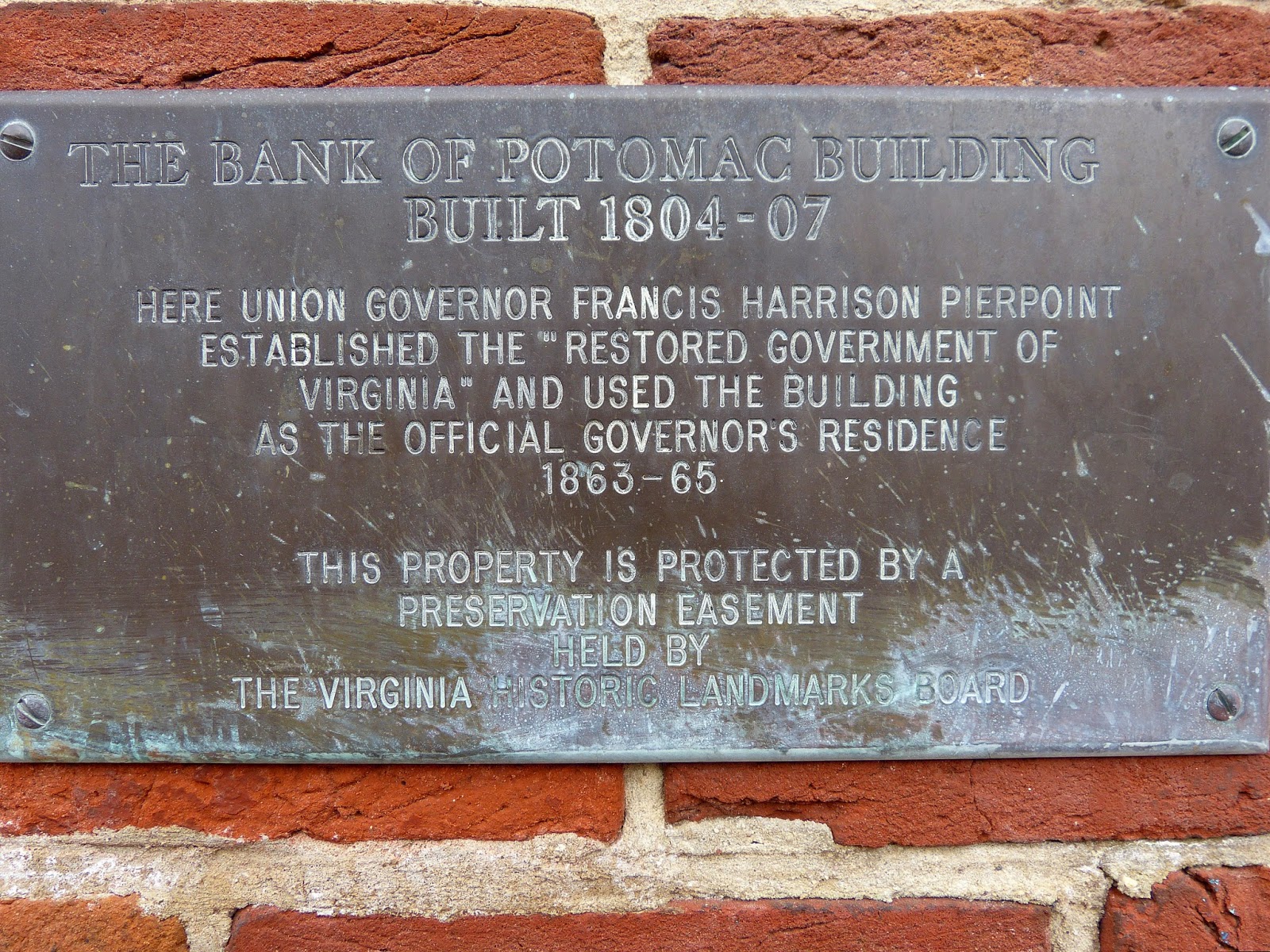 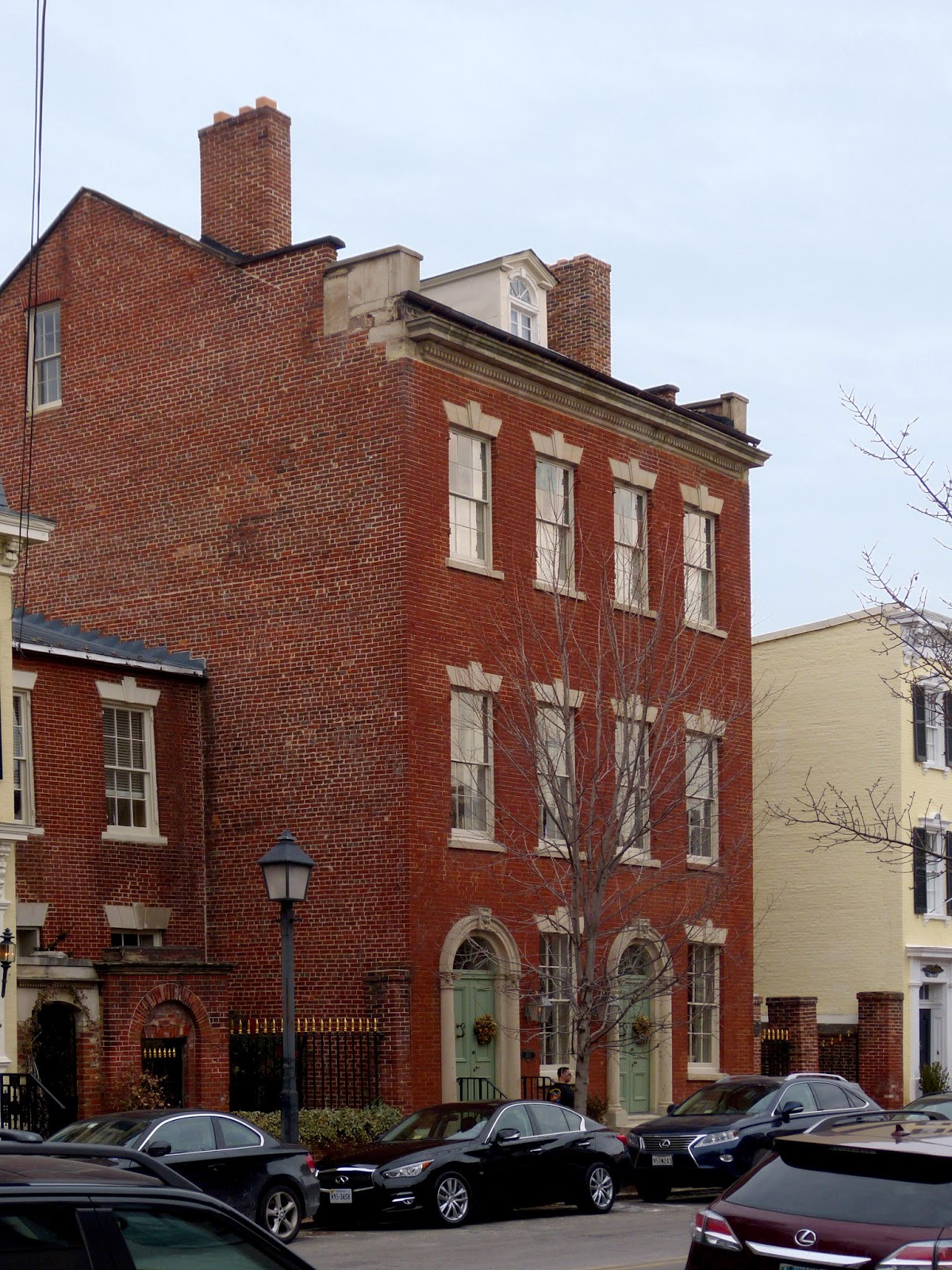 The Pierpont government was in an anomalous position. Its original base of operation and most of its territory had been lost, but the original constitution had not been modified to reflect the loss. The loyal government had jurisdiction over all of Virginia, but its actual authority extended only to those parts of Virginia that were under Union occupation. Lincoln's Emancipation Proclamation, which took effect on January 1, 1863, specifically exempted states, cities, and counties under federal control at that time.

Arkansas, Texas, Louisiana (except the parishes of St. Bernard, Palquemines, Jefferson, St. John, St. Charles, St. James, Ascension, Assumption, Terrebone, Lafourche, St. Mary, St. Martin, and Orleans, including the city of New Orleans), Mississippi, Alabama, Florida, Georgia, South Carolina, North Carolina, and Virginia (except the forty-eight counties designated as West Virginia, and also the counties of Berkeley, Accomac, Northampton, Elizabeth City, York, Princess Anne, and Norfolk, including the cities of Norfolk and Portsmouth), and which excepted parts are for the present left precisely as if this proclamation were not issued.

So, ironically, enslaved people in the parts of Virginia under the control of the loyal government -- "the counties of Berkeley, Accomac, Northampton, Elizabeth City, York, Princess Anne, and Norfolk, including the cities of Norfolk and Portsmouth)" -- were not legally freed by the proclamation.

Governor Pierpont called a constitutional convention in January of 1864 to remedy these anomalies. Seventeen delegates attended, representing the counties of Accomack, Alexandria (later Arlington), Charles City, Elizabeth City, Fairfax, James City, Loudoun, New Kent, Norfolk, Northampton, Princess Anne, Warwick, and York, and the cities of Alexandria, Norfolk, Portsmouth, and Williamsburg. On March 10, they voted 15 to 1 with one abstention to end slavery in Virginia. The lone 'no' vote was cast by William Moore of Northampton with John Stone of Princess Anne not voting. On April 7, they adopted the new constitution. This new constitution was recognized throughout Virginia after the defeat of the Confederacy in May 1865.

The Pierpont government subsequently moved to Richmond, and in June 1865, voted to restore the vote to most former Confederate supporters if they took an amnesty oath or were pardoned by the U.S. government.

In 1868, the Pierpont government was replaced by the Military District of Virginia as part of the Reconstruction Act of 1867. The 1864 constitution continued in effect until the Underwood constitution of 1869.