Clash of the Martyrs

In Alexandria, at the corner of Pitt and King Streets, on the wall of the Monaco Hotel is a bronze plaque commemorating the site of the Marshall House hotel and the death of James W. Jackson. 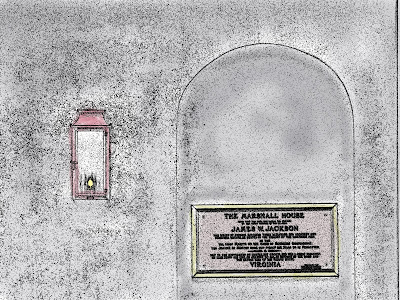 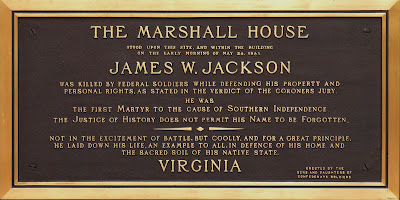 The Marshall House
stood upon this site, and within the building
on the early morning of May 24, 1861
James W. Jackson
was killed by Federal soldiers while defending his property and
personal rights as stated in the verdict of the coroners jury.
He was
the first martyr to the cause of Southern Independence.
The justice of history does not permit his name to be forgotten.
-<>-
Not in the excitement of battle, but coolly and for a great principle,
he laid down his life, an example to all, in defence of his home and
the sacred soil of his native state
Virginia
This commemoration is so one sided as to be incomprehensible to modern passers-by. It doesn't help to find James W. Jackson's name nearby on the Confederate Soldier Monument at South Washington and Prince Streets.﻿﻿ ﻿﻿ ﻿ 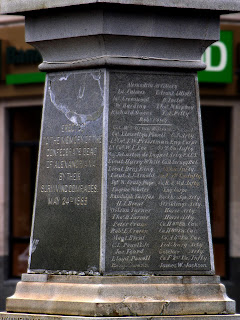 The story is told more clearly on a Civil War Trails marker uptown near the King Street Metro Station across from the Masonic Shrine. 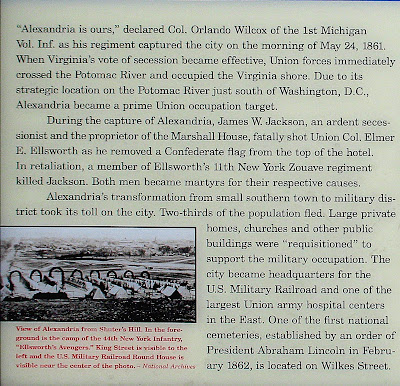 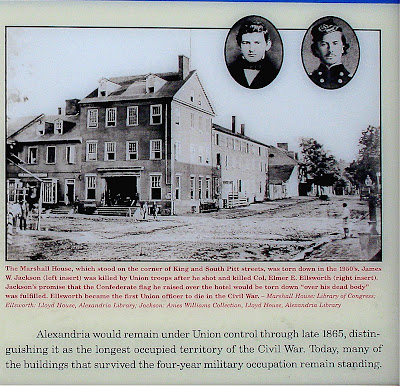 In May of 1861, the Civil War was breaking out; Virginia had voted to secede from the Union. The safety of the Union capital depended on the capture of Alexandria directly across the river. Elmer Ellsworth was a young activist who had organized New York firemen into a flashy new regiment, the 11th New York Volunteers, also called The New York Fire Zouaves. That May, he volunteered to lead the right of the line in an invasion of Alexandria. As his troops moved up King Street, Ellsworth spotted a 16 by 30 foot Confederate flag flying over the Marshall House hotel run by James W. Jackson. His flag was a modified version of the "Stars and Bars", not the now more familiar Battle Flag. (See more on The Marshall House Flag) 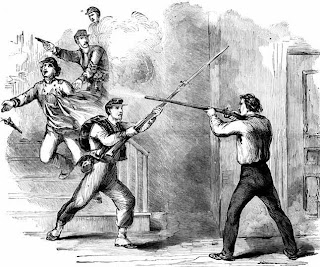 Ellsworth ran up to the roof and tore down the flag. On his way down the stairs, he was met by Jackson who shot him. Jackson in turn was shot by Francis E. Brownell, a private in Company A of Ellsworth's Regiment. Ellsworth was already quite famous. Aside from touring with his colorful Zouave regiment, he had worked in Lincoln's law office and participated in Lincoln's campaign for President. As the first Union officer killed in the Civil War, he instantly became a martyr to the Union cause. His letter to his parents written just before embarking for Alexandria is oft quoted:

MY DEAR FATHER AND MOTHER; The regiment is to move across the river to-night. We have no means of knowing what reception we are to meet with. I am inclined to the opinion that our entrance into the city of Alexandria will be hotly contested, as I am informed that a large force have arrived there today. Should that happen, my dear parents, it may be my lot to be injured in some manner.

Whatever may happen, cherish the consolation that I was engaged in the performance of a sacred duty; and tonight, thinking over the probabilities of the morrow, and the occurrences of the past, I am perfectly content to accept whatever my fortune may be, confident that He who noteth even the fall of a sparrow, will have some purpose e'en in the fate of one like me.

My darling and ever loved parents, good-by. God protect, and care for you.

Elmer Elsworth's funeral was held in the East Room of the White House; Dr. Smith Pyne rector of St. John's Church, presided. This sketch by Alfred R. Waud is in the Library of Congress. 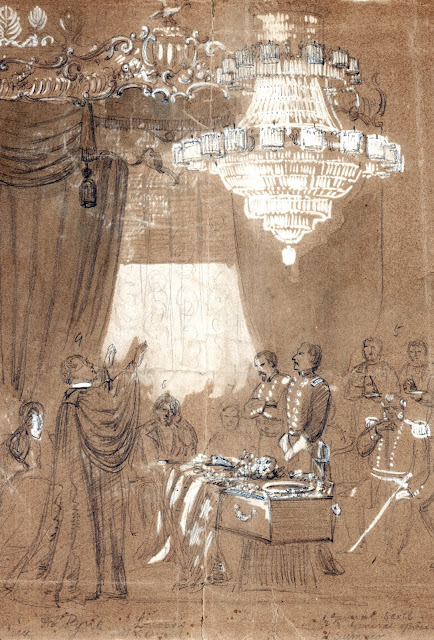 Ellsworth's body lay in state in the East Room at the White House until it was transported to his hometown, Mechanicsville, New York. Jackson became famous throughout the South as "The Martyr of Alexandria." In 1900, his name was added to the Confederate Soldier monument in a huge ceremony. I don't know when the Sons and Daughters of Confederate Veterans put up the plaque at King and Pitt Streets -- perhaps when the Marshall House was replaced by a Holiday Inn (now the Hotel Monaco).
These two portraits are in the National Portrait Gallery.

My title is borrowed from James Loewen's book "Lies Across America" which drew me to this site. He comments wisely, if intemperately, about its one sidedness. The more even-handed Civil War Trails marker did not exist when Loewen visited Alexandria. The juxtaposition of these two markers illustrates an evolution in historical markers from commemoration to explanation, a theme that will appear repeatedly in these posts.
Posted by Allen Browne at 9:41 AM