In 1915, Robert Bruce, touring manager of AAA, drove along a dirt road marked with red, white and blue "National Old Trails Road" markers near Clarksburg, Maryland. He observed a large boulder recently "erected by Daughters of the American Revolution to mark the site of Dowden's Ordinary the second camp of Braddock in Maryland." In his small book with a long name, he  remarked that "A portion of this old building is still standing, much dilapidated, after a hundred and sixty years."
﻿
﻿ ﻿ ﻿ ﻿ ﻿
In the course of marking the National Old Trails Coast-to-Coast Highway, the Daughters of the American Revolution dedicated this marker with an elaborate ceremony on May 10, 1915. Patriotic songs were sung and speeches made. Hon. John Barrett, director-general of the Pan-American Union "declared that this country is now undergoing the greatest crisis since the Declaration was signed, and Representa­tive [David J.] Lewis also referred to the 'serious emergency,' both speakers expressing confidence that the President could be relied upon to handle the situation to the satisfaction of the American people." This photo appeared in the DAR Annual Report to Congress for 1915-16. 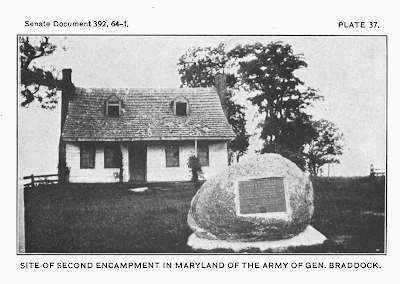 Let's take a closer look at the bronze tablet. 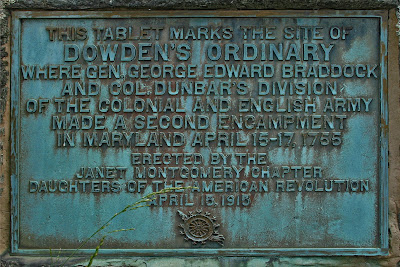 This Tablet Marks the site of
Dowden’s Ordinary
Where Gen. George Edward Braddock
and Col. Dunbar’s Division
of the Colonial and English Army
made a second encampment in Maryland
April 15-17 1755
Erected by the
Janet Montgomery Chapter
Daughters of the American Revolution
It says "George Edward Braddock"! Edward Braddock of the Cold Stream Guards did not have the first name "George." Perhaps the Daughters mis-read "Gen. Edward Braddock" as "Geo. Edward Braddock." I like to think that this is a sort of Freudian slip-of-the-tongue preserved in bronze; that they passionately wished to honor George Washington but, having only Braddock to commemorate, accidentally gave him Washington's first name.
The old tavern disappeared in the 20's and, when I went to look for the marker in 2007, it was tucked away in a thicket of trees high on the side of the recently widened road. I had to brush weeds and grass away to take the picture above. Today, Dowden's Ordinary is a small park with a "ghost" reconstruction of the building (not on the original spot), a reproduction 6-pounder cannon, and lots of informative signage. 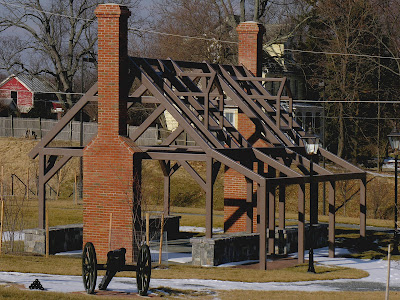 One sign shows this 1811 sketch by Benjamin Henry Latrobe, the original architect of the Capitol, showing the old ordinary when it was Sholl's tavern. 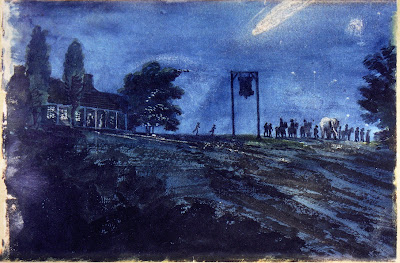 Latrobe also possessed a remarkable talent for invention. In an innocuously titled sketch. "Sholl's tavern Clarksburg" .... Latrobe somehow contrived to get the first elephant ever brought to the United States into a nocturnal setting illuminated by the ghostly light of the great Comet of 1811. Or did he really witness this, incredible scene?

A riding toy in the playground at the park commemorates the elephant in Latrobe's sketch. 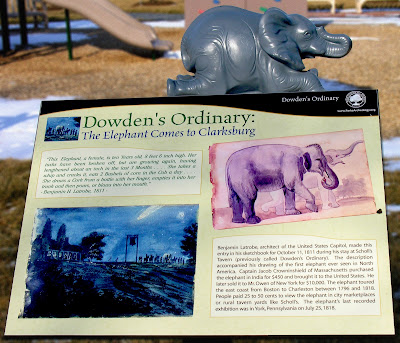 We'll hear more about Braddock and the National Old Trails Road in future posts, and I promise not too many more elephant effigies.
Posted by Allen Browne at 11:18 AM