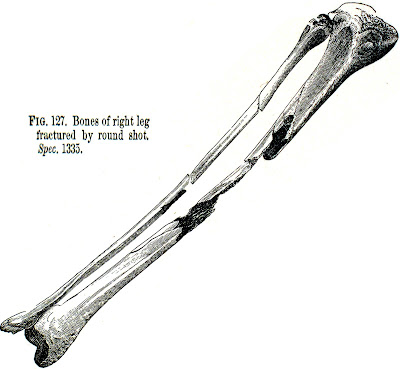 At the National Museum of Health and Medicine

On the second day of the battle at Gettysburg, Pennsylvania, General Daniel Sickles against orders positioned his troops forward of the left end of the Union line, adopting an indefensible position known as the "Peach Orchard Salient."  The salient, a sharp-angled position, opened Sickles' troops to attack on both sides and isolated them from the rest of the Union line. This photo by Craig Swain (available on HMDB) of a detail from a marker on the battlefield shows the position Sickles should have taken and the one he did take. 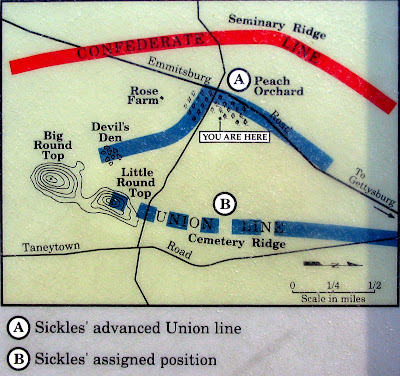 The results were disastrous. Sickles would have been court-martialled for the error had he not been severely wounded during the collapse of his salient. He was struck in the right leg by a 12-pound round shot.  Sickles was taken by litter from the Trostle Barn to a hospital on the Taneytown road where his leg was amputated above the knee by surgeon Thomas Sims.  The first director of the Army Medical Museum, John H. Brinton, M.D., explains what happened to the lost leg.


Occasionally it would happen that, a specimen would be contributed to the Museum by its former owner.  No. 1335, resulting from a leg crushed by a twelve-pound shot at Gettysburg, and for which thigh amputation was performed, was forwarded to the Museum in an extemporized coffin on which was tacked a visiting card "with the compliments of Major General D. E. S., United States Volunteers."

D. E. S was Daniel E. Sickles. The preliminary catalogue of the museum has this notation:


Major General D. E. Sickles, U. S. Vols., was wounded on the evening of the second day of the battle of Gettysburg, by a twelve pounder solid shot, which shattered his right leg. General Sickles was on horseback at the time and unattended. He succeeded in quieting his affrighted horse and in dismounting unassisted. Aid arriving promptly, he was removed a short distance to the rear, to a sheltered ravine, and amputation was performed low down in the thigh by Surgeon Thomas Sim, U. S. Vols. The patient was then sent to the rear, and the following day was transferred to Washington. The stump healed with great rapidity. On July 16th, the patient was able to ride about in a carriage. Early in September, 1863, the stump was completely cicatrized, and the general was able again to mount his horse. The specimen was contributed to the Army Medical Museum by General Sickles, and the facts of the case by his staff surgeon, Dr. Sim.

Specimen 1335, Sickles' leg, is prominently displayed in the National Museum of Health and Medicine, the successor to the Army Medical Museum, in their new building in Silver Spring, Maryland. The shattered bones of General Sickles' leg are displayed with a 12-pound round shot of the sort that shattered it. 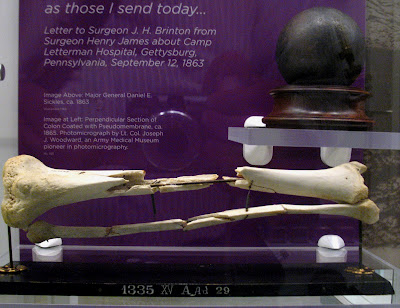 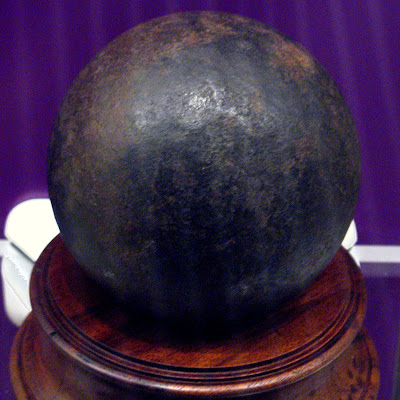 Sickles' leg is part of a display entitled Documenting Medical History in the Collection that Teaches exhibit. 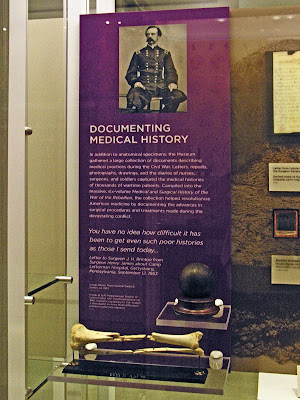 The photo below shows the leg displayed in the museum's previous location at the now closed Walter Reed Army Medical Center. 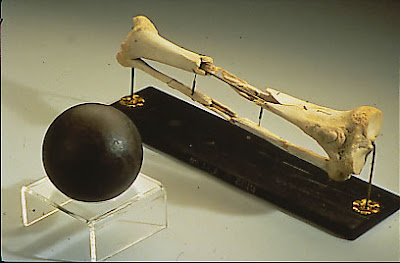 General Sickles was photographed without his leg at the Army Medical Museum in 1865. This photo of that photo was taken at Walter Reed. 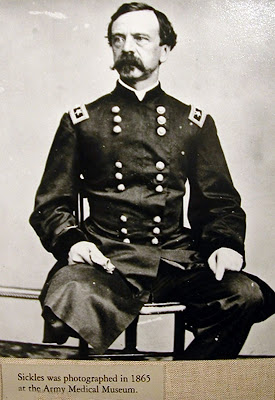 In this 1886 LOC photo, Daniel Sickles visits the Trostle barn where he was wounded. He is flanked by Generals Car and Graham. 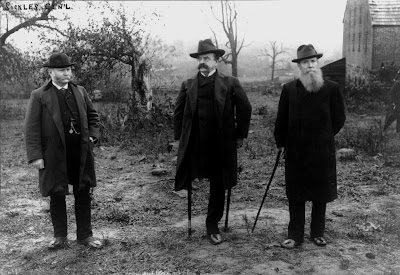 Sickles visited his leg, reputedly in the company of female friends, yearly on the anniversary of its loss. This newspaper woodcut shows Sickles in later years viewing his leg in a glass case at the Army Medical Museum. 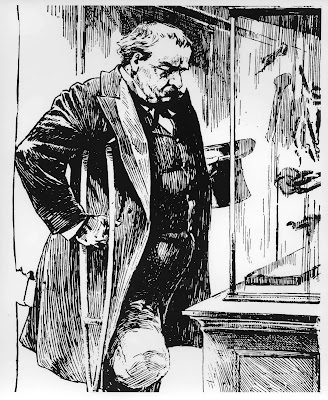 A woodcut of the leg appeared in the 1866 Cataloque of the Army Medical Museum which I tracked down at the NMHM's sister institution, the National Library of Medicine. 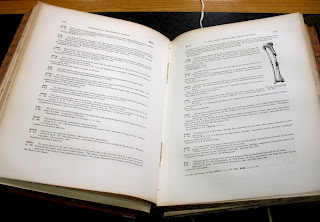 1335. d. 29 The right tibia and fibula, comminuted in the shafts by a round shot. See Figure 127. Major General D. E. S., U. S. Vols.: Gettysburg, 2d July; amputated in the lowest third of the thigh by Surgeon T. Sims, U.S. Vols., on field; stump healed rapidly and subject was able to ride in a carriage, 16th July; completely healed, so he mounted his horse early September, 1863. Contributed by the Subject.

Sickles' leg has been and continues to be one of the most popular exhibits at the National Museum of Health and Medicine. The museum just re-opened after the closure of the Walter Reed Army Medical Center. 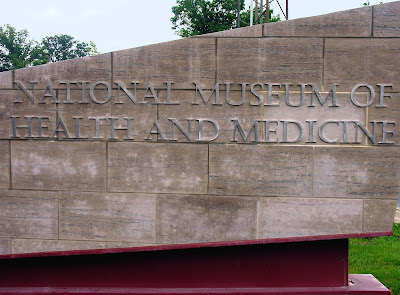 This brand new Leed-Silver Certified green building, designed for the Museum, uses indirect natural light in administrative areas and is surrounded by grassy lawns and trees. 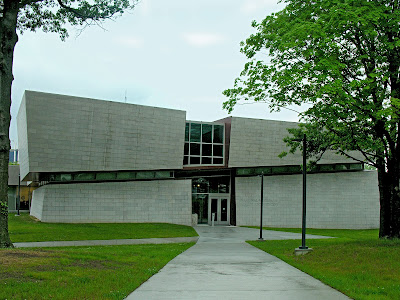 The obscure and nearly invisible modern constellation Microscopium, symbol of the NMHM, is embedded in the floor of the main atrium of the museum. 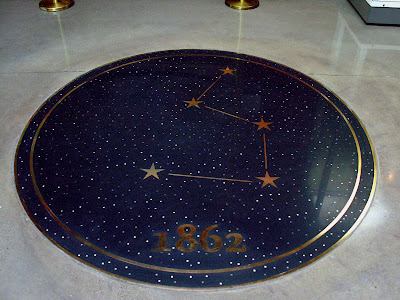 And this haunting anatomical drawing is engraved on the windows. 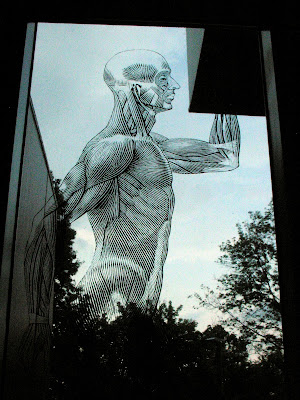 A wide variety of Civil War body parts are on display in the NMHM including a lock of Abraham Lincoln's hair and fragments of his skull. 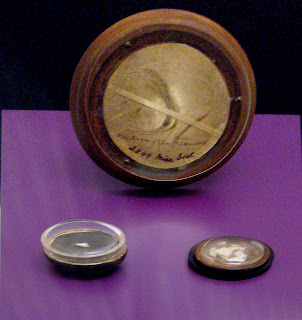 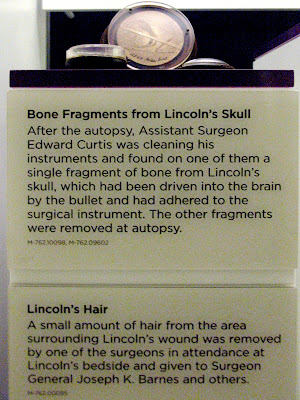 Bone Fragments of Lincoln's Skull
After the autopsy, Assistant Surgeon Edward Curtis was cleaning instruments and found on one of them a single fragment of bone from Lincoln's skull, which had been driven into the brain by the bullet and had adhered to the surgical instrument.  The other fragments were removed at autopsy.

Lincoln's Hair
A small amount of hair from the area surrounding Lincoln's wound was removed by one of the surgeons in attendance at Lincoln's bedside and given to Surgeon General Joseph K. Barnes and others.

In an exhibit on Walt Whitman, we find the femur of Pvt. Oscar Cunningham of the 82nd Ohio who died on June 4, 1864 at Armory Square Hospital in Washington DC. 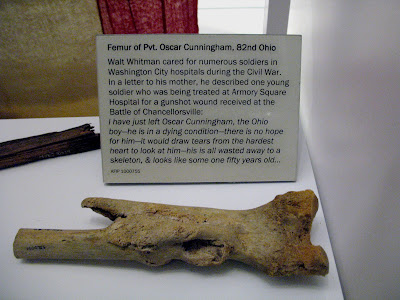 Femur of Pvt. Oscar Cunningham, 82nd Ohio
Walt Whitman cared for numerous soldiers in Washington City hospitals during the Civil War. In a letter to his mother, he described one young soldier who was being treated at Armory Square Hospital for a gunshot would recieved at the Battle of Chancellorsville:


I have just left Oscar Cunningham, the Ohio boy -- he is in a dying condition -- there is not hope for him -- it would draw tears from the hardest heart look at him -- his is all wasted away to a skeleton. & looks like some one fifty years old...


-- you remember I told you a year ago, when he was first brought in, I thought him the noblest specimen of a young western man I had seen, a real giant in size, & always with a smile on his face—O what a change, he has long been very irritable, to every one but me, & his frame is all wasted away.