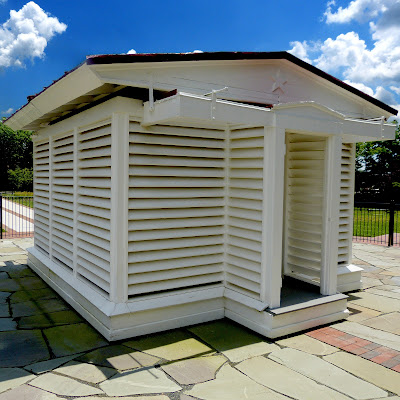 at the Gaithersburg Latitude Observatory 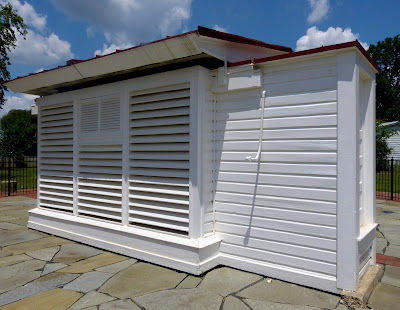 This tiny building was instrumental in recording the wanderings of the North Pole. Latitude is angular distance from the equator, and the equator is fixed perpendicular to the poles, so the motion of the pole is often refered to as variation of latitude. This wobble is scientifically interesting but not very imposing. The Dictionary of Astronomy says, "The effect is very small, the displacement of the pole being less than 10 m, but it produces slight but detectable changes in latitude and longitude of the order of 0.3". Meyer gives this plot of the polar motion between 1922 and 1927 and notes that the square in which it's drawn "represents an area at the pole slightly smaller than a baseball diamond." 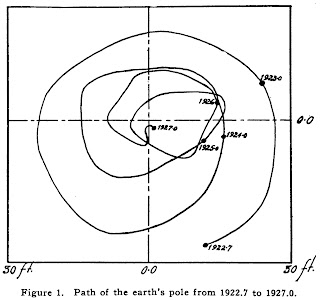 Euler predicted the wobble of the earth's axis of rotation in 1758, but it was not until the 1880's that science was ready to measure it. In 1888, Kustner found that the latitude of Berlin had changed slightly during his observations. In 1891, Seth Carlo Chandler, Jr., established the 12-month and 14-month combined periods of the phenomenon that would come to be called the Chandler Wobble. (Readers should be warned not to confuse the Chandler wobble with precession). 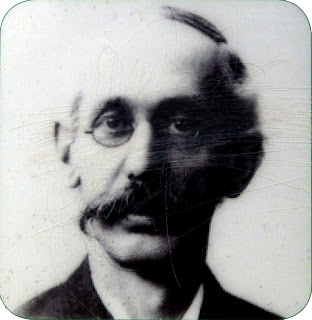 Also in 1891, Edwin Smith, Chief of the Instrument Division of the Coast and Geodetic Survey set up an obervatory in his Rockville backyard and began studying the variation of latitude. 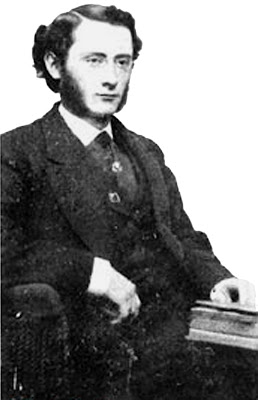 He built the observatory using plans he found in Scientific American in the backyard of this house at 108 Forest Ave. in Rockville. 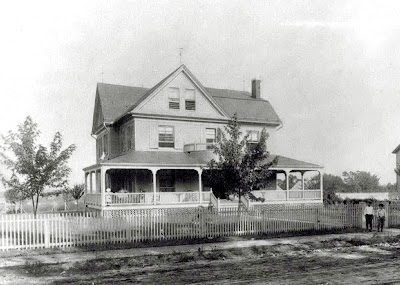 He published an article on his observations of the variation of latitude in 1894. This sketch map from Smith's article shows the old observatory in Smith's Rockville garden. 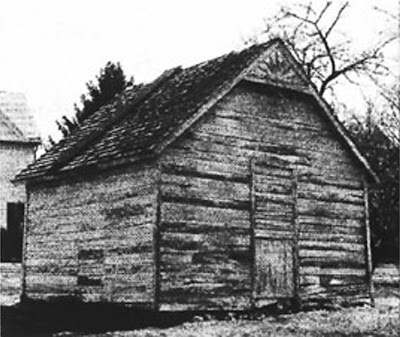 The International Latitude Service was formed in 1899 to measure the Chandler wobble. The idea was to take very accurate latitude measurements at several locations at the same latitude. Observatories were set up at four places around the latitude 39 degrees 8 minutes: Mizusawa, Japan; Carloforte, Italy; Ukiah, California; and Gaithersburg, Maryland. Later observatories were added at Cincinatti, Ohio, and Tschardjui in Central Asia. Edwin Smith closed his home observatory and built a new one on top of Summit Hill in Gaithersburg on a corner of the Fulks property. 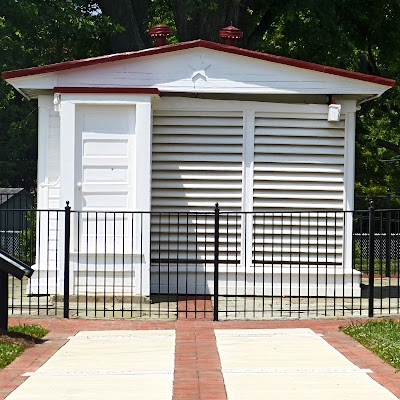 The plans called for an iron structure like the one used in Ukiah, California, but to save money, Smith built the observatory of pine on the same pattern with a roof covered in heavy tin. 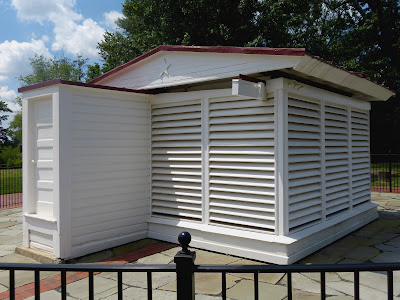 The heavy roof is in two pieces sitting on wheels on rails so it can be opened to the sky. 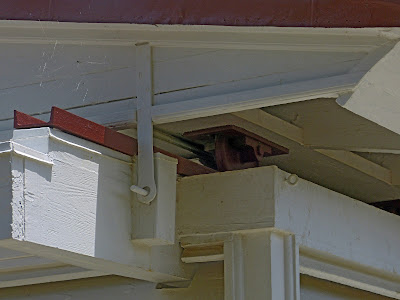 This photo from around 1910 appears on the signage at Latitude Observatory Park and shows the roof open and the Visual Zenith Telescope (VZT) pointing out of the opening. 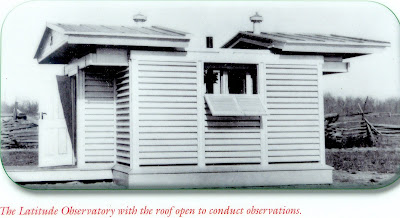 The Latitude Observatory with the roof open to conduct observations.

This 1984 photo by Trudy Walton shows the pulley system inside the observatory that opens the roof. 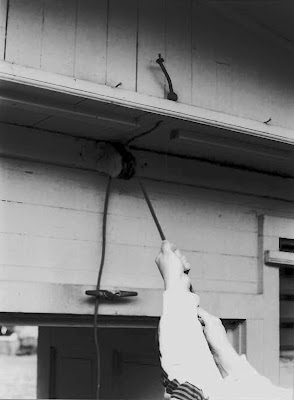 The zenith telescope used in the original four observatories, including Gaithersburg, had a focal length of 51 inches and an objective of 4 1/2 inches.  This illustration from Schlesinger, 1899, shows what it looked like.

Here's a view down through the roof of the observatory showing Earl Williams at the zenith telescope. 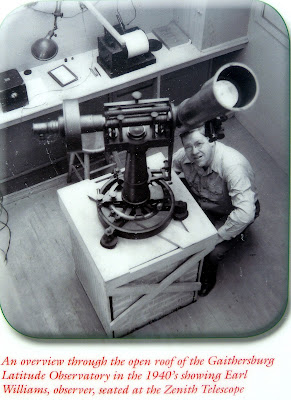 An overview through the open roof of the Gaithersburg Latitude Observatory in the 1940's showing Earl Williams, overseer, seated at the Zenith Telescope.

I am the variation-of-latitude observer at Gaithersburg, Md. As such it can hardly be said that I lead a normal existence. My outlook on life is largely "uplook" at stars. I work while the rest of the world sleeps, with only the mournful hoot of a distant owl or the incessant call of the whip-poor-will to keep me company. When the world begins to teem with activity I am just starting my slumber. One nice thing though, I can sleep into the day as far as I please. No raucous alarm clock disturbs my slumbers, calling me unwillingly to a workaday world. But I must begin my labors at the end of the day when others have given themselves to lighter things. Others work and then play; I violate this well-advocated precept by playing first and then working. Then, too, my meals are topsyturvy, for I eat my breakfast at noon and often wind up the day by eating at three or four o'clock in the morning.

After 1910, the observatory included another section holding a photographic Zenith Tube.  In this photo from Ross, 1915, both roofs are shown open. 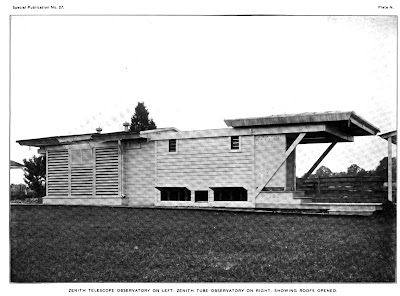 The complex consisted of several buildings. 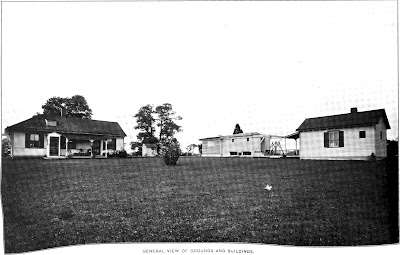 The buildings at 100 DeSellum Ave., shown here in a 2007 photo, were torn down in the creation of the park. Only the old observatory, the meridian mark pier and 5 geodetic markers remain. 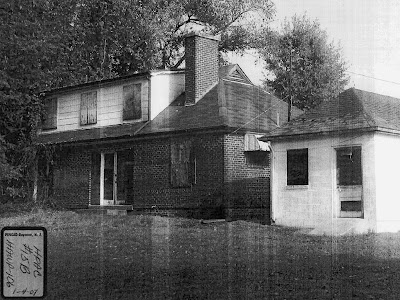 This pagoda-like meridian mark pier, or azimuth mark, was used to align the telescope on the meridian. It stands 176.5 feet due south of the observatory. 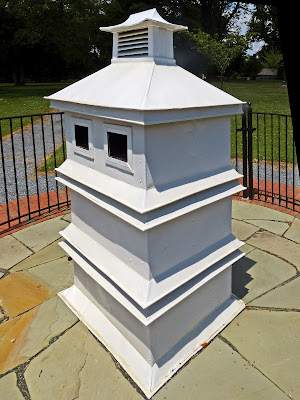 The telescope was leveled on a site in one of the windows, flipped over and leveled again using the other window. This HABS drawing shows the relationship between the observatory and the meridian marker. 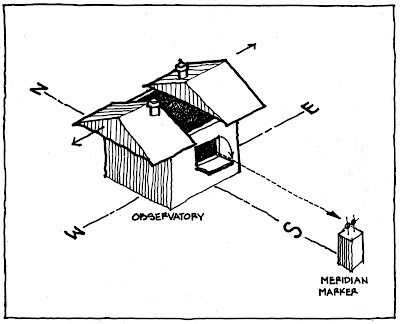 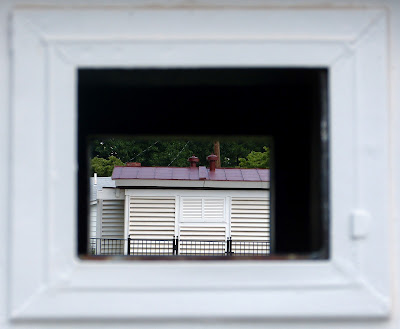 The observatory was used until 1982. In 1987, the grounds were turned over to the town of Gaithersburg by the NOAA, the successor to the ILS. ﻿It was designated a historic landmark in 1989. 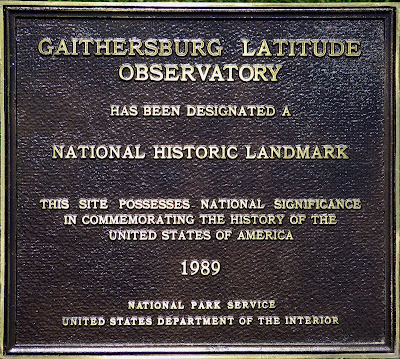 The star motif above east and west doors and on the ventilators on each roof segment are about the only non-utilitarian elements of the architecture of the observatory. 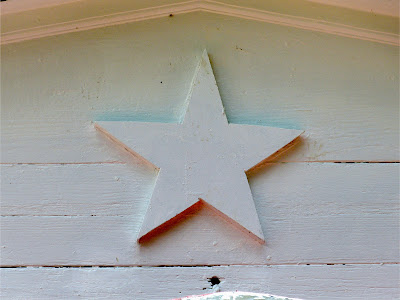 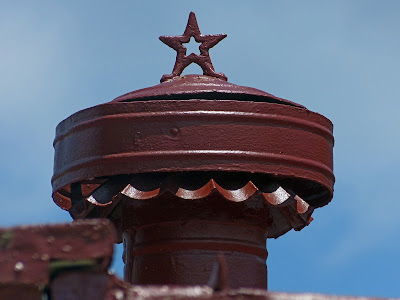 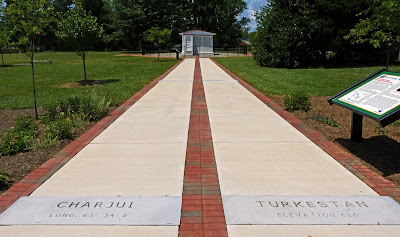 Charjui Turkestan
Long 63° 14' E
Elevation 616'﻿
﻿
The Observatory Park in Gaithersburg has undergone recent renovations and is now open to the public. 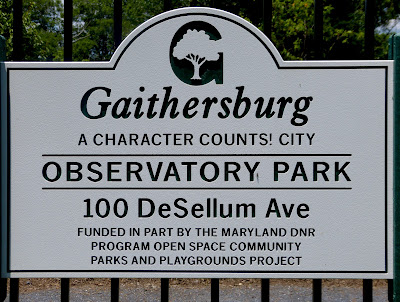 For more information and a look at the signage at Obervatory Park see my resources page.
Posted by Allen Browne at 10:41 PM