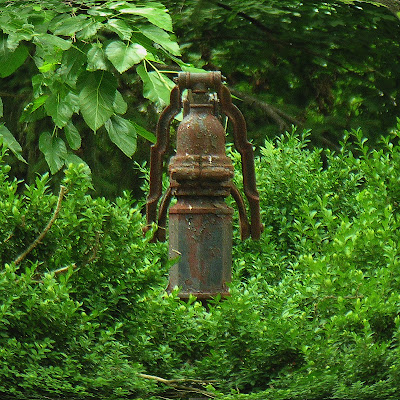 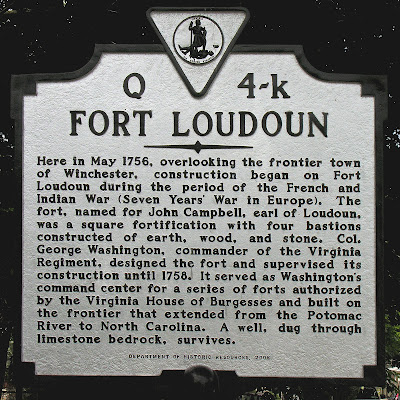 Q 4-k Fort Loudoun
Here in May 1756, overlooking the frontier town of Winchester, construction began on Fort Loudoun during the period of the French and Indian War (Seven Year’s War in Europe). The fort, named for John Campbell, earl of Loudoun, was a square fortification with four bastions constructed of earth, wood, and stone. Col. George Washington, commander of the Virginia Regiment, designed the fort and supervised its construction until 1756. It served as Washington’s command center for a series of forts authorized by the Virginia House of Burgesses and built on the frontier that extended from the Potomac River to North Carolina. A well, dug through limestone bedrock, survives. Department of Historic Resources, 2006.

The old well is in the back yard of the Baker-Hardy House, 419 N. Loudoun Street, in Winchester. 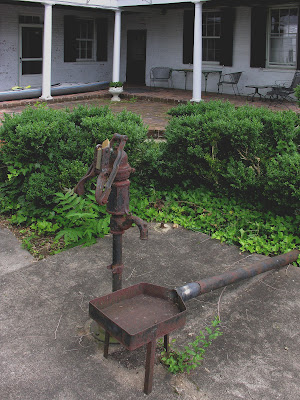 On a nearby wall is this DAR plaque. 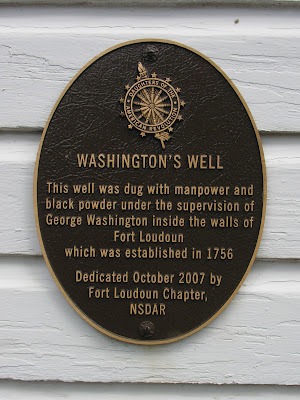 Washington's Well
This well was dug with manpower and
black powder under the supervision of
George Washington inside the walls of
Fort Loudoun
which was established in 1756
Dedicated October 2007 by
Fort Loudoun Chapter,
NSDAR

The historic marker is in the front yard of  419. 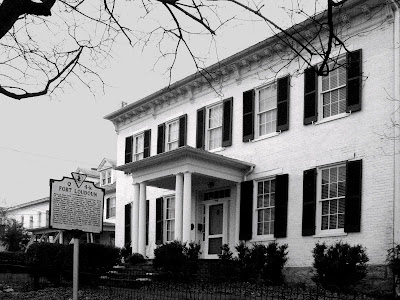 The French and Indian War Foundation placed this marker about Fort Loudoun infront of 419 in 2006. 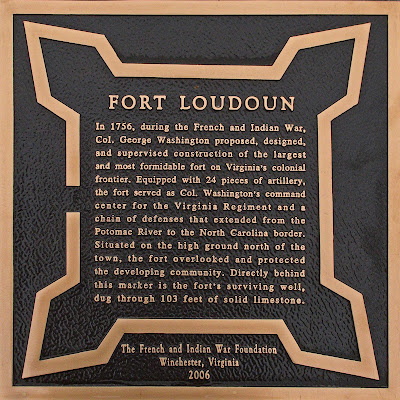 Fort Loudoun
In 1756, during the French and Indian War, Col. George Washington proposed, designed, and supervised construction of the largest and most formidable fort on Virginia’s colonial frontier. Equipped with 24 pieces of artillery, the fort served as Col. Washington’s command center for the Virginia Regiment and a chain of defenses that extended from the Potomac River to the North Carolina border. Situated on the high ground north of town, the fort overlooked and protected the developing community. Directly behind this marker is the fort’s surviving well dug through 103 feet of solid limestone.

Loudoun street was cut right through the old fort in 1842. Thomas K. Cartmell in 1909 says that "When Loudoun Street was extended beyond Piccadilly, going North, it was necessary to cut through the South and North walls, leaving the larger part containing the old well, on the West side. A small part of the two walls, with the two eastern bastions and end wall, was left on the East side of the street." This picture from Henry Howe's 1852 Historical Collections of Virginia shows how Loudoun Street bisects the site of the old fort and the situation of the well inside the fort near the northwest bastion. 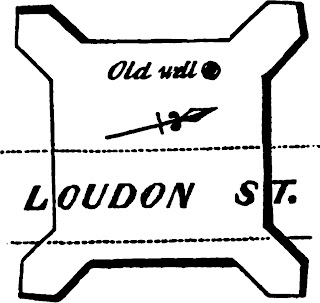 The annexed sketch is a representation of the remains of Fort Loudon, engraved from a drawing in the possession of the "Virginia Historical and Philosophical Society." It appears to have been a field-work, or redoubt, having four bastions, whose flanks and faces were each 25 feet, with curtains 96 feet. The dotted lines represent the present course of Loudon street.

This more modern map of the site of Fort Loudoun appeared as Appendix IV in Allan Powell's 1990 book Fort Loudoun; A little circle marks the location of the well. 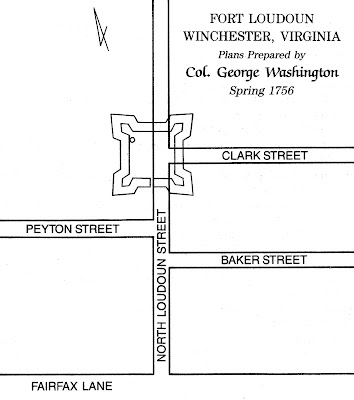 The fort site comprehends several properties on North Loudoun Street. This victorian house is at the northeast corner of Clark and Loudoun streets on the East side of Loudoun street. 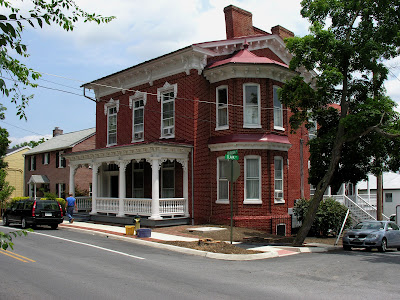 On the other side of Clark Street at 428 N. loudoun is St. Paul AME Church. Organized in 1867 it was one of the first 50 AME congregations chartered in this country. The vernacular Gothic revival building dates from 1878. The tower was added in 1885. 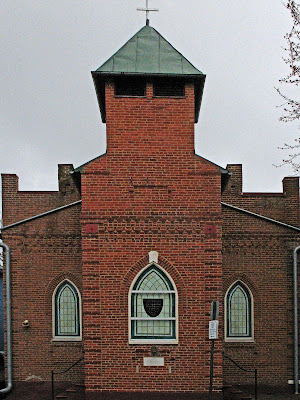 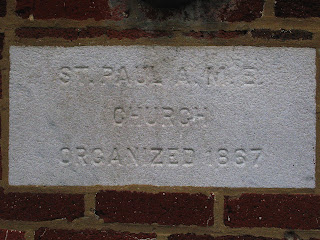 The western portion of the Old Fort became a bastion of education. In 1830, Joseph Baker started a Baptist seminary on this site called the Winchester Female Academy. The academy occupied the southwest part of the fort site now the site of the Fort Loudoun Apartments. In 1848 this little verse appeared in a leaflet advertising the academy:

It always has and ever will
be an established rule,
That on the top of Old Fort Hill
Is taught the finest school. 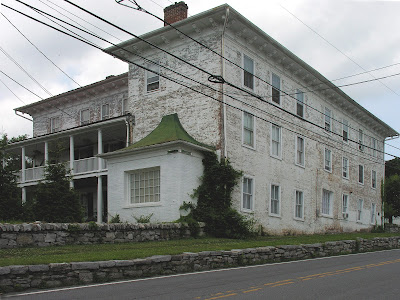 This postcard entitled "Fort Loudoun" shows the courtyard of the seminary building. The rise of land of the middle may be the remnant of the southwest bastion. The caption describes the fort's armaments. 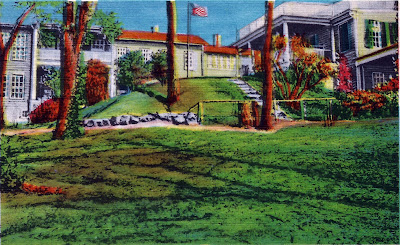 Moved by the entreaties of the people of Winchester, Col. George Washington. after the defeat of Gen. Braddock by the French and Indians. urged the House of Burgesses to erect a fort at Winchester. Receiving instruction, Washington erected the fort 1756-1757, which French officers reported impregnable against their forces at Duquesne. The walls were of log with earth core. and the fort mounted six l8-pounders , six 12-pounders. six 6-pounders, four swivels and two howitzers.

On the northwest part of the property Baker built a house for himself around 1840. That house is the Baker-Hardy house at 419 N. Loudoun. This old house has the old well in the back yard and two historical markers in the front. 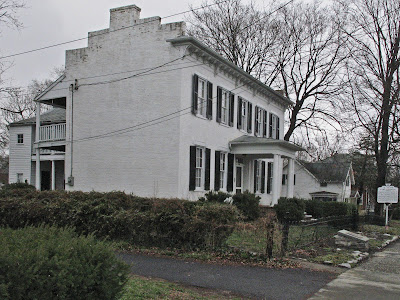 Before his death in 1855 Baker divided the property and sold the academy portion to one of his teachers, Miss Casey who soon became Mrs. Newman. The property was the home of various educational institutions including, in the words of the National Historic Register form for the Winchester Historic District, "the Dunbar Institute, an Episcopal seminary, a classical school run by Captain J. C. Van Fossen, and The Valley Female College (Methodist)." In 1905 it became the Fort Loudoun Female Seminary operated by Laura Gold  and Katherine R. Glass. "For higher culture of young women"  a 1911 ad says. Miss Glass was also the founder of  the Fort Loudoun Chapter of the DAR on December 2 ,1921. She married Henry R. Greene on Dec. 20, 1921. She was president of the school until 1925 when she resigned for health reasons. She explains "what became of the old fort" in her 1926 book, Winchester, Virginia and Its Beginnings. 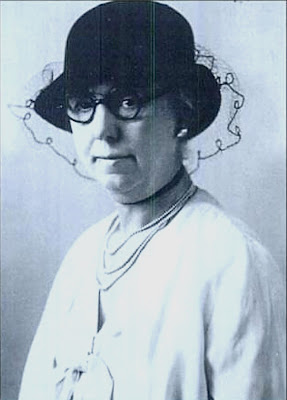 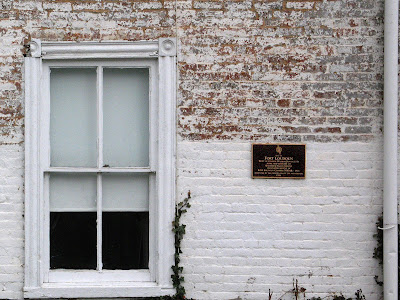 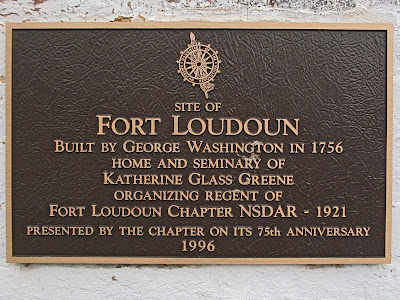 In 1954 Irvan O’connell bought the property and it became the Fort Loudon Apartments. The corner of Peyton and N. Loudoun street is marked on the building. 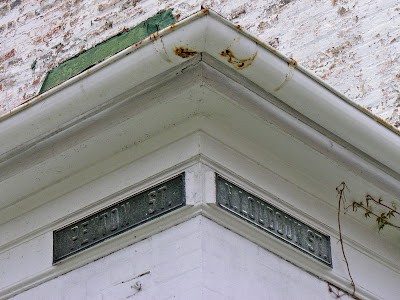 The Baker Hardy House belonged to William G. Kiger during the Civil War and was purchased by John W.  Darlington in 1886. 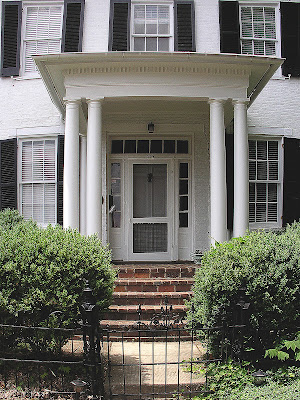 In 1954 the Darlington family sold it to Anne Quirk Hardy. In 1989 it belonged to Ralph Lees Hardy. The the French and Indian War Foundation bought the property in 2002.

George Washington supervised the construction of Fort Loudoun from 1756 until December 1758 with a time out for a bout of severe dysentery. After an embarrassment in the Forbes expedition he resigned from command of the Virginia Regiment to take a seat in the House of Burgesses.  Fort Loudoun was never attacked during the French and Indian war but several historians report that it was scouted by a French officer and found to be impregnable. 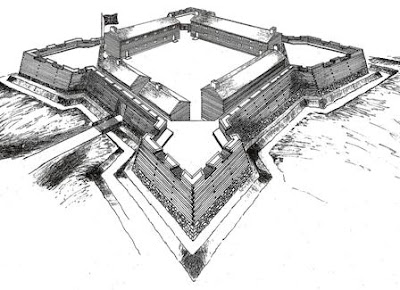