The Mayor of Silver Spring 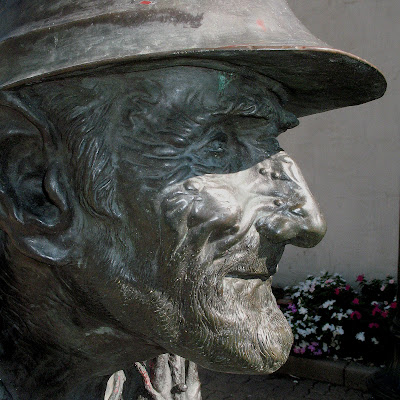 Norman Lane was the "Mayor of Silver Spring"


In a little alley off Georgia Avenue, between an Ethiopian restaurant and a pawn shop,  stands a bust with a plaque commemorating the life of Norman Lane. 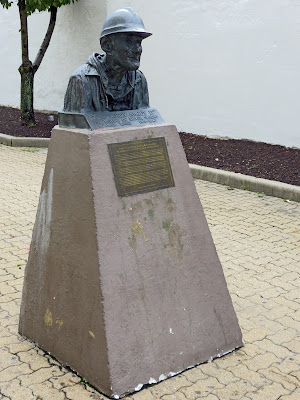 Henry Allen, in a 1991 Washington Post article, says that "Norman Lane was a bum, back when they were called bums, and before you had to call them 'street people' and then 'the homeless.'" The attached plaque tells the story of Silver Spring's "town drunk" and "mayor" in a voice too eloquent to have been written by a committee. 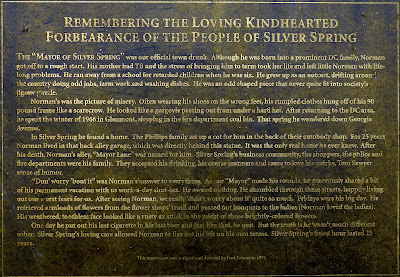 REMEMBERING THE LOVING KINDHEARTED
FORBEARANCE OF THE PEOPLE OF SILVER SPRING

The “Mayor of Silver Spring” was our official town drunk. Although he was born into a prominent DC family, Norman got off to a rough start. His mother had TB and the stress of bringing him to term took her life and left little Norman with life-long problems. He ran away from a school for retarded children when he was six. He grew up as an outcast, drifting around the country doing odd jobs, farm work and washing dishes. He was an odd shaped piece that never quite fit into society’s jigsaw puzzle.

Norman’s was the picture of misery. Often wearing his shoes on the wrong feet, his rumpled clothes hung off his 90 pound frame like a scarecrow. He looked like a gargoyle peering out from under a hard hat. After returning to the DC area, he spent the winter of 1966 in Glenmont, sleeping in the fire department coal bin. That spring he wandered down Georgia Avenue.

In Silver Spring he found a home. The Phillips family set up a cot for him in the back of their auto body shop. For 25 years Norman lived in that back alley garage, which was directly behind this statue. It was the only real home he ever knew. After his death, Norman’s alley, “Mayor Lane” was named for him. Silver Spring’s business community, the shoppers, the police and the fire departments were his family. They accepted his drinking, his coarse manners and came to love his quirky Tom Sawyer sense of humor.

“Don’ worry ‘bout it” was Norman’s answer to everything. As our “Mayor” made his rounds he generously shared a bit of his permanent vacation with us work-a-day shut-ins. He owned nothing. He shambled through these streets happily living out our worst fears for us. After seeing Norman, we really didn’t worry about it quite so much. Fridays were his big day. He retrieved armloads of flowers from the flower shops’ trash and passed out bouquets to the ladies (Norman loved the ladies). His weathered, toothless face looked like a rusty ax stuck in the midst of those brightly-colored flowers.

One day he put out his last cigarette in his last beer and just like that he quit. But the truth is he wasn’t much different sober. Silver Spring’s loving care allowed Norman to live out his life on his own terms. Silver Spring’s finest hour lasted 25 years.

This monument was sculpted and donated by Fred Folsom in 1991. 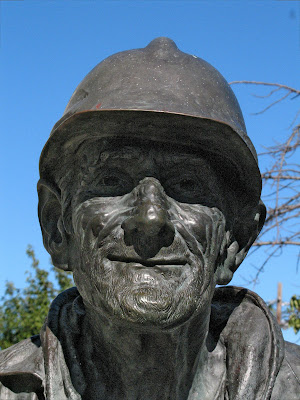 Norman Lane wore a variety of hats. When I met him in the mid 1980's, he wore a hard hat with "The Mayor" printed on one side and "Silver Spring Autobody" on the other, just the way he's shown in the memorial. 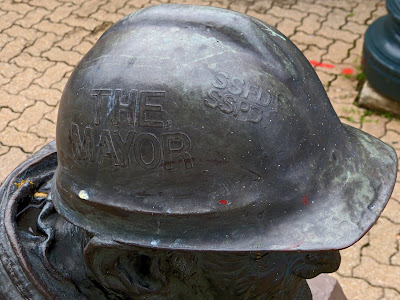 I remember he asked me for money, on several occasions, and as I remember it, I gave him some but I can't honestly swear that I did. 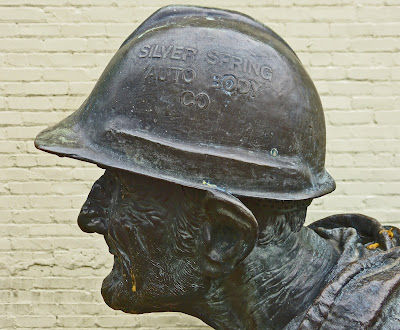 The back alley paralleling Georgia Avenue where he lived at Silver Spring Autobody came to be punningly called "Mayor Lane" after Mayor Norman Lane. 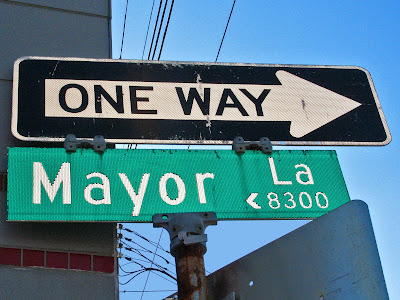 And the perpendicular alley between Mayor Lane and Georgia Avenue became "The Mayor's Promenade." 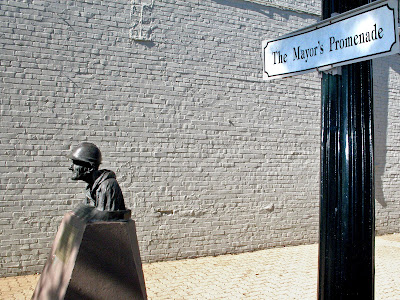 The monument is the work of Fred Folsom, an artist who once worked in a nearby art store and a long-time friend of Norman Lane. He erected the monument at his own expense in 1991, four years after Lane was found dead in an abandoned car in 1987. This photo of the clay original of Fred Folsom's statue is on his web page. 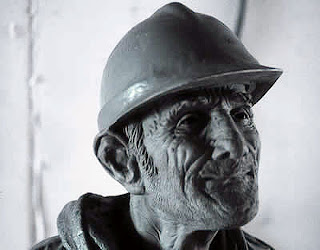 He also painted this oil painting of Norman Lane called "Pull-ups"; it'll only cost you $3500. 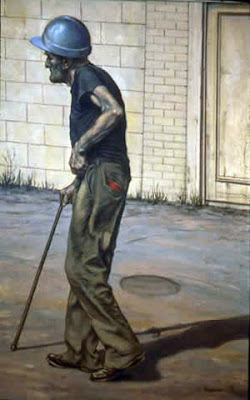 The Mayor often slept in the back room of Bob Phillips' Silver Spring Autobody shop. But  Henry Allen pointed out that "...Norman wasn't homeless. A sister built him an apartment in her basement, the county gave him an apartment in Takoma Park, but he wanted to live in his alley, which has been renamed 'Mayor Lane'." After Norman's death the Autobody shop put up this sign. This picture was modified from a photo on Jerry McCoy's blog. 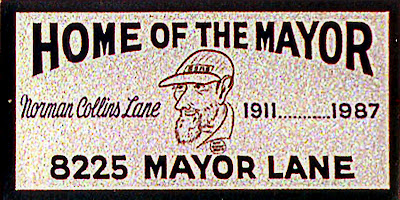 The sign disappeared in 2003 and the building that housed Silver Spring Autobody was torn down in 2010. The concrete floors are still there at the end of the promenade. 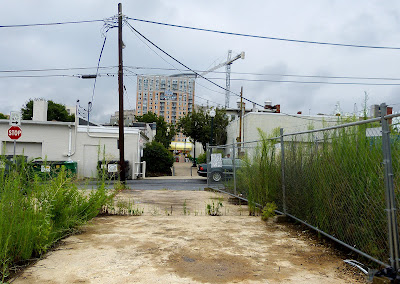 Fred Folsom said of Norman Lane that "He was a genius" and described his sculpture of this "picture of misery" as not so much a work of art as "a work of humanity." 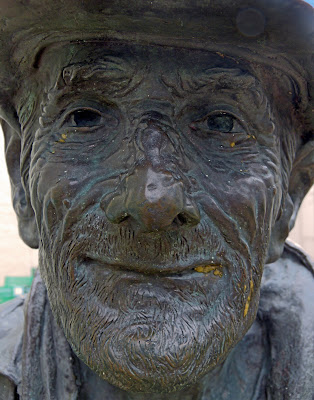 Don't Worry About It.
Posted by Allen Browne at 7:28 PM