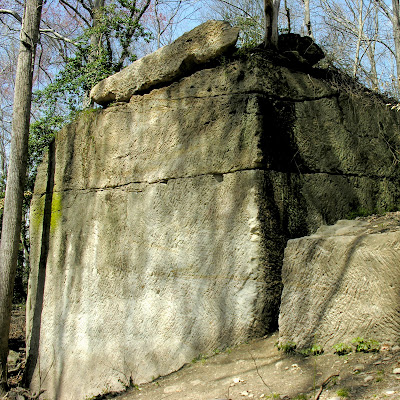 The poorly consolidated Cretaceous sandstone quarried here became the foundation of early Washington, D.C., architecture. The stone quarried here was used in a variety of locations in Virginia including William's Ordinary in Dumfries, Aquia Church, and Gunston Hall. George Washington, who had used Aquia freestone for the steps at Mt. Vernon in 1786, selected the Aquia freestone as the building material for the White House and U.S. Capitol buildings in the new Federal District.  Pierre L'Enfant purchased Wigginton's Island also known as Brent's Island on behalf of the U.S. Government for $6,000 on Dec. 2, 1791, to provide access to the freestone that was quarried there.  Brent's Island came to be called the Public Quarry and in modern times, Government Island. This portrait of L'Enfant by Bryan Leister appears on the signage at Government Island. 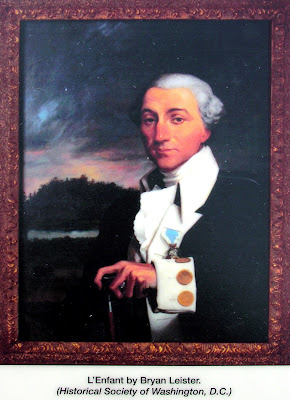 The "island" is a peninsula at the confluence of Austin Run and Aquia Creek just down from Aquia Harbour. 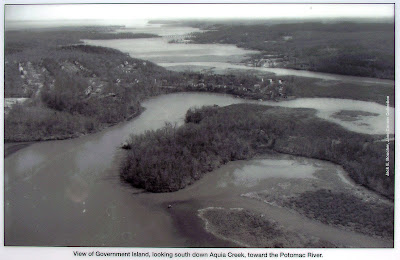 The government bought all but one acre of the island. That acre belonged to Robert Stuart, a Washington stonemason. His initials on this stone mark one of his boundaries. 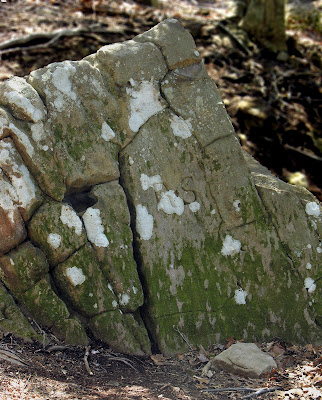 Lichens cover much of the R in RS. 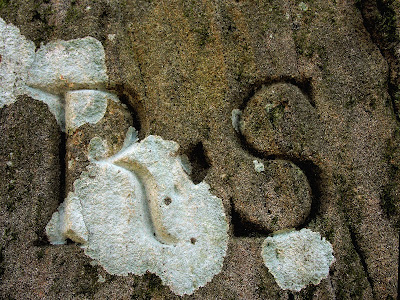 The boundary stones of Washington, set in 1791 and 1792 by Ellicott and Bannecker, were cut from Aquia freestone. This one is NE-2 on the edge of Takoma Park. 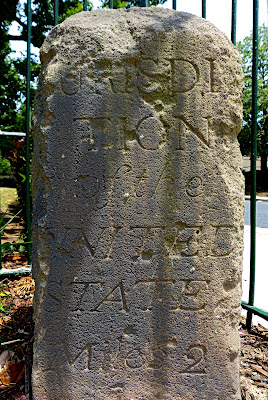 These crumbling quoins in the walls of Fort McHenry are Aquia sandstone. 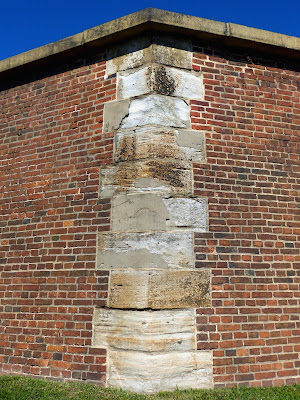 The stone was used for both the White House, then called the President's Palace, and the U. S. Capitol building. In both cases the sandstone exterior was painted white to prevent the discoloration and decay typical of this stone. This piece of Aquia sandstone from the White House is in the Smithsonian. 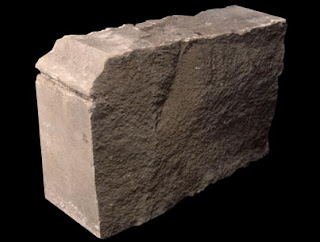 The Smithsonian says that the Aquia stone "contains too much clay to be very durable. It also has other flaws (not visible here) that can cause big problems for a building stone: isolated large pebbles and clay lumps, and uncemented areas." In 1851, Prof. Walter R. Johnson, in an article on the relative strengths of building materials, referred to Aquia sandstone as "the worthless material of which the Patent Office is constructed" and remarked that it "is acknowledged to be among the worst building materials to be found in the country."

These Corinthian columns from the Capitol are made of Aquia sandstone. 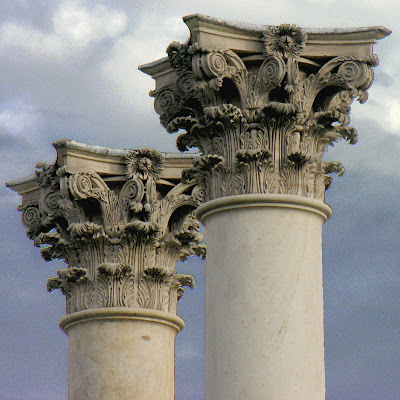 This close look at the sandstone of the columns shows one of  the holes that tend to develop in Aquia stone. 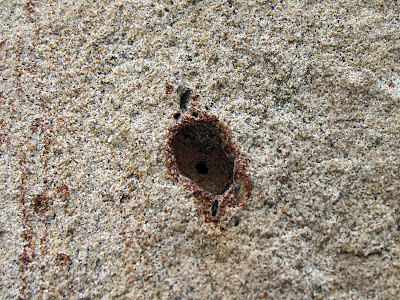 The original Capitol gateposts, also of Aquia sandstone, can be seen in various places in Washington. This one is at 15th Street and Constitution Avenue, near the Washington Monument. Its state of discoloration and decay is apparent. 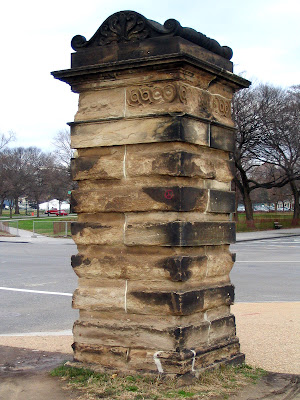 The Capitol Visitors Center uses this piece of Aquia Standstone as their "Slave Labor Commemorative Marker" to represent the enslaved African Americans who quarried the stone and built the Capitol. 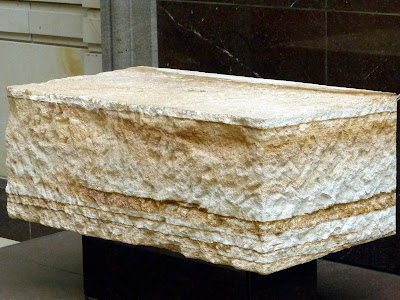 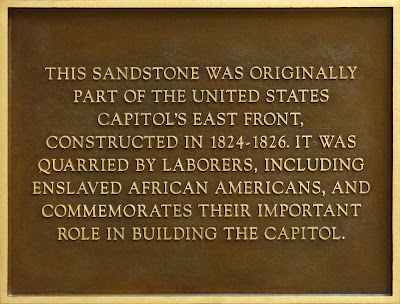 This sandstone was orignally
Part of the United States
Capitol's east front
Constructed in 1824 - 1826 It was
Quarried by laborers, including
Enslaved African Americans, and
Commemorates their important
Role in Building the Capitol.

The Labrobe cenotaphs in Congressional Cemetery are carved from Aquia Sandstone. Here's the cenotaph of John Quincy Adams seen from the rear, showing the texture of the sandstone. 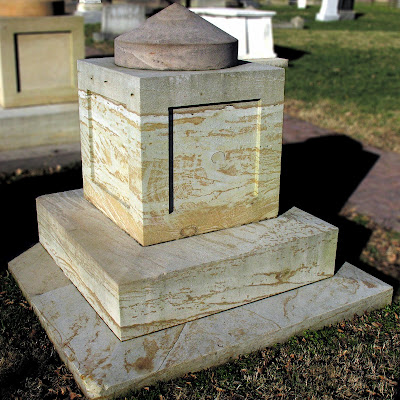 This closer look at Adam's cenotaph shows the cross bedding typical of the Aquia stone as well as the discoloration and pitting that made it Washington's bad sandstone. 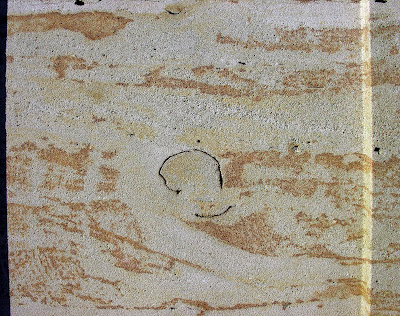 In spite of its poor quality, Aquia freestone was quarried on Government Island and used in government construction until the middle of the 19th century when the quarry fell into disuse. Jim Hall in the Free Lance - Star tells this story:  "In 1849, someone suggested that stone from the island be used in the construction of the Smithsonian Institution.The Chairman of the building committee said he didn't want it even if it was free. By the Civil War, the quarry was closed and abandoned."

In 1980, Jane Henderson, now Jane Connor, a Falmouth school teacher, wrote a research paper on the island as part of an independent study course at Mary Washington College. She became a major advocate for preservation of Government Island. In 2002 she testified before Congress in support of HR. 261, a resolution to recognize the historic significance of Government Island.

Today Government Island is a Stafford County  park. The tool marks left by the workers, who were a mixture of enslaved African Americans and foreign workers, are still clearly visible in the rock, as is the cross bedding that betrays the stone's sedimentary origin. 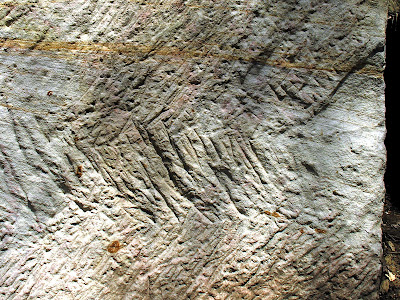 The squared-off 20-foot cliffs of the quarry are interpreted for visitors. 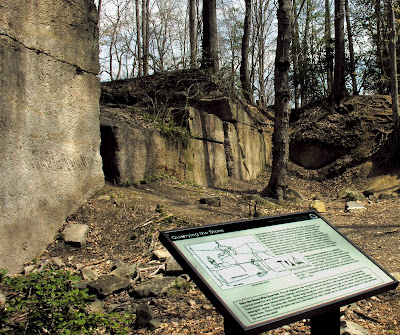 The sign explains how stone was cut at the quarry: 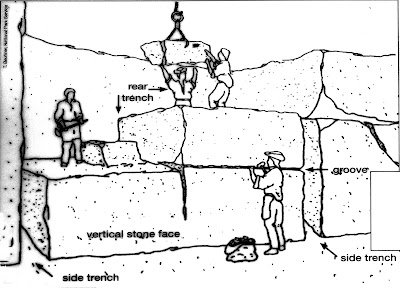 Side and rear Trenches were cut into the rock face and large blocks were split off. The trenches are wide enough for an old man to fit in with binoculars and camera. 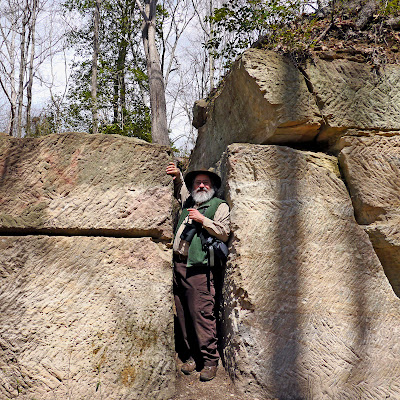 These girls are playing in the back trench. 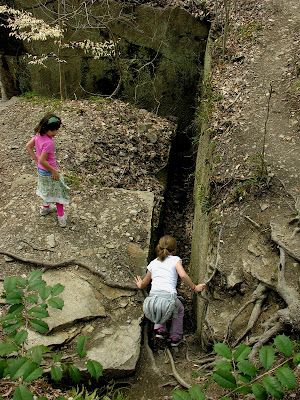 Clovis folk lived here 10,000 years ago. This fragment of a characteristic spear point is shown on a sign at Government Island Park. 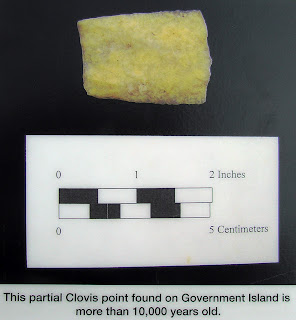 Out on US Route 1 -- it's Jefferson Davis Highway here -- this billboard alerts passersby to the newly opened park on Government Island. 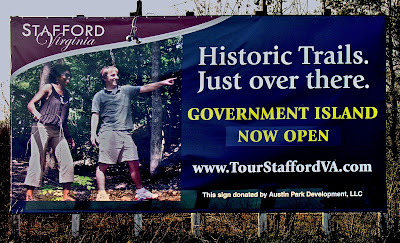