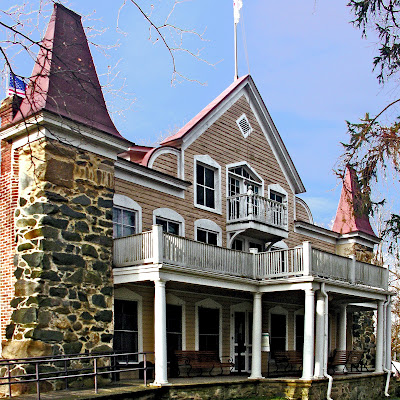 Clara Barton spent her last years in this building. An historical marker on MacArthur Boulevard in Glen Echo summarizes the significance of this site. 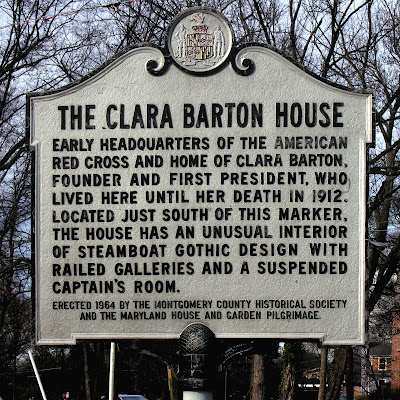 Early headquarters of the American Red Cross and home of Clara Barton, founder and First President, who lived here until her death in 1912. Located just south of this marker, the house had an unusual interior of Steamboat Gothic design with railed galleries and a suspended captain's room.

Erected 1964 by the Montgomery County Historical Society and Maryland House and Garden Pilgrimage. 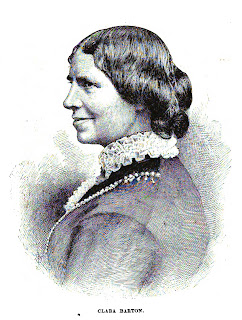 Dr. Julian B. Hubbell, a friend and colleague of Barton's, built this house in 1891-2 using prefabricated materials salvaged from the Red Cross Hotel on Locust Street in Johnstown, Pennsylvania, which had been used by the Red Cross during flood relief efforts in 1889. The basic shape of the house follows that of the old hotel. 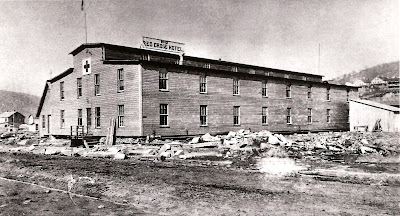 Hubbell built it on land donated by Edwin and Edward Baltzy, brothers who were developing a resort community around the National Chautauqua Assembly. The Baltzy brothers hoped to gain prestige for their project by luring the Angel of the Battlefield and the Red Cross to their community. The utilitarian wooden structure received a stone front to make it conform to the stone architecture of the Chautauqua buildings. The high stone front with a big red cross on it hid the high center of the wooden structure. 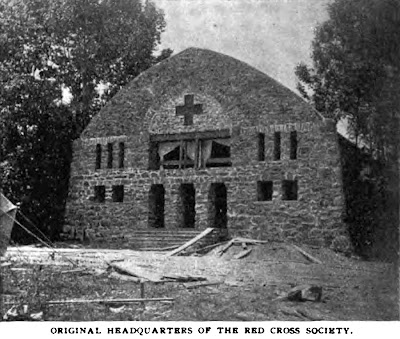 The building was used by the Red Cross for storage until Miss Barton moved-in in 1897. S. L. Hetterson in the Chautauquan, 1898, wrote that Miss Barton "has something of a man's love of light and air." She tore down the heavy stone facade but retained stone towers on the corners of the wooden building. This sketch from Munsey's Magazine, 1912, shows the result. 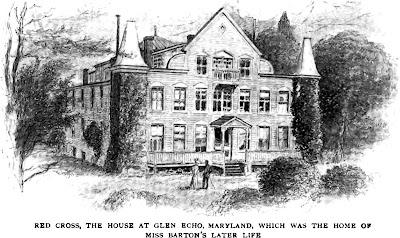 The front porches were added after Clara Barton's death by Mr. Hubbell or his nieces sometime before 1942. 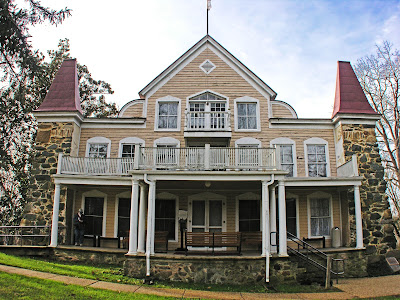 This view of the house from Epler, 1915, shows the Glen Echo trolley tracks running in front of the house. 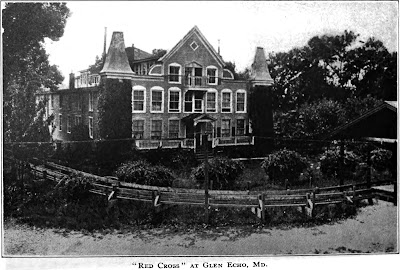 The interior of the structure is said to resemble that of a steamboat with 36 rooms and 38 large closets arranged in three tiers around the center hall. The stockpiling of emergency supplies was a basic purpose of the Red Cross. The closets contained stored emergency supplies. 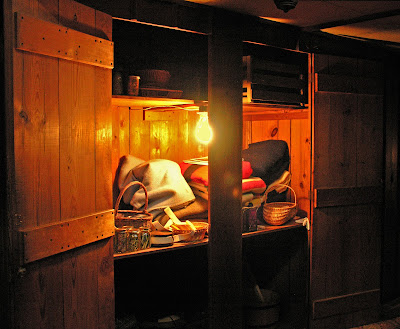 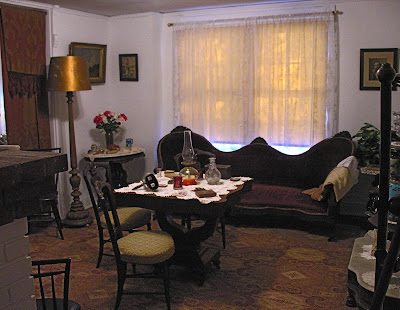 The building was not just Miss Barton's home but also the headquarters of the American Association of the Red Cross. Stained glass windows on the doors at the end of the central hall indicate that they lead to the Red Cross offices. 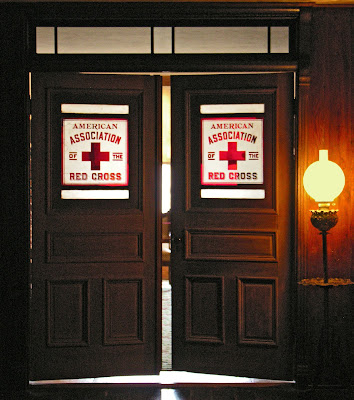 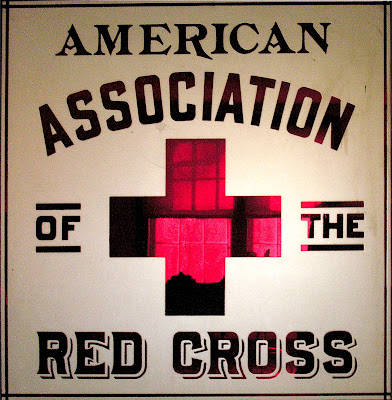 Through the stained glassed doors we find Miss Barton's office. 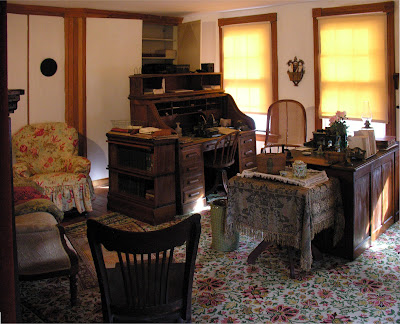 This photo from the NPS signage shows Miss Barton at her desk in this office. 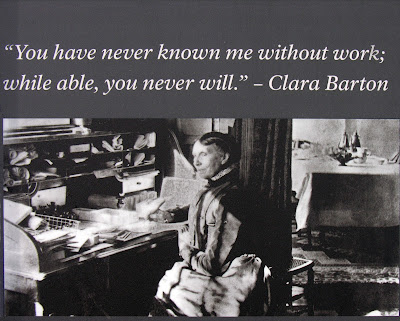 You have never known me without work; while able,you never will. -- Clara Barton


The suspended "Captain's Room" which hangs at the top of the front peak of the building stands behind these Red Cross windows. 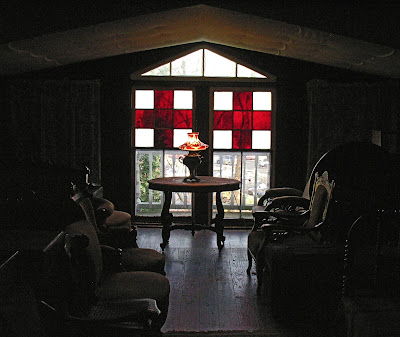 Tommy, Clara's beloved cat, looks over the dining room from an 1885 portrait by Antoinette Margot. 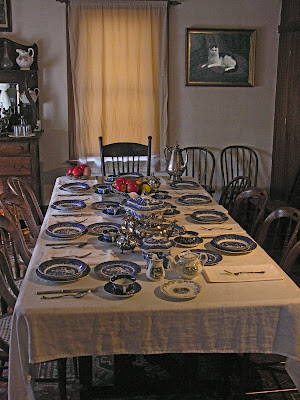 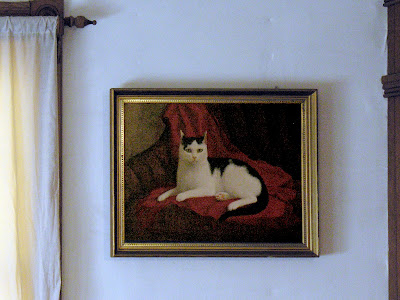 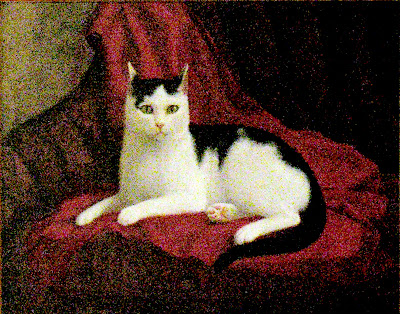 A few months after Clara Barton died in this house on April 7, 1912, Alice Hubbard wrote: