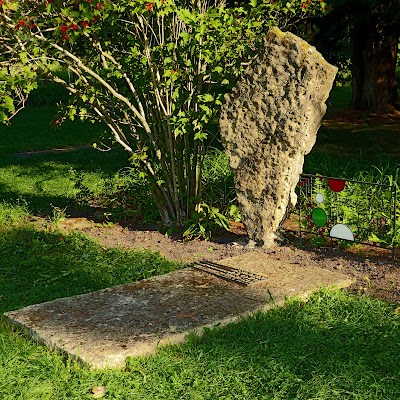 
Wright’s body lay in state in the living room of Taliesin as dozens of people in the Taliesin Fellowship, along with old friends from Spring Green and Madison filed past the casket. He was dressed in a light tan suit, white shirt, with a loosely knotted string tie, and his trademark flowing cape and pork pie hat. His casket was draped in a Cherokee red pall. The Wisconsin State Journal reported:


“His face was pale but seemed composed, and every familiar line of the features known throughout the world seemed sharply etched against the orange-red background of the drapery.”

The casket was loaded onto a grain wagon covered with pine boughs, and hauled behind two farm horses, on the one-mile trip from Taliesin to Unity Chapel. His wife, Olgivanna, his daughter Iovanna, and about 50 close friends made the slow, solemn, almost hour-long march to the chapel. As the procession left Taliesin, the bell at the chapel began tolling and continued until the procession reached there.

The Rev. Max Gaebler, minister of the First Unitarian Church in Madison (a 1947 Wright designed building) conducted the service. he described Wright as “a great man and a great artist, but more than that, a beloved husband and father.” He also quoted from Stephen Spender, John Donne, Ralph Waldo Emerson, and the Bible.

This  FLW-esque grave marker was designed by Taliesin fellows, perhaps by John Ottenheimer. The upside-down standing stone reminds many of the inverted helix of the Guggenheim Museum... 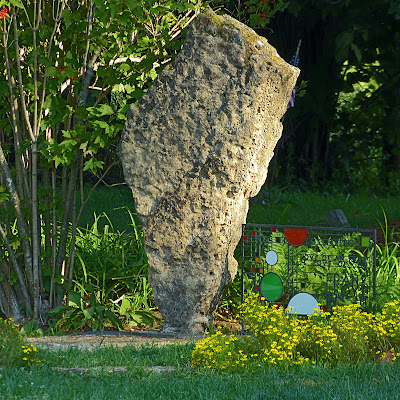 ...and the glass and steel epitaph is reminiscent of the Clerestory Windows at the Avery Coonley Playhouse. 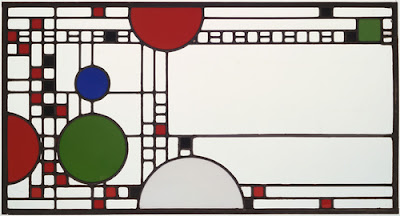 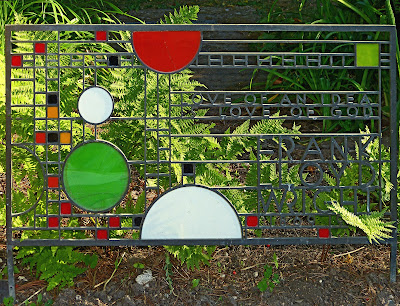 Love of an Idea
is Love of God
Frank
Lloyd
Wright

Wright's name on the horizontal stone echoes an architect's lettering with guidelines. 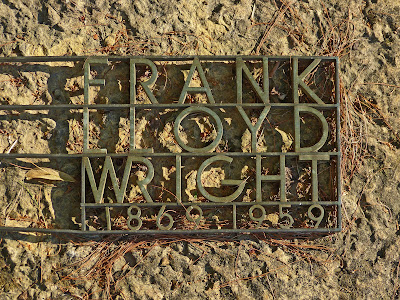 When his last wife, Olga Ivanova Milanov Hinzenberg, known as Olgivanna, died, she had Wright's body exhumed, cremated and the ashes mixed with hers buried at Taliesin West in Scottsdale, Arizona. 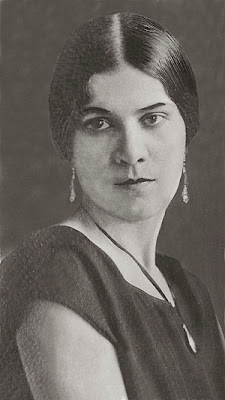 
Frank met Olgivanna in 1924 when he was separated from but still married to his second wife, Maude "Miriam" Noel. Frank married Olgivanna in 1927 after living scandalously with her at the "Love Castle," Taliesin East in Spring Green, Wisconsin. Olgivanna may have wanted to move Frank's remains from Unity Chapel cemetery because of his proximity there to his former mistress, Mamah Borthwick Cheney. 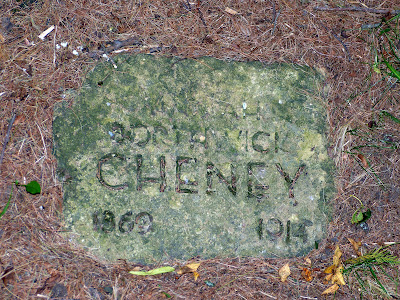 Mamah was the wife of Edwin Chaney for whom Wright designed the Edwin H. Cheney House in Oak Park, Illinois. 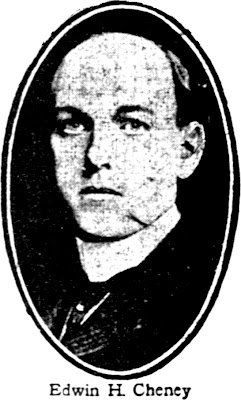 Mamah reverted her name to Mamah Borthwick even before she divorced her husband in 1911. 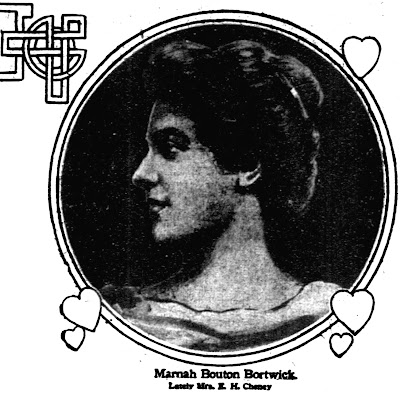 She and Wright traveled together in  Europe in 1909, a trip Wright publicly referred to as a "Spiritual Hegira." The couple continued their affair, openly living together at Taliesin after their return and Mamah's divorce. This scandal was widely reported in American newspapers. 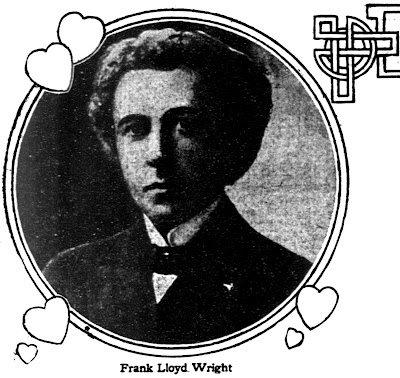 The photos above are from a disapproving  article in the Washington Herald entitled "Now It's the Spiritual Hegira."

In August of 1914, Wright's cook, Julian Carlton, set fire to the breakfast room at Taliesin and, as Mamah and her children fled the smoke, Carlton attacked them with an axe. Taliesin was destroyed.  Mamah, her two children, three of Wright's associates, and the son of one associate were killed. This headline in the Ogden (Utah) Standard told the lurid tale. 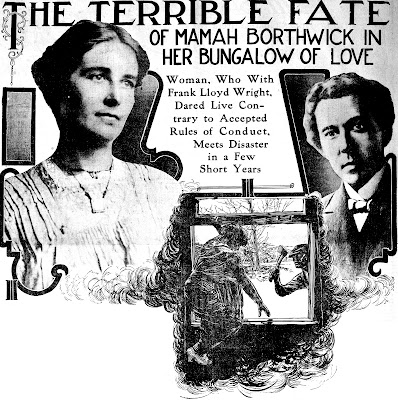 The Terrible Fate
of Mamah Borthwick in Her Bungalow of Love
Woman, Who With Frank Lloyd Wright, Dared Live Contrary to Accepted Rules of Conduct, Meets Disaster in a Few Short Years

The Bisbee (Arizona) Daily Review carried a short article with a picture of the ruins of Taliesin and the axe used in the murder.

Carlton cheated the public of its vengeance by starving himself to death before he could be tried and never explained why he committed the murders. As the Bemidji Daily Pioneer explained it on October 9, 1914:


LOVE BUNGALOW KILLER DIES
Negro Slayer of Seven Succumbs From Starvation.
Dodgeville, Wis., Oct. 9. — The last word of the story of Love Bungalow was written when Julian Carlton, the negro chef who killed seven persons at the Spring Green home of Frank Lloyd Wright and Mamah Borthwick Cheney, died of starvation. He had refused to eat since his arrest following the tragedy. He was unconscious at the end and during his entire time in the jail made no statement as to his reasons for his crime. When he was arraigned in court a week ago on a murder charge his case was postponed because of his weakness.

After her death, Wright had Mamah Borthwick buried in the Unity Chapel Cemetery in a grave marked only with a large pine tree.

In his grief, Wright refused to let the undertaker touch the body of the woman he had loved. Instead, he had his own carpenters fashion a simple wooden box for her. There was no funeral either. The coffin was placed on a plain farm wagon, covered with flowers, and drawn by horses. Wright's son John and two cousins helped him bury her in the little cemetery behind his mother's family chapel. "I wanted to fill the grave myself," Wright remembered. "No monument yet marks the spot where she was buried.... Why mark the spot where desolation ended and began?" -- Burns, Ken. "The Master Builder." Vanity Fair. 459 (November 1998), pp. 302-318.

In 1985, when Olgivana posthumously had Frank Lloyd Wright's body exhumed, she also had Mamah's grave marked. As Ron McCrea says in Building Taliesin, "Mamah, buried nearby, was given a stone marker reading 'Mamah Borthwick CHENEY' emphatically restoring to her the married name she had renounced when she began to live with Frank Lloyd Wright." 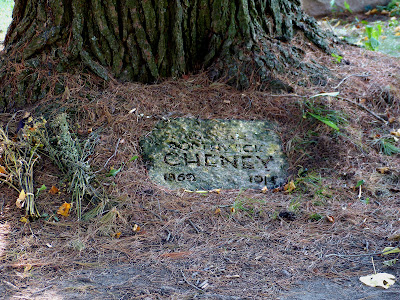 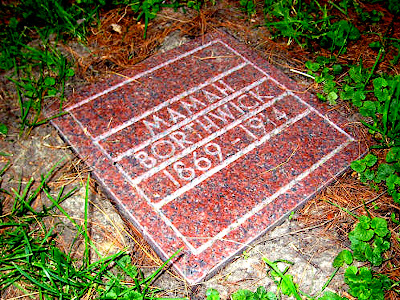 The Wisconsin State Journal in August of 2009 notes that, "Ottenheimer's gravestone plan was foiled when a great-grandson of Frank Lloyd Wright, Lloyd Natof, of Chicago, happened to see the gravestone in his family's private cemetery. He didn't know where it came from, but he knew it was not permitted." Ultimately, the Unity Chapel cemetery board decided that the original stone should be restored.

Here, Jan considers whether the corn fields that surround the Unity Chapel were once Wright family property. 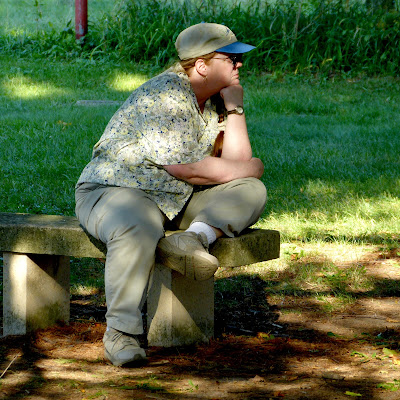