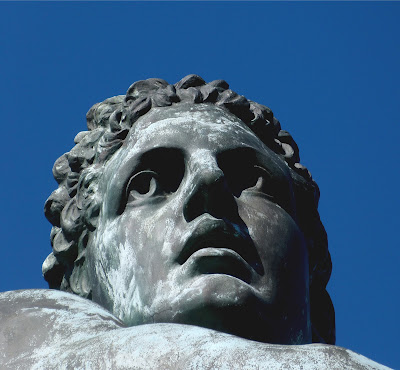 
This 24-foot-tall statue of Orpheus stands near the entrance to Fort McHenry National Monument and Historic Shrine  as a monument to Francis Scott Key. 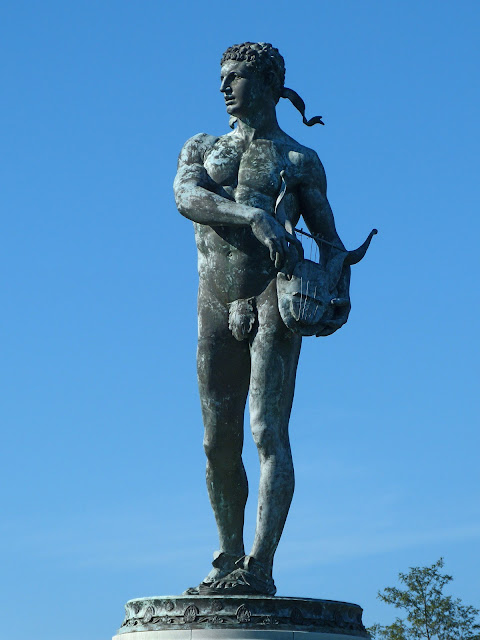 It is often thought to be a statue, albeit dressed in a fig leaf, of the famous lawyer and poet himself. This NPS historical marker puts that thought to rest. 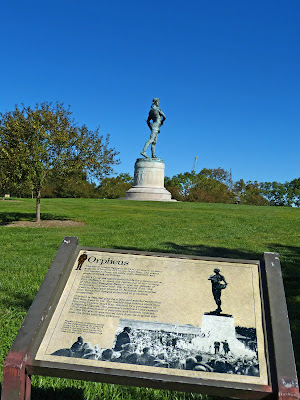 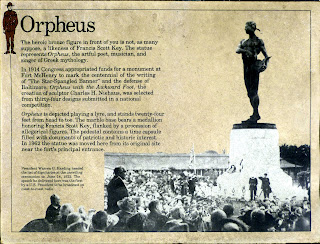 Orpheus -- The heroic bronze figure in front of you is not, as many suppose, a likeness of Francis Scott Key. The statue represents Orpheus, the artful poet, musician, and singer of Greek Mythology.

In 1914 Congress appropriated funds for a monument at Fort McHenry to mark the centennial of the writing of “The Star-Spangled Banner” and the defense of Baltimore. Orpheus with the Awkward Foot, the creation of sculptor Charles H. Niehaus, was selected from thirty four designs submitted in a national competition.

Orpheus is depicted playing a lyre, and stands twenty-four feet from head to toe. The marble base bears a medallion honoring Francis Scott Key, flanked by a procession of allegorical figures. The pedestal contains a time capsule filled with documents of patriotic and historical interest. In 1962 the statue was moved here from its original site near the fort's principal entrance.

President Warren G. Harding headed the list of dignitaries at the unveiling ceremonies on June 14, 1922. The speech he delivered here was the first by a U.S. President to be broadcast on coast-to-coast radio.

The idea for this monument to Francis Scott Key first developed during Baltimore's Star Spangled Banner Centennial in 1914 at the outset of the First World War.

In his 1918 report, Baltimore Mayor James H. Preston listed "Monuments, Tablets and Other Memorials of a Permanent Nature Resulting From the Centennial." The first entry concerned the "Congressional Monument".


The $75,000 Congressional Monument in honor of Francis Scott Key and the Defenders of Baltimore is nearly completed,and there is now some hope of having the central structure of this noble work of art (by Niehaus) erected in the near future at Fort McHenry. The completion of the outer circle of seats must await the close of the war.

In fact, the erection of the whole monument had to wait until the war was over. A design competition in 1916 was won by Charles Niehaus. A 1917 article in Art and Archaeology by Frank Owen Payne praised the statue effusively and included this photo by G. Ording of the Sculptor Niehaus with his creation. 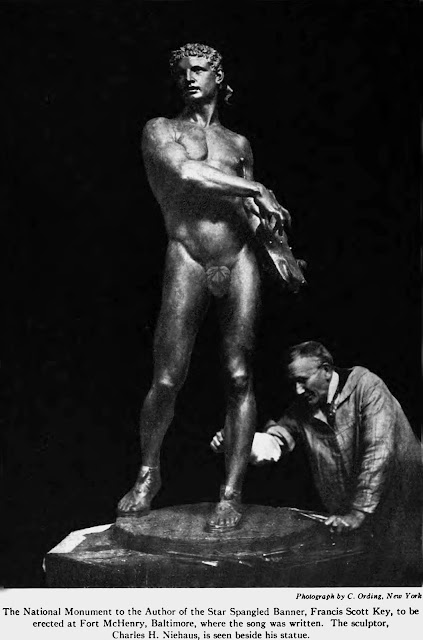 The National Monument to the Author of the Star Spangled Banner, Francis Scott Key, to be erected at Fort McHenry, Baltimore, where the song was written. The sculptor, Charles H. Niehaus, is seen beside his statue.


In this memorial the sculptor has paid a tribute not only to the poet who wrote the song, but by representing a colossal figure of Orpheus, he has paid an equally splendid tribute to the genius of music. It is most gratifying to note that the sculptor has had the courage to make a symbolical figure and thus to honor the sublime art of music. Thus he has given us an Orpheus instead of presenting the world with one more unlovely portrait of mere man. For this he deserves our profound thanks. 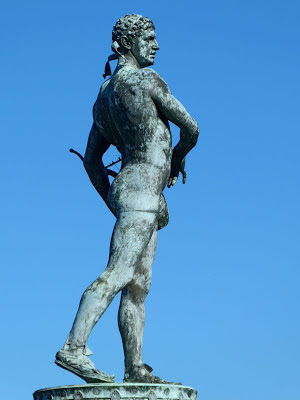 As Cindy Kelly points out, not everyone agreed that Niehaus should be thanked for his conception.


The choice of the figure of Orpheus to memorialize Key has long been debated. Key's relatives complained to Congress that the statue in no way typified the spirit or patriotism that led Key to write his poem. A great many admirers of Key's agreed that it was an inappropriate solution. Hans Schuler certainly agreed; he had competed with a heroic figure of Key himself while Niehaus said he had been unable to come up with such a figure and thus had turned to allegory.

But this really is a monument to Francis Scott Key. 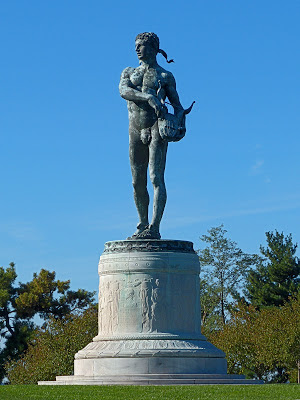 A medallion on the 15-foot cylindrical base of the monument testifies to that purpose. 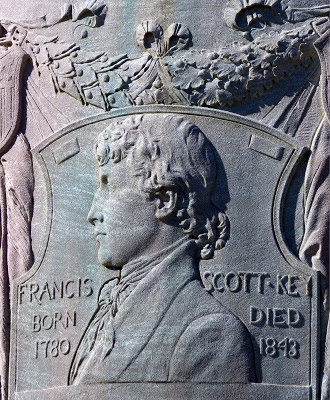 A variety of  "classical figures" cavort around the base of the monument. 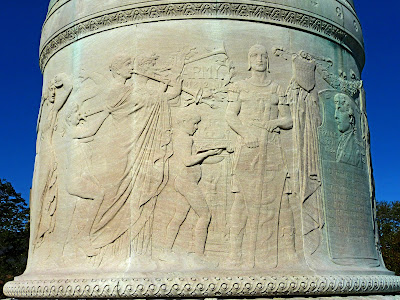 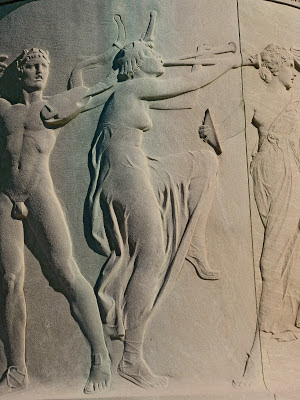 This newer NPS marker relates that the monument was finally dedicated on Flag Day, 1922. 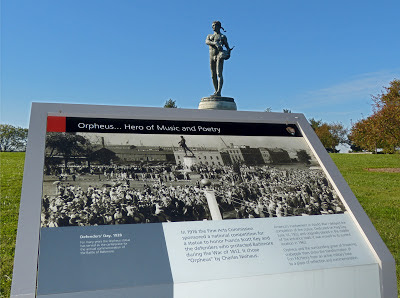 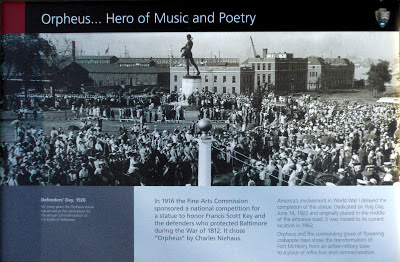 Orpheus... Hero of Music and Poetry

In 1916 the Fine Arts Commission sponsored a national competition for a statue to honor Francis Scott Key and the defenders who protected Baltimore during the War of 1812. It chose "Orpheus" by Charles Niehaus.

America's involvement in World War I delayed the completion of the statue. Dedicated on Flag Day, June 14, 1922, and originally placed in the middle of the entrance road, it was moved to its current location in 1962.

Orpheus and the surrounding grove of Flowering crabapple trees show the transformation of Fort McHenry from an active military base to a place of reflection and commemoration.

For many years the  Orpheus statue has served as the centerpiece for the annual commemoration of the Battle of Baltimore.

The statue was unveiled by Miss Ethel Broening and Miss Marie J. Niehaus, the daughters of the Mayor of Baltimore and the Sculptor, respectively. A photo of the still flag-draped statue during the ceremony appears in the NPS Cultural Landscape Report on Fort McHenry. 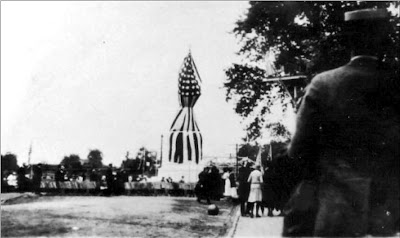 It was the age of the automobile and the radio. President and Mrs. Harding motored from Washington to Baltimore for the dedication ceremony. Warren G. Harding became the first President to speak on radio when his speech was broadcast coast-to-coast from radio station WEAR in Baltimore. Harding was the first president to own a radio. He had the first radio installed in the White House in February of 1922.

In 1922, Fort McHenry was still being used as a receiving hospital for the wounded of the World War. In this NLM photo, nurses at Hospital No. 2 pose behind a Civil War era Rodman gun. 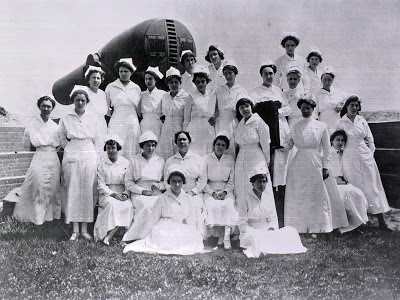 The NY Times reported that:


After a buffet luncheon at the Emerson, the President drove to Fort McHenry. While an audience of several thousand was assembling within the grounds of the fort, the President and Mrs. Harding went to a hospital for wounded veterans of the A. E. F. They visited one ward and then stood outside and received the other patients. Into the hand of each wounded man who passed Mrs. Harding thrust a flower from a huge bouquet that had been presented to her earlier in the day.

As he began his speech it began to drizzle, and the President remarked that "It would be no disrespect to the President for anyone to take shelter ... as for me, I am a Baptist..." He went on to remark that:


Francis Scott Key, though he produced some splendid lines which are less familiar than they deserve, was not a great poet. He was less, but he was also more than a great poet. He was possessor of a patriotism which in a supreme moment could make words and meters its creatures and servitors, and so a modest genius was raised in one flaming hour to a place among the immortals. That the song became instantly popular, and that when set to music, it was immediately adopted as the anthem of militant Americanism, testifies that already more than a century ago, the conviction of a great nationalism and a great destiny had taken hold upon the American people.

While I can only agree with President Harding that Key was not a great poet, it is patently untrue that any of his less familiar lines are less familiar than they deserve. The Star Spangled Banner, the "anthem of militant Americanism" in 1922, didn't become the national anthem until 1931 when Congress passed a bill sponsored by John Charles Linthicum who also offered remarks at the 1922 dedication of the Francis Scott Key memorial.

At the time of its dedication, the statue of Orpheus is said to have been the largest cast bronze statue in existence. Of course, the most remarkable thing about the Orpheus statue is its state of undress. Orpheus wears two pieces of clothing, a head band... 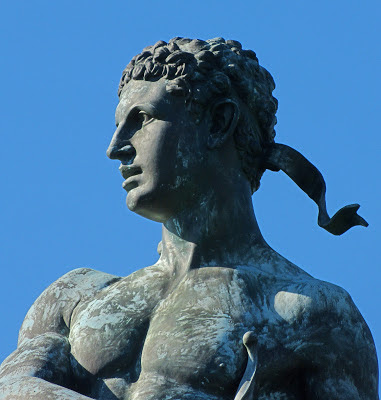 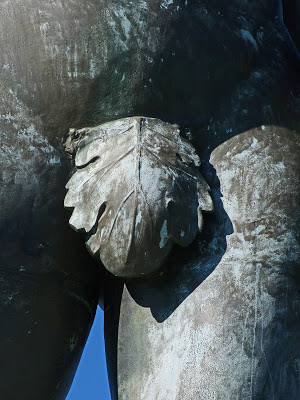 While the leaves of Ficus carica are traditionally used to add modesty to nude statues, I'm unaware of another statue in which the leafy codpiece plays so prominent a part. 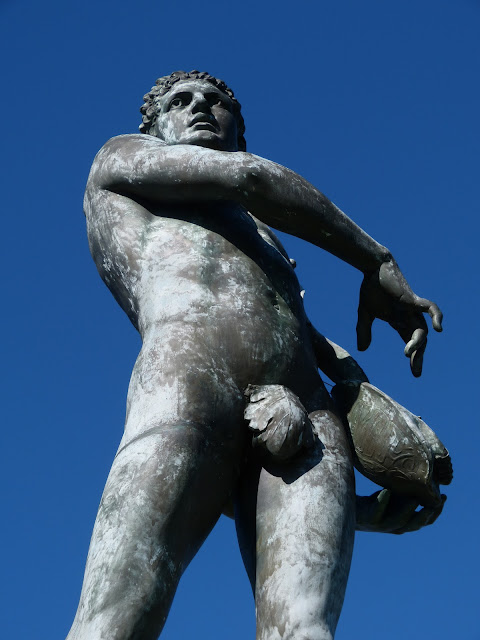