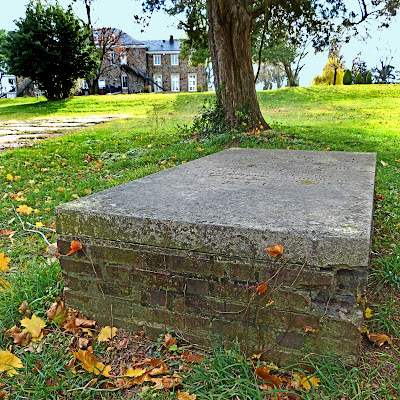 This cenotaph in the back yard of the Pallotine Seminary at Green Hill in Chillum, Maryland, marks the spot where Pierre L'Enfant was buried in 1825.

Pierre Charles L'Enfant died penniless here in a friend's house and was buried in an unmarked grave in a grove of cedar trees. When his star had risen in the 20th century, his body was exhumed in the spring of 1825 and moved to Arlington Cemetery. In the fall of 1825, Col. Elisha Francis Riggs, the owner of Green Hill at the time, had this brick and limestone cenotaph erected. 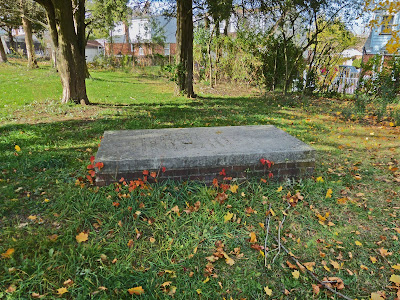 The epitaph is in Latin: 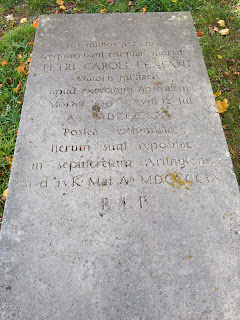 Major Pierre Charles L'Enfant is most famous for laying out the city of Washington in 1791. His plan determined the location of the Capitol and White House as well as the basic street grid of Washington with its numbered and lettered streets and diagonal avenues named for the states. 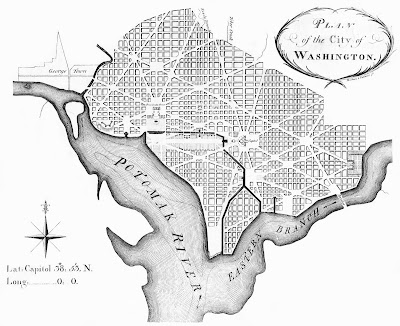 L'Enfant's Plan of the City of Washington
as modified by Andrew Ellicott.

Born in Paris in 1755 to an aristocratic family, L'Enfant came to America in 1778 to join the Continental Army as a Captain on the Staff of Baron Von Steuben. He had been a Lieutenant in the French provisional service since 1777. He was severely wounded in 1779 at the Seige of Savannah and as a consequence carried a cane for the rest of his life. He was taken prisoner at Charleston in 1780 and exchanged six months later. In 1783, he was brevetted Major. 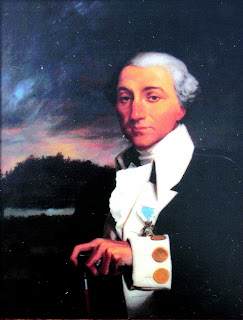 Brian Leister's portrait of L'Enfant
from an historical marker at Government Island.

After the Revolution, he practiced architecture in New York. In 1788, he successfully enlarged and remodeled New York's City Hall into Federal Hall where the Congress met in New York and where Washington was inaugurated.

Federal Hall as re-designed by L'Enfant

He was a charter member of the Society of the Cincinnati and designed their medal.

He gave up everything to serve the republic

In 1791, L'Enfant was chosen by Washington to plan the newly designated Federal City. He submitted his plan for the city and leased the Aquia sandstone quarry at Government Island. He worked well with Washington but quarreled  with the three commissioners Washington appointed to supervise the project. He ran into even more opposition when he had the house that Daniel Carroll of Duddington was building torn down because it encroached on what would become New Jersey Avenue, SE. Daniel Carroll of Duddington was the nephew of another Daniel Carroll (of Rock Creek) who was one of the commissioners. Washington fired L'Enfant in march of 1792. This disgrace began the slide into poverty that characterized the Major's later life. He had a series of commissions but quarreled with his employers and never finished any of them. He repeatedly memorialized Congress to pay him (excessively) for his work on the Capital City.

The Major then became an unsuccessful petitioner before Congress for a redress of his real and fancied wrongs, and he was to be seen almost every day slowly pacing the rotunda of the Capitol. He was a tall, thin man, who wore, toward the close of his life, a blue military surtout coat, buttoned quite to the throat, with a tall, black stock, but no visible signs of linen. His hair was plastered with pomatum close to his head, and he wore a napless high beaver bell-crowned hat. Under his arm he generally carried a roll of papers relating to his claim upon the Government, and in his right hand he swung a formidable hickory cane with a large silver head. A strict Roman Catholic, he received a home in the family of Mr. Digges, near Washington, in whose garden his remains were interred when he died.

In his last failed commssion, he was asked to re-design Fort Warburton after its disastrous destruction in 1814, but he quarreled over expenses with Secretary of State James Monroe and was replaced. In the course of the initial survey for the new fort, L'Enfant met and was befriended by colorful novelist, revolutionary, and spy, Thomas Attwood Digges, who owned the Digges estate at Warburton.  Digges' novel, The Adventures of Alonso, published in London in 1775, is said to be the first novel written by an American. 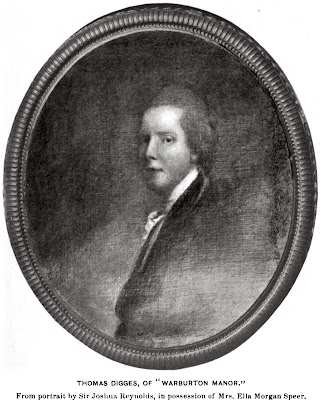 Thomas Digges of "Warburton Manor"
by Sir Joshua Reynolds
(Bowling questions the attribution of this painting.) 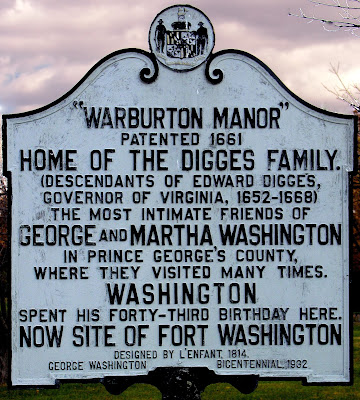 "Warburton Manor" - Patented 1661 - Home of the Digges Family (descendants of Edward Digges, Governor of Virginia, 1652–1668). The most intimate friend of George and Martha Washington in Prince George’s County, where they visited many times. Washington spent his forty-third birthday here. Now site of Fort Washington. Designed by L’Enfant 1814. George Washington Bicentennial, 1932

The old major is still an inmate with me quiet, harmless, and unoffending as usual. I fear from symptoms of broken shoes, rent pantaloons, out at elboes &c. &c., that he is not well off -- manifestly disturbed at his getting the go by -- never facing towards the Fort tho' frequently dipping into the eastern ravines & hills of the plantations -- picking up fossils and periwinkles  -- early to bed & rising -- working hard with his instruments on paper 8 or ten hours every day as if to give full and complete surveys of his works.

But Digges confesses he never saw any of  L'Enfant's plans. The old major would spend his last 11 years at Warburton. In the 1820 census, L'Enfant identified himself as P. Charles L'Enfant, a white male U.S. citizen over the age of 40 living at Warburton. He was 65 years old and had never officially naturalized.

L'Enfant hung on at Warburton three years after Thomas Attwood Digges died in 1821, as the old mansion fell into disrepair. In March of 1824, he accepted an invitation from Thomas Digges' nephew, William Dudley Digges, to live with him at his estate, Green Hill, also known as Chillum Castle Manor after a landmark in the Digges ancestral home of Kent County in England. Ironically, Digges wife, Eleanor, was the daughter of Daniel Carroll of Duddington whose house L'Enfant had  peremptorily torn down back in 1791.

This image of the Green Hill entitled "Major L'Enfant's Final Resting Place"  appeared in  George Alfred Townsend's  Events at the National Capital and the Campaign of 1876. 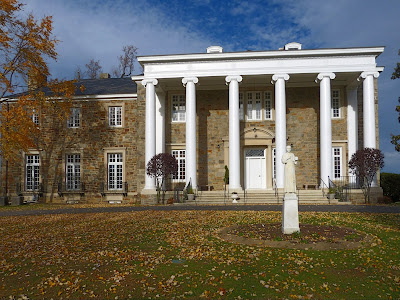 Built in the early 19th century by William Dudley Digges and substantially enlarged by the Riggs family in the late 19th century, Green Hill today is a Pallottine Seminary.

In June of 1825, the old major died at Green Hill and was buried in an unmarked grave in the back garden, surrounded by red cedar trees. 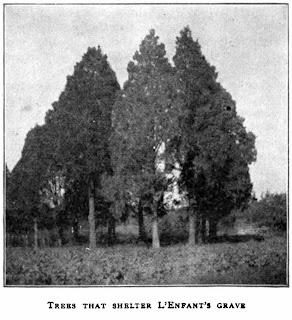 
The cedar trees can still be seen today surrounding the cenotaph on the edge of an abandoned tennis court. 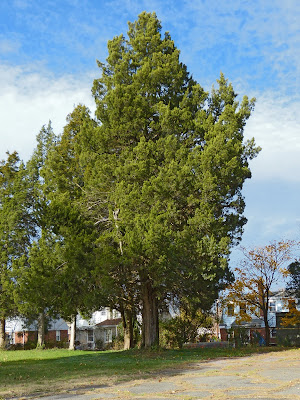 L'Enfant's obscurity lifted at the turn of the 20th century. As Kammen tells it in Digging Up the Dead:

Out of sight and very much out of mind for most of the nineteenth century, L'Enfant slowly began to regain public attention after 1881, when an anonymous article about him appeared in the New-York Tribune. Meanwhile, a retired Washington banker who now owned Green Hill decided to organize the architect's remaining effects, especially letters and documents of various sorts. In 1887 the Library of Congress published a facsimile edition of L'Enfant's plan for the District, and two years later Washington's newly organized Columbia Historical Society devoted its second volume of records to the origins of the city, including transcriptions of a selection of L'Enfant's memorials to Congress. By 1901-2 President Theodore Roosevelt had become quite friendly with Jules Jusserand, the French ambassador, who had strong interests in history and literature; they often played tennis together

Ambassador Jusserand wrote a biography of L'Enfant and did much to popularized the image of L'Enfant as a Revolutionary War hero and designer of the Capital. A movement arose to have L'Enfant's grave marked but E. Francis Riggs opposed building a monument and a road to it on his land. In 1908, Congress included this clause in the Sundry Civil bill of 1908: "One thousand dollars is made available for the Commissioners of the District of Columbia to remove and render accessible to the public the grave of Major Pierre Charles L 'Enfant."

In April of 1909,William Dudley Digges' grandson,  Dr. James Dudley Morgan, and others went to the old grave site to exhume L'Enfant's body. Morgan describes it this way:

It was a lonely and unmarked grave more than six feet in length. A graceful, red cedar, drawing its vigorous life from the very earth which enveloped the ashes of the neglected Frenchman, his sole monument for eighty-four years, swaying and whispering with every breeze, carried the inspiration of his genius into never-ending requiem, while its pungent odor served as perpetual incense. Nature, more generous than man, had drawn over the lonely mound a mantle of myrtle, like a pall of perennial green. 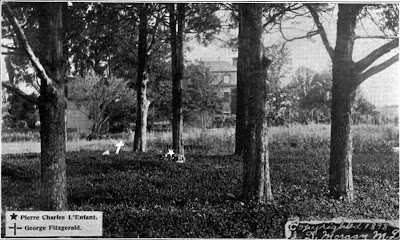 The cedar tree was cut down and the grave opened. The Washington Post wrote that "a layer of dicolored mold three inches in thickness, two pieces of bone, and a tooth were all that remained of the great engineer." These remains were gathered into a metal casket and taken to Mt. Olivet Cemetery and from there moved to the Capitol rotunda. The coffin was set on the catfalque used when Lincoln lay in state. L'Enfant was only the eighth person to lie in state at the Capitol. The root of the red cedar tree was used to make a gavel which was presented to the the Columbia Historical Society by Dr. Morgan.

On April 28, 1909, L'Enfant was re-interred at Arlington right in front of Arlington House with a magnificent view of Washington. In 1911, this neo-classical raised-tablet tomb designed by architect William Welles Bosworth with direction from AIA president Glenn Brown was erected over L'Enfant's body. 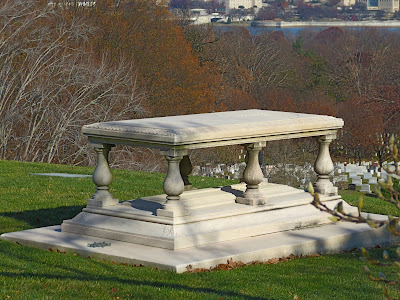 The top of monument includes a relief map of L'Enfant's plan for Washington and an inscription: 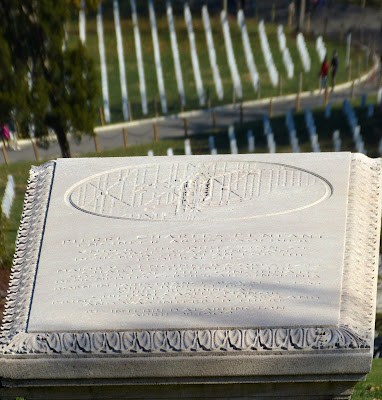 Pierre Charles L'Enfant; Engineer, Artist, Soldier; under the direction of George Washington, designed the plan for the Federal City; Major US Engineer Corps 1782;Charter member of the Society of the Cincinnati, designed its certificate and insignia. Born in Paris, France, August 2, 1755; Died June 14, 1825, while residing at Chilham Castle Manor, Prince George's Co., Maryland and was interred there. Re-interred at Arlington, April 28, 1909.