Patty Cannon and the Tangent Line 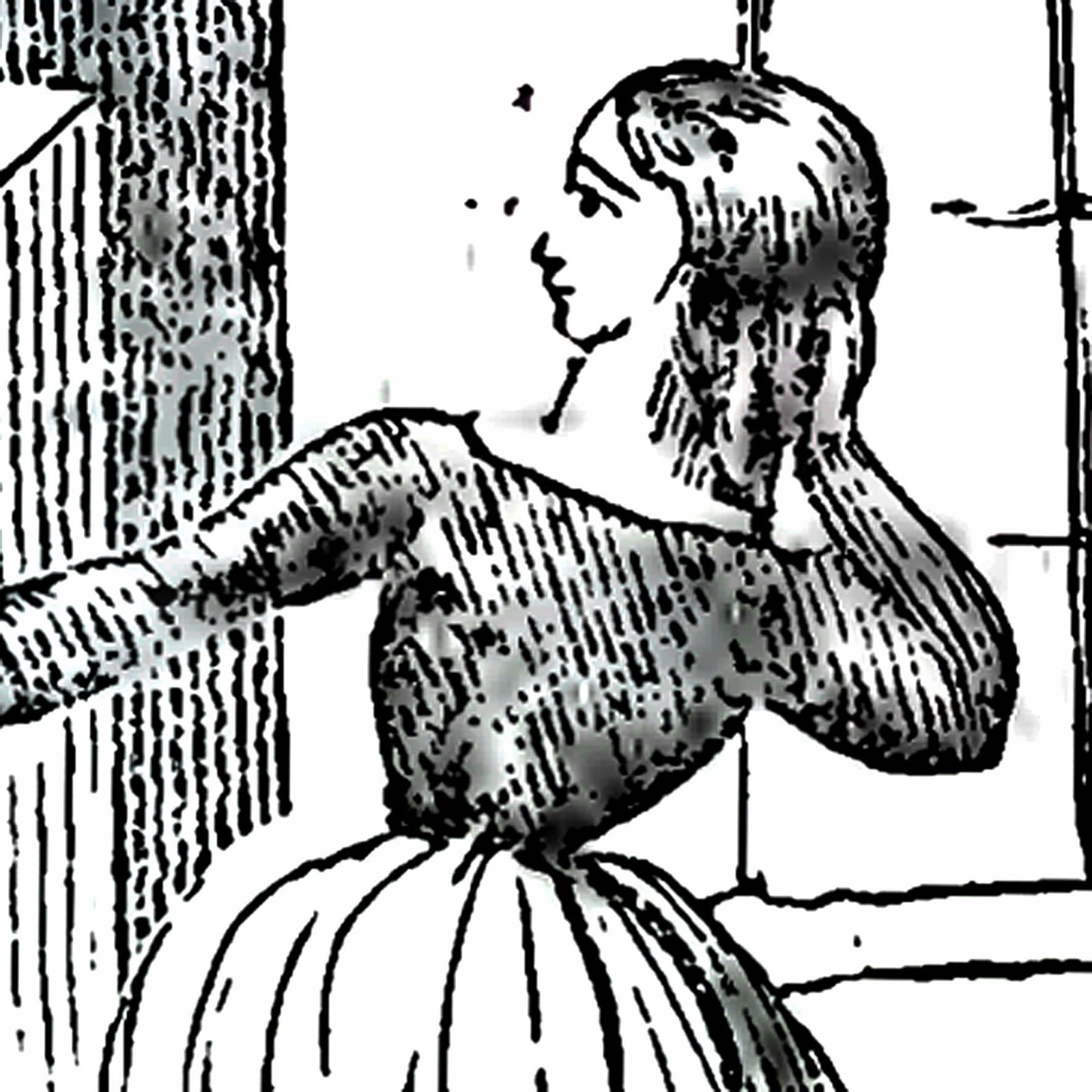 
The tiny crossroads town of Reliance has two businesses (a convenience store and a florist), two  historical markers, and a Mason-Dixon boundary monument.

This 1939 Maryland State Roads Commission marker in Reliance has been criticized, debunked, supplemented, and corrected.

At Johnson's Cross Roads where the noted kidnapping group had headquarters as described in George Alfred Townsend's novel "The Entailed Hat". The house borders on Caroline and Dorchester Counties and the State of Delaware.

James W. Loewen, in his 1999 book  Lies Across America, remarks that this marker is "the closest thing to a memory on the American landscape of the 'reverse underground railroad'...Other than 'kidnap' however, this marker conveys no hint of the reverse underground railroad."  Loewen further suggests that "Delaware should put up a marker, right across the road which serves as the border between the two states, that tells how the Cannon-Johnson Gang owned land and houses on both sides.That way they could avoid arrest simply by crossing to the other side, where their legal pursuers had no jurisdiction." In fact, Delaware did put up a marker in 2012, and it tells the story more fully. 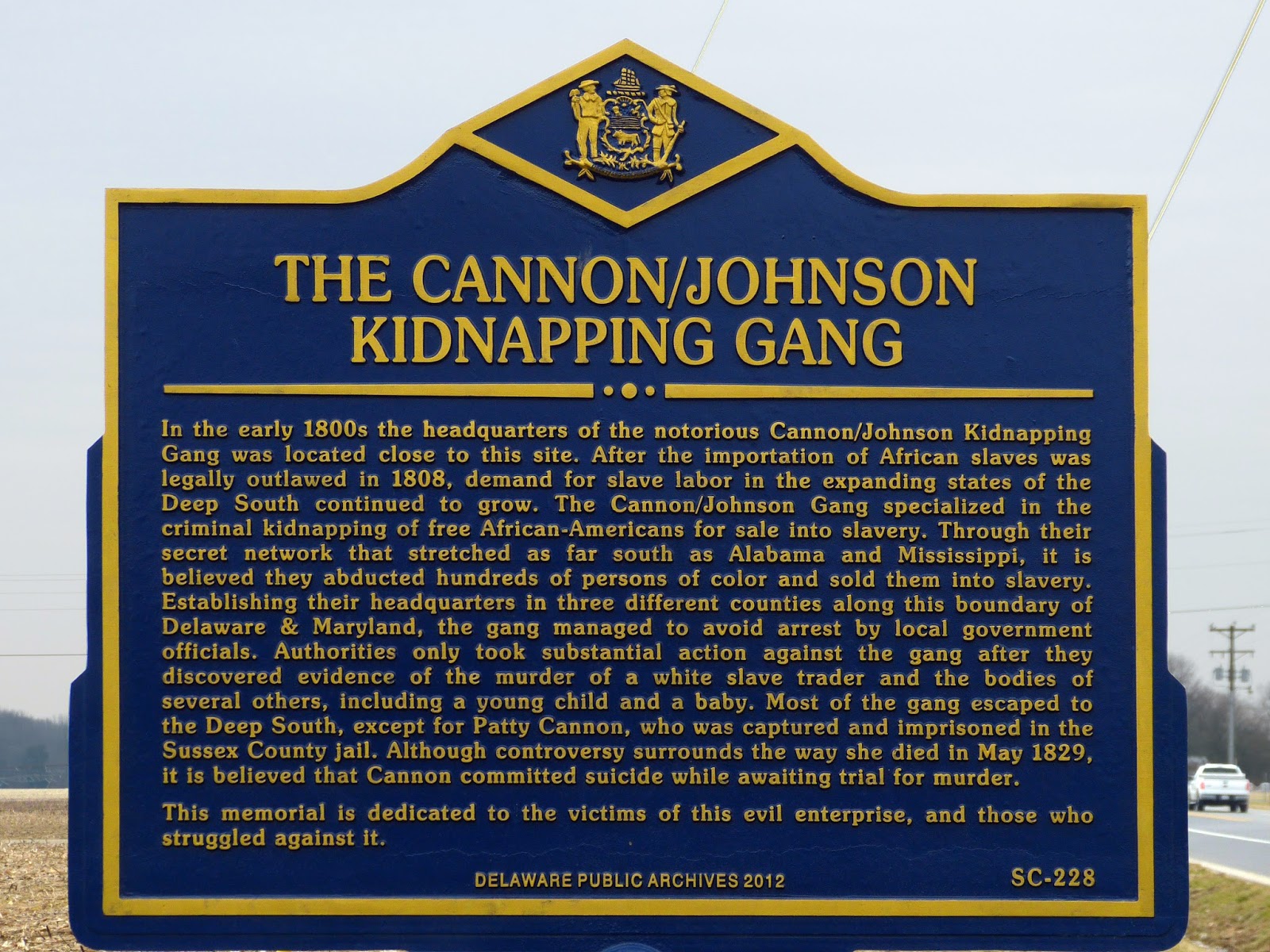 In the early 1800s the headquarters of the notorious Cannon/Johnson Kidnapping Gang was located close to this site. After the importation of African slaves was legally outlawed in 1808, demand for slave labor in the expanding states of the Deep South continued to grow. The Cannon/Johnson Gang specialized in the criminal kidnapping of free African-Americans for sale into slavery. Through their secret network that stretched as far south as Alabama and Mississippi, it is believed they abducted hundreds of persons of color and sold them into slavery. Establishing their headquarters in three different counties along this boundary of Delaware & Maryland, the gang managed to avoid arrest by local government officials. Authorities only took substantial action against the gang after they discovered evidence of the murder of a white slave trader and the bodies of several others, including a young child and a baby. Most of the gang escaped to the Deep South, except for Patty Cannon, who was captured and imprisoned in the Sussex County jail. Although controversy surrounds the way she died in May 1829, it is believed that Cannon committed suicide while awaiting trial for murder. This memorial is dedicated to the victims of this evil enterprise, and those who struggled against it.

This video makes it clear that Professor Kevin Brown, of Del. Tech. had the new marker erected in May of 2012 as an answer to Loewen's critique. Loewen himself appears in the video saying of the 1939 marker, "It never used the term slave or black or negro or anything else, never told anything about the story. It just had some weird things about Patty Cannon."
In 2004, the PBS history program History Detectives looked into the truth of the 1939 marker. and documented that the house behind the marker is not in fact Patty Cannon's house.


Although this house is on property once owned by Patty Cannon, her house burned down in 1948. The MD inventory of Historic Properties in 1977 said that "Nothing remains above ground of the house in which Patty Cannon dwelled north of Reliance in Caroline County... There is a claim that Patty Cannon's house is located at the intersection of Route 577 and 392, however this does not coincide with accounts that parts of her house were located in both Maryland and Delaware. It was Johnson's Tavern." The illustrated edition of "The Entailed Hat" includes this picture of Johnson's Tavern. 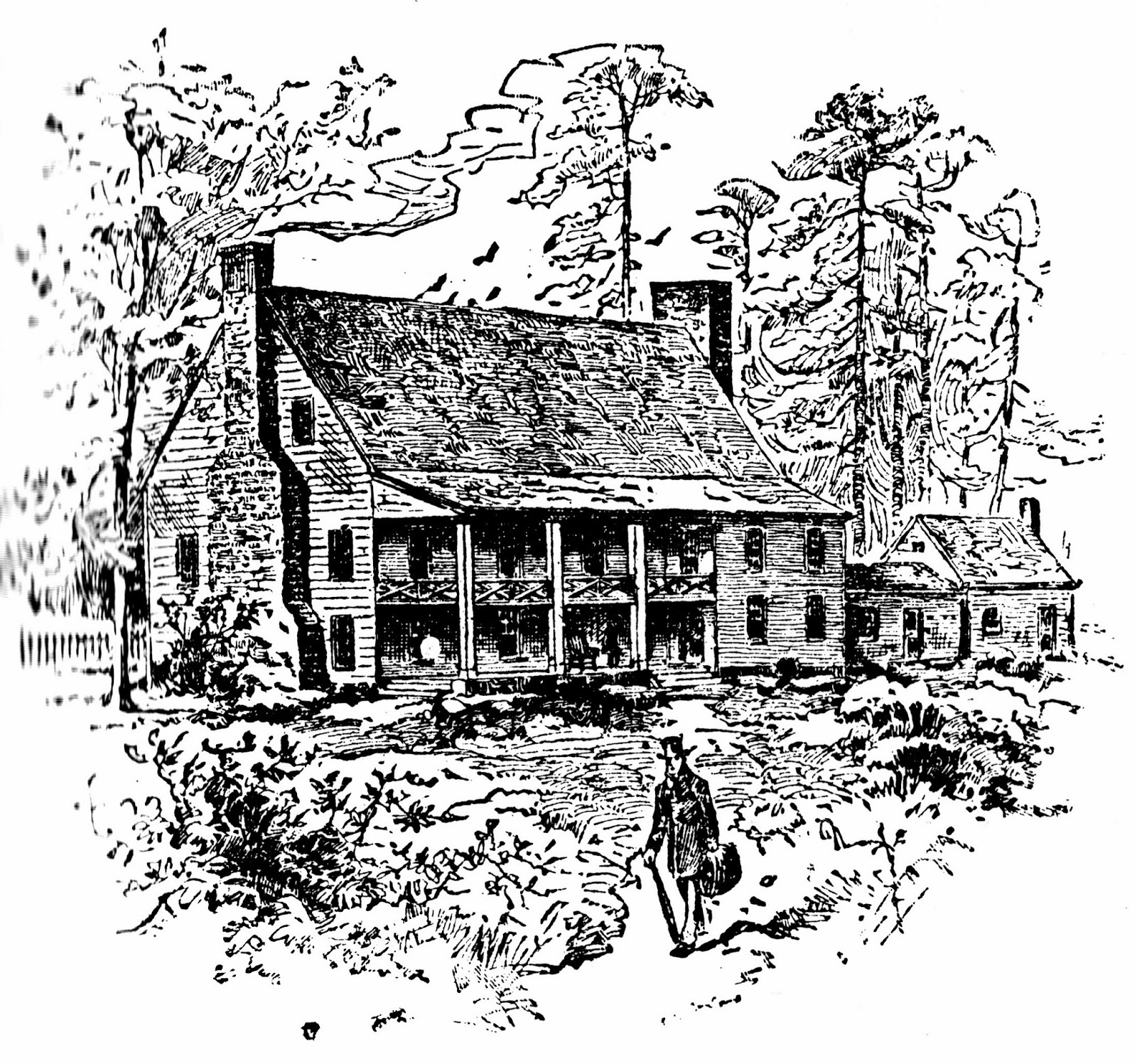 The town itself was called Johnson's Cross Roads in the 19th century; the name was later changed to escape the infamy of the Cannon/Johnson Gang.

Ecenbarger in 2000 quoted owner Jack Messick, "The timber and beams [of the old tavern] were used to build the present house about 1880, and it was remodeled in 1954. You can tell the beams were handhewn because you can see the marks from the adze. People occasionally knock on the door. Mostly they're interested in history or high school students working on a term paper. Once in awhile somebody's looking for dungeons and bloodstains, There have been a lot of rumors over the years of ghosts in the house, but we have no evidence of that."

Perhaps in response to the History Detectives, the words "nearby stood" have been added to the marker. 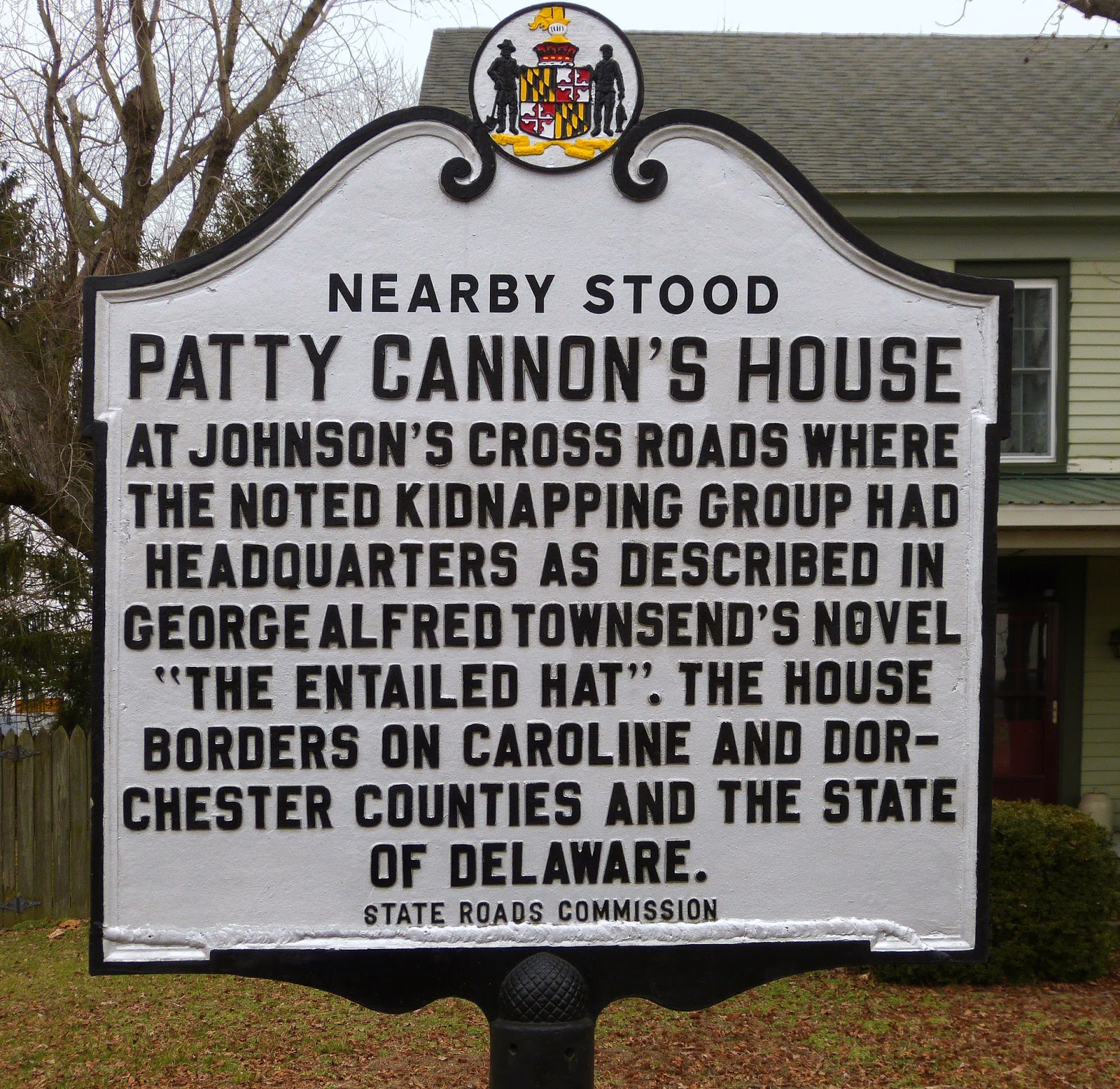 Patty Cannon has become the subject of a sizable body of sensational folklore.  As the marker notes, she is a major character in George Alfred Townsend's novel The Entailed Hat. In 1841, a highly sensationalized book was published entitled Narrative and Confessions of Lucretia P. Cannon, copyrighted by Erastus Barclay and Clinton Jackson. The  name "Lucretia" seems to be the invention of Barclay and Jackson. As Samuel Sober puts it, "The literature on Patty Cannon, member of the infamous Cannon-Johnson Gang whom the Narrative and Confessions is based on, began as factual accounts prior to 1830, shifted towards sensationalism in the late 1830s, and arrived at almost pure fictional “true-crime” with the 1841 Narrative and Confessions."

This illustration and account of Patty Cannon burning a black child to death appeared in the Confessions: 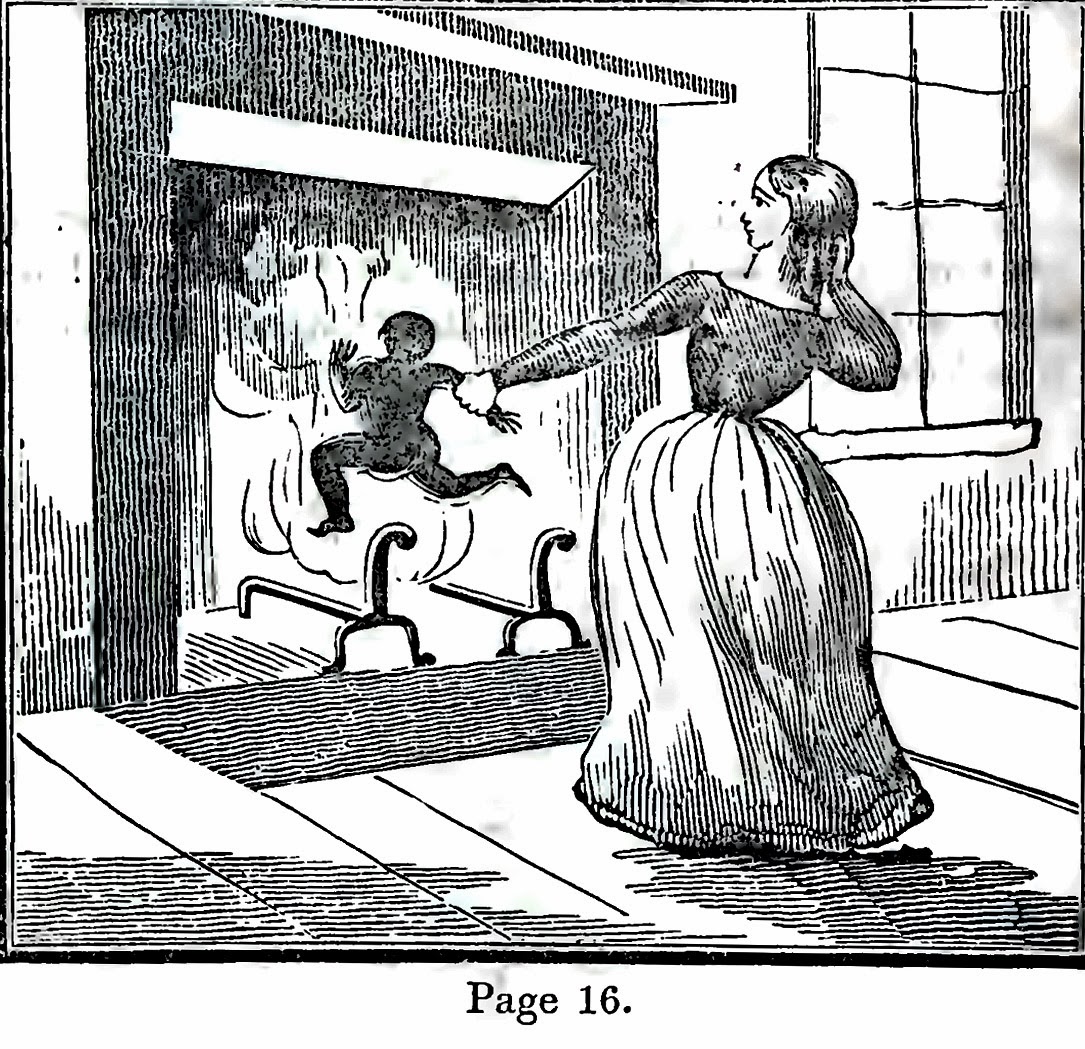 On one occasion one of the negro women had a little child about five years old sometimes subject to fits, and in these fits the child used to scream in a terrible manner. It happening to have one of these fits while in Lucretia Cannon's house, she became so enraged upon hearing its cries, that she flew at the child, tearing the clothes from off the poor victim of her wrath, beating it at the same time in a dreadful manner; and, as if this was not enough to satisfy her more than brutal disposition, the child continuing its cries, she caught it up and held its face to a hot fire, and thus scorched the child to death in her own hands burning its face to a cinder, she then threw it in the cave in the cellar.

As noted above, Patty Cannon died in a Delaware jail in 1829, perhaps by her own hand. She was buried in the yard of the jail. When the jail was expanded in 1907, her remains were exhumed to make way for a new parking lot. At that time, Patty Cannon's skull was stolen by James Marsh, a Sussex deputy sheriff who gave it to a friend, Charles Joseph. Joseph hung the skull on a nail in his barn. His son Alfred Joseph gave it to the Dover Public Library where it was displayed yearly on Halloween. 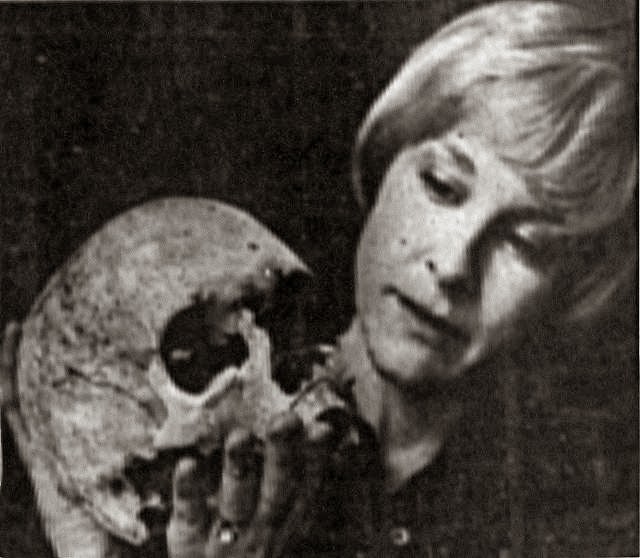 The skull of notorious kidnapper and killer Patty Cannon, shown in a 1977 News Journal photo, for many years was put on public display at Halloween. -- Delaware Backstory


Independently of the 20th century misdirection, images of Patty Cannon's Skull appeared in a number of 19th century phrenological works used to demonstrate her congenital depravity. This illustration is from "How to Study Strangers" by Nelson Sizer, 1895. 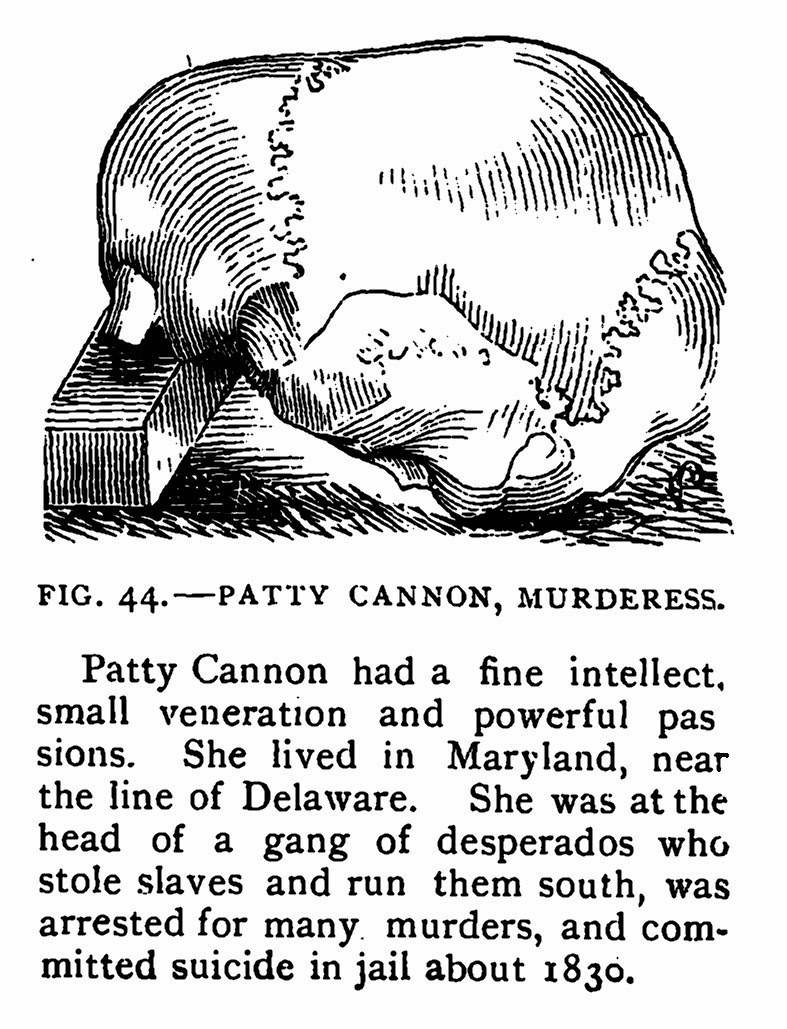 Patty Cannon had a fine intellect, small veneration and powerful passions. She lived in Maryland, near the line of Delaware. She was at the head of gang of desparados who stole slaves and run them south, was arrested for many murders, and committed suicide in jail about 1830.


The skull is now on long-term loan to the Smithsonian.

The  Cannon/Johnson gang are said to have taken advantage of their location on the boundary of Maryland and Delaware to avoid both Delaware and Maryland authorities. The Delaware-Maryland boundary here is the tangent line drawn by Mason and Dixon in 1764-5. Mason and Dixon marked this spot with a wooden post on July 5th, 1764, and placed this oolitic limestone marker at the crossroads in 1765. It was the twelfth mile marker on the tangent line connecting the center point of the Delmarva Peninsula and the circular boundary around New Castle. 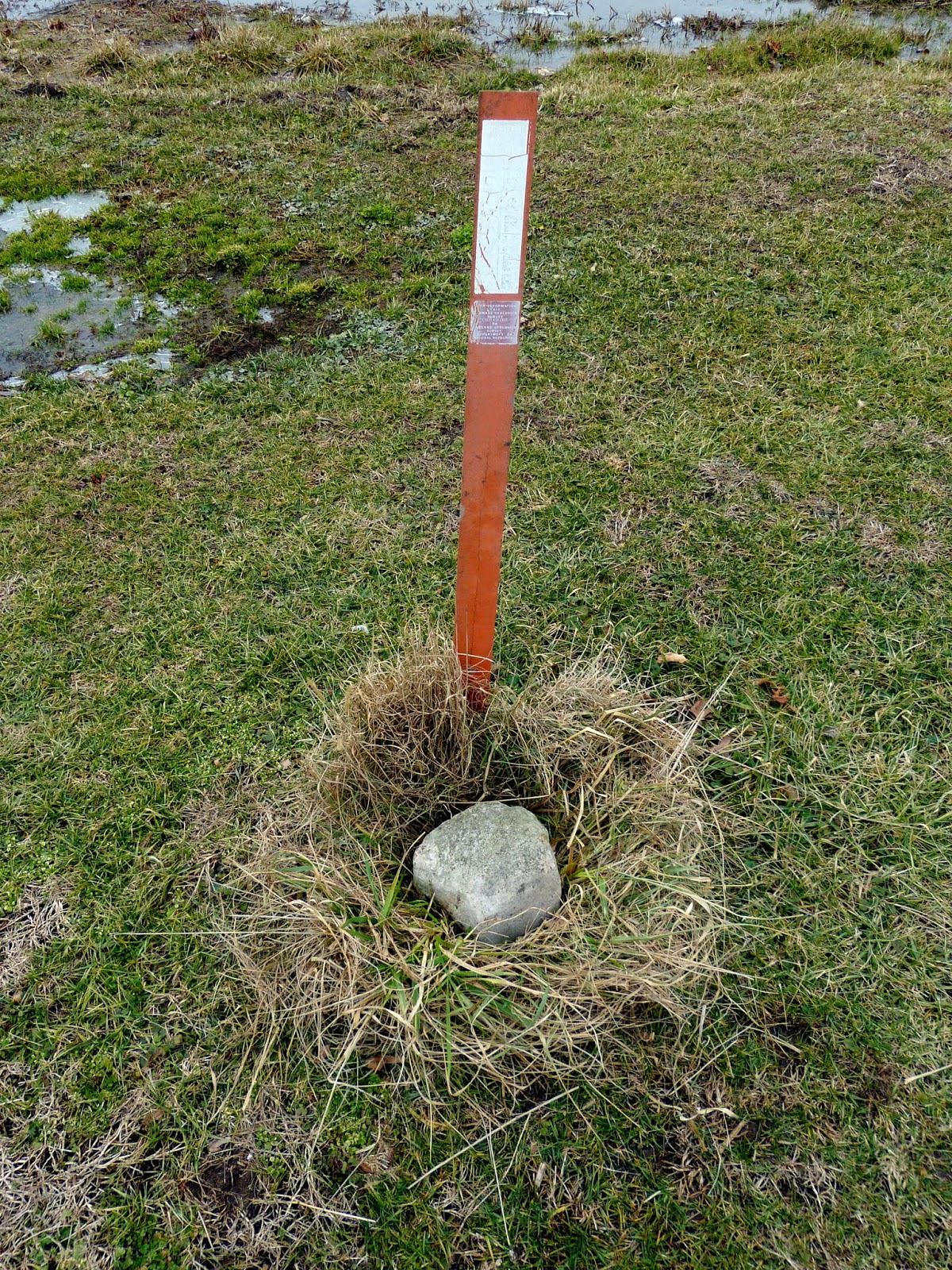 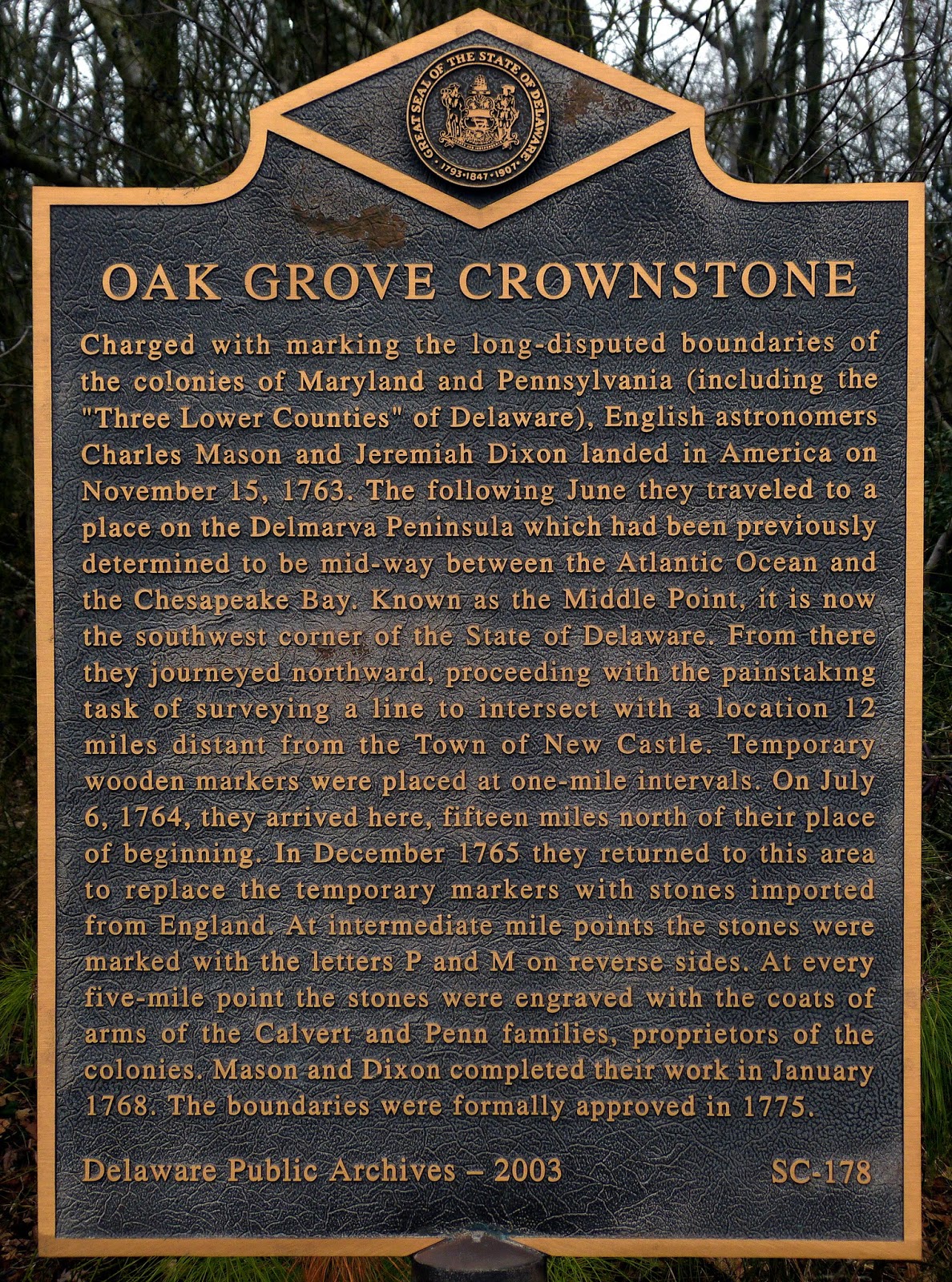 Charged with marking the long-disputed boundaries of the colonies of Maryland and Pennsylvania (including the “Three Lower Counties” of Delaware), English astronomers Charles Mason and Jeremiah Dixon landed in America on November 15, 1763. The following June they traveled to a place on the Delmarva Peninsula which had been previously determined to be mid-way between the Atlantic Ocean and the Chesapeake Bay. Known as the Middle Point, it is now the southwest corner of the State of Delaware. From there they journeyed northward, proceeding with the painstaking task of surveying a line to intersect with a location 12 miles distant from the Town of New Castle. Temporary wooden markers were placed at one-mile intervals. On July 6, 1764, they arrived here, fifteen miles north of their place of beginning. In December 1765 they returned to this area to replace the temporary markers with stones imported from England. At intermediate mile points the stones were marked with the letters P and M on reverse sides. At every five-mile point the stones were engraved with the coats of arms of the Calvert and Penn families, proprietors of the colonies. Mason and Dixon completed their work in January 1768. The boundaries were formally approved in 1775.

The 12-mile stone was hidden in the tall grass when I visited; only the orange witness post pointed to its location. I tramped the grass down to get these photos. The stone is right next to the Delaware Historical Marker... 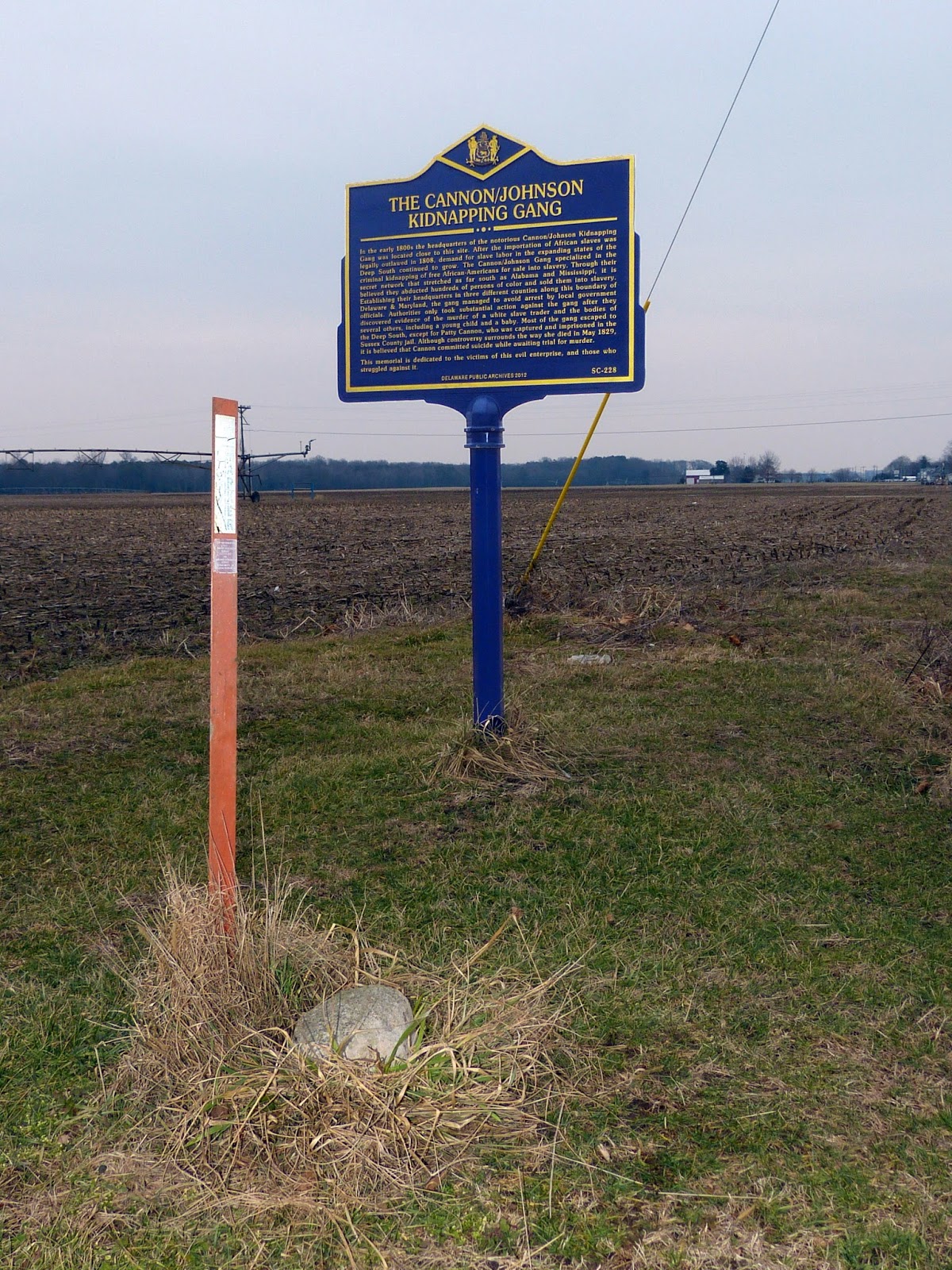 ...and across the street (Reliance Road) from the house that's not Patty Cannon's house. 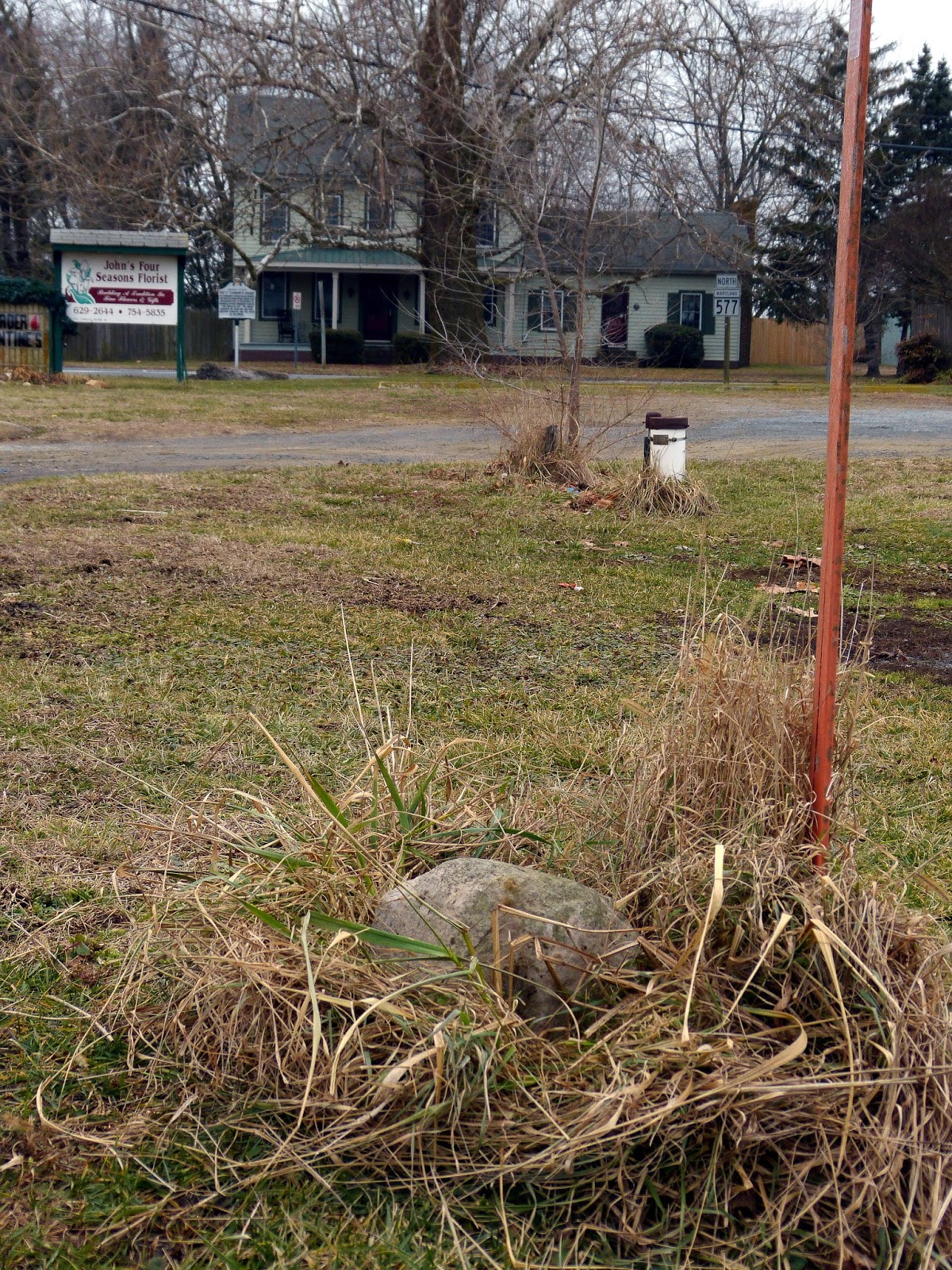 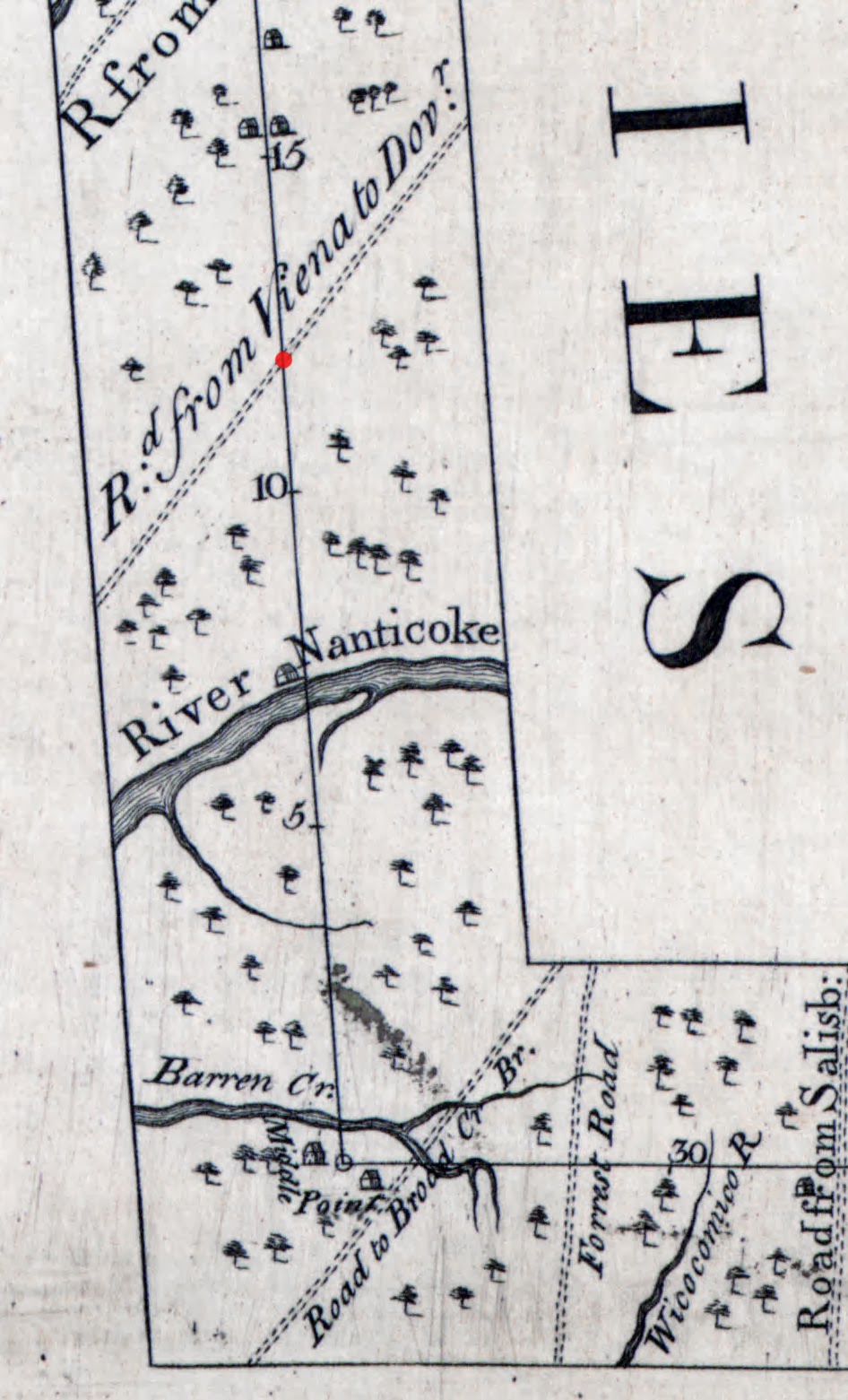 The stone is not exactly where Mason and Dixon left it. It was buried under State Line Road when that road was paved in 1951 and was moved in 1976 to its current location in the front yard of John's Four Seasons Florist at 6102 Finchville Reliance Road.  The USGS Datasheet tells the story this way:


Described by National Geodetic Survey 1976 (CLN) The Old Maryland-Delaware boundary monument number 12 was found in the prone position about 3-feet below the surface of the State Line Road. It was placed there by the Delaware Highway Department, when the road was paved in 1951. It was dug up at this date and reset 134 meters to the North and out of the Roadway. The monument has been broken halfway in two sometime in the past. and set in a large concrete base.