She was a Confederate Heroine, He was a Union Officer;

Together They Found a Separate Peace.


When the Civil War broke out in 1861, Antonia Ford was the very attractive, well-educated, 23-year-old daughter of wealthy merchant and ardent secessionist, Edward Rudolph Ford. Fairfax was soon overrun by Union forces. In June, John Q. Marr became the first Confederate officer killed in the war in the Battle of Fairfax Courthouse, a cavalry skirmish that took place not far from the Fords' house on Main Street.


Eppa Hunton described Antonia as a "stout Rebel" who "was so much admired by the Yankee officers and had so much influence over at least one of them, that she obtained their military secrets -- learned their plans and when they meant to attack Beauregard at Manassas. She made her way through the lines and met General J. E. B. Stuart with his gallant cavalry, and disclosed to that valiant soldier the Yankee plans."  In October of 1861, Stuart gave Antonia this "Commission," jocularly appointing her an Honorary Aide-de-Camp. 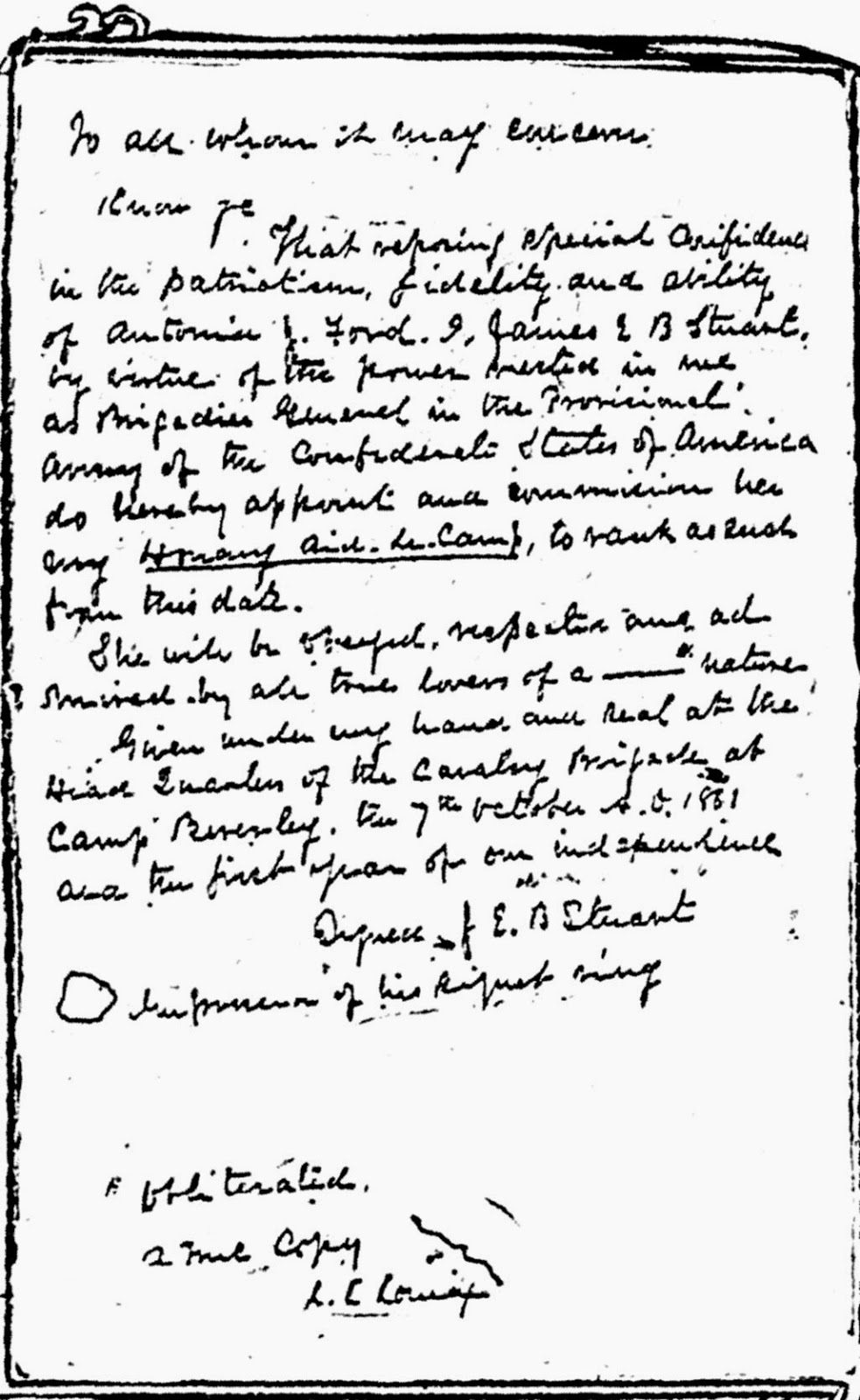 TO WHOM IT MAY CONCERN:

That reposing Special Confidence in the Patriotism, fidelity and ability of Miss Antonia Ford, I, James E.B. Stuart, by virtue of the power vested in me, as Brigadier General in the Provisional Army of the Confederate States of America, do hereby appoint and commission her my Honorary aide-de-camp, to rank as such from this date.


She will be obeyed, respected and admired by all lovers of a noble nature.

Given under my hand and seal at the headquarters, Cavalry Brigade, at Camp Beverly, this seventh day of October, A.D., 1861, and the first year of our Independence.

"The rebel cavalry leader, Stuart, has appointed to a position on his staff, with the rank of Major, a young lady residing at Fairfax Court House, who has been of great service to him in giving information," etc. -- Daily Paper.

Twenty-four-year-old Union Brigadier General Stoughton may have become one of those Union officers who fell under the influence of Antonia. After attending a party at the Ford house, he was captured by John S. Mosby as he slept in a nearby house. Legend has it that Stoughton asked as he was rudely awakened, "Do you know who I am?" Mosby replied, "Do you know Mosby, General?" "Yes!" exclaimed Stoughton, "Have you got the rascal?" "No, but he's got you!" came the reply. This was the first of Mosby's daring exploits. The New York Times (March 11, 1863) reported that when Lincoln heard Stoughton had been captured along with 32 men and 58 horses, he quipped, "I can make a much better brigadier in five minutes, but the horses cost $125 apiece."


This was the home of Antonia Ford, imprisoned as a spy following Ranger Mosby's night capture of the local Union commander, Brig. Gen. Edwin H. Stoughton, March 9, 1863. A search of the house had revealed an honorary aide-de-camp commission to Antonia from Gen. Jeb Stuart.


Rumors spread that Antonia had had a hand in Stoughton's capture. Lafayette Baker sent a female agent, Frankie Abel, to visit Antonia. Posing as a fellow rebel, Ms. Abel borrowed some of Antonia's clothes and slept in her bed. Antonia showed her the "Commission" from Stuart that she kept under her mattress. Baker immediately had Antonia arrested and held in the Old Capital Prison. When no credible evidence of espionage could be produced, Antonia was released on a promise to take the Oath of Allegiance. She was later re-arrested for failing to take the oath. This time she was escorted to prison by 41-year-old Joseph C. Willard, a Vermont Major on Irwin McDowell's Staff.


Joseph, along with his brother Henry, were owners of the Willard Hotel in Washington. Joseph Willard had himself transferred to Washington where he worked assiduously to have Antonia freed.  Willard personally administered the Oath of Allegiance on her second release. General Heintzelman's order read:

Major Willard, ADC, will administer in accordance with instructions from the Secretary of War the oath of allegiance to Miss Antonia Ford who will afterwards a proper time be transferred to her home at Fairfax Courthouse, receiving a written authority to remain at that place with her family.
By Command of Major General Heintzelman (Signed by J. H. Taylor, Chief of Staff, AAG)

The result was this pass, signed by Joseph Willard, allowing Antonia to return to her home. 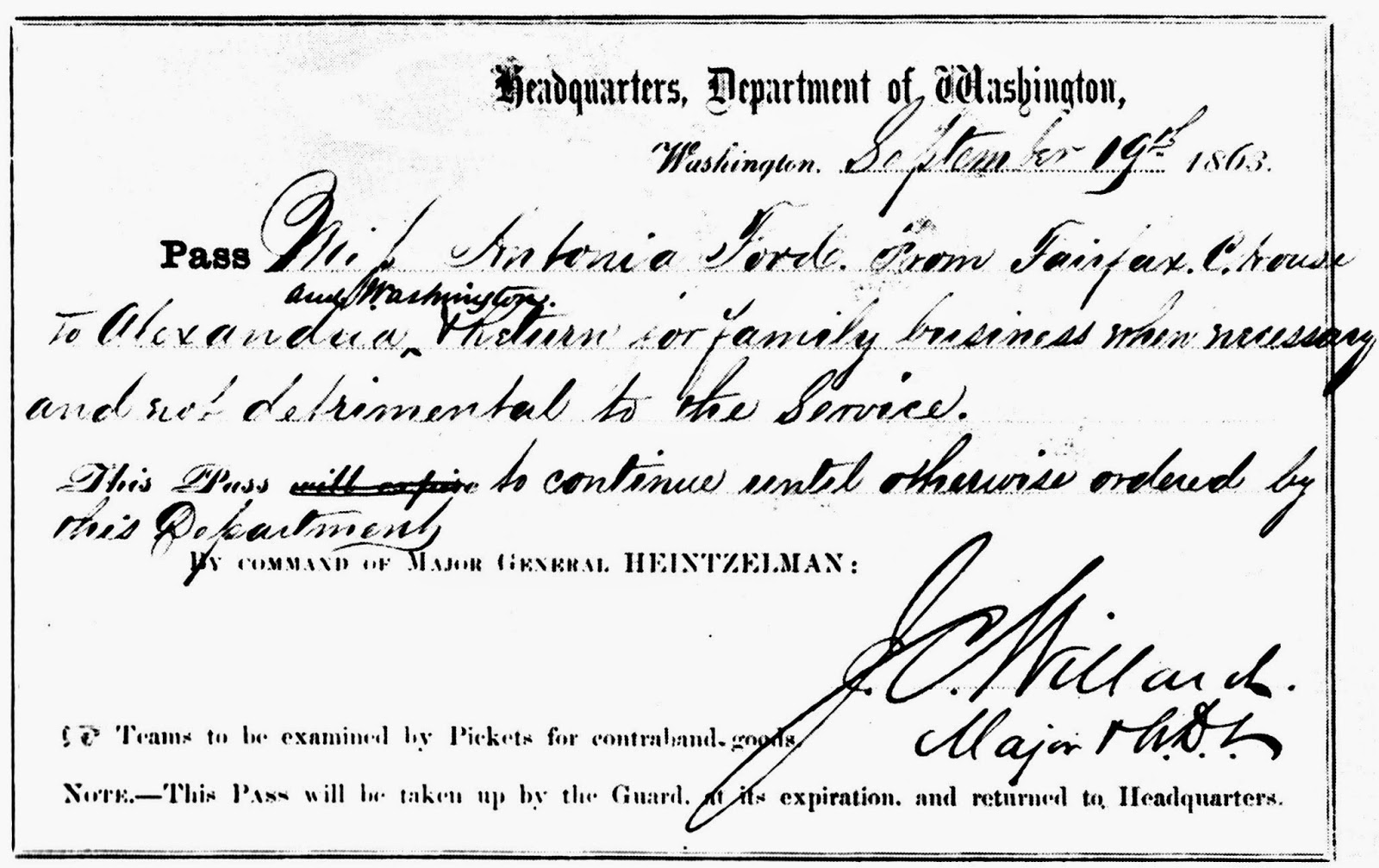 Headquarters Department of Washington
Washington September 19th 1863
Pass: Miss Antonia Ford from Fairfax C. house to Alexandria, and Washington and return for family business when necessary and not detrimental to the Service.
This Pass will to continue until otherwise ordered by this Department.
By Command of Major General Heinzelman:
J. C. Willard, Major
Teams to be examined by Pickets for contraband goods
Note -- This Pass will be taken by the Guard. at its expiration, and returned to Headquarters.

Antonia was soon writing letters to him addressed "My Dear Major" discussing marriage and vowing to "Love you as long as I live." Joseph proposed a "secret marriage" which Antonia refused.


"You know I love you but I can never consent to a private marriage. My parents and relatives would be mortified and distressed to death; acquaintances would disown me; it would be illegal; and above all it would be wrong. I cannot claim to be a Christian (unfortunately) but I have a conscience, and am governed by it. I dislike to say 'no' to one so dear, but there is no alternative in this case. I will grant any request which is right and proper, and would make you the happiest man in the world if I could without compromising myself. ... I [will not] place a barrier between myself and all friends. It would be wrong for you as well as for me. Neither of us could be happy, for the curse of God would cast upon us." -- quoted in Winkler, No Sacrifice Too Great, 2010

Two impediments stood in the way of their marriage, his commission in the Union Army and his wife Caroline. Willard intended to divorce Caroline whom he had married in 1849 by charging her with lunacy, but she filed against him in February of 1864 on grounds of  adultery. She alleged that Joseph had relations with women "of damaged reputations" at the Willard Hotel. Her slave Cecilia testified that Joseph carried on an affair with a woman named Caroline Rosekrans in the Willards' own home. Joseph resigned his commission on March 1, 1864. The divorce was granted on March 2, 1864. Antonia Ford and Joseph Willard were married at the Metropolitan Hotel in Washington on the 10th of March. When asked by a friend how she could marry a Yankee, she replied, "I knew I could not revenge myself on the nation, but I was fully capable of tormenting one Yankee to death, so I took the Major."


Their first son, Joseph Edward Willard, was born May 1, 1865. J.  E. Willard became  a member of the Virginia House of Delegates, served as a captain in the Third Virginia Regiment under former Confederate general Fitz Hugh Lee in the Spanish American War, and was Ambassador to Spain. His daughter, Belle Wyatt Willard, married Kermit Roosevelt in 1914.

Their second son died in infancy in 1867 and Antonia died soon after giving birth to their third son Archie on February  9, 1871. Archie died on the 9th, Antonia died 6 days later.

The Willards are buried at Oak Hill Cemetery in Washington in a plot marked by a large monument. 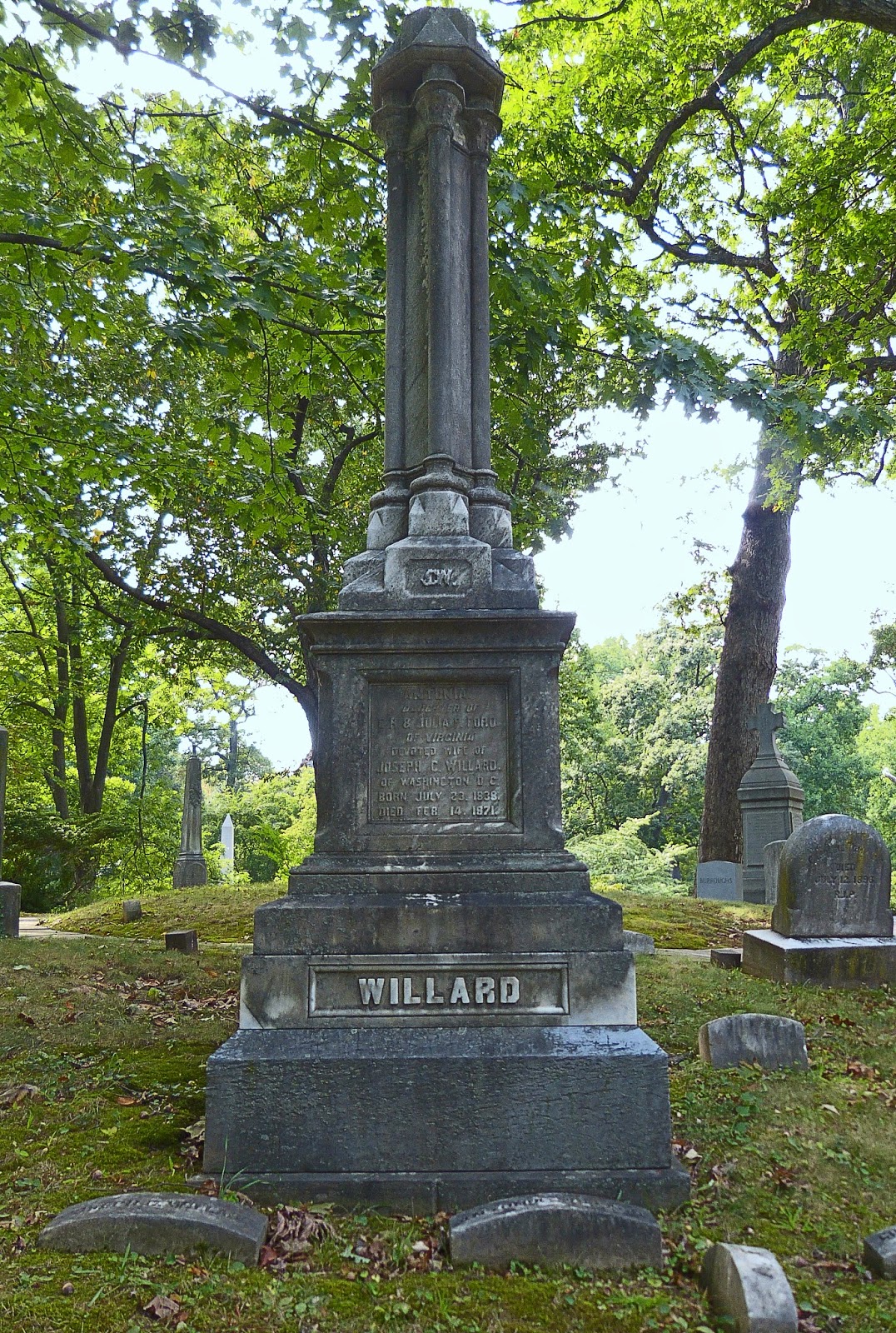 Antonia is commemorated on a plaque on the monument. 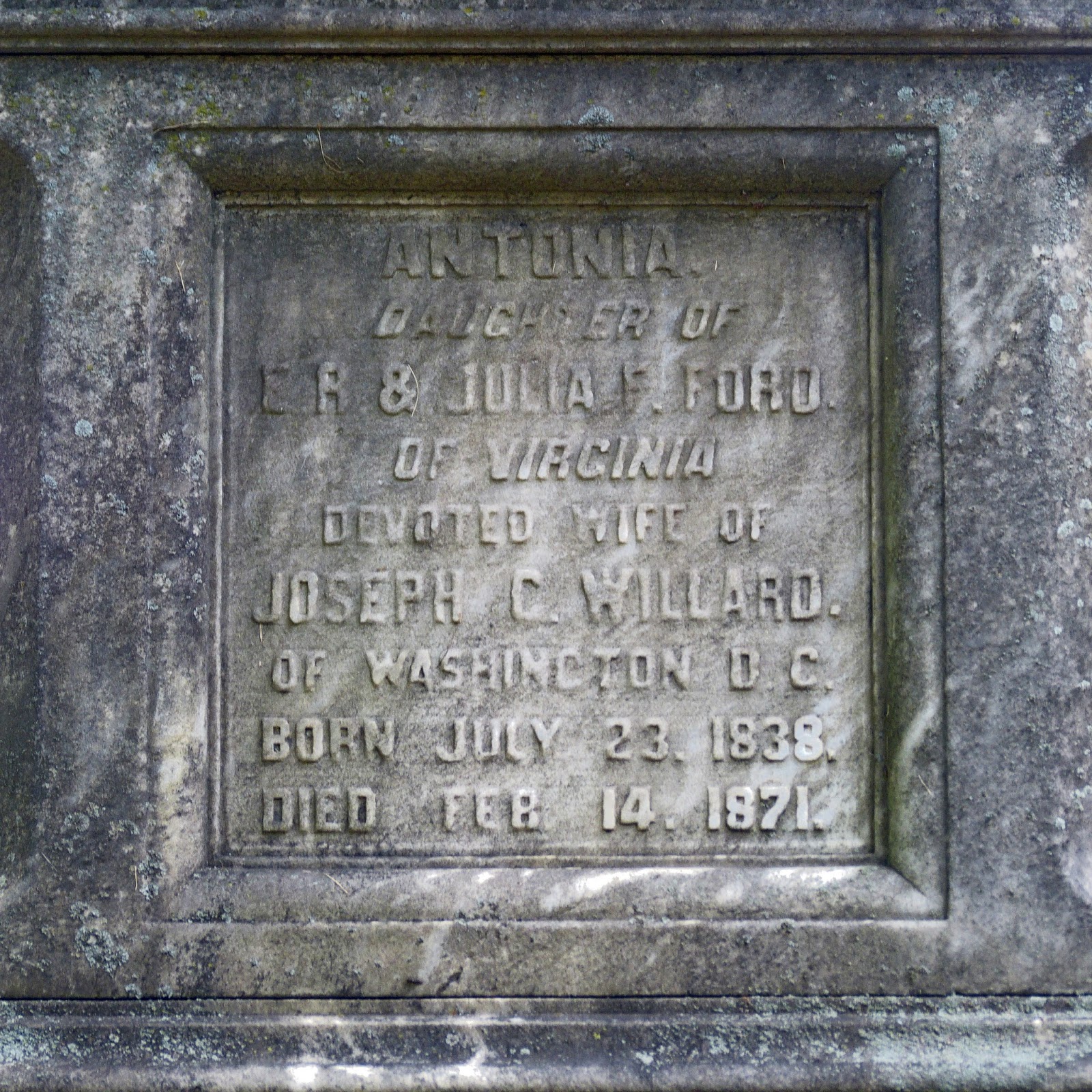 Her grave is marked by these smaller stones. 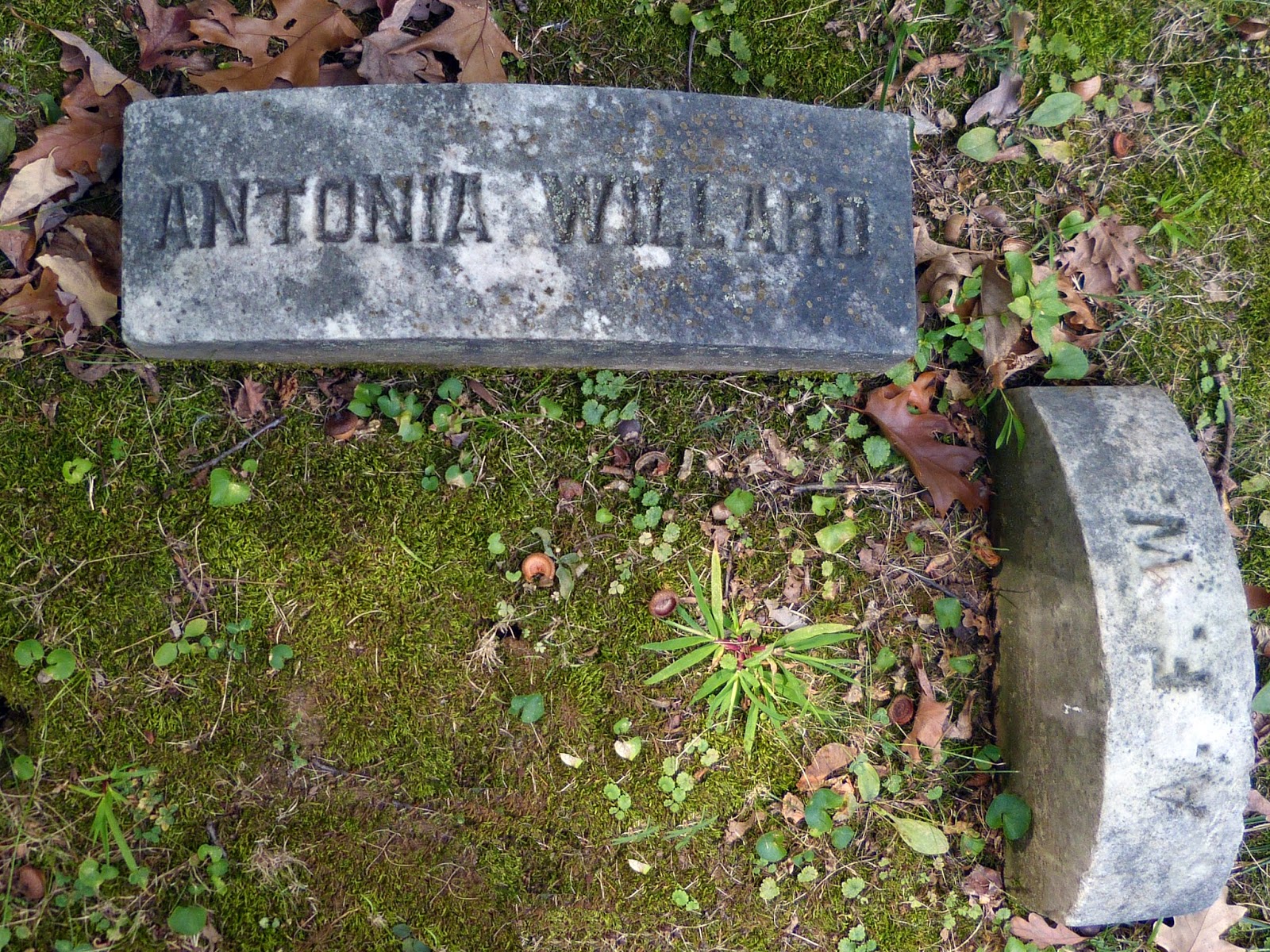 Another plaque on the monument commemorates Antonia's father who also died in 1871... 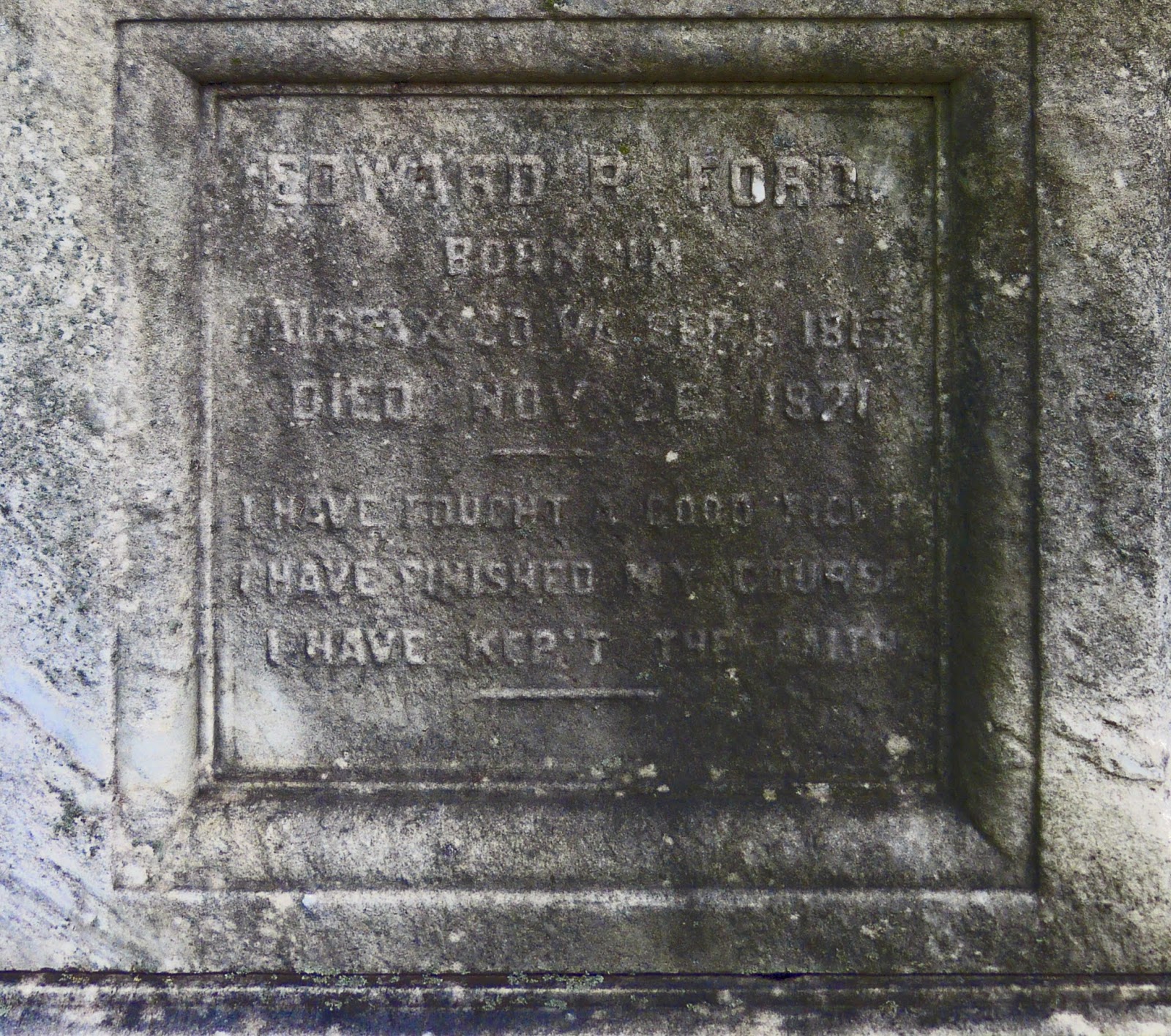 "I have fought a good fight, I have finished my course, I have kept the faith."

...and the Willards' two children who died in infancy. 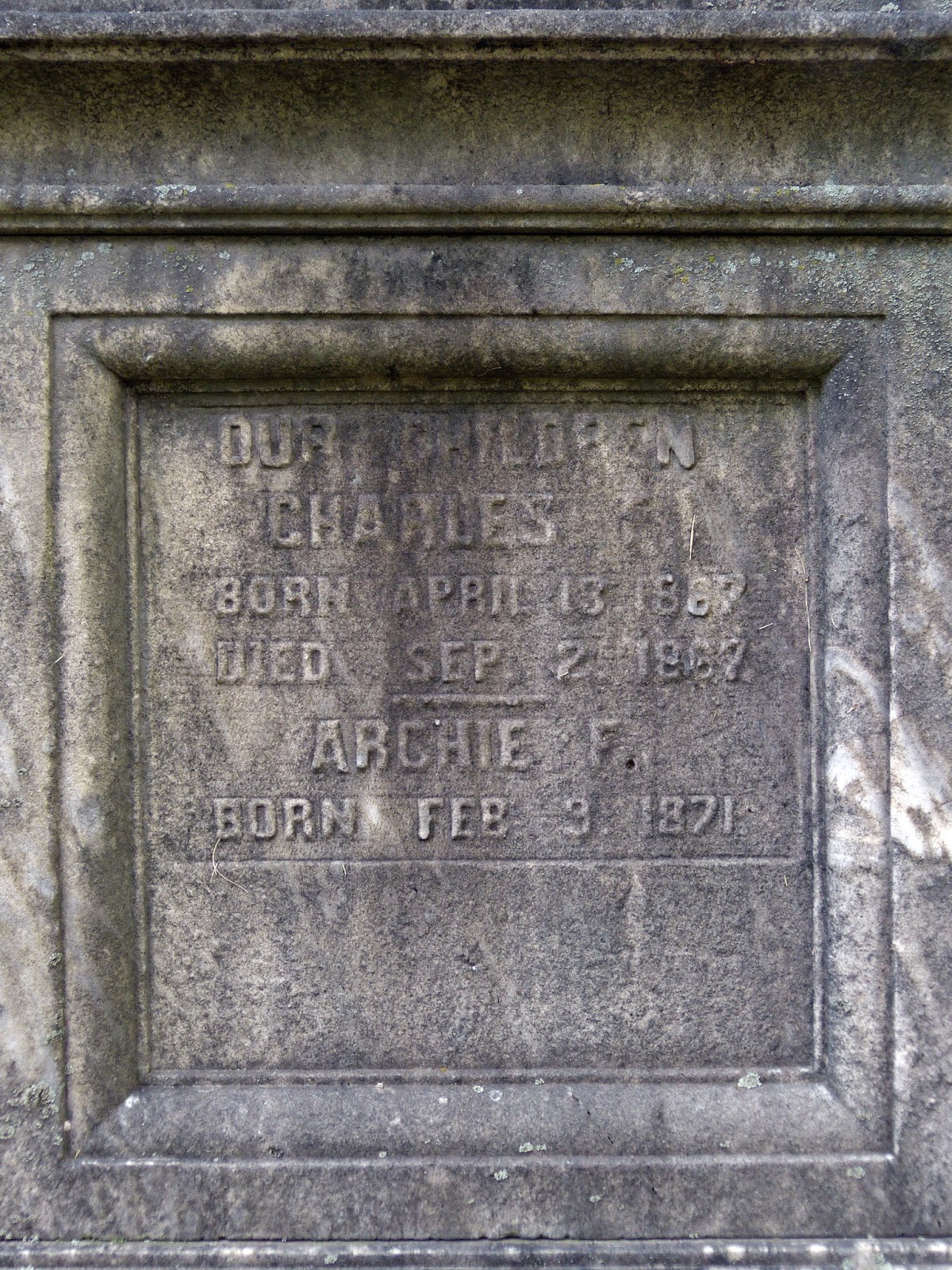 Joseph C. Willard bought out his brother's interest in the Hotel and lived until 1897. 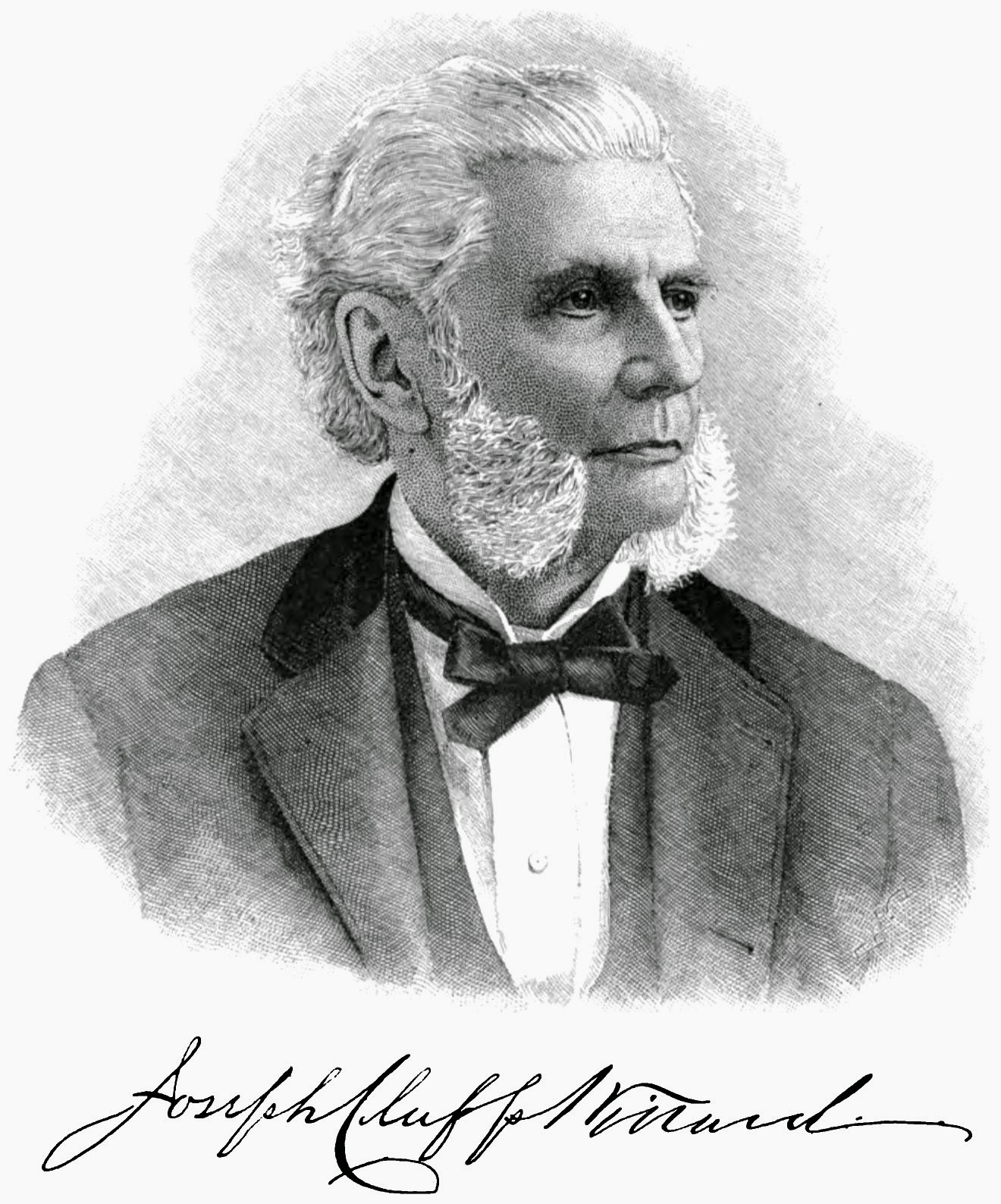 The forth plaque on the monument remembers Joseph C. Willard. 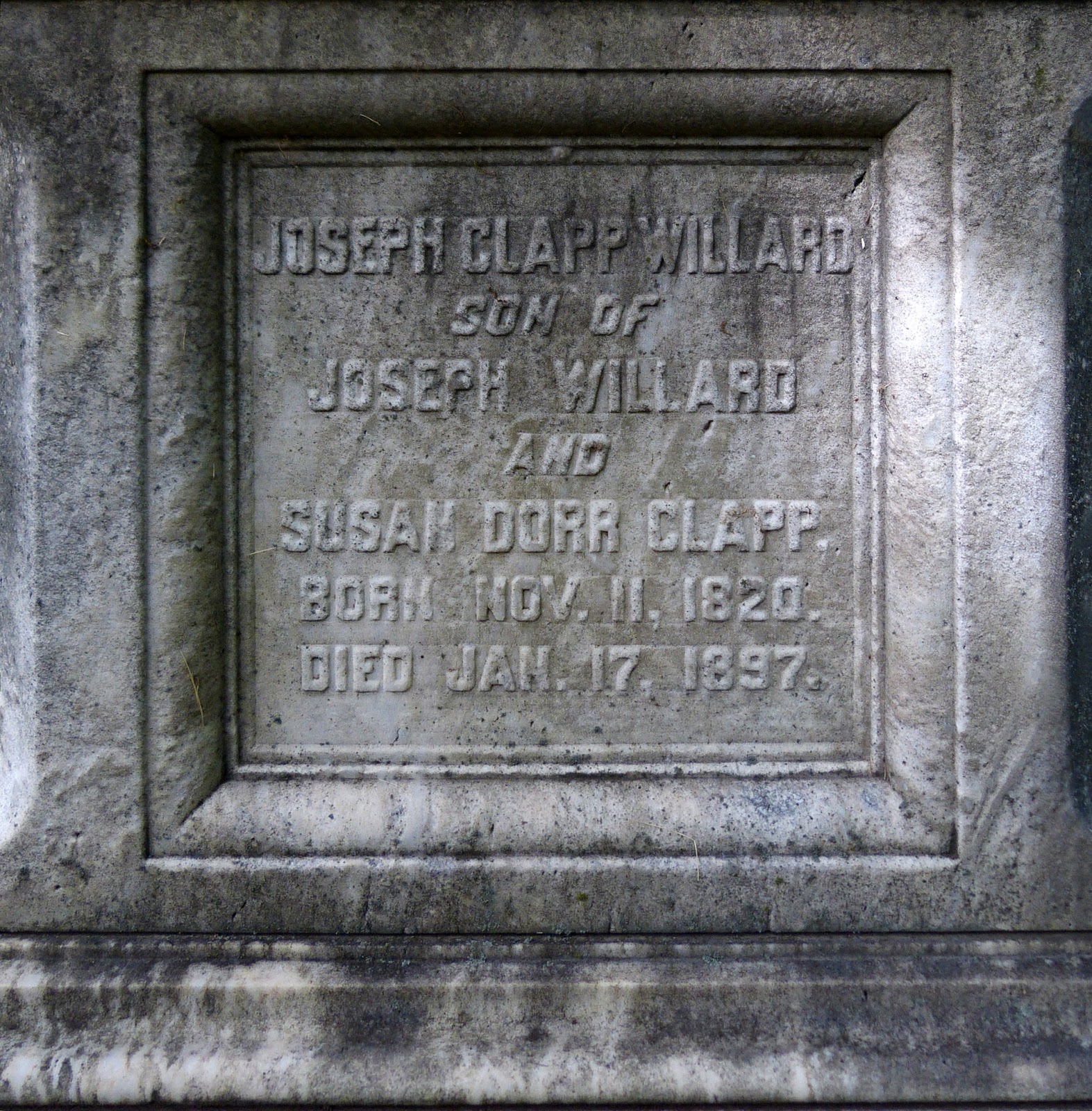 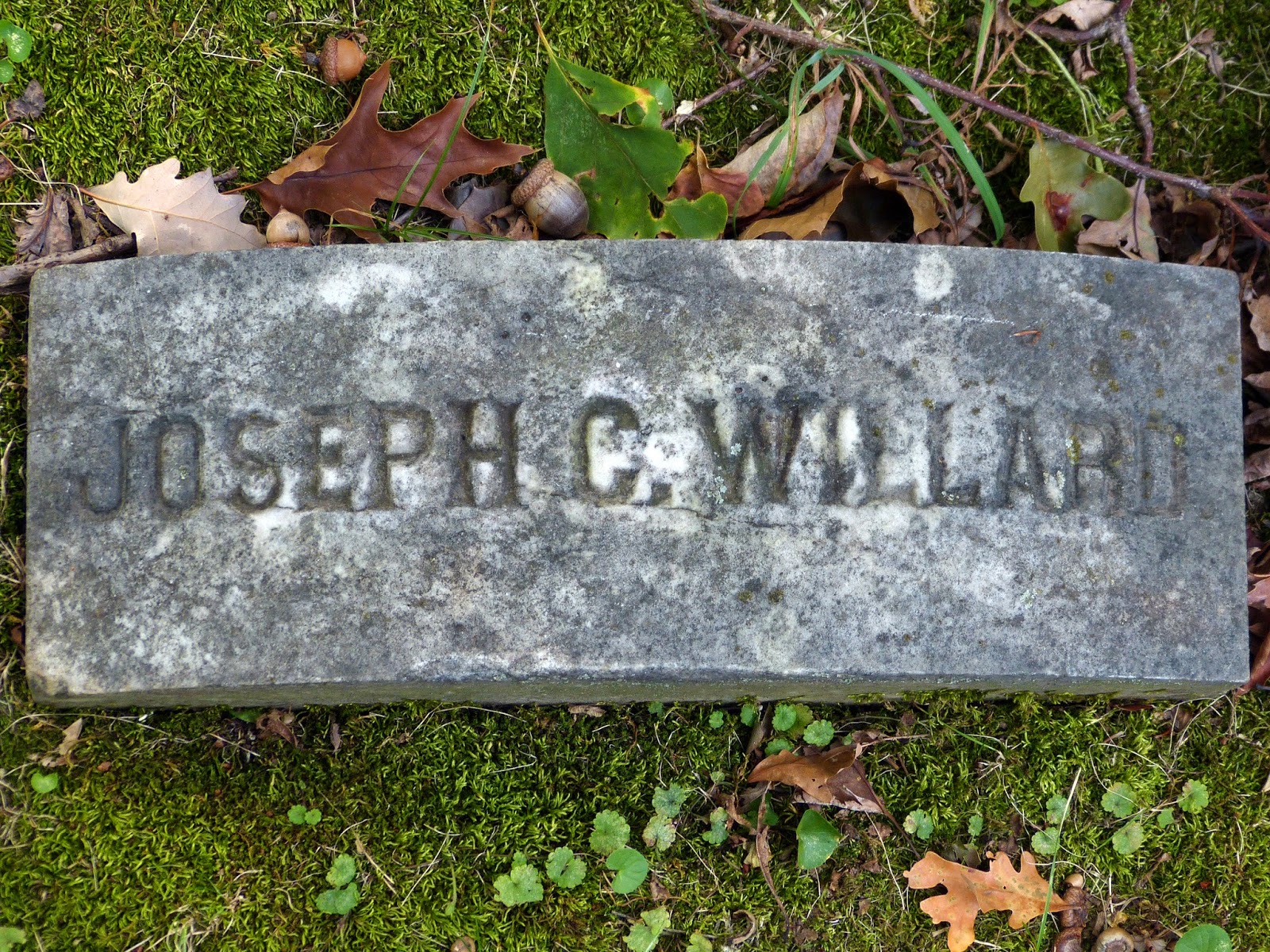