Barbara Fritchie with a Shotgun: Like fellow elderly Marylander Barbara Fritchie, Ishmael Day became famous for defending the flag from rebel invaders during the Civil War. But Day differs from Fritchie in several respects. Barbara Fritchie probably didn't do what she is famous for doing, and Day used a shotgun. Day was also a veteran of the War of 1812.

Along Sunshine Road just east of the tiny town of Fork in Baltimore County, Maryland, we find this 1934 road-side marker pointing to Ishmael Day's house and briefly telling his story. 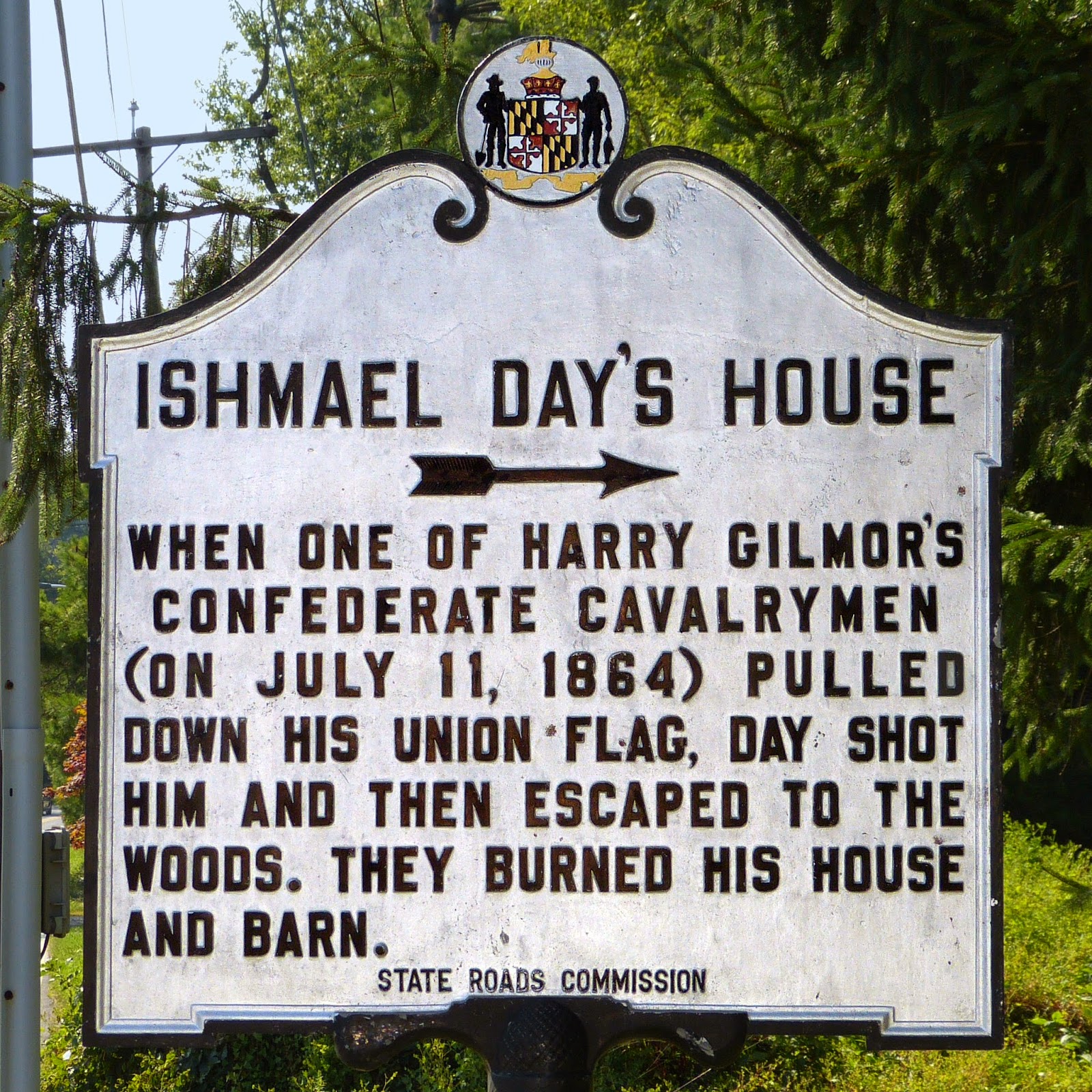 When one of Harry Gilmor’s Confederate Cavalrymen (on July 11, 1864) pulled down his Union Flag, Day shot him and then escaped to the woods. They burned his house and barn.

The last remnants of Day's house were destroyed in March of 1984. The arrow on the marker points to a distant cornfield: 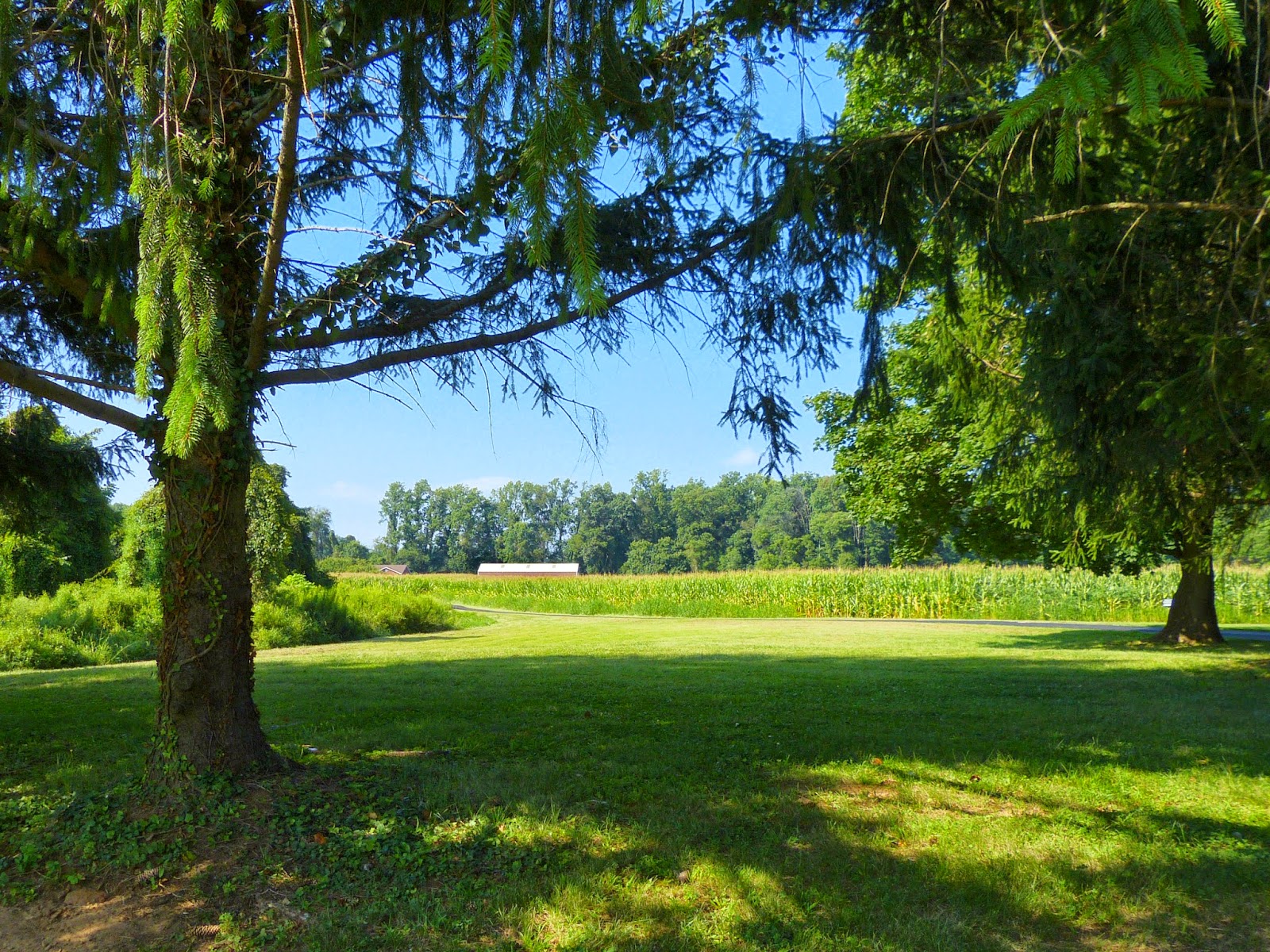 On July 10, 1864, Confederate General Jubal Early won the battle of Monocacy, the only major Confederate victory on northern soil. As the battle drew to a close, Marylanders General Bradley Johnson and Major Harry Gilmor took their Maryland Confederate cavalry on a raid through Baltimore and Harford Counties. Late on the 10th, Gilmor's men were falling asleep in their saddles. Gilmor himself fell asleep and missed the turn he had intended to make toward the Gunpowder River. He was awakened by a barking dog and decided to camp for the night at Joshua Price's Farm. Some of Gilmor's men camped that night at an old stagecoach stop at Old Joppa and Mountain Roads. 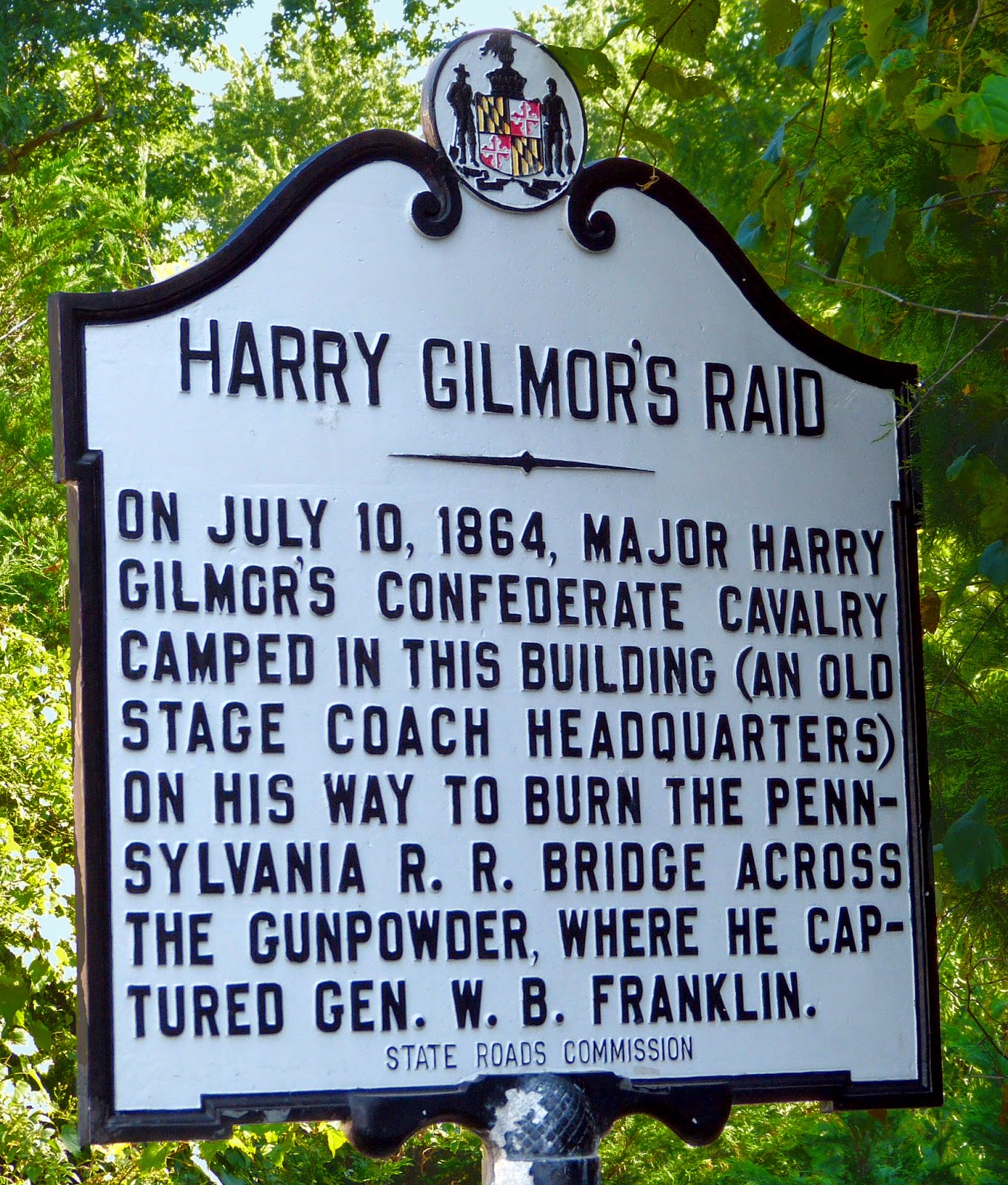 On July 10, 1864, Major Harry Gilmor’s Confederate cavalry camped in this building (an old stage coach headquarters) on his way to burn the Pennsylvania R. R. bridge across the Gunpowder, where he captured General W. B. Franklin.

On the morning of the 11th, as Early's army was approaching Washington while most of Gilmor's troops were headed for Magnolia Station, Gilmor lead a detachment to cut telegraph lines on the Harford turnpike. The advanced guard of this detachment found 73-year-old Ishmael Day in front of his house where his flag flew near the front gate. They ordered Day to lower his flag. Day refused and reportedly said, "Gentlemen, you may take my horses and my cattle, or burn my house to the ground, but I will shoot any man that touches that flag." Day retired into his house. While ordinance sergeant Eugene Fields fumbled with the flag's halliards, Day appeared in the second-story window with his duck gun and shot Sergeant Fields. This somewhat fanciful depiction of the event by Armand Welcker appeared in D. M. Kelly's 1883 book, Deeds of Daring by both Blue and Gray. 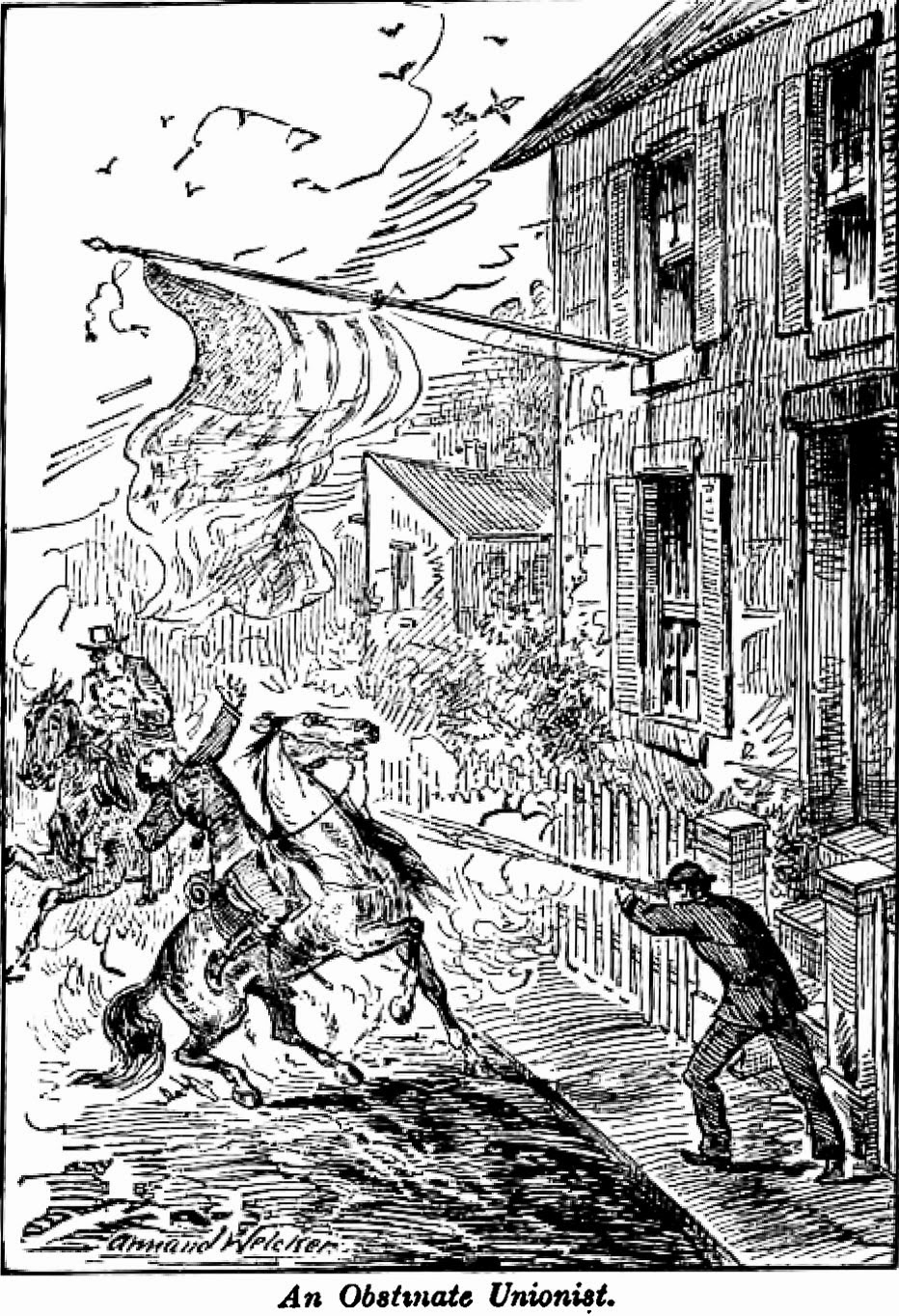 When Gilmor rode up, he found Fields dying but still conscious. Fields was taken to a nearby hotel to seek medical help but died later in a Baltimore hotel. Local legend has it that Fields was at first taken to Dampman's Hotel on the southwest corner of Harford Road and Sunshine Road in Fork. Today the old frame hotel building houses the Fork Post Office, a Veterinary Clinic and a Hair Salon.

Day escaped into his orchard and hid under a cider-press while Gilmor's men burned his house and barn. His wife, Ann, is said to have been present when the house was destroyed.

Day's exploit became nationally known almost immediately. On July 13th, the Baltimore American ran a story headlined "Ishmael Day, the Old Loyalist who Shot a Rebel" which was reprinted in the New York Times on July 17th. A few days later, the Maryland Constitutional Convention meeting at Annapolis — which would later in 1864 abolish slavery in Maryland — passed a resolution in praise of Ishmael Day:

Ordered, That the thanks of this Convention (representing as it does the people of Maryland) are hereby tendered to the old citizen and patriot of Baltimore county, Ishmael Day, for the heroic and gallant act in shooting down the traitor who dared to pull down the Country's Flag, which he had raised as an evidence of his loyalty and patriotism, which act of daring heroism meets the approbation of the heart and conscience every loyal citizen of Maryland.

Day had freed his own slave Eliza in 1846,  writing in the manumission document that he was doing so because he was living "under a Republican Government & believing as I most sincerely do that all the Human Race without respect to sex or Coulour should & ought to be free."

In August 1864, General William H. Hayward published Camp Songs for Soldiers and Poems of Leisure Moments, the first poem in which is "The Patriot Ishmael Day;" and in February of 1865, Harper's Magazine carried a poem by Elizabeth Akers Allen entitled "The Ballad of Ishmael Day."

But the 1864 incident was not Ishmael Day's first fight against hostile invaders of Maryland. Fifty years earlier, Day had fought against Wellington's Invincibles at the Battle of North Point. On Defenders' Day 1864, a month after shooting Sergeant Fields, Ishmael Day attended a commemoration of the September 1814 battle. He delivered the following toast at the Smedley Hotel in Towsontown.


"To the President of the United States — A true patriot and friend to all the human race, he has but one fault, he shows too much mercy to the Rebels."

Ishmael Day served twice during the War of 1812. He had been a private in Captain W. Hitchcock's company of Maryland Militia at the beginning of the war, serving between August of 1812 and January of 1813. Later, during the Battle of North Point, he was a Lieutenant in Captain Henry Fowler's company of Maryland Militia (Major Beale Randall's 2nd Maryland Rifle Battalion) from August 26, 1814, to October 13, 1814.

Ishmael Day later became Inspector of Customs in Baltimore and died in 1873. He was buried in the Cemetery at Fork Methodist Church. 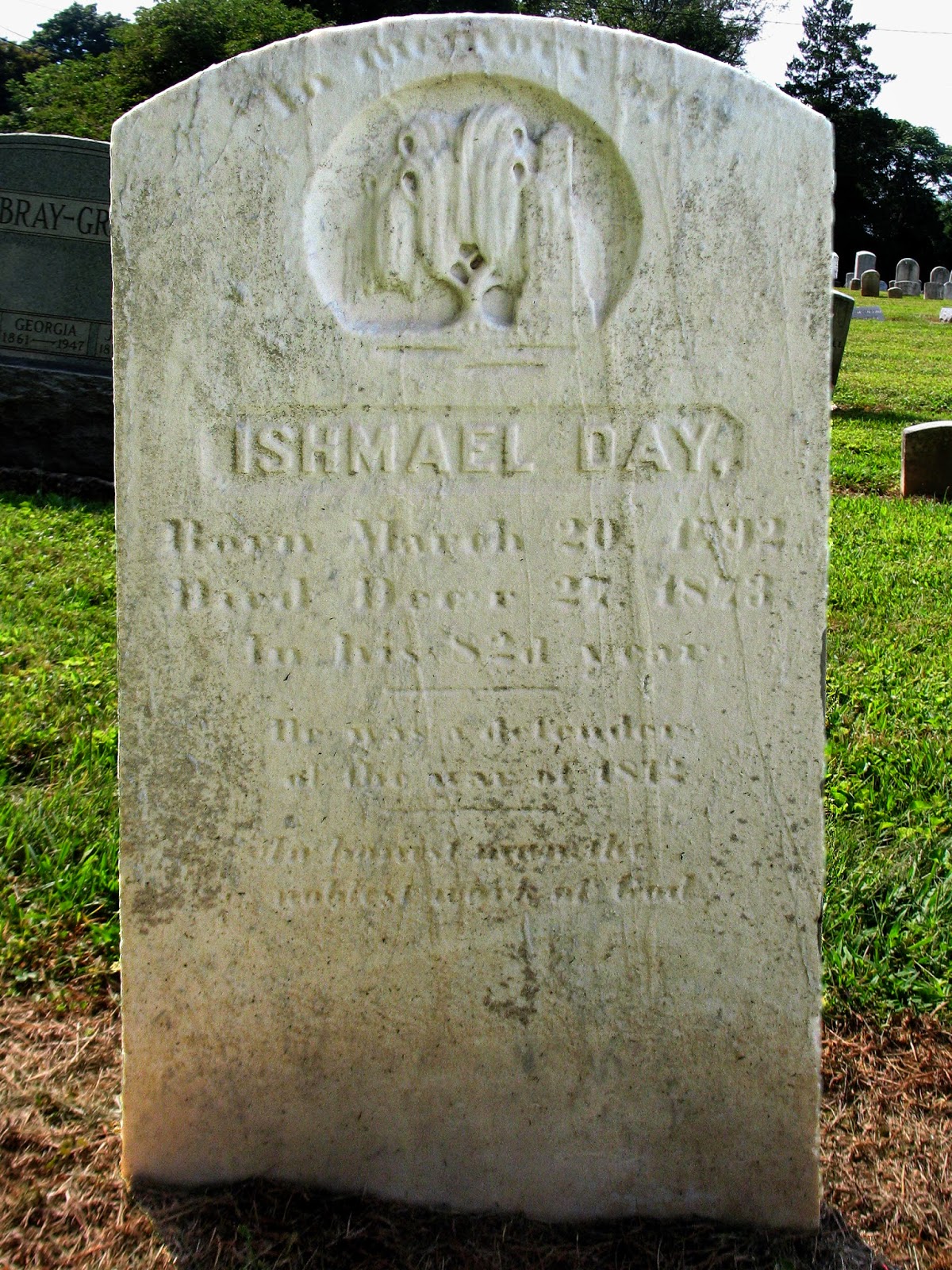