The Confederate Monument in Rockville 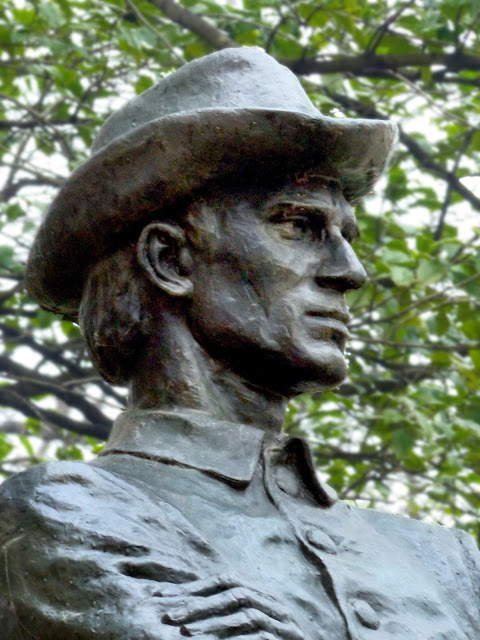 The Confederate Monument in Rockville, the county seat of Montgomery County, Maryland, was erected on June 3, 1913 (Confederate Memorial Day (Jefferson Davis' Birthday)), in a small park in the middle of Montgomery Avenue. 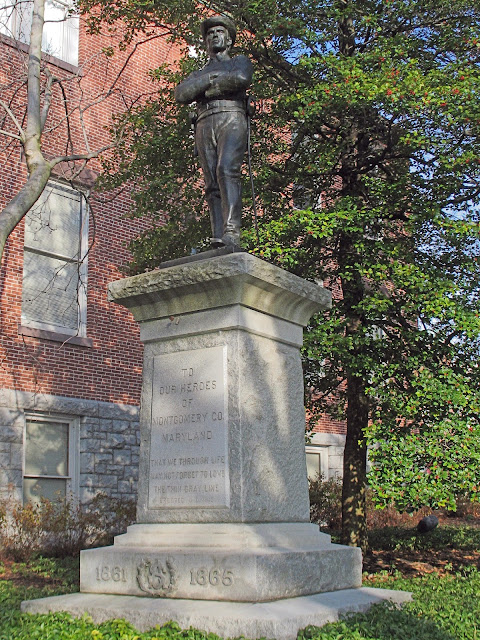 To
Our Heroes
of
Montgomery Co.
Maryland
That We Through Life
May Not Forget to Love
The Thin Gray Line
Erected A.D. 1913
1861 CSA 1865 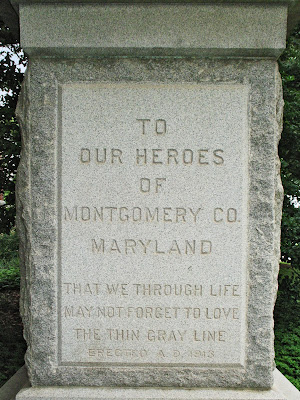 This 1915 map shows the little triangular park in which the monument was originally erected. The current location of the monument along the side of the Red Brick Courthouse is marked here by a red number 20. 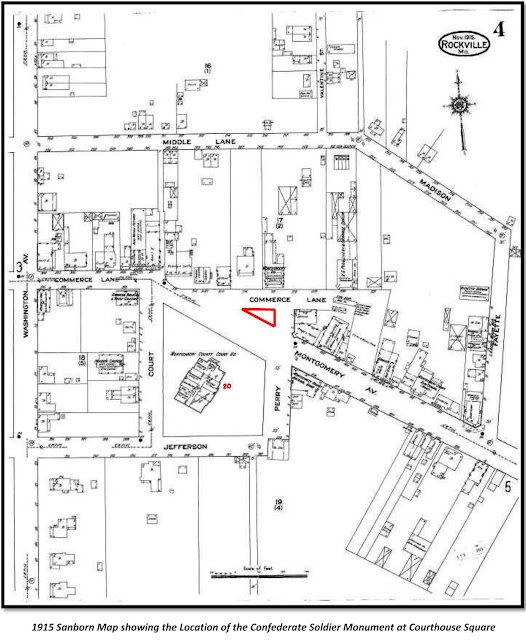 "In 1971, the City of Rockville was in the midst of a major urban renewal project. The downtown area was redesigned, East Montgomery Avenue was closed, and traffic was rerouted. It was necessary to remove Courthouse Square and the Confederate soldier monument. According to Planning Department records, the urban design consultant to the City suggested that the monument be moved to the east lawn of the Courthouse to make room for the construction of the redesigned Courthouse Square. After much public discussion, and controversy, the Mayor and Council, acting as the Local Public Agency for Urban Renewal, held a public hearing on the disposition of the statue. The County Executive consented to have the monument relocated to its current location on the east lawn of the Red Brick Courthouse." -- Rockville Historic District Commission 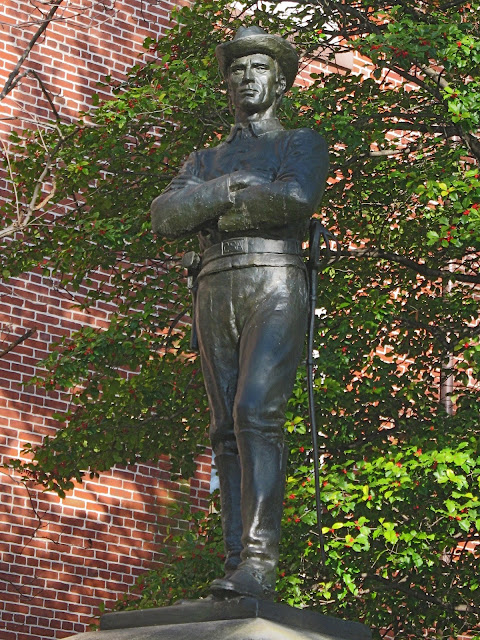 The six-foot tall statue on its eight-foot pedestal is the product of the Falvey Granite company in Washington, DC, makers of cemetery monuments.  As Susan Soderberg points out, the soldier statue is a common type of Civil War monument. Often the statue is a generic symbolic person. The subject of this statue appears to be a real individual.


"Although the stance of the soldier is similar to the stance of catalogue-ordered private-soldier statues which proliferated in the country at the time, the cavalry boots and sword and the individualized facial features make the Rockville statue unique. Because it is unique, someone had to have posed for the statue. Some have suggested that this model was Spencer C. Jones, since he had an obvious family connection with the Falveys*, but there is no evidence to substantiate this claim. " -- Susan Soderberg, The Confederate Monument and  Its Symbolism, The Montgomery County Story, August 1993.

* Spencer's daughter was married to a Falvey. 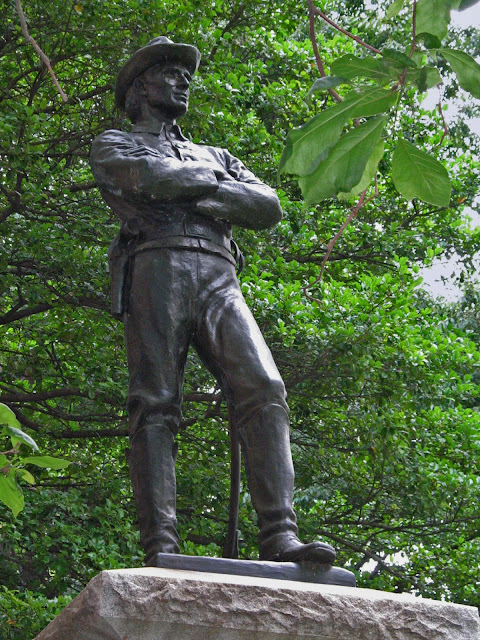 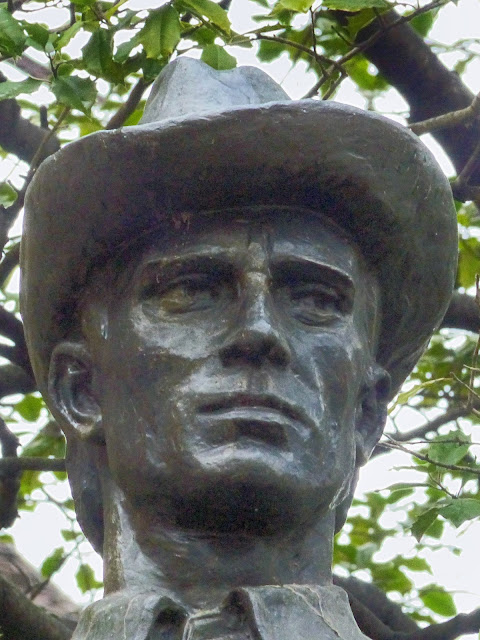 Always controversial, this statue is scheduled to be moved from its already obscure location to Whites Ferry on the north western edge of the county. At a County Council meeting in 2015, a group of interested parties met including Anthony Cohen - President, Menare Foundation and Button Farm; Jim Loewen - Historian and Sociologist; Linda Moran - Assistant to the City Manager City of Rockville; Nancy Pickard - Executive Director Peerless Rockville; Anita Powell - President of the Montgomery County NAACP and member of the Rockville Historic District Commission; Laurie-Anne Sayles - President of the African American Democratic Club of Montgomery County; and Susan Soderberg - Historian. Their deliberations as to whether to destroy, relocate and/or further interpret it, can be read here.

Currently, the monument is surrounded by a wooden box, ostensibly to protect it from vandalism. 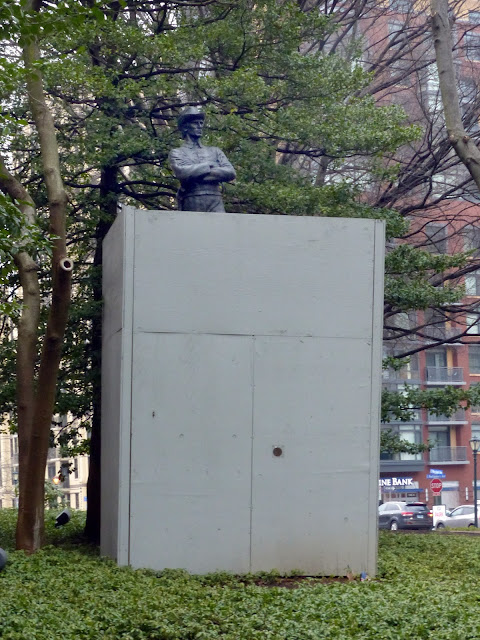 The confederate solder peeks out the top of the box. 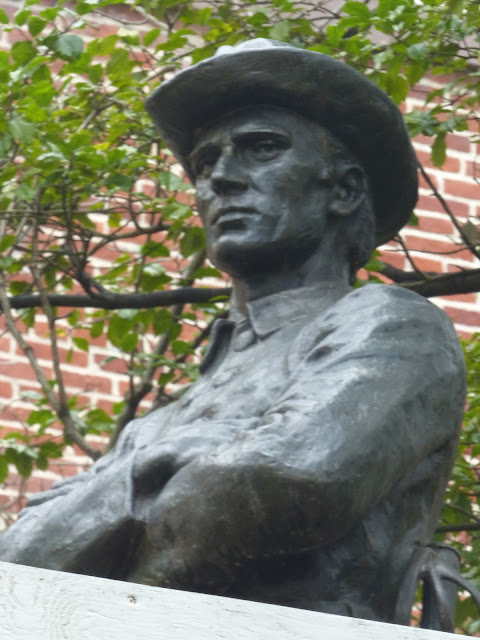 The inscription can be read through a peephole in the box. 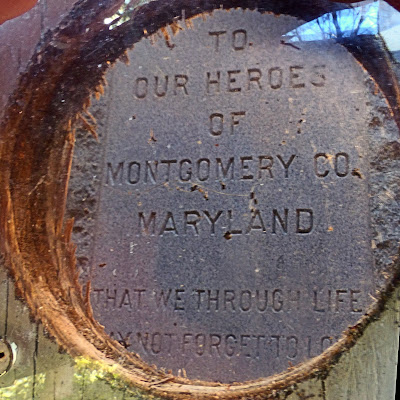 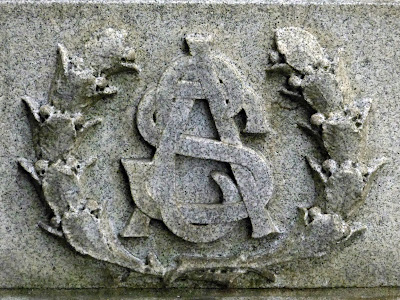