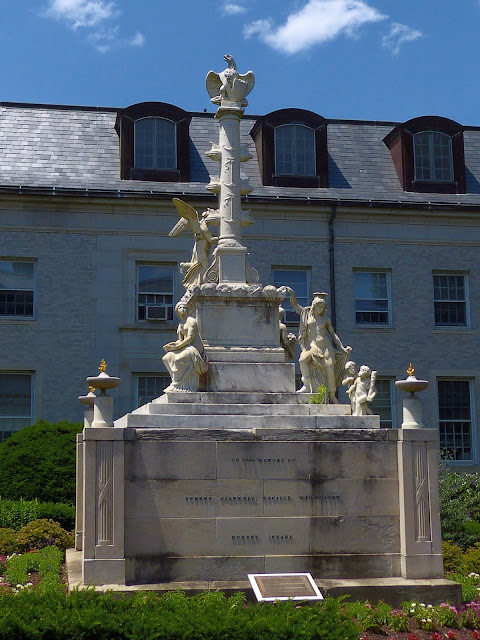 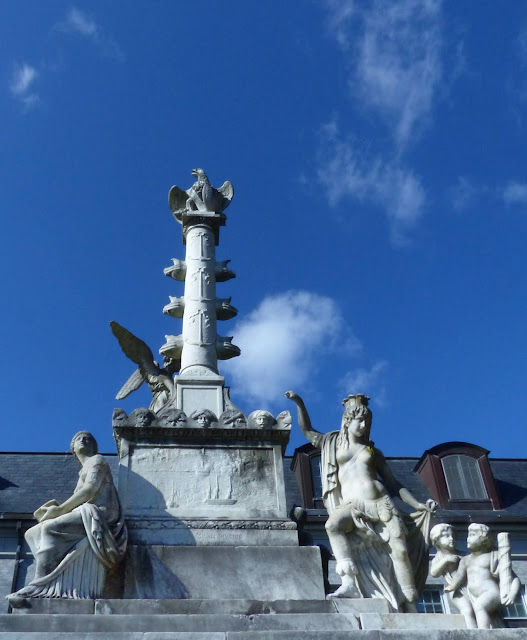 TheTripoli Monument at the U.S, Naval Academy in Annapolis is the oldest war memorial in the United States. A bronze plaque mounted at the base of the monument offers an explanation. 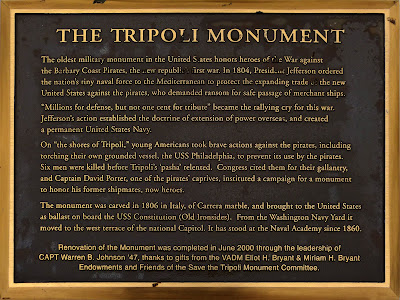 The oldest military monument in the United States honors heroes of the War against the Barbary Coast Pirates, the new republic's first war. In 1804, President Jefferson ordered the nation's tiny naval force to the Mediterranean to protect the expanding trade of the new United States against the pirates, who demanded ransom for safe passage of merchant ships. “Millions for defense, but not one cent for tribute” became the rallying cry for this war. Jefferson's action established the doctrine of extension of power overseas, and created a permanent United States Navy.

On “the shores of Tripoli,” young Americans took brave actions against the pirates, including torching their own grounded vessel, the USS Philadelphia, to prevent its use by the pirates. Six men were killed before Tripoli's ‘pasha’ relented. Congress cited them for their gallantry, and Captain David Porter, one of the pirates captives, instituted a campaign for a monument to honor his former shipmates, now heroes.

The monument was carved in 1806 in Italy, of Carrera marble, and brought to the United States as ballast on board the USS Constitution (Old Ironsides). From the Washington Navy Yard it moved to the west terrace of the national Capitol. It has stood at the Naval Academy since 1860.

Renovation of the Monument was completed in June 2000 through the leadership of Capt. Warren B. Johnson '47, thanks to gifts from the VADM Eliot H. Bryant & Miriam H. Bryant Endowments and Friends of the Save the Tripoli Monument Committee.

The claim that  “Millions for defense, but not one cent for tribute” was the rallying cry of the
First Barbary War is a little odd. Pinckney uttered those words during the XYZ affair that led to the quasi war with France. The U.S. had been paying tribute to the Barbary states since 1786.
But this monument tells its own story. 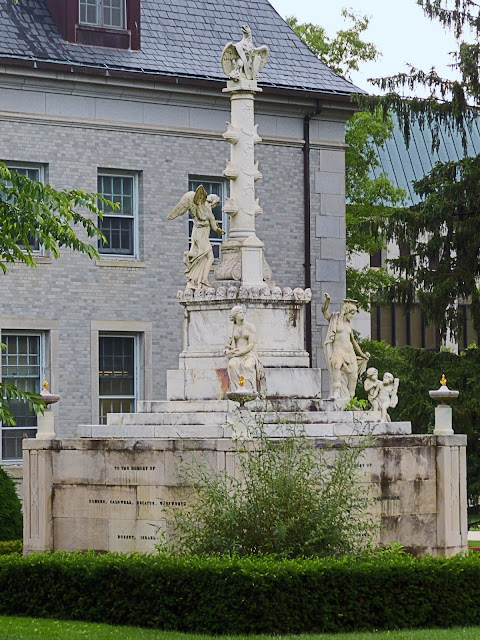 The base of the monument lists the 6 men who are memorialized here. 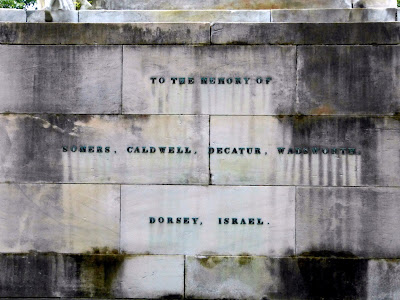 To  the memory of
Somers, Caldwell, Decatur, Wadsworth,
Dorsey, Isreal.
One of the four panels on the memorial lists them more fully.

Erected in the memory of Captain
Richard Somers, Lieutenants
James Caldwell, James Decatur,
Henry Wadsworth, Joseph Israel,
and John Dorsey who fell in the different
attacks that were made on the city of  Tripoli
in the Year of our Lord 1801
and in the 28th Year of the independence
of the United States.
Janet Headley tells succinctly what happened to these men.

Lt. James Decatur (Stephen's brother) was killed on August 3, 1804, as he boarded a Tripolitan vessel he had captured. Four days later, Lt. James Caldwell and Midshipman Thomas Dorsey perished when their gunboat was hit. In a final heroic act, Capt. Richard Somers loaded the Intrepid with powder, creating a fireboat that he planned to explode in the heart of the Tripolitan harbor. On September 3, the Intrepid exploded prematurely, killing Somers and acting lieutenants Henry Wadsworth and Joseph Israel. 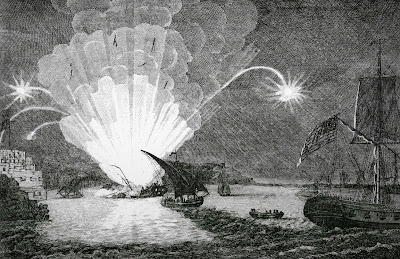 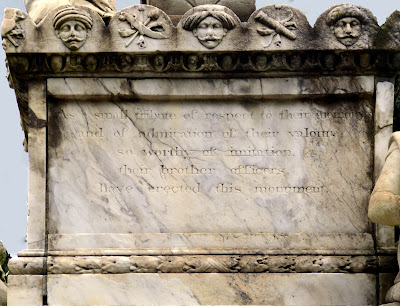 As a small tribute of respect to their memory
and of admiration of their valour
so worthy of imitation
their brother officers
Have erected this monument.
A third panel features a bas-relief of Tripoli harbor and names the sculptor as Giovanni Charles Micali. 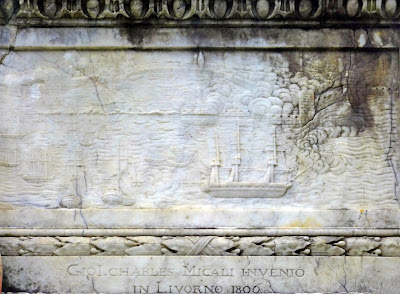 GioI. Charles Micali Invenio
In Livorno 1806
The architect Benjamin Henry Latrobe commented on this panel in 1814:

On each side of the block is a panel. That to the south represents, in basso relievo, a view of Tripoli from nature, with a frigate and gun-boats in the fore-ground, attacking the town. This, like all landscapes, and representations of air and water and smoke in sculpture, is a work of no effect or beauty; but will serve as a record of the appearance of Tripoli in the year 1804.

The fourth panel explicates the iconography of the monument. 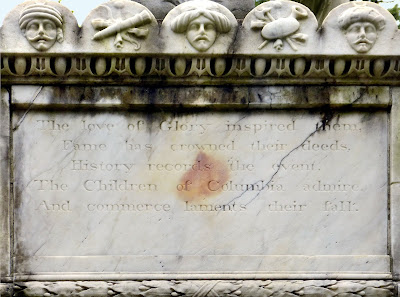 The love of Glory inspired them,
Fame has crowned their deeds,
History records the event.
The Children of Columbia admire
and Commerce laments their fall.

Each line of this inscription corresponds to statuary on the monument. 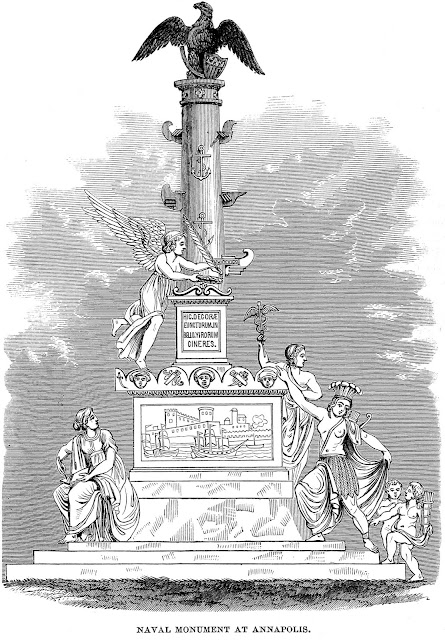 Benson Lossing from Pictorial Field Book of the War of 1812.

The base of the Monument has lamps on each corner. The flames  represent "Love of Glory" 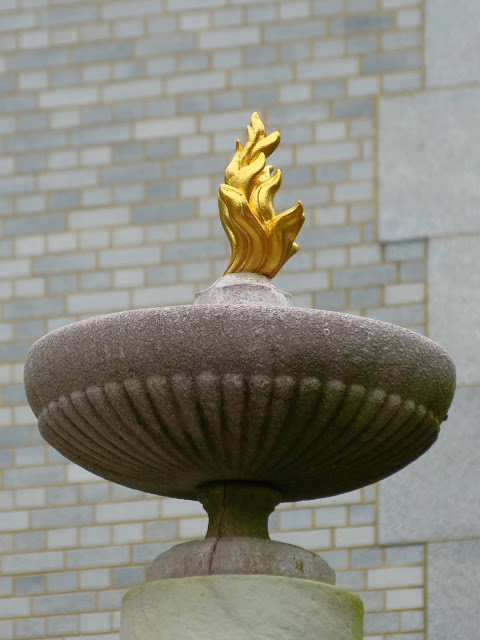 Love of Glory inspired them. 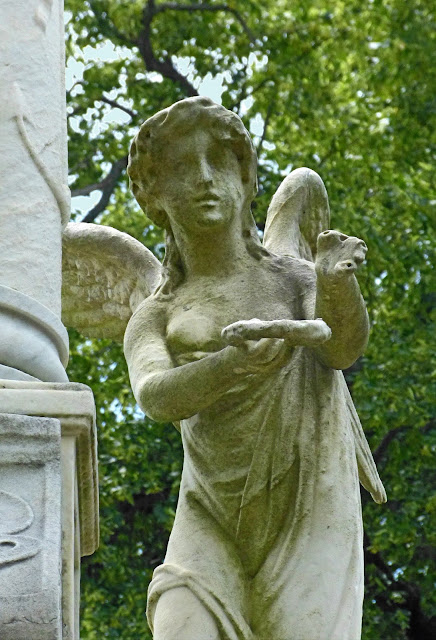 Fame has crowned their deeds.

Latrobe describes this statue as Victory, rather than Fame.

At the northwest corner the figure of the winged Victory is elevated to the summit of the square block that supports the column. In her right hand she holds a wreath of laurel over the sarcophagus; in her left a branch of palm, of bronze gilt. The figure is but indifferent, but the general effect is good. 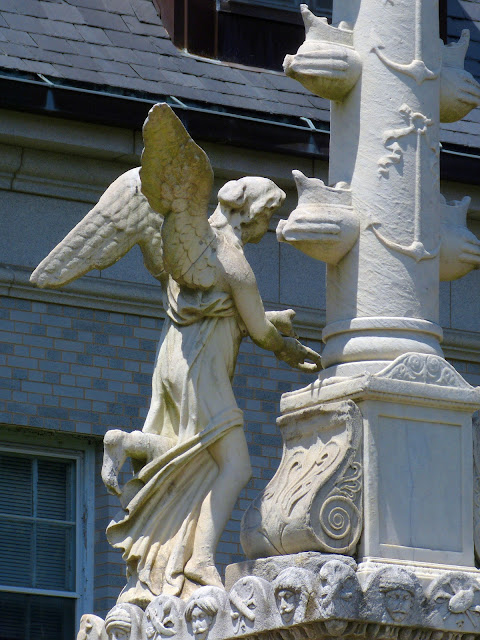 Lossing's shows “Fame in the attitude of alighting”. 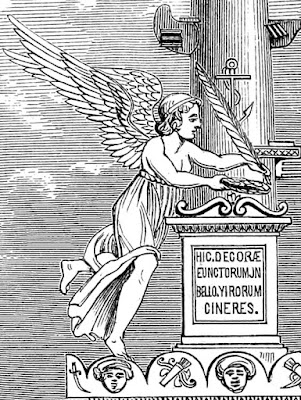 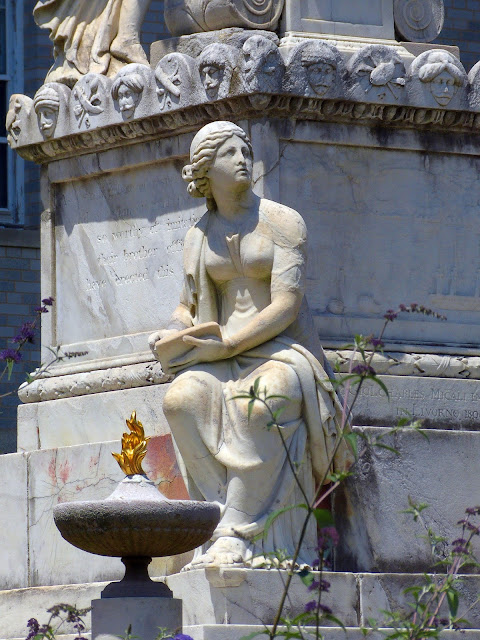 At the northeast angle sits History. She is represented by a tolerably good female figure fully clothed, holding a book in her left hand, and a pen of bronze gilt in her right. She looks upward to the column, and appears on the point of commencing to write. This figure is well placed, well imagined, and her attitude is very good: but the sculpture is faulty, especially about the neck. 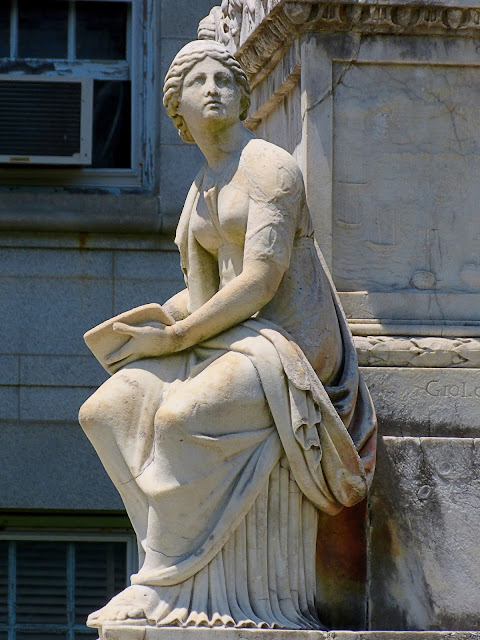 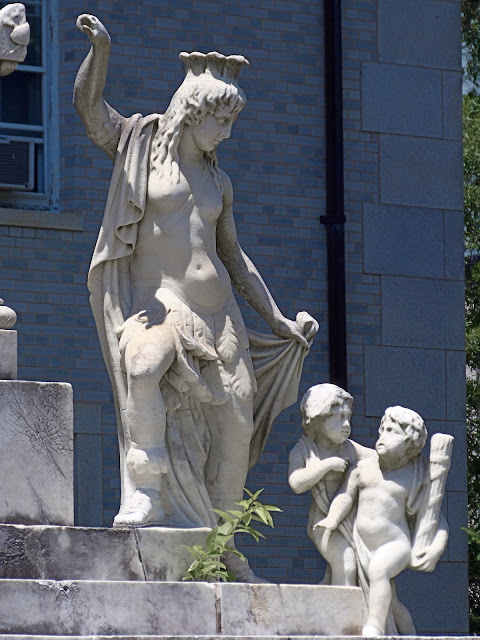 The Children of Columbia admire.
Latrobe really doesn't like the portrayal of Columbia as a nearly naked Native American woman.

At the southeast, a female figure, having on her head a diadem of feathers, a covering like the short petticoat attached to the Roman Lorica, also of ostrich feathers, round the waist, and Roman leggins and shoes, but otherwise naked, represents America. She leads up to the monument two children from the lower step, and points upwards to the inscription on the pedestal. This is a badly imagined and executed figure, and has nothing of the native American character or costume. 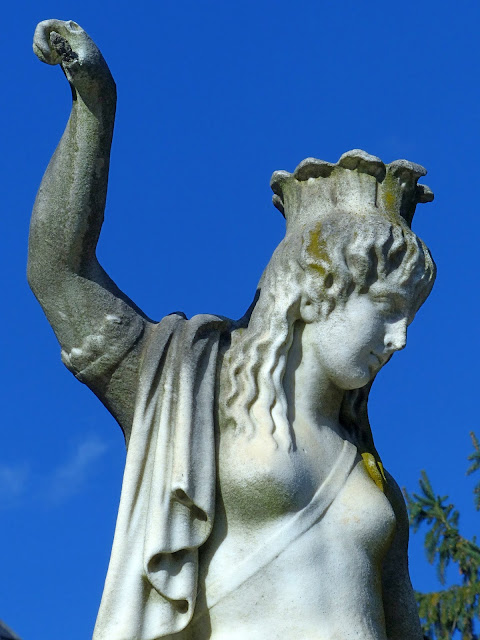 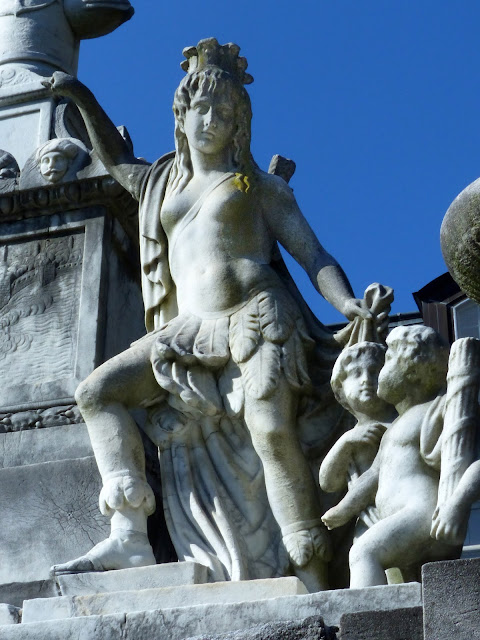 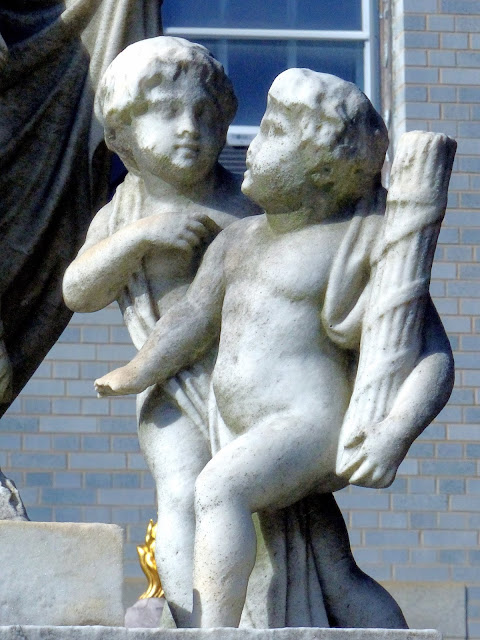 The fourth and final figure is Commerce. The first Tripolitan War was about the protection of commerce. 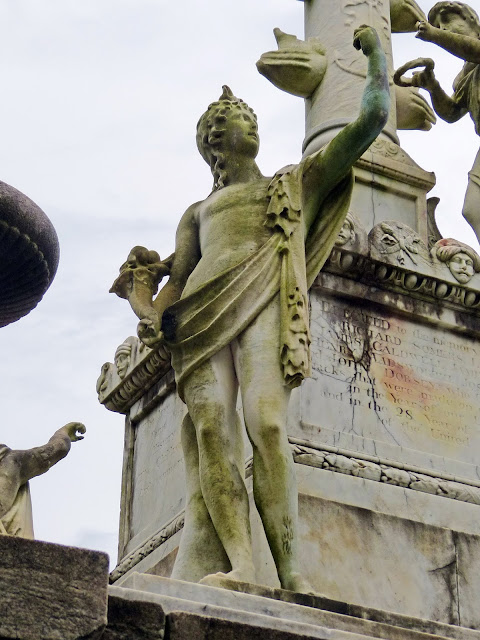 Commerce laments their fall.
Latrobe likes this statue so much that he suspects Micali of either theft or plagiarism.

At the northeast corner is a figure of Commerce standing. His right hand points to the column, with the caduceus in the left. This is by far the best figure of the whole, in drawing, attitude, and spirit, and must have been executed either by a superior artist, or from a model by a first rate sculptor.

Lossing illustrates Commerce with the caduceus. 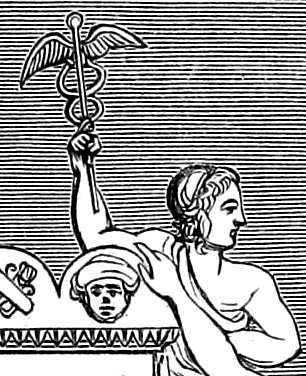 Like History's pen,  Commerce's caduceus disappeared in 1814 when British troops occupied the Navy Yard. His other attribute a cornucopia  was broken at that time. 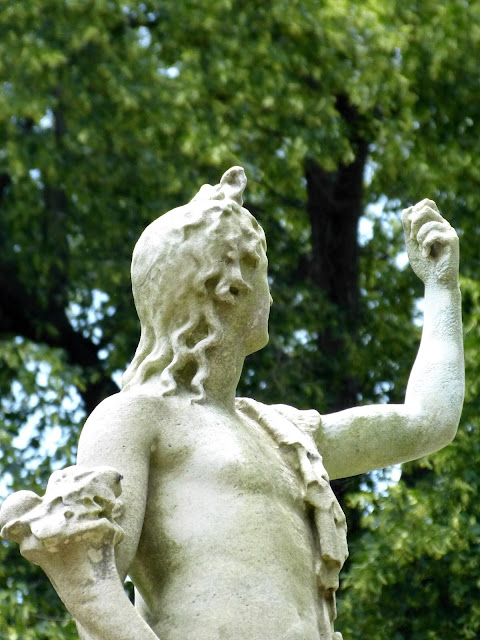 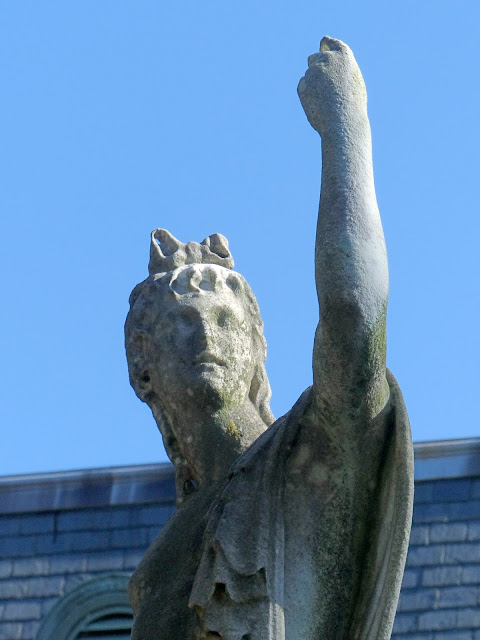 This box at the base of the column was apparently intended to hold the ashes of the dead officers. 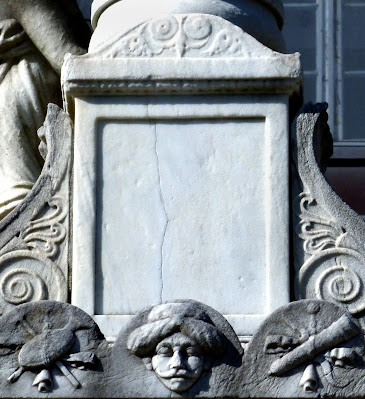 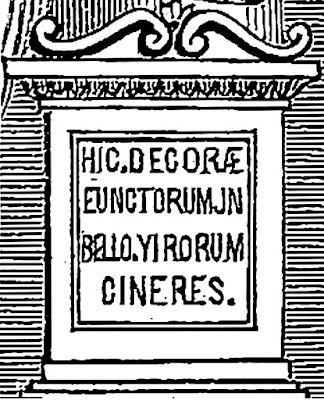 Hic decorae functorum in bello virorum cineres
Here are deposited the sacred ashes of men who fell in war.
No remains are actually interred in the monument and the inscription has disapeeared.
Commodore Porter, who claimed to have designed the monument, sums it up:

Suitable descriptive inscriptions in English, explanatory of its object, and by whom erected, were placed on it; and one, among others, purporting that the heroes, whose ashes were supposed to be deposited in it, had been inspired by the love of Glory, (represented by the lamps which surrounded the base;) and Fame, after crowning them, had presented to them the Palm. Commerce, bearing the Cornucopia, is represented lamenting the fall of its protectors. The bas-relief at the foot of the naval column, represents the battles fought before Tripoli, which America is pointing out and describing to her admiring children, and History is calmly seated at the base, looking back, recording the past events, with a golden pen.

The rostral column is the traditional classical form for a naval monument. Ships prows,
rostra, project from the column. 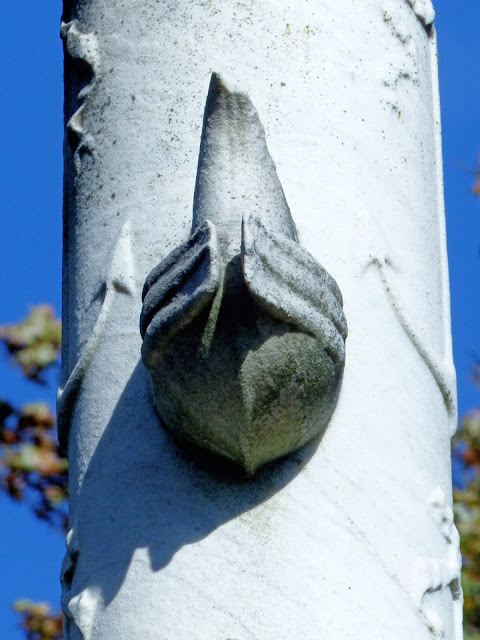 Rostrum
Other Details of the monument include the eagle on the top of the rostral column, 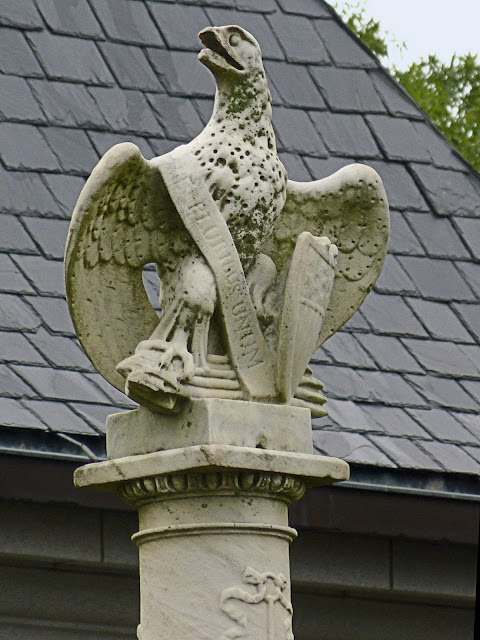 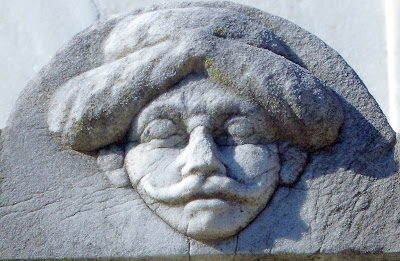 Pirate
Posted by Allen Browne at 6:57 AM