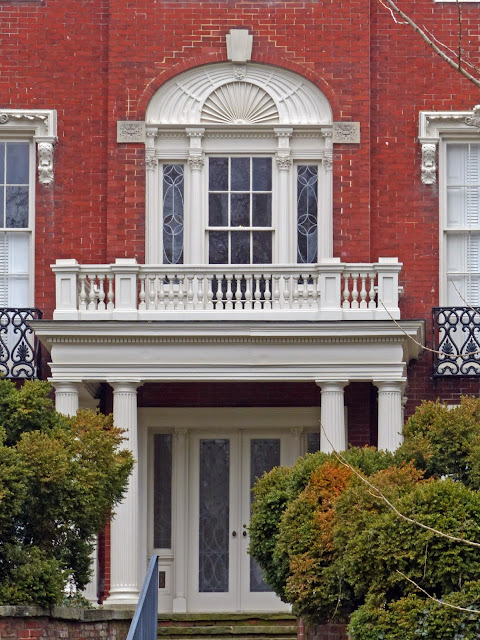 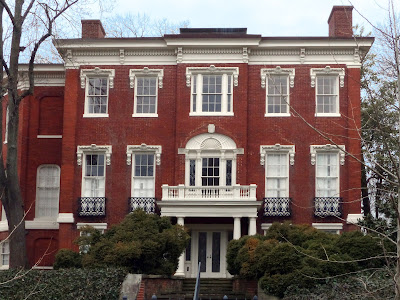 This house on R Street in Georgetown, known as Scott-Grant house or as Rousseau House, was the home of Major General Henry Halleck during the Civil War. The AIA describes it this way:

Almost bombastically Victorian, this pile nevertheless respects the District's classical bent enough to have a well-defined central axis on all three floors. Alabaman A. V. Scott, who built the place, had no use for the house during the Civil War and leased it to a variety of tenants. General Grant himself rented it one summer, hence the second half of the structure's name, but the most memorable lessee may have been Gen. Henry Walker Halleck. General Halleck earned the enmity of his neighbors by quartering enlisted men in the house, turning R Street into a drill field, and having the company bugler sound taps and reveille at dusk and dawn each day. -- AIA Guide to the Architecture of Washington DC by Christopher Weeks, 1974. 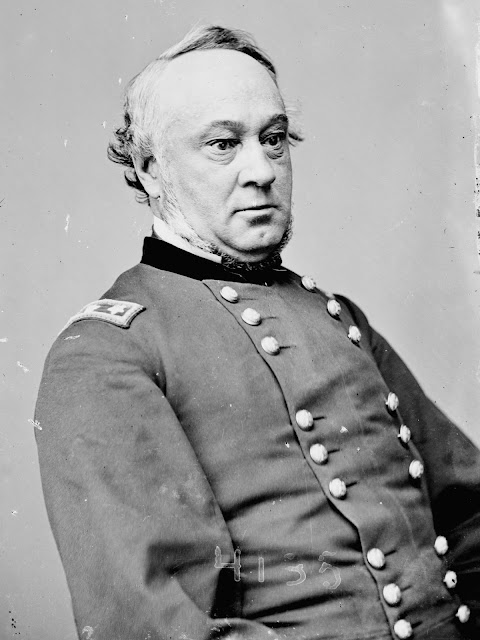 Major General Henry W. Halleck
Currier and Ives, in this print belonging to the Library of Congress, portrayed Halleck looking uncharacteristically like Napoleon. 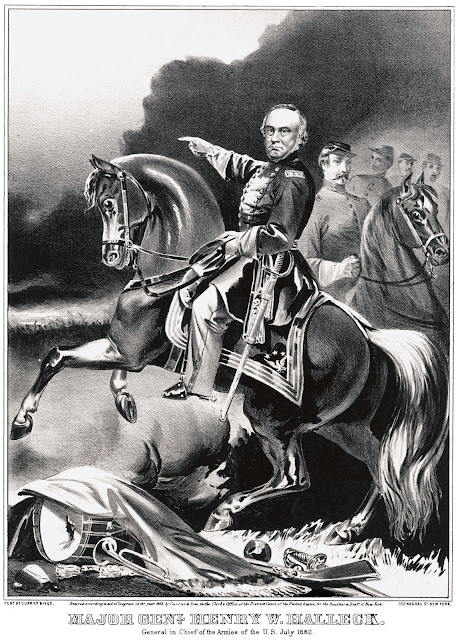 Major Genˡ. Henry W. Halleck
General in Chief of the Armies of the U.S.
July 1862
Halleck, nick-named “Old Brains”, was more a military bureaucrat than a lead-from-the-front general. However, Halleck did translate and annotate Jomini's Life of Napoleon on shipboard travelling to Monterey during the Mexican War.

Gen. Halleck by J. Magee 1861
Lives of Gens Halleck and Pope
by G.W. Richards 1861.
Alfred Vernon Scott  built the house in 1857, when he and his family moved to Georgetown from Montpellier on account of  rumored “negro uprising” in that part of Virginia. Scott had purchased Madison's plantation only a few years before in 1854.  The Georgetown house, on Lee's Hill, was their home until 1860 when Alfred died. His grave is in the nearby Oak Hill Cemetery. 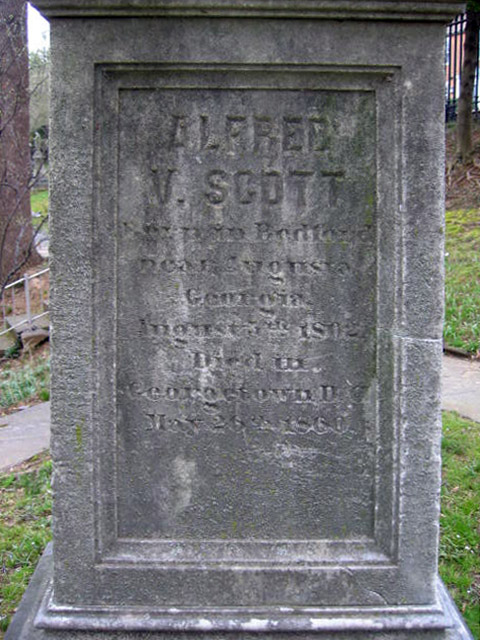 Photo by Loretta Castaldi.
Alfred
V. Scott
Born in Bedford
Near Augusta
Georgia
Died in
Georgetown, D. C.
May 28th 1860
Mrs. Scott went south in 1861, as William Owen Nixon Scott, 1920 tells it: “On July 5 - 1861 she hastily arranged her affairs, and left for the south via the ‘underground railroad’ (running the blockade). This journey during the early war times occupied a week.” General Halleck rented the house in 1862. 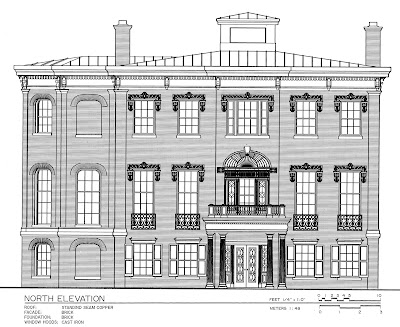 HABS DC-824
Mary A. Mitchell in her 1962 article An Intimate Journey through Georgetown in April 1863, describes the situation at 3238 R Street as experienced by Mrs. Kennon at Tudor Place:

Her boarders were Union officers and she did not allow any war-talk at the table. She can scarcely be blamed for this. Nearby at 3238 R Street lived Lt. Gen. Henry W. Halleck, general-in-chief of the Union armies, in a mansion rented after he arrived from the western front in July of 1862. Built during the 1850's it belonged to a wealthy South Carolinian named Alfred Vernon Scott who had gone south for the duration. Quartered in raw new barracks in the rear was a detail of soldiers. From dawn to dusk Mrs. Kennon could hear the shrill sound of the bugle blowing taps and reveille and the sergeant's incessant commands, despite the intervening foliage between Tudor Place and Lee's Hill where the Scott place was.

The Library of Congress says that “It is commonly accepted, but undocumented that Grant used the house as a summer White House” Carlton Fletcher vigorously disputes that myth and traces its origin in Notes on the Scott-Grant House, The origins of a myth.

The only time that Ulysses S. Grant can be confirmed to have resided in Georgetown is before he was president. Gen. Grant accepted Gen. Henry Halleck’s offer to use his home in Georgetown, D.C. on May 18, 1865, and was there, off and on until July 24, 1865, when Gen. Grant left Washington for an extended summer tour. He did not reside in Georgetown after that. -- Carlton Fletcher 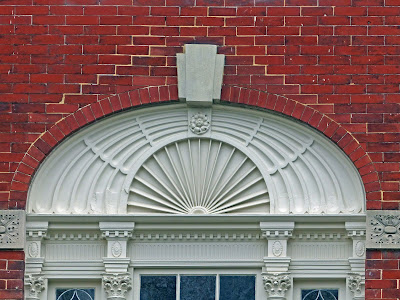 Col. John A. Joyce, the poet, who wrote for The Star for many years, lived in this attractive old residence, and here Mrs. Joyce died. When Col. Joyce passed away, they took his remains a little way down the street to Oak Hill Cemetery and inscribed on his tombstone the familiar lines; "Laugh, and the World Laughs With You; Weep, and You Weep Alone.”

See my 2013 blog entry Laugh and the World Laughs With You.... for a discussion of how Joyce stole the poem that includes that line from Ella Wheeler Wilcox.  Here's Joyce's statue in Oak Hill Cemetery. 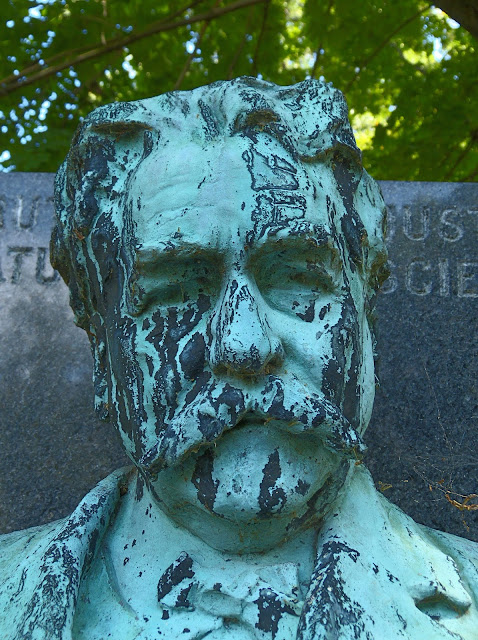 Mrs.Joyce, Katie M. Joyce, died on December 22, 1871. She is memorialized on the pedestal supporting Joyce's Statue at Oak Hill, along with their daughter Katie Darling Joyce. 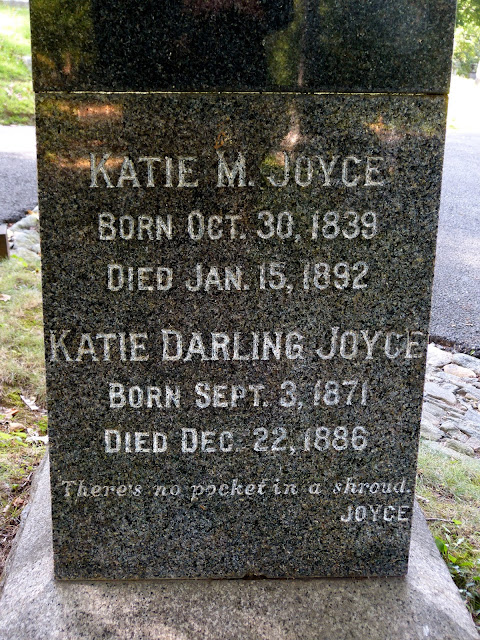 There's no pocket in a shroud - Joyce

And here's Col. Joyce in an ad for Pe-Ru-Na. 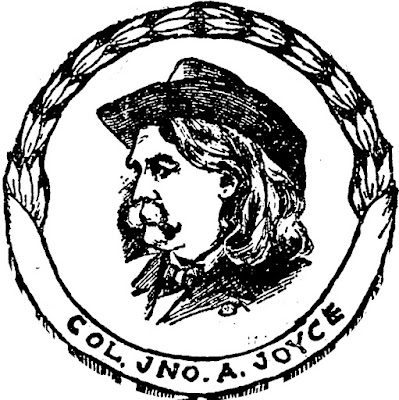 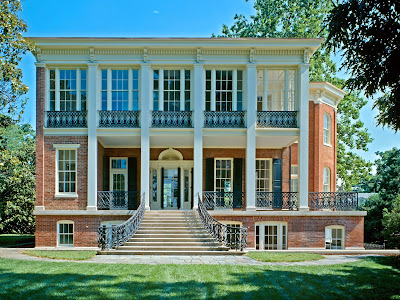 The WPA Writer's Project goes on to say that,  “It is the home of Rear Admiral Harry H. Rousseau's widow, a landscape architect of distinction. Her garden, open during April Garden Week, is notable for its old trees, rock garden, and iris-bordered walks.”

The Rousseaus were living here when Admiral Rousseau died at sea in 1930. This photo accompanied the Washington Times notice of that event, on July 24, 1930. 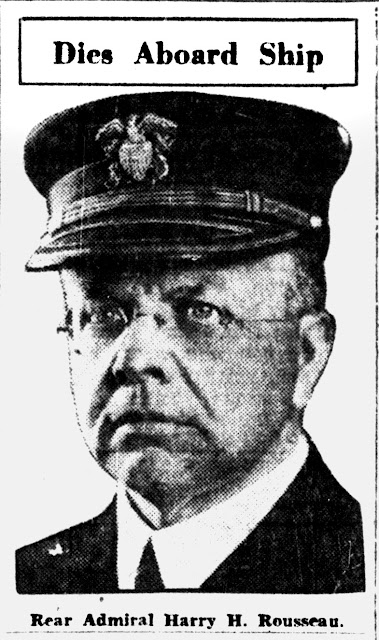 Admiral Rousseau had been instrumental in the creation of the Panama Canal and was chief coordinator and director of naval oil reserves, when he died.  In 1928 he appeared on a 20¢ Canal Zone postage stamp. 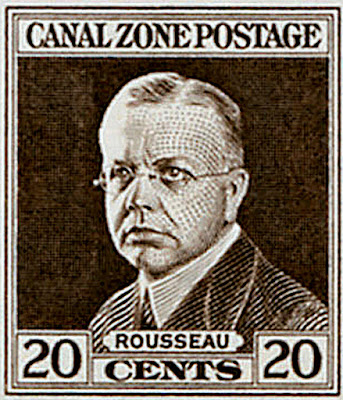 The Library of Congress says that:

During the New Deal, two of President Roosevelt's Brain Trust, Benjamin Cohen and Thomas Corcoran, rented the house for themselves and other young lawyers who drafted the New Deal legislation.

Here we see Cohen and Corcoran as they appeared on the cover of Time Magazine, Sept. 12 1938. Cohen, in glasses, is sitting, Corcoran standing.  The Time article refers to Cohen, Cochran and their cohort as “Janissaries.” 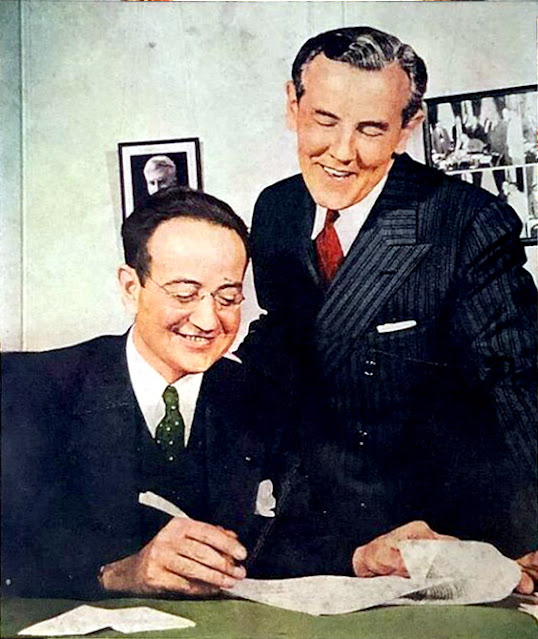 Spartacus Education in  a thorough biography of Tommy Corcoran, gives us this view of “the scarlet fever boys from the little red house in Georgetown.”

Corcoran was a new political type: the expert who not only drafted legislation but maneuvered it through the treacherous corridors of Capitol Hill. Two Washington reporters wrote of him: “He could play the accordion, sing any song you cared to mention, read Aeschylus in the original, quote Dante and Montaigne by the yard, tell an excellent story, write a great bill like the Securities Exchange Act, prepare a presidential speech, tread the labyrinthine maze of palace politics or chart the future course of a democracy with equal ease.” He lived with Cohen and five other New Dealers in a house on R Street; as early as the spring of 1934, G.O.P. congressmen were learning to ignore the sponsors of New Deal legislation and level their attacks at “the scarlet-fever boys from the little red house in Georgetown.”

Right wing Congressman Fred Britten of Illinois dubbed the house “The Little Red House in Georgetown” and accused its occupants of promoting communistic legislation. This 'story in pictures' appeared in the Brownsville Herald on April 27, 1934. 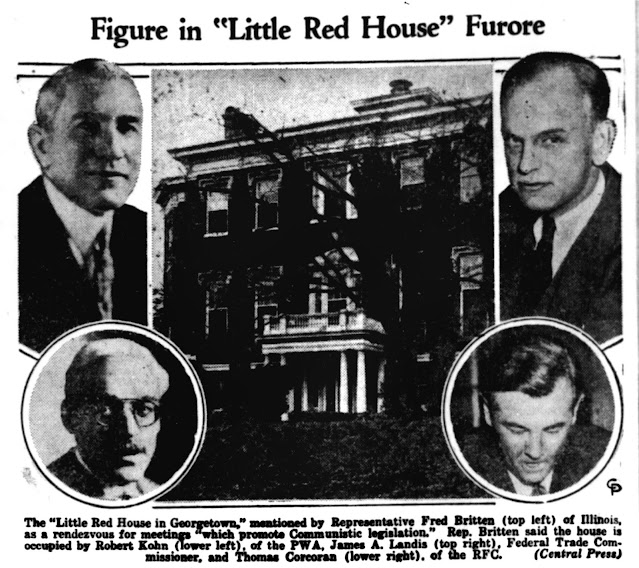 The phrase “Little Red House in Georgetown” echoed the “Little Green House on K Street” in  which corrupt deals of the Harding Administration are said to have been planned;  both terms contrast with the “White House”. See the Washington Evening Star, April 21, 1934 in which Britten calls the New Dealers at 3238 R Street,  “Frankfurter's hot dogs.”
Cohen and Corcoran rented the little red house from Mrs. Rousseau until 1936.

The author of this blog believes he met Tommy Corcoran once on a bus in Washington DC in the late 1970s. He was an old man wearing a flashy sport jacket who introduced himself, adding that he had once been important in this town.

From the late 30s this house was home to Major General Howard C. Davidson, United States Army Air Forces and his wife. They lived here into the 60s. The New York Times described Davidson in his 1984 obituary: “Maj. Gen. Howard Calhoun Davidson of the Air Force, a World War I pilot and commander of the Tenth Air Force in the China-Burma-India theater in World War II, died Wednesday at Walter Reed Army Medical Hospital in Washington.” 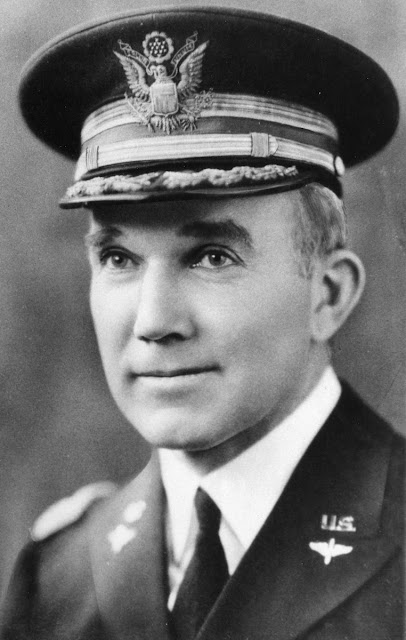 Like Mrs. Rousseau, Mrs. Davidson opened the house to  the public for Garden Week. Here's the house as it appeared in The Washington Evening Star,  March 20, 1938. 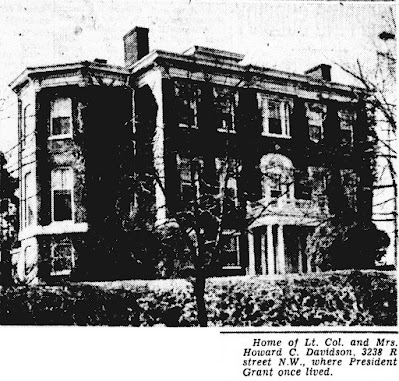 Home of Lt. Col. and Mrs. Howard C. Davidson
3238 R street N.W.
where President Grant once lived.
3238 R Street is currently owned by Texas billionaire Robert Bass and his wife, Anne. (See Robert and Anne Bass live in historic house in Washington, D.C. by Maria Recio in the McClatchy Newspapers, May 8, 2012.)  We can agree with Ben Barnes, former Texas lieutenant governor that “It's a heck of a house..”
Posted by Allen Browne at 10:29 AM