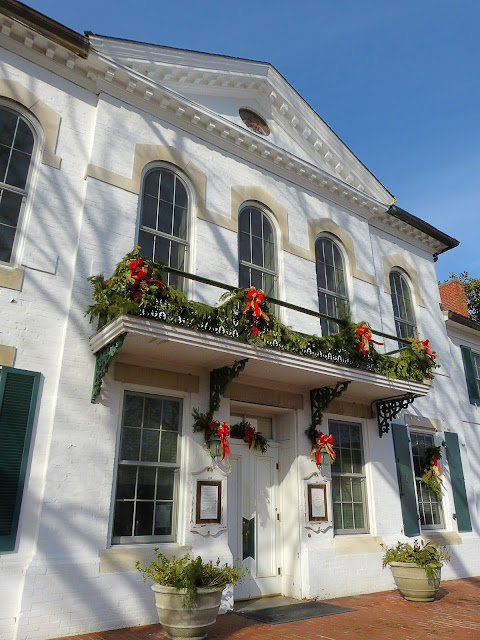 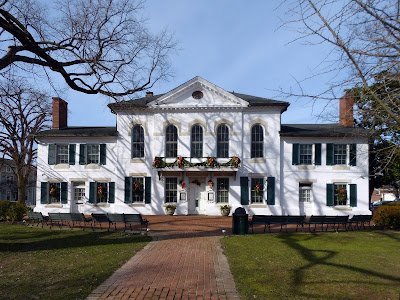 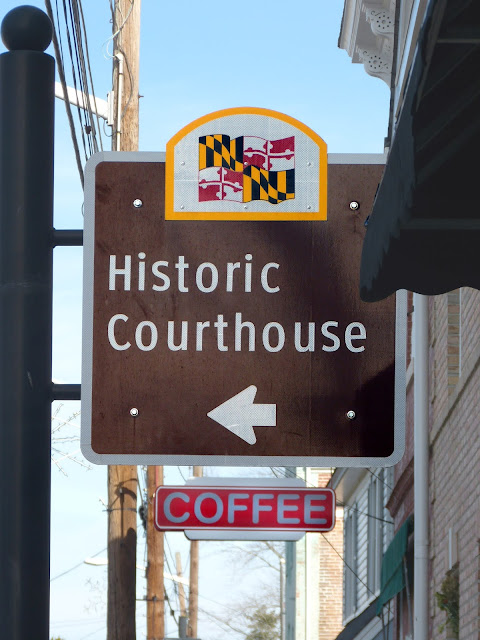 In 2012, paper signs flanking the courthouse door at 100 courthouse square, Centreville Md, told the story of the Courthouse and the town of Centreville. The sign to the right of the front door is entitled: The Queen Anne's  County Court House." 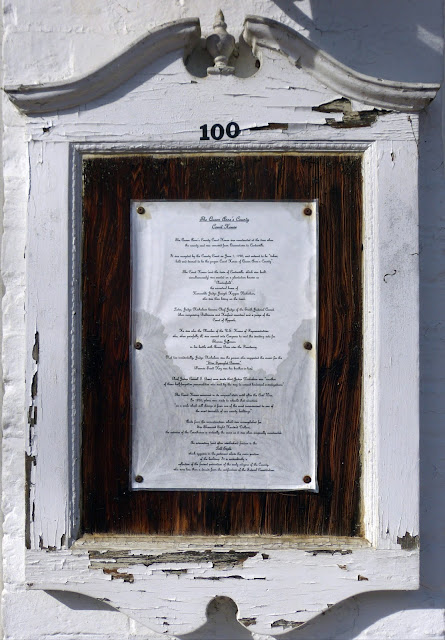 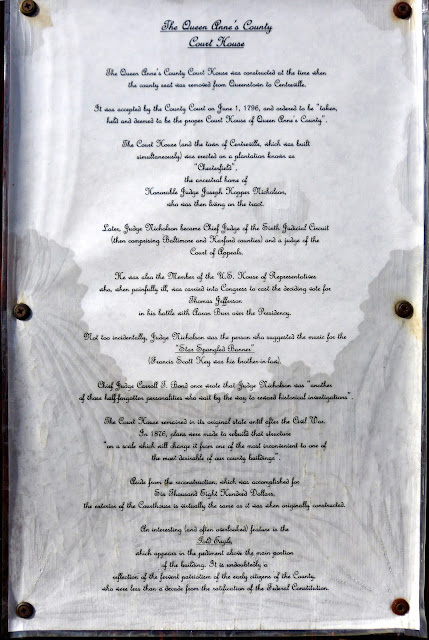 The Queen Anne’s County Court House was constructed at the time when the county seat was removed from Queenstown to Centreville.

It was accepted by the County Court on June 1, 1796, and ordered to be “Taken held and deemed to be the proper Court House of Queen Anne’s County”.

The Court House (and the town of Centreville, which was built simultaneously) was erected on a plantation known as “Chesterfield”, The ancestral home of Honorable Judge Joseph Hopper Nicholson,
Who was then living on the tract.

He was a Member of the U.S. House of Representatives who when painfully ill, was carried into Congress to cast the deciding vote for Thomas Jefferson in his battle with Aaron Burr over the Presidency.

Incidentally, Judge Nicholson was the person who suggested the music for the “Star Spangled Banner”
(Francis Scott Key was his brother-in-law)

Carroll T. Bond once wrote that Judge Nicholson was “another of those half-forgotten personalities who wait by to reward historical investigations”.

The Court House remained in its original state until after the Civil War.
In 1876, plans were made to rebuild that structure “on a scale which will change it from on of the most inconvenient to one of the most desirable of our county buildings”.

Aside from the reconstruction, which was accomplished for Six thousand Eight Hundred Dollars, the exterior of the Court House is virtually the same as it was when originally constructed.

An interesting (and often overlooked) feature is the

Which appears in the pediment above the main portion of the building. It is undoubtedly a  reflection of the fervent patriotism of the early citizens of the County, who were less than a decade from the ratification of the Federal Constitution.

(These same words appear in Maryland Courts: The Queen Anne's County Courthouse)
The latest version of the Gold Eagle can be seen in the pediment over the courthouse door: 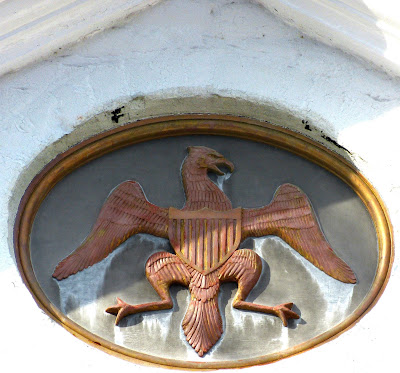 A 1977 statue of Queen Anne dominates the square. 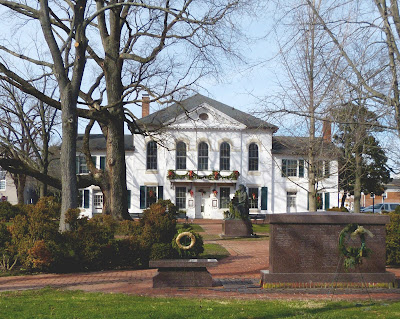 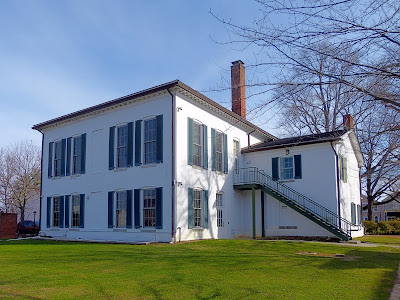 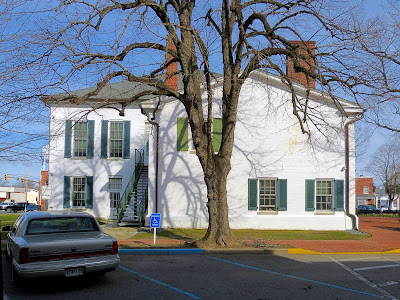 South West Face
Directly across Lawyer's Row, south-west of the courthouse can be found (at least at Christmas time) the law offices of Scrooge and Marley, (The Queen Anne Building, Headquarters of the Inter-Rail Group) at 115 Lawyer's Row. 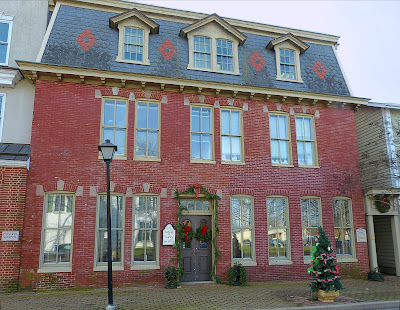 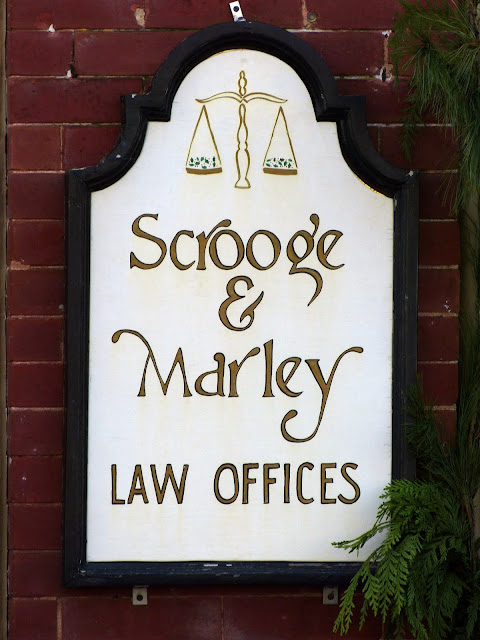 The National Register Nomination Form for the Centreville Historic District gives this information on the Queen Anne Building:

On the left side of the front door of the Courthouse is a sign entitled: "Short History of Centreville". 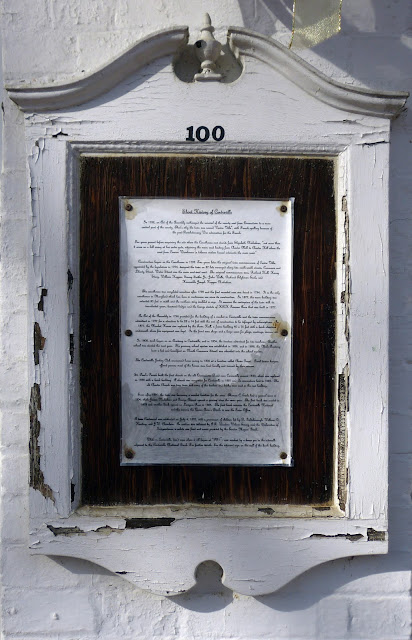 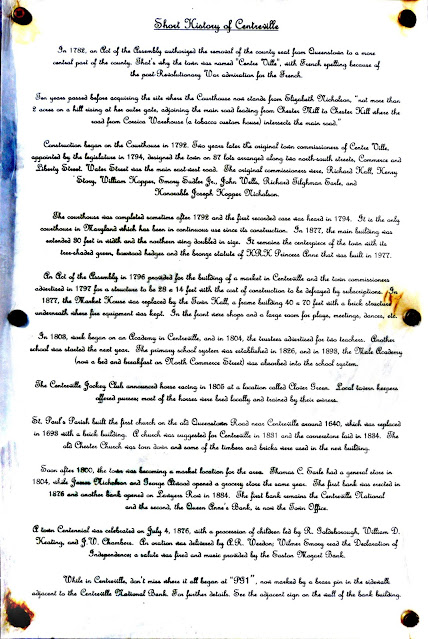 Short History of Centreville
In 1782, an Act of the Assembly authorized the removal of the county seat from Queenstown to a more central part of the county. That’s why the town was named “Centre Ville” with French spelling because of the post-Revolutionary War admiration for the French.
Ten years passed before acquiring the site where the Courthouse now stands from Elizabeth Nicholson, “not more than 2 acres on a hill rising at her outer gate, adjoining the main road leading from Chester Mill to Chester Hill where the road from Corsica Warehouse (a tobacco custom house) intersects the main road.”
Construction began on the Courthouse in 1792. Two years later the original town commissioners of Centre Ville, appointed by the legislature in 1794, designed the town on 37 lots arranged along two north-south streets, Commerce and Liberty Street. Water Street was the main east-west road. The original commissioners were, Richard Hall, Henry Story, William Hopper, Emory Sudler Jr., John Wells, Richard Tilghman Earle, and Honorable Joseph Hopper Nicholson.
The courthouse was completed sometime after 1792 and the first recorded case was heard in 1794. It is the only courthouse in Maryland which has been in continuous use since its construction. In 1877, the main building was extended 80 feet in width and the northern wing doubled in size. It remains the centerpiece of the town with its tree-shaded green, boxwood hedges and the bronze statute (sic) of HRH Princess Anne that was built in 1977.
An Act of the Assembly in 1796 provided for the building of a market in Centreville and the town commissioners advertised in 1797 for a structure to be 28 x 14 feet with the cost of construction to be defrayed by subscription. In 1877, the Market House was replaced by the Town Hall, a frame building 40 x 70 fee with a brick structure underneath where fire equipment was kept. In front were shops and a large room plays, meetings, dances etc.
In 1803, work began on an Academy in Centreville, and in 1804, the trustees advertised for two teachers. Another school was started the next year. The Primary school system was established in 1826, and in 1893, the Male Academy (now a bed and breakfast on North Commerce Street) was absorbed into the school system.
The Centreville Jockey Club announced horse racing in 1805 at a location called Clover Green. Local tavern keepers offered purses; most of the horses were bred locally and trained by their owners.
St. Paul’s Parish built the first church on the old Queenstown Road near Centreville around 1640, which was replaced in 1690 with a brick building. A church was suggested for Centreville in 1831 and the cornerstone laid in 1834. The old Chester Church was torn down and some of the timbers and bricks were used in the new building.
Soon after 1800, the town was becoming a market location for the area. Thomas C. Earle had a general store in 1804, while James Nicholson and George Alwood opened a grocery store the same year. The first bank was erected in 1876 and another bank was opened in Lawyers Row in 1884. The first bank remains the Centreville National and the second, the Queen Anne’s Bank, is now the Town Office.
A town centennial was celebrated on July 4, 1876, with a procession of children led by R. Goldsborough, William D. Keating and J. W. Chambers. An oration was delivered by R. R. Weedon; Wilmer Emory read from the Declaration of Independence; a salute was fired and music provided by the Easton Mozart Bank.
While in Centreville don’t miss where it all began at “PG1”, now marked by a brass pin in the sidewalk adjacent to the Centreville National Bank. For further details. See the adjacent sign on the wall of the bank building.

The brass pin marking PG1 is on the corner of Commerce Street and Lawyer's Row, at the Centreville National Bank building. 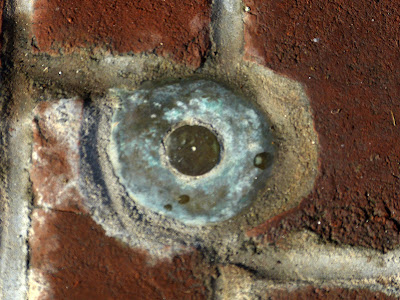 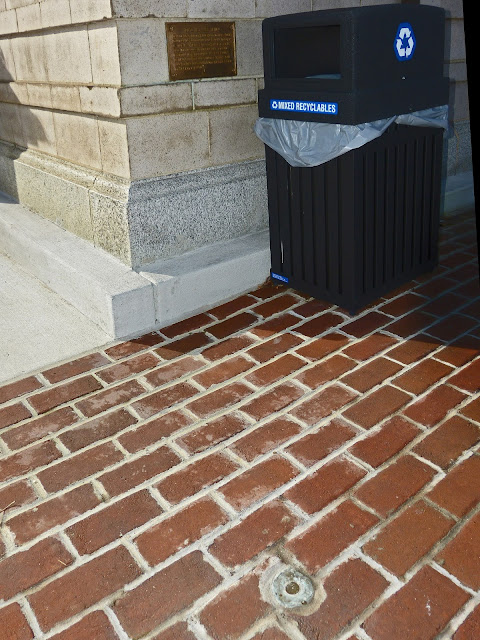 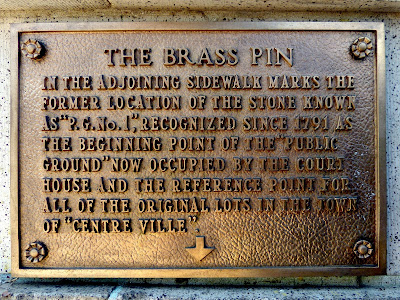 The brass pin in the adjoining sidewalk marks the former location of the stone known as "P.G. No. 1", recognized since 1791 as the beginning point of the "Public Ground" now occupied by the Court House and the reference point for all of the original lots in the town of "Centre Ville". 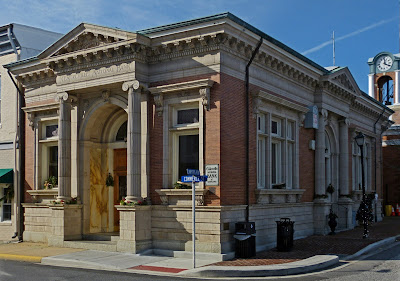 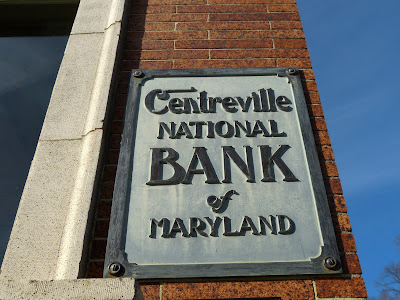 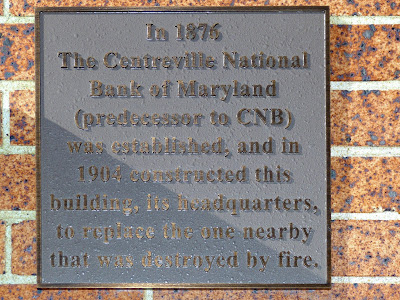 In 1876 The Centreville National Bank of Maryland (predecessor to CNB) was established, and in 1904 constructed this building, its headquarters, to replace the one nearby that was destroyed by fire.