How Beautiful is Death

The Aquila Randall Monument in Dundalk 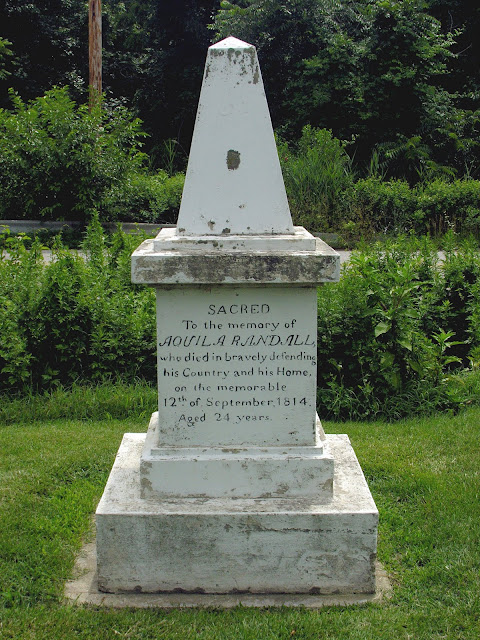 This small monument was erected in 1817 by the comrades of Aquila Randall who at age 24 was killed defending Baltimore at the battle of North Point on September 12, 1814. It stands on North Point Road in Dundalk near Old Battle Grove Road. 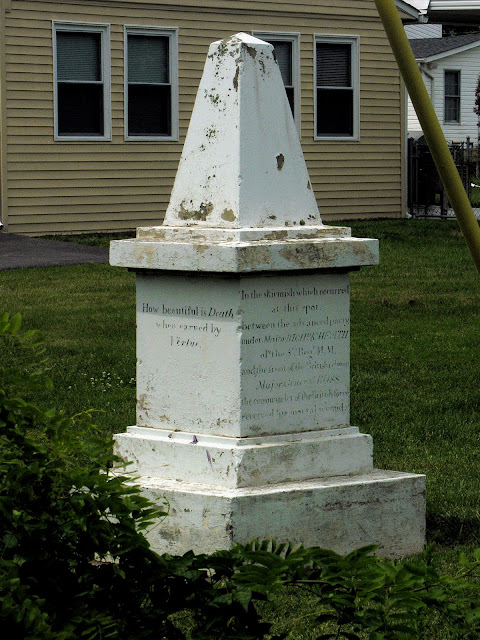 SACRED
to the memory of
Aquila Randall,
who died in bravely defending
his Country and his Home,
on the memorable
12th of September, 1814.
Aged 24 years.﻿

The southeast face tells about the historical event:

The northwest face tells who built the monument:

The First Mechanical Volunteers
commanded by
Captn. Benjn. C. Howard
of the 5th Regt. M. M.
have erected this Monument
as a tribute of their respect
for the memory of
Their Gallant Brother in arms.

And the southwest face (toward North Point Road) has this quote from Addison's influential 1712 play, Cato, a Tragedy:

How beautiful is Death
when earned
by Virtue. 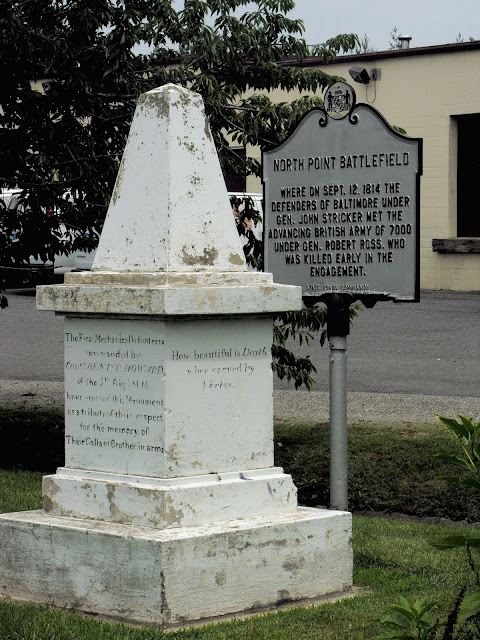 The quotation is from Act 4, Scene 4 of Cato, A Tragedy, a patriotic play popular during the Revolution.

How beautiful is death, when earn'd by virtue!
Who would not be that youth? What pity is it
That we can die but once to serve our country!

On September 11, 1814, British Generals Ross and Cockburn landed troops at North Point, the peninsula between the Patapsco and Back River, and began marching toward Baltimore. They camped at Gorsuch house overnight and resumed their march on the 12th. The advanced guard ran into the elements of the 5th Regiment of Maryland Militia at this place. Ross rode forward to see what was going on. As he turned to go back for more troops, he was hit by American fire. Ross died beside the North Point Road near the Gorsuch house before he could be taken back to his ship. 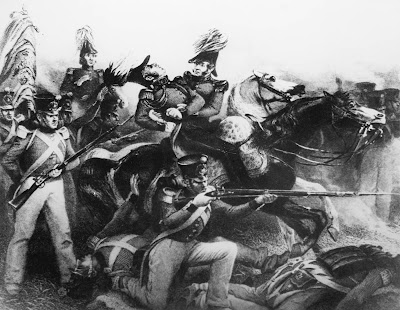 Aquila Randall was the only member of Howard's Mechanical Volunteers to die in the skirmish. Slightly less than three years later on July 21, 1817, Randall's comrades erected this monument. A contemporary  account of the ceremony can be found in Niles' Weekly Register. The celebrants marched out of Baltimore "at an early hour" and gathered at the spot at 11:00. They assembled the monument designed by Lieutenant Towson with assistance from Col. Small. "[Towson] aimed at simplicity and neatness and he has not been disappointed. The monument is a pyramid of white stone, about four feet high, resting on a well proportioned pedestal which bears the...inscriptions."

Here's what it looked like in the 1850's (From Lossing's Pictorial Fieldbook): 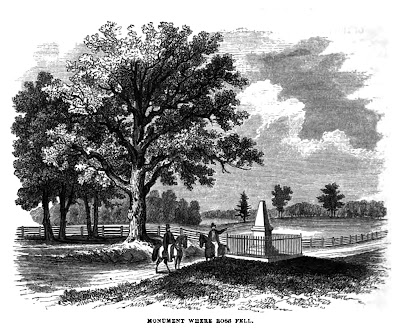 Sometime in the 19th century, a tavern was built nearby called the Monument House Hotel. Later a post office was established in the tavern.

This is how it looked in 1914, the centennial of the battle. 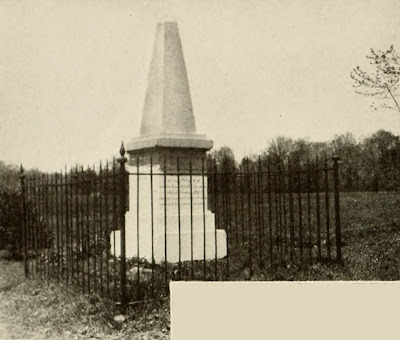 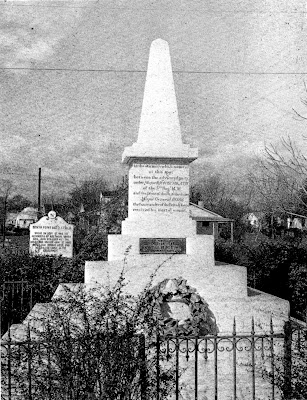 The plaque under the southeast face said "Rebuilt Oct. 14, 1945 by Eli Buniavas (Monument House)." This photo of Eli Buniavas appeared in the Baltimore Sun in 1946. 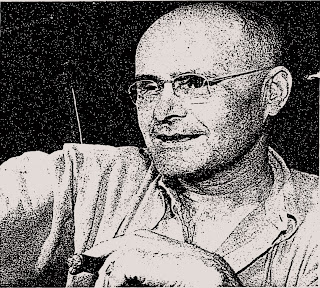 The state roads commission historical marker was added in the 50's. 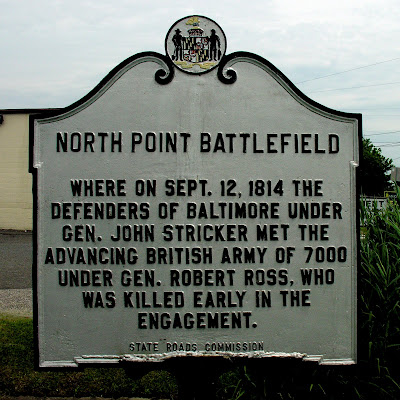 As you can see, the monument was considerably south of the State Roads Commission marker. When Mr. Buniavas died in 1962, his executor sold the bar to a partnership and left the monument to Mrs. Rose Groh. In 1977, Mrs. Groh sold it to a developer named J. Sheridan McClees. In that year, John McGrain in an inventory form for The State Historic Site Survey told the story this way:


On the 160th eve of putting up the monument, July 20, 1977, Dundalk and "Neck" residents were astonished to find the monument disassembled, and there was even greater consternation in the Baltimore County law office and other agencies, when the Buniavas concrete pylon or pedestal was bulldozed on the next day, the anniversary itself. There was much relief among preservationists when Mr. McClees explained that he intended to replace the monument in its 1817 condition when the construction work was completed.

McClees built a warehouse north of the old Monument House bar, restored the monument to its original appearance by removing the wedding-cake base, and moved it north to its present site right next to the historical marker. He donated the monument to Baltimore County in 1979. 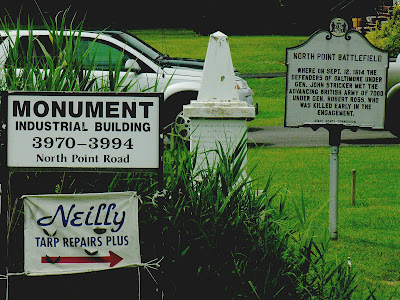 The 1817 monument is now almost in the front yard of the house at 3950 North Point Road. 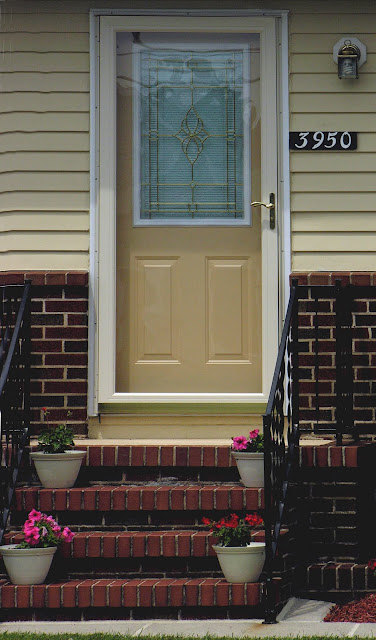 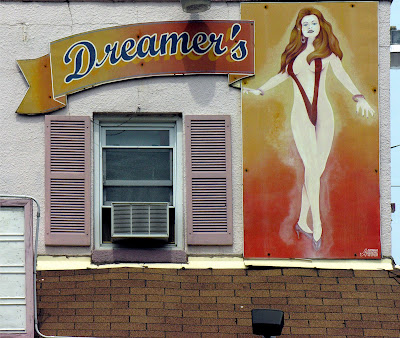 When I visited, the young lady behind the bar was wearing less than the one illustrated above, and seemed considerably younger, too. The 19th century building is completely hidden inside the brick and block structure at 4000 North Point Road. 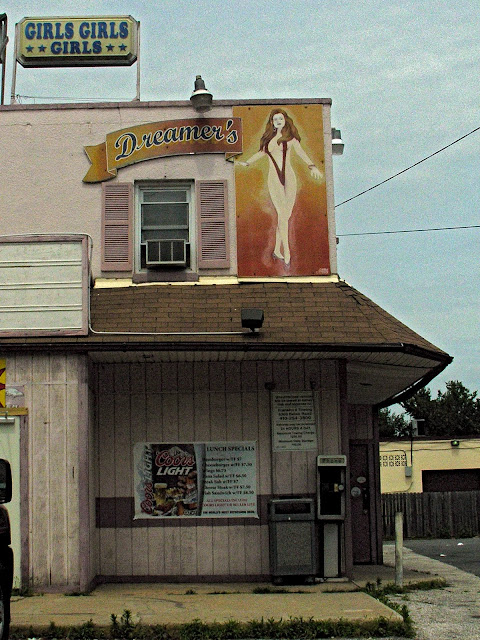 The original site of the Aquila Randall monument is right where the fallen sign is in this next photo -- directly in front of Dreamers and across from BD Health. 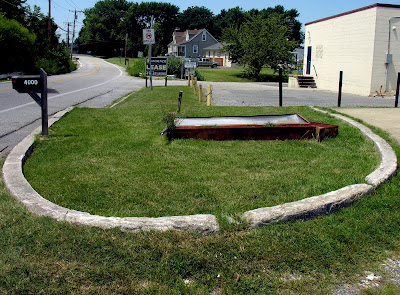 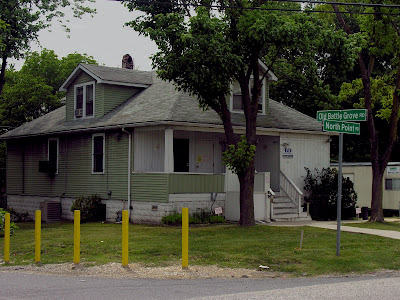 At the corner of North Point Road and Old Battle Grove Road, directly across the street from Dreamer's, BD Health Services is one of Baltimore's three methadone maintenance clinics. 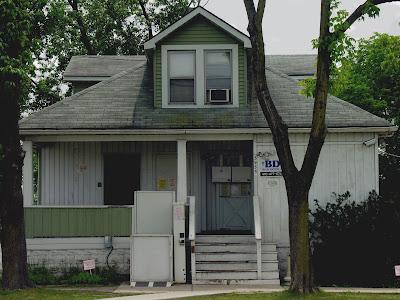