The Kidnapping of Pocahontas 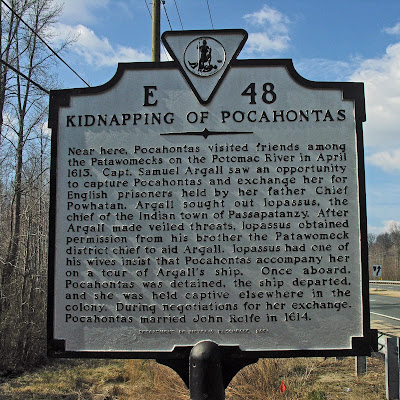 on US 1, at Potomac Creek

Near here, Pocahontas visited friends among the Patawomecks on the Potomac River in April 1613. Capt. Samuel Argall saw an opportunity to capture Pocahontas and exchange her for English prisoners held by her father Chief Powhatan. Argall sought out Iopassus, the chief of the Indian town of Passapatanzy. After Argall made veiled threats, Iopassus obtained permission from his brother the Patawomeck district chief to aid Argall. Iopassus had one of his wives insist that Pocahontas accompany her on a tour of Argall’s ship. Once aboard, Pocahontas was detained, the ship departed, and she was held captive elsewhere in the colony. During negotiations for her exchange, Pocahontas married John Rolfe in 1614.

Matoaks, known as Pocahontas, was around 19 years old when she became victim of international terrorism in 1613. She was lured aboard a ship on a false pretense and held hostage by the invading English. They offered to return her to her father Powhatan in turn for captured Englishmen and arms. Powhatan only partially met English demands and Pocahontas was held for more than a year. Her conditions of confinement are not well known. Some reports say that she was treated well; others say she was raped. In a kind of Stockholm situation, she began to identify with her captors, converted to their religion, changed her name, and began a romantic relationship with one of them. She married proto-tobacco magnate John Rolfe in 1614 and had a son Thomas Rolfe in 1615. As Lady Rebecca Rolfe, she travelled to England in 1616 where she was treated as an exotic celebrity. 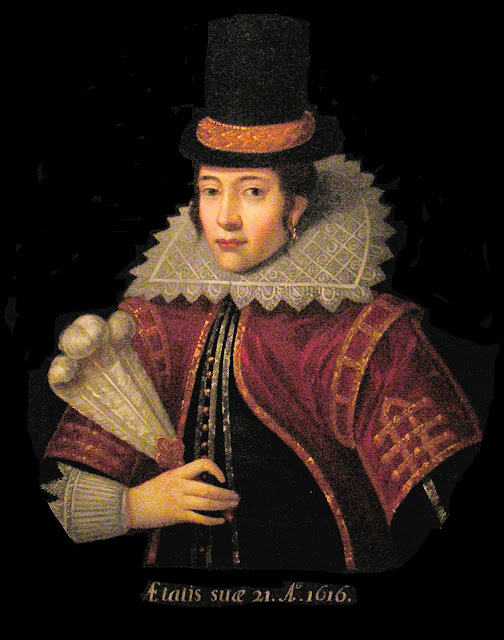 She died on the eve of returning to America in 1617 at age 21 or 22, victim to one of the diseases that constituted a major weapon in the European conquest of the Americas. 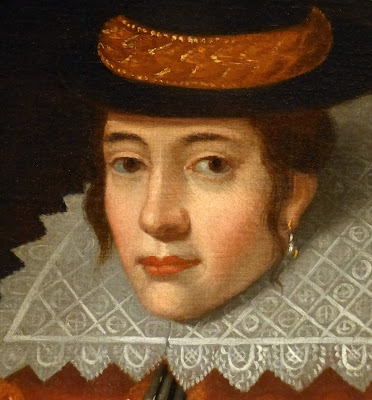 Near the mouth of this creek, several miles east, explorers in 1608 found an Indian village called ‘Petomec,’ from which the river took its name. There the Indian princess, Pocahontas, was kidnapped by Captain Argall in 1613. There travelers landed from steamers to take the stage to Fredericksburg; early railroad terminus. Charles Dickens landed there, going to Richmond, and returned the same way, March, 1842.

While this is not quite the "snowplow revisionism" of The Last Indian Outrage it does represent a step toward a more explanatory, less commemorative style of historical marker.

Click here for a look at this and other  portraits of Pocahontas.