The Boy Martyrs of Baltimore 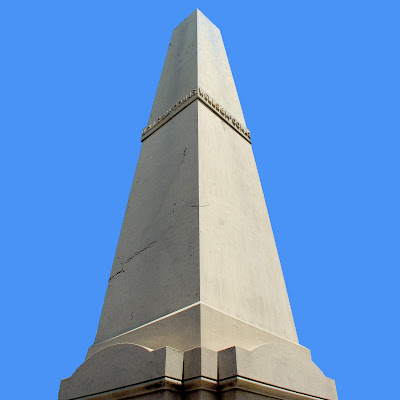 The Wells and McComas Monument at East Monument, and Aisquith Streets (Ashland Square) in Baltimore 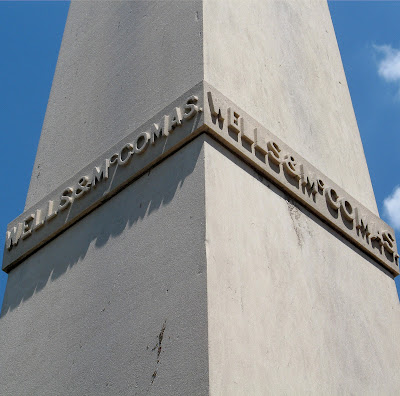 Daniel Wells and Henry McComas were mere boys on September 12, 1814, when they died at the Battle of Northpoint. Daniel was almost 20 and Henry was almost 19. This monument marks their common grave. 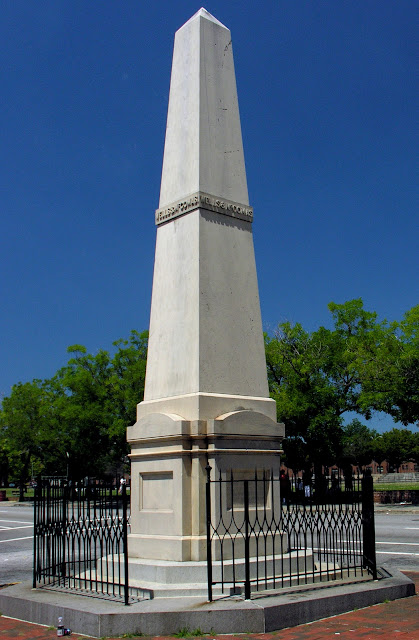 The inscriptions constitute their epitaphs.
﻿﻿ 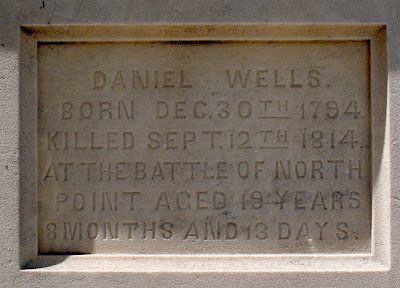 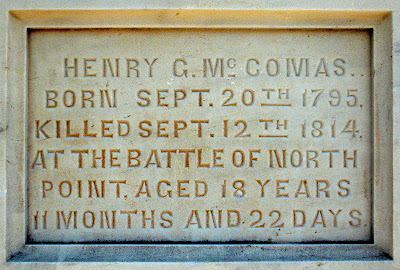 Wells and McComas were leather worker's apprentices and members of Aisquith's rifle company at the time of the British invasion of Baltimore. They are jointly acclaimed in the folklore of the battle of  North Point to be the sharp shooters who killed British General Robert Ross at the the site of the Aquila Randal monument.  Christopher George recounts the legend this way:


Legend has it that Wells and McComas had seen Ross at Bladensburg on August 24, 1814, when the British routed the American militia under Brig. Gen. William H. Winder before sacking Washington. Early on the morning of September 12, as the British advanced toward Baltimore, the story goes, the word was passed down the line, "Remember, boys, General Ross rides a white horse today."

How would the Americans have known what color horse Ross would have been riding? In an 1831 reminiscence, the Royal Navy lieutenant who took Ross's body down to the landing place clearly remembered "the dead general 's servant leading a magnificent black horse"!  Be that as it may, the story goes that our heroes recognized Ross as he rode up Long Log Lane (present-day Old North Point Road). McComas said, "I see a mark." To which Wells replied, "So do I." They each took shelter behind separate trees and "fired simultaneously." (To be cynical, the latter is essential so they can get equal credit for the one bullet that killed Ross!) As Ross fell, the British troops fired toward the telltale smoke and both fell dead. When his body was recovered several days later, it was thought that McComas had been in the act of reloading when he was shot through the heart. Wells meanwhile is said to have been shot through the back of the head.

H.G. McComas and D. Wells also appear among the names of the dead on the Battle Monument in Baltimore's Monument Square. 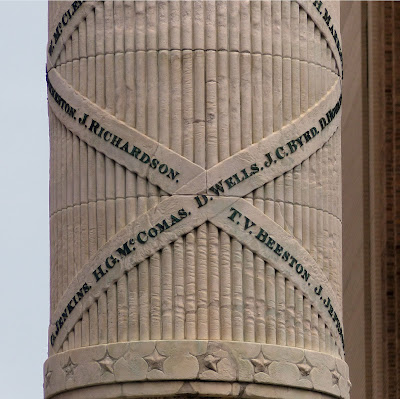 The boys were originally buried in Second Baptist Cemetery where Johns Hopkins Hospital now stands and were later moved to Greenmount cemetery. In 1858 they were moved again to this spot in anticipation of the erection of an obelisque commemorating their bravery. The monument was not finished until 1872.  As William Marine, 1913, tells it:


On September 13, 1858, the bodies of Daniel Wells and Henry G. McComas were removed from a vault in Greenmount Cemetery and reinterred with full military honors in Ashland Square, where the monument now stands. There was a large military parade and the speakers of the occasion were Mayor Swann and Judge John C. Legrand. These unusual honors were paid to the remains of Wells and McComas on the supposition that these two young volunteers had been responsible for the death of General Ross, in the skirmish at North Point, forty-four years before. Subscriptions were started for a monument to cover the remains, but it remained uncompleted until 1872, when provision was made by the City Council for its completion. Resolution 348, sess. 1872, is as follows:

.. Resolved, By the Mayor and City Council of Baltimore, That John W. Colley, Inspector of Public Buildings, be, and he is hereby authorized and directed to complete the unfinished monument on Ashland Square, at the intersection of Gay and Aisquith streets, to the memory of those gallant young heroes Wells and McComas, who on the 12th of September, 1814, sacrificed their lives in defending the city from the brutal battle cry of "Booty and Beauty."

This Broadside ballad to tune of the Star Spangled Banner commemorates the event.

I'll only subject my readers to one verse of this doggerel.

Hear th' impious commander, with bold prancing steed.
Belch forth imprecations, as onward he rushes;
But hark! a sharp fire!—ROSS falls! falls to bleed,
Deadly wounded by shots from two boys in the bushes!
'Twas McCOMAS and WELLS—so Fame the fact tells;—
This heroic deed their fame, evermore swells,
As MARTYRS OF LIBERTY!—And we now raise
A monument high, to continue their praise.


The popularity of the Wells and McComas story was further heightened on the evening of September 15, 1859 at the Holliday Street Theatre in Baltimore, when the famous playwright, dramatist, actor and theatre manager Clifton W. Tayleure (1832-1891) produced in three acts “The Boy Martyrs of Sept. 12, 1814: A Local Historical Drama.” It was complete “with representations of The Battle of Bladensburg, The Rescue of the Colors, The Bombardment of the Fort, Death of Ross, and the Battle of Baltimore.”

The last two lines of Tayleure's play go this way: Ben Sessford, a relic of the Old Line, says "Let their winding sheet be the banner they died in defending." Walter Mason, Captain in the Baltimore Rifle Battalion replies, "And in the glorious list of the patriots, whose blood has consecrated that starry flag, unborn ages of freemen Shall read with pride, the names of the BOY MARTYRS OF BALTIMORE."

In 2014, the boy martyrs were portrayed in 1814! The Rock Opera by Dudley and Israel. They sing a song called Killing The General,with this chorus:


Kill the general, kill the general
Gonna stand 'til we're beat'n the English back
Give the general one hell of a send off
Gonna fire and fire 'til they're all dispatched


The Monument looked like this in the program of the 1914 Star Spangled Banner Centennial celebration: 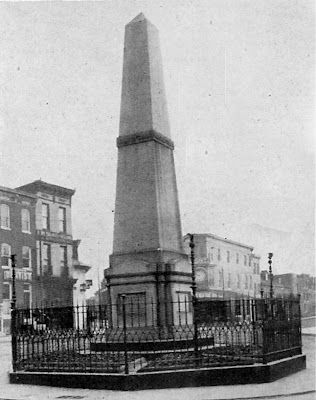 Today the monument is in front of the Monument East Apartments. Reflecting the architectural fads of the late 1970's, Monument East is a mixed population public housing project belonging to the Baltimore Housing Authority. 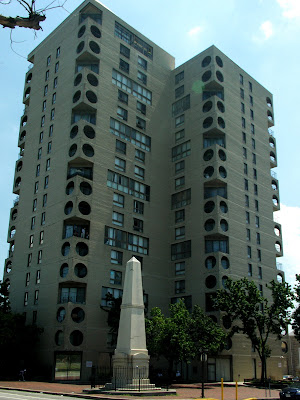 This resident of Monument East was identified as "Clint Eastwood" by his companions sitting around the door of the building.  Amid much laughter, I promised Mr. "Eastwood" and his friends that I'd put his photo in my blog. 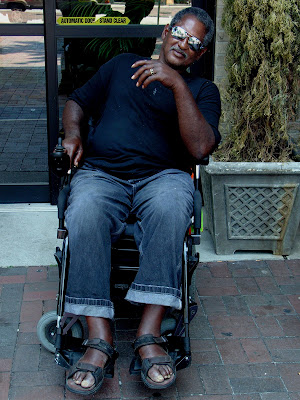 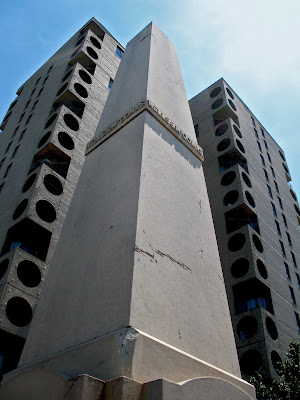 Across Aisquith Street is Oldtowne Mall, a disasterous example of 1970s urban renewal. 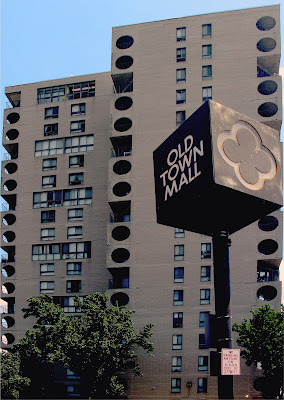 Almost all the businesses on this closed-off street are boarded up. 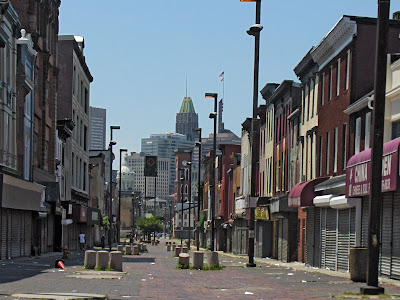 One exception to this depressing situation is the Oldtown Flava Barber Shop, a thriving friendly and welcoming local business. 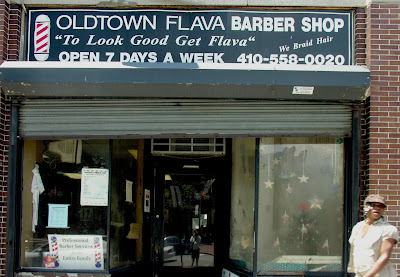 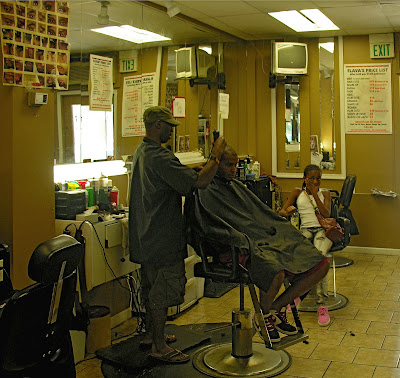 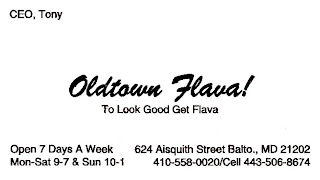 To Look Good Get Flava