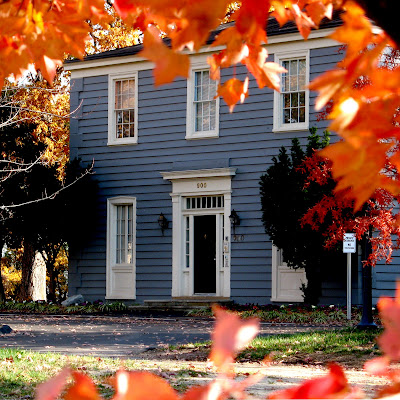 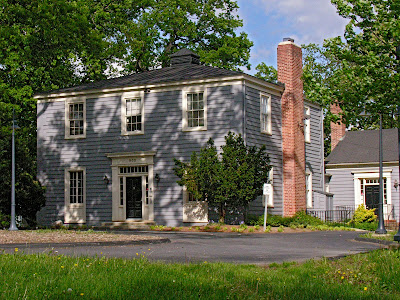 This old house on the north-eastern boundary between DC and Maryland was built by Francis Preston Blair around 1849 as a summer residence for his son James.  A county parks historical marker elaborates. 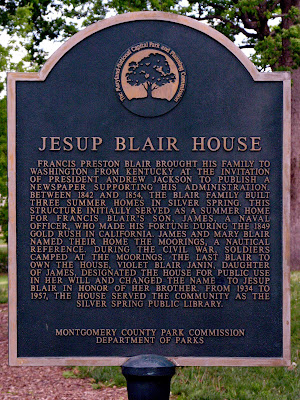 FRANCIS PRESTON BLAIR BROUGHT HIS FAMILY TO WASHINGTON FROM KENTUCKY AT THE INVITATION OF PRESIDENT ANDREW JACKSON TO PUBLISH A NEWSPAPER SUPPORTING HIS ADMINISTRATION. BETWEEN 1842 AND 1854, THE BLAIR FAMILY BUILT THREE SUMMER HOMES IN SILVER SPRING. THIS STRUCTURE INITIALLY SERVED AS A SUMMER HOME FOR FRANCIS BLAIR'S SON, JAMES, A NAVAL OFFICER, WHO MADE HIS FORTUNE DURING THE 1849 GOLD RUSH IN CALIFORNIA. JAMES AND MARY BLAIR, NAMED THEIR HOME THE MOORINGS, A NAUTICAL REFERENCE. DURING THE CIVIL WAR, SOLDIERS CAMPED AT THE MOORINGS. THE LAST BLAIR TO OWN THE HOUSE, VIOLET BLAIR JANIN, DAUGHTER OF JAMES, DESIGNATED THE HOUSE FOR PUBLIC USE IN HER WILL AND CHANGED THE NAME TO JESUP BLAIR IN HONOR OF HER BROTHER. FROM 1934 TO 1957, THE HOUSE SERVED THE COMMUNITY AS THE SILVER SPRING PUBLIC LIBRARY.

On August 8, 1850, violence broke out in front of the house on Georgia Avenue, then the 7th Street Road or Brookeville Turnpike. 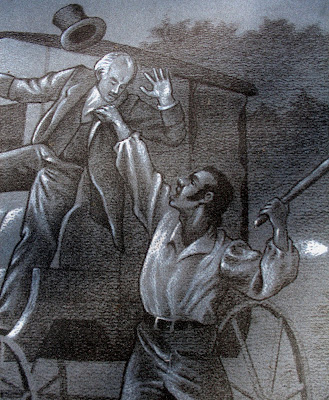 William L. Chaplin, a prominent abolitionist who had earlier been the "mastermind" behind the failed attempt of 77 enslaved people to escape on the Pearl, was forcibly arrested by a DC sheriff's posse. 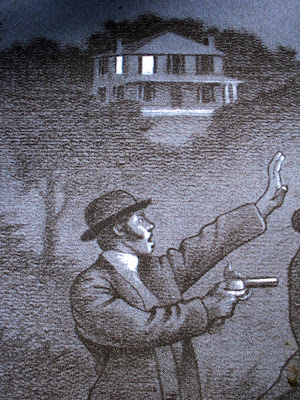 The Preservationist tells it this way:


Although the Blairs were probably unaware at the time, an important incident involving the Underground Railroad occurred right in front of the house on August 8, 1850, when a hired carriage was forcibly stopped by a Sheriff’s posse from Washington, D.C. and a shoot-out ensued. The carriage was driven by William Chaplin, who was unarmed, and was carrying two men attempting to escape from slavery: Garland White, belonging to Senator Robert Toombs of Georgia, and Allen, belonging to Senator Alexander H. Stephens of Georgia. The posse consisted of six men led by John Goddard who were heavily armed and shot into the carriage after stopping it by ramming a fence rail through the wheel spokes. At least one of the fugitives returned fire before jumping from the carriage and running away. Mr. Chaplin was hauled from the carriage and beaten. Both African Americans were slightly wounded as was one of the members of the posse. Allen was returned to his owner, and Garland White turned himself in three days later. White later escaped and served as chaplain for the 28th regiment, U.S. Colored Troops in the Civil War. 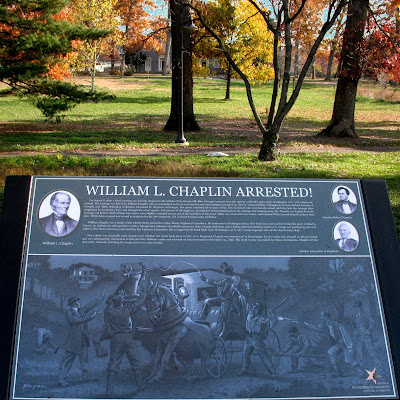 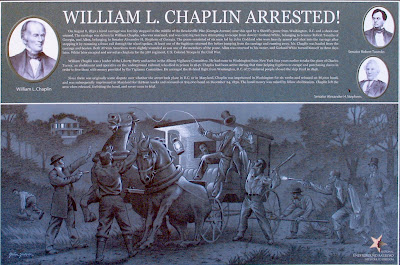 The wonderful illustration of Chaplin's arrest is the work of John Yanson, a well known illustrator.

In 193﻿3 Violet Blair Janin, F. P. Blair's granddaughter, died and left this property to the State of Maryland in honor of her brother, Jesup Blair. In 1939 the park was given to Montgomery County. The old house filled many roles over the years.  It was the Silver Spring Public Library until 1957.

The Silver Spring Three -- An Act of Love

In 1969, the Jesup Blair mansion housed Draft Board 53.  On May 21, three anti-war protesters (Jonathan and Leslie Bayless and Mike Bransome) broke into the Draft Board offices, smeared black paint and "what appeared to be blood" around, and threw typewriters out windows. A reporter and a photographer had been notified ahead of time. Les Bayless, who was out on bail at the time, had three more years tacked onto his five-year sentence for draft evasion. As Hit and Stay says:


[Micheal] Bransome was sentenced to three years in prison. In 1970, he was granted a furlough months ahead of a possible early release and ran away, making him a federal fugitive until that charge was dropped two decades later. At 19, he sneaked into Canada, and a year later flew to Sweden. In Sweden, which offered sanctuary to hundreds of American war objectors, the dropout from Albert Einstein High School in Kensington, Md., learned a new language, started a business, studied and became a doctor, married, raised a family — and dreamed of returning home.

Dr. Micheal Lee Bransome still lives in exile in Sweden. You can read about him in his Pardon Me blog. 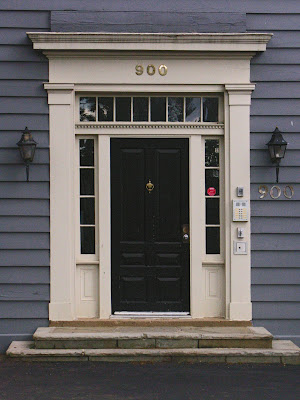 An "Entry Feature" added in the 2005 renovation has a verse of a poem by Violet Blair Janin on a curved stone wall. Perhaps the circle was intended to contain a sculpture. 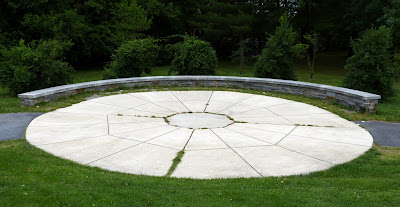 I think of the joyous e'enings
Under our old oak trees,
With the moonlight shadows moving
When stirred by the gentle breeze.
Violet Blair Janin, 1850 - 1933

Violet Blair Janin is perhaps best known for her letters to her husband Albert C. Janin on the subject of contraception. Violet Blair Janin was a founder of the DC Colonial Dames, a nativist and an anti-suffragist. The verse is an excerpt from a poem expressing love not for her husband but for a Austro-Hungarian diplomat named Count William Lippe-Weisenfeld. Another verse goes like this:


I think how he sat beside me,
His strong hand clasped in mine
Of the tender words he was breathing
As we watched that moon decline.

This old chimney in the back yard of Blair house is probably the last remnant of a small brick school house known as the Blair Cottage. 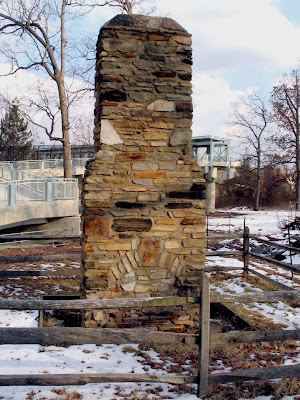 This oak themed sculture, "Passage" by Linda de Palma, stands on the stone wall in front of Jesup Blair Park. 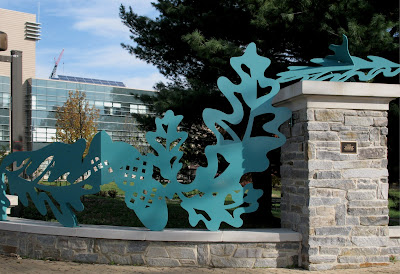 A stange structure, reflecting the spring for which Silver Spring was named, greets travellers on Georgia Avenue as they leave the District. 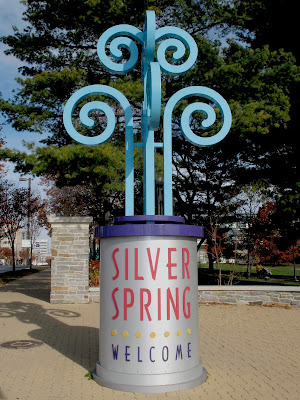 Nearby businesses include State Line Auto Service on the DC side and Grafixx Tattoo in Maryland. 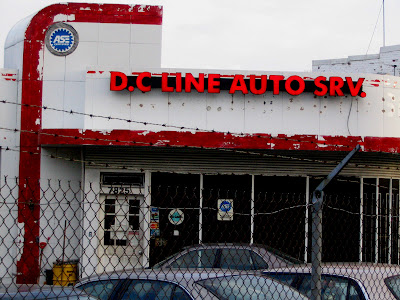 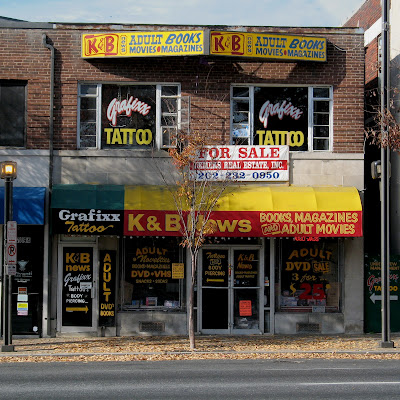 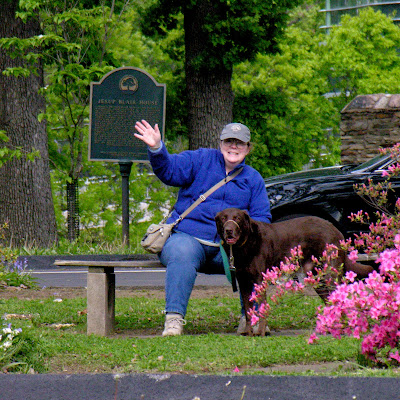