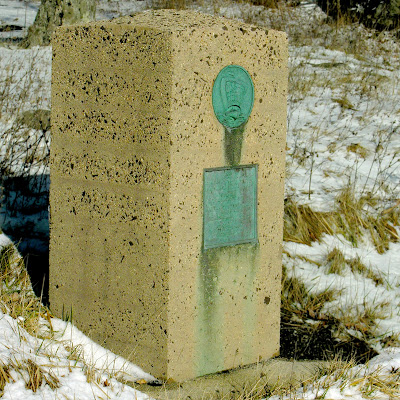 ﻿US Route 50 on the top of Backbone Mountain 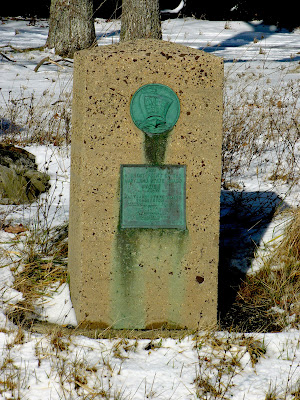 "A concrete monument on top of a mountain in western Maryland marks the highest spot on the State's road system. It honors a famous Baltimore name, memorializes Maryland's stand during Prohibition, and has a copper box full of trinkets sealed inside it." -- John C. Schmidt in The Baltimore Sun, 1954 (Repinted in The Glades Star, Vol. 6, No. 6, Dec. 2000.) 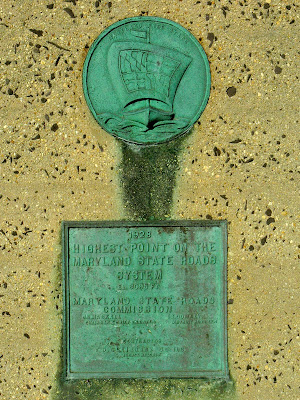 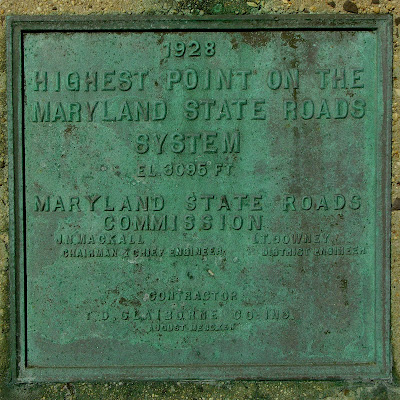 The round plaque shows the State Roads Commission seal -- a ship with Maryland's flag on its sail -- and bears the inscription "Maryland Free State." 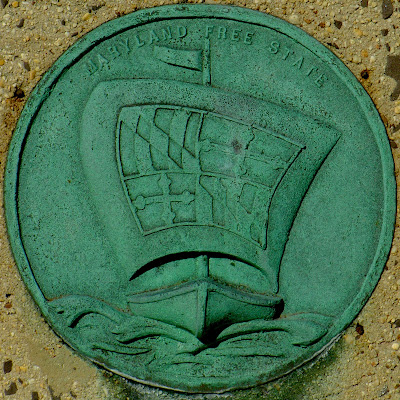 More mysteriously, on the back we find another bronze plaque with a coat of arms labeled "Mencken." 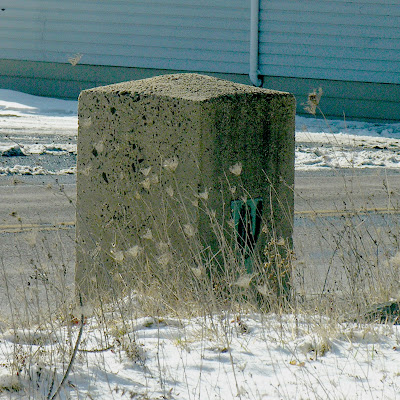 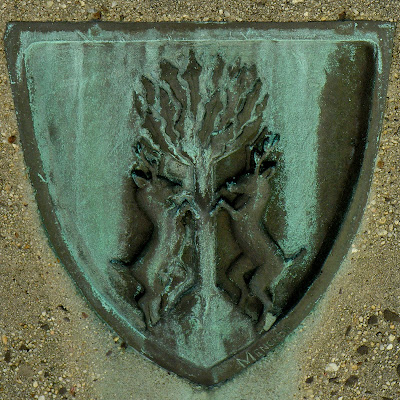 In 1928, civil engineer August Mencken was working for Claiborne Co., leading a road crew widening US Rt. 50. Mencken's memory of the event is quoted by Schmidt, "I knew when we got to the top, that we were at the highest point on the Maryland highway system, and thought some of the people passing by might be interested to know it." Mencken had the bronze plaques cast at his own expense in Baltimore, including his family coat of arms. "The whole monument cost $30, if it cost that much." Mencken remembered. 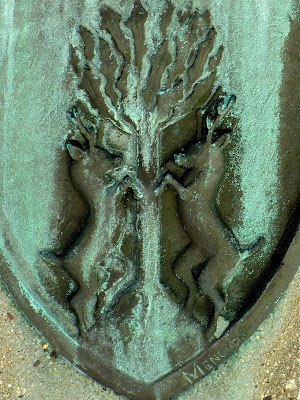 August Mencken, Jr., was the son of cigar magnate August Mencken of Baltimore and younger brother of Henry L. Mencken, famous journalist and author. In retirement, August Mencken, too, became an author. Among several books, he wrote By the Neck, A Book of Hangings. 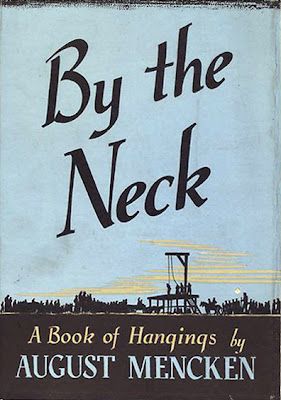 The slogan "Maryland Free State" is a contemporary reference to what has become one of Maryland's nicknames. It does not refer to Maryland's stance on human slavery; Maryland was a slave state during the Civil War. It refers to Maryland's refusal to pass enabling legislation during prohibition. When Congressman William D. Upshaw of Georgia denounced the State of Maryland as traitorous in 1923 for its failure to support prohibition, Baltimore Sun editor Hamilton Owens wrote a humorous editorial entitled "The Maryland Free State" in which he suggested that Maryland should secede rather than submit to prohibition. Although the editorial was never published, the phrase continued to appear in Sun editorials and caught on with the public. H. L. Mencken was a major opponent of prohibition and did much to popularize the nickname "Free State".  The 1954 Sun article continues, "Erecting the monument five years later, August saw his chance to memorialize the phrase and took advantage of it... And to the best of his knowledge it remains the only monument in Maryland to the 'Free State'."

Embedded in the concrete is a tin box made by W. E. Shirer of Oakland -- Oakland's oldest business, today -- containing "among other things, a copy of the Baltimore Sun of the day, a set of plans for the road, a few pennies, and 'the usual junk that people throw in a cornerstone box'."

The monument is across Rt. 50 from Backbone Mt Off-Road & Auto Repair, which sells the kind of suspensions that lift monster trucks high off the ground. 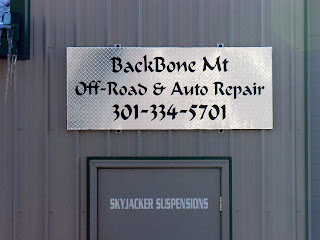 The 1954 photo shows the monument in front of the Maryland Motel at 4651 George Washington Highway. 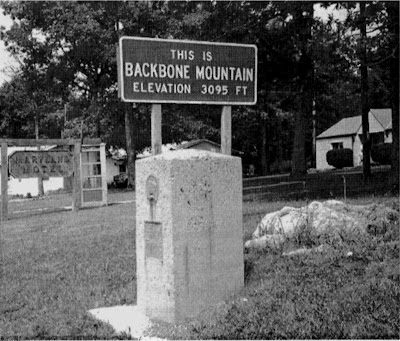 Today the motel seems to be closed. Backbone Mt. Pizza takes its place. 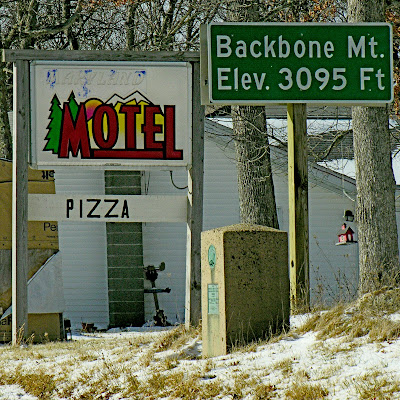 The brown sign saying "This is Backbone Mountain" has been replaced with a green one saying "Backbone Mt." The old sign is mounted on the roof of Backbone Mt. Sports. 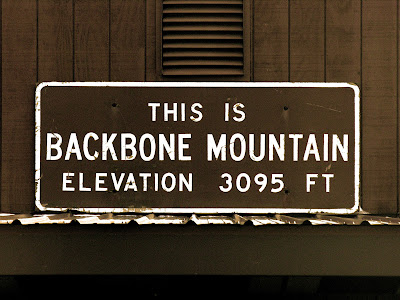 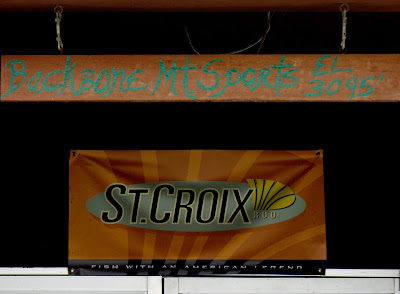 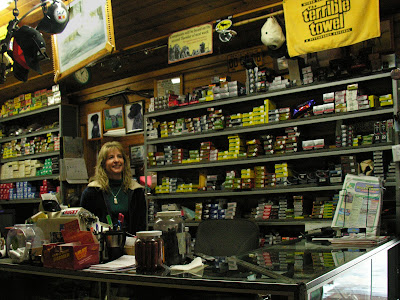 One paleontological specimen found inside Backbone Mt. Sports is a Sasquatch footprint cast. 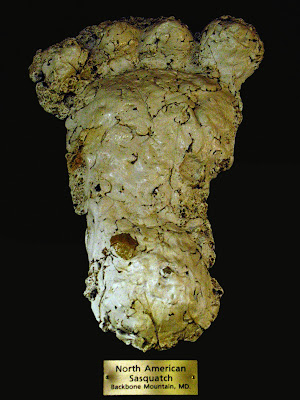