The North Point of the District of Columbia 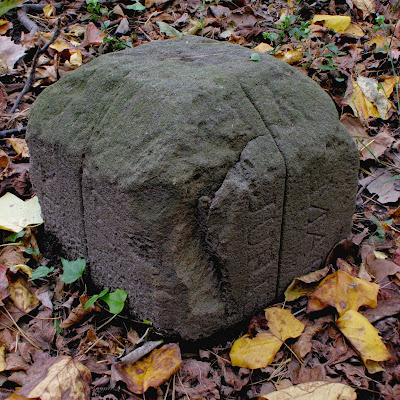 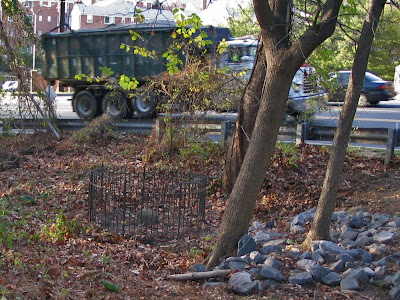 This sunken stone defining the north corner of the District of Columbia sits below the guard rail of East West Highway, MD 410, in Silver Spring. It is one of 38 surviving Aquia sandstone markers from the 1791-92 survey that laid out the boundaries of the new Federal District. The National Register form gives this description of the survey.


These markers pre-date the Nation's Capital itself, as they were erected at the time of the Federal City survey in 1791-92. ... The Federal Survey of 1791 of the newly designated Federal Capital Territory was commissioned by Secretary of State Thomas Jefferson in February 1791. The Survey, conducted by Major Andrew Ellicott with assistance from Benjamin Bannecker, was begun in February 1791 and completed in January 1793. When completed it represented the first official designation of the new Federal Capital and provided a basis for future city planning by Major Pierre Charles L'Enfant. 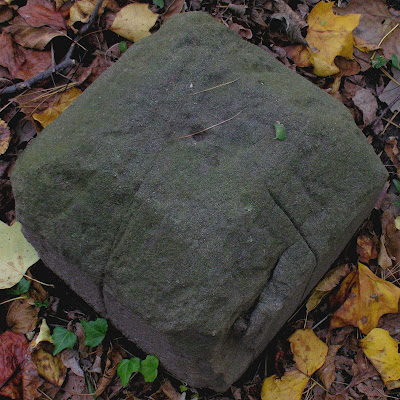 The dimple atop of the stone marks the North corner of DC's 10 mile square. The incised lines delineate the quarter of the stone that is in the District of Columbia and the three quarters that lie in Maryland.

In 1896, when Marcus Baker found this stone in a corn field "on the Fenwick place," it was already partially buried by the little branch that flows near it. As we can see from his photo, Baker dug out the lower part of the stone to make the inscriptions visible. 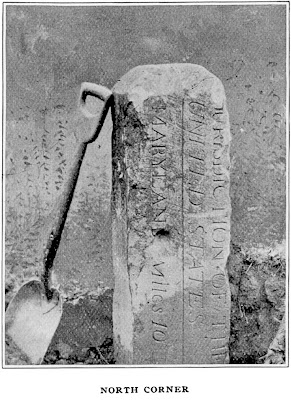 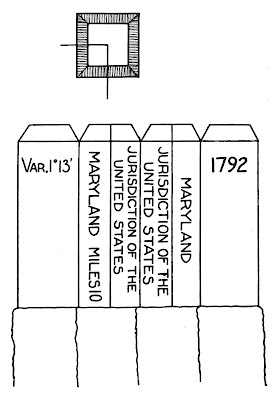 Woodward enhanced the inscriptions on his photo from his 1906 article "A Ramble Along the Boundary Stones of the District of Columbia with a Camera." 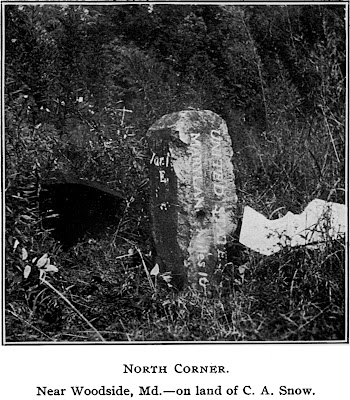 Fred Woodward was the book buyer for his family business, Woodward and Lothrop, who took it on himself to document the DC boundary stones.

The date "1792" is just visible on the nearly buried stone today, 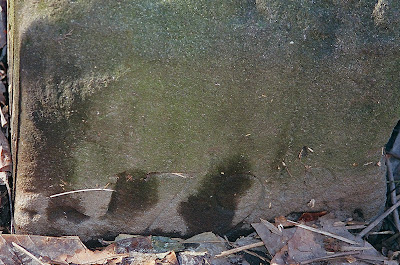 and the first few letters of "Jurisdiction" and "Maryland"﻿. 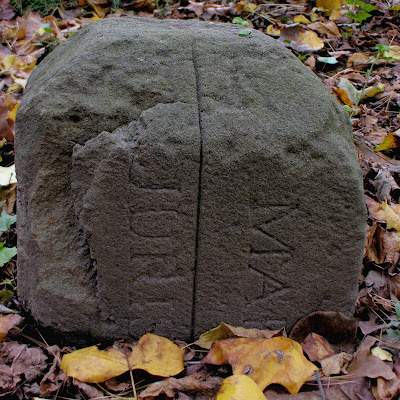 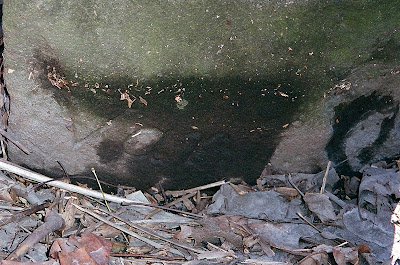 This map from the nearby Metro bus stop shows the stone's location at the north corner of the District. 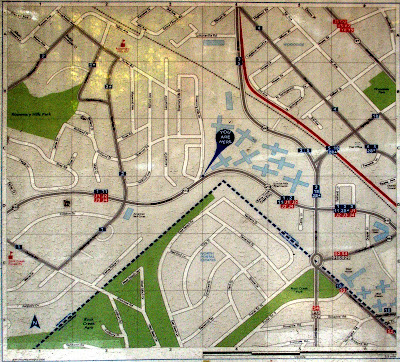 Between 1915 and 1925, the DAR took the DC boundary stones under their wing and put iron fences around each stone.  This Xerox copy of a photo belonging to the Columbia Historical Society shows a flag-waving DAR member at the dedication of the North Corner Stone in 1916. 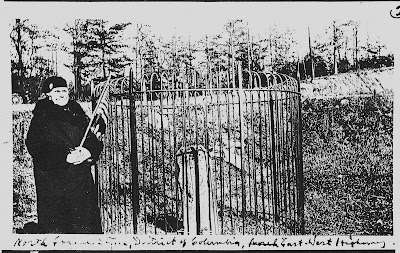 The fence is clearly visible in this photo from Caemmerer 1932. 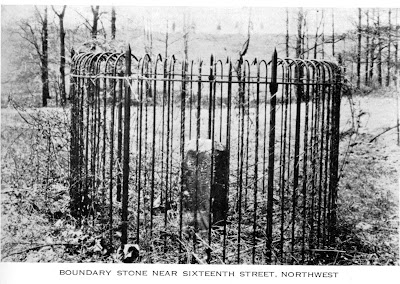 The DAR fences have labels identifying the Federal Boundary Stone, telling which chapter of the DAR presides over the stone,  and giving the date on which the fence was dedicated. 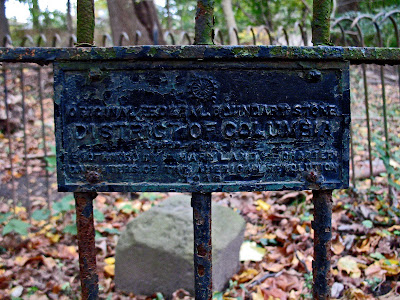 In 1949, Kenneth Lawrence described the North Corner Stone this way:

North Corner - this stone is located very close to the south side of the East-West highway, near Silver  Spring. It is leaning slightly and is in fair condition, but has badly battered edges. The circular fence which surrounds the stone is overgrown with vines, is rusting, and in need of paint

On Oct. 22, 2011, Stephen Powers from ASCE (American Association of Civil Engineers) organized the repainting of the fences of several DC boundary stones including the North Corner.  Here Steve squats inside the fence and points to Baker's photo of the North Corner Stone. 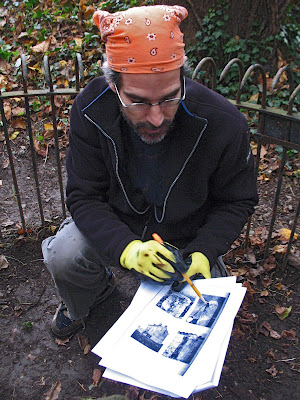 An article in the  Northwest Current by Carl Straumsheim recounts how Steve became the 21st century's Fred Woodward:

In 2005, Stephen Powers took his daughter to visit some of the 40 boundary stones marking the original border of the District. The occasion: a second-grade homework assignment about Arlington County. Surprised by the lack of upkeep, Powers went on to survey every stone, compiling notes about locations and conditions. More than 3,500 photos and several months later, he reached an overwhelming conclusion: The historic sites were falling into disrepair.

Carl even retells my anecdote about how I first stumbled on this boundary stone.

Like many Washingtonians, neighbor Allen Browne stumbled across the northernmost stone by accident. “I got stuck in traffic right here one day about 15 years ago, and I looked over to my right and saw this and thought, ‘That has to be the smallest cemetery I’ve ever seen!’” Browne said.

Becca Milfeld from Mount Vernon Estate took this video. Those yellow gloved hands visible at about the 2:00 minute mark brushing green rustoleum over the brown primer are mine.


That's Tim Summerville of DCALS (DC Association of Land Surveyors) sitting on the stone while the final coat of green paint is applied. 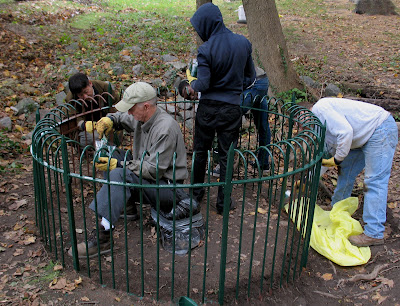 And here I am in this photo taken by Wei Zhang, a civil engineer, visible on the left in the photo above. 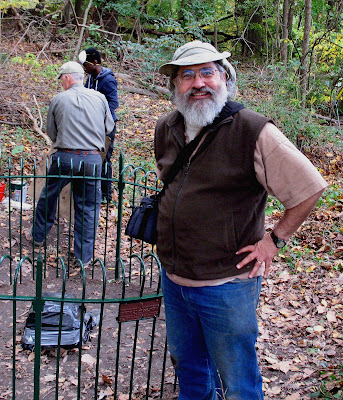 The DAR plaque is now highlighted by leaving it in brown primer while the rest of the fence has a green outer coat. 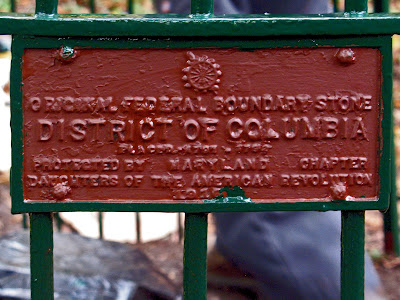 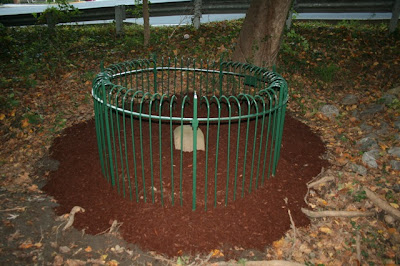