On the Road to Washington 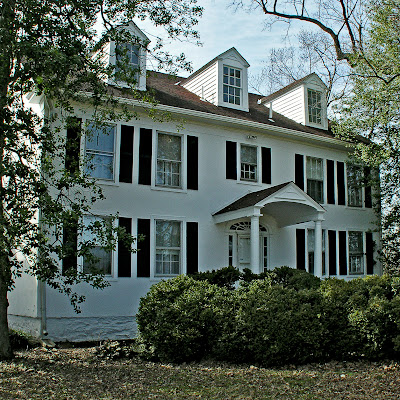 Confederate General Jubal Early made his headquarters in this house on a hill on the way to Washington on July 10, 1864. It was the home of John T. DeSellum and his sister Sarah Ann.  The DeSellums exemplify the position of Maryland in the Civil War in that they were slave holders but were die-hard unionists as well. This position led to a dinner table confrontation between one of Early's officers and John DeSellum.  He remembered the violation of decorum this way:


Early and staff sat down to the table. A conversation commenced about the war and its cause. They saw I was a slave holder, and my remarks about John Brown's raid suddenly caused a Colonel Lee to abruptly demand of me "whether I was for coercing the south!" As I did not intend to lie or act the coward, my reply was "I wanted the south whipped back under the Constitution, union, and government of the United States - with the rights and privileges she had before the war." Again abruptly, Lee in a rage told me, "You are an abolitionist - it is no use to blame the devil and do the devil's work" and was very insulting. ... Gen. Arnold Elsey arose from the table with the dignity and politeness of a gentleman stated his reasons for joining the Southern Confederacy,  his polished manner was an indirect reproof for Lee's violation of common politeness in the presence of my sister.

This remembrance cannot be exactly accurate. Historians agree that neither of Robert E. Lee's sons were with Early's command and that Marylander Arnold Elzey was in Richmond on July  10, 1864.  The Confederates took the Desellums' livestock, crops and fence and, in response to DeSellum's complaint, left them two barrels of corn. Sarah DeSellum hid $3,000 under her skirts. 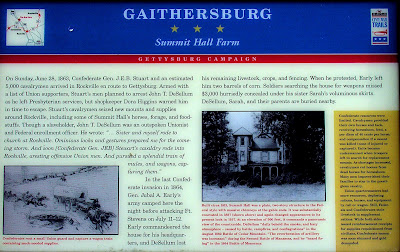 A year earlier, as this Civil War Trails marker says, J. E. B. Stuart's cavalry passed along the Frederick Road -- now MD 355 -- on the way to the Battle of Gettysburg. They had a list of Union men to arrest. John DeSellem, who had been the Enrollment Officer for the Union draft, was on that list but escaped capture. He wrote that "Sister and myself rode to church at Rockville. Ominous looks and gestures prepared me for the coming storm. And soon Stewart's cavalry rode into Rockville, arresting offensive Union men. And pursued a splendid train of mules, and wagons, capturing them." Capturing this wagon train cost Stuart valuable time making him arrive late to the Battle of Gettysburg which perhaps caused the Lee to lose the battle by depriving him of his "eyes and ears" at the crucial time.

John and Sarah DeSellum are buried in the family cemetery at Summit Hall Farm along with their parents, James and Catherine. Notice that the spelling of their name varies to the point that the sign says "DeSellum Family Cemetery" but the epitaphs on the headstones say "DeSellem." 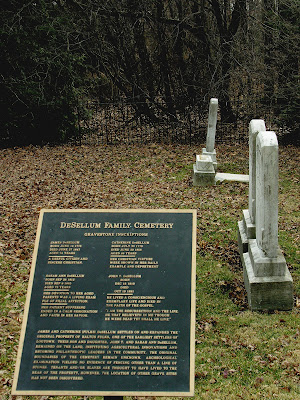 When I visited, Sarah's headstone had fallen, or been knocked, over. 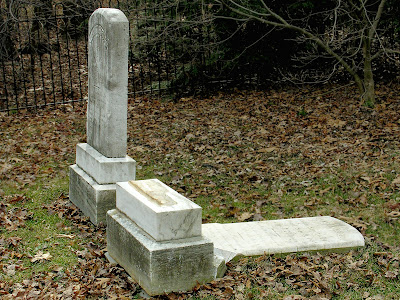 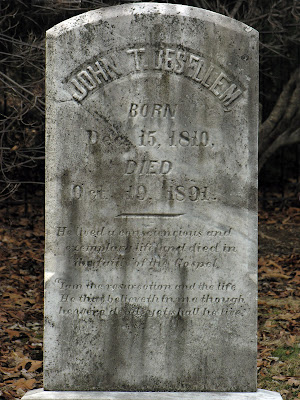 “I am the resurection and the life
He that believeth in me though
he were dead yet shall he live.” 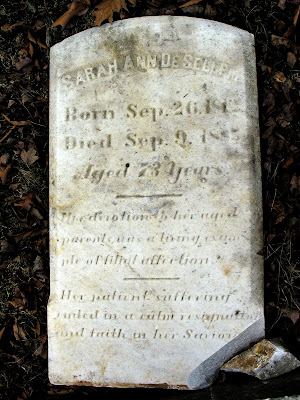 The sign at the cemetery explains some of the history of this place.

James and Cathrine (Fulks) DeSellum settled on and expanded the original property of Baltus Fulks, one of the earliest settlers of Logtown. Their son and daughter, John T. and Sarah Ann DeSellum, remained on the land, instituting agricultural innovations and becoming philanthropic leaders in the community. The original boundaries of the cemetery remain unknown. Archaeological examination yielded no evidence of fencing other than a line of stones. Tenants and/or slaves are thought to have lived in the rear of the property, however, the location of other grave sites has not been discovered.

This historical marker tells the history of Summit Hall Farm. 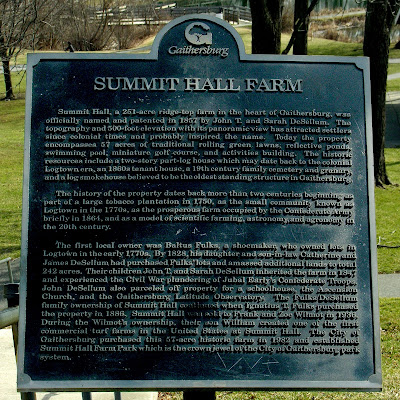 Summit Hall, a 251-acre ridge top farm in the heart of Gaithersburg, was officially named and patented in 1857 by John T. and Sarah DeSellum. The topography and 500 foot elevation with its panoramic view has attracted settlers since colonial times and probably inspired the name. Today the property encompasses 57 acres of traditional rolling green lawns, reflective ponds, swimming pool, miniature golf course, and activities building. The historic resources include a two-story part-log house which may date back to the colonial logtown era, an 1860s tenant house, a 19th century cemetery and granary, and a log smokehouse believed to be the oldest standing structure in Gaithersburg.
The history of the property dates back more than two centuries beginning as a part of a large tobacco plantation in 1750, as a small community known as Logtown in 1770s, as a prosperous farm occupied by the Confederate Army briefly in 1864, and a model of scientific farming, astronomy, and agronomy in the 20th century.
The first local owner was Baltus Fulks, a shoemaker, who owned lots in Logtown in the early 1770s. By 1828, his daughter and son in law Catherine and James DeSellum had purchased Fulks' lots and amassed additional lands to total 242 acres. Their children John T. and Sarah DeSellum inherited the farm in 1847 and experienced the Civil War plundering of Jubal Eary's Confederate Troops. John DeSellum also parceled off property for a schoolhouse, the Ascension Church and the Gaithersburg Latitude Observatory. The Fulks/Desellum family ownership of Summit Hall continued when Ignatius T. Fulks purchased the property in 1886. Summit Hall was sold to Frank and Zoe Wilmot in 1936. During Wilmot's ownership, their son William created one of the first commercial turf farms in the United States at Summit Hall. The City of Gaithersburg purchased this 57-acres historic farm in 1982 and established Summit Hall Farm Park which the crown jewel of the City of Gaithersburg park system.﻿

The farm house may date from around 1812. In its original instantiation, it was a Federal style house that looked like this 1989 drawing from Anne Cissel: 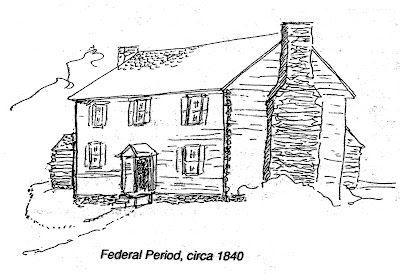 And it probably looked like that in 1864 as well. In 1887 after John DeSellem sold the property to his cousin Thomas Fulks, it was updated to reflect Victorian tastes, as this photo from the Civil War Trails sign shows. John Desellem continued to live in one room of the house until he died in 1891. 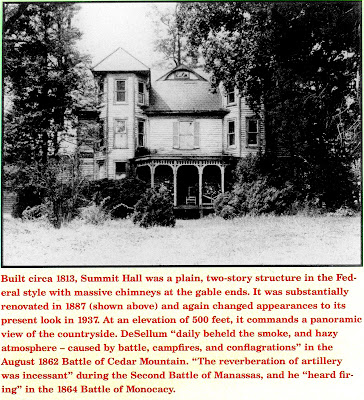 This granary barn was built around that time. 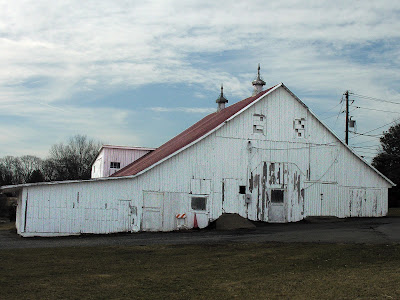 In 1936, Frank Wilmot bought Summit Hall Farm and restored the house in 1937 to something like its original appearance. 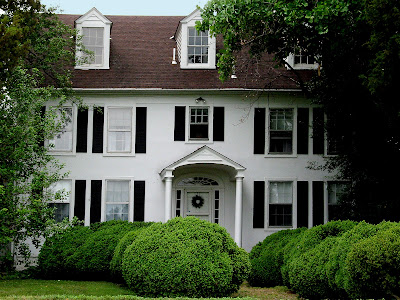 The farm became a Gaithersburg park in 1982. In 1998, it was renamed Bohrer Park after W. Ed Bohrer, former Mayor of Gaithersburg.

Frank Wilmot's sister, Frances Wilmot Kellerman, and her husband, Gladdin Kellerman, are life tenants in the old house. Mrs. Kellerman joked that taking her picture might break my camera. Here she's standing in front of the old log smokehouse claimed to be the oldest building in Gaithersburg. 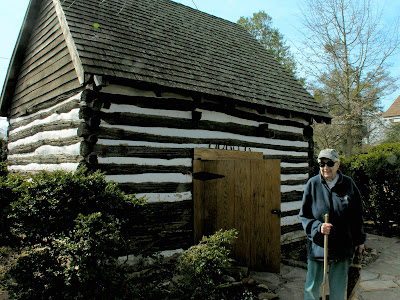 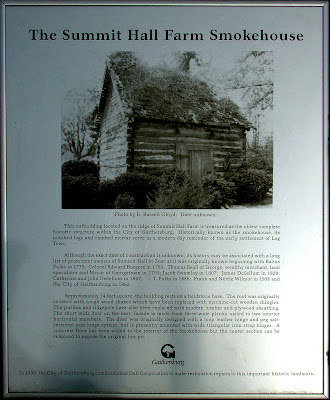 This outbuilding located on the ridge of Summit Hall Farm is treasured as the oldest complete historic structure within the City of Gaithersburg. Historically known as the smokehouse, its notched logs and chinked mortar serve as a modern day reminder of the early settlement of Log Town.
Although the exact date of construction is unknown, its history may be associated with a long list of prominent owners of Summit Hall or Zoar as it was originally known beginning with Baltus Fulks in 1773; Colonel Edward Burgess in 1783; Thomas Beall of George, wealthy merchant, land speculator and Mayor of Georgetown in 1799; Jacob Swamky in 1807; James DeSellum in 1828; Catherine and John DeSellum in 1847; I. T. Fulks in 1886; Frank and Nettie Wilmot in 1936 and the City of Gaithersburg in 1982.
Approximately 14 feet square, the building rests on a fieldstone base. The roof was orginally covered with rough wood shakes which have been replaced with machine cut wooden shingles.  The purlins and ridgepole have also been replaced with modern lumber and plywood sheathing. The short wide door on the east facade is made from three wide planks nailed to two interior horizontal members. The door was originally designed with a loop leather hinge and peg salt-resistent iron hinge system, but is presently mounted with wide triangular iron strap hinges. A concrete floor has been added to the interior of the Smokehouse but the center section can be removed to expose the original fire pit.

Bohrer Park today includes a wide variety of activities including a water park, minature golf and a skate-board park. 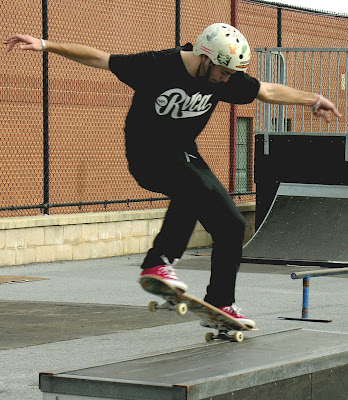 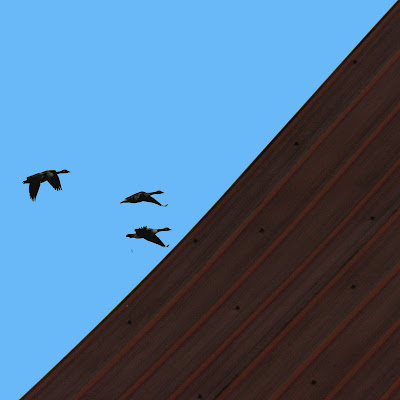