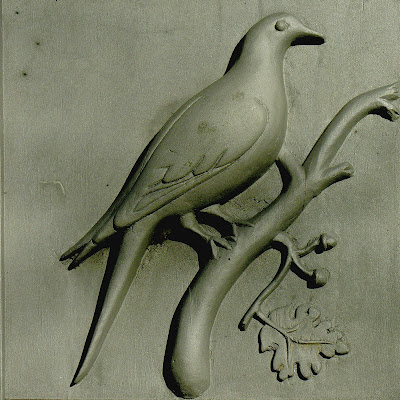 A Monument to the Passenger Pigeon near Hanover, Pennsylvania

Martha died at 1:00 p.m. on  Sept. 1, 1914. She was the last Passenger Pigeon. Her species, Ectopistes migratorius, died with her. In 1947, Pennsylvania Boy Scouts erected a monument to this extinct species. This monument overlooking Lake Marburg in Codorus State Park is its successor. 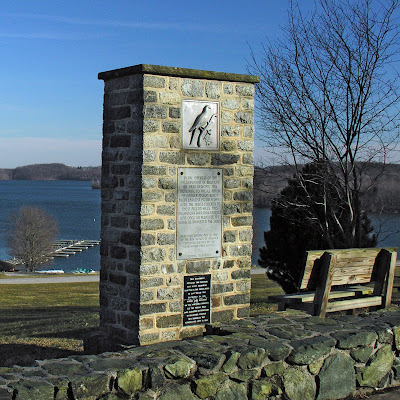 Martha had been raised in captivity, born -- or rather hatched -- and raised at the Cincinnati Zoo. She was 29 years old when they found her dead in the bottom of her cage on that September afternoon. Her body was immediately frozen and shipped to the Smithsonian where it was preserved and displayed. In 2012 Martha was in the Smithsonian collections but not on public display. This photo of Martha in a glass case in the Smithsonian appeared in Life Magazine in 1961. 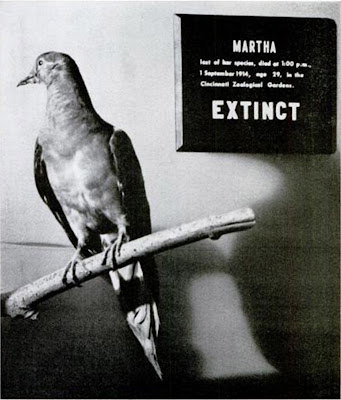 MARTHA
Last of her species, died at 1 p.m.,
1 September 1914, age 29, in the
Cincinnati Zoological Garden.
EXTINCT

Martha was returned to public display in 2014 in celebration of the 100th anniversary of her death.

On March 24, 1900, on a farm near in South Central Ohio's Pike County, a 14 year old boy named Press Clay Southworth (no kidding) saw a bird eating their corn. He got permission from his mother to use their 12-gauge shotgun to shoot the bird, and when he went outside he found it up in a tree.
After the boy had shot and killed the bird he took it to show his Mother.  When his mother saw it she knew that it was a Passenger Pigeon.  This bird, who is named Buttons, is now on display at the Ohio Historical Society in Columbus, Ohio.

Here's a photo of Buttons in Columbus from the Ohio Historical Society Collections.

Martha and Buttons are understandably not at their best. Passenger pigeons were handsome birds larger than our city pigeons and more colorful. Audubon captured what they looked like alive although he worked from dead models. 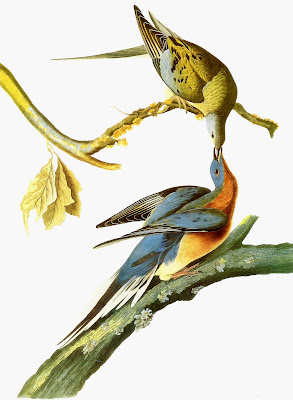 Passenger Pigeons were not only beautiful and reportedly delicious, they were unimaginably numerous. There may have been three to five billion of them at European settlement. They migrated and roosted in huge flocks that tracked the mast years of  beechnuts and acorns. Wilson reported seeing a flock that he calculated contained 2,230,272,000 pigeons. "An inconceivable multitude, and yet probably far below the actual amount," he said. These flocks would darken the sky for days at a time as they flew over. Towns would have "pigeon years" when one of these gigantic flocks appeared and were hunted in proportionally large numbers, and often baked into pigeon pies. They were taken in outlandish numbers by market hunters in the late 19th century who shipped them by rail to be eaten in the big coastal cities, perhaps as Ballotines of Squabs Á La Madison -- recipe here. Jennifer Price traces the meaning of the pigeon's transition from pie filling to Ballotines in her book Flight Maps. 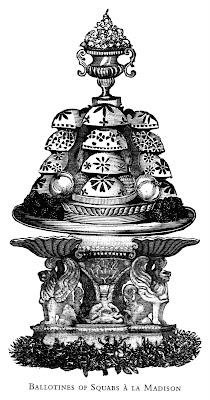 In 1857, Ohio considered a law to protect Passenger Pigeons. A report of a select committee of the Ohio Senate said that:


The passenger pigeon needs no protection. Wonderfully prolific, having the vast forests of the North as its breeding grounds, traveling hundreds of miles in search of food, it is here to-day and elsewhere to-morrow, and no ordinary destruction can lessen them, or be missed from the myriads that are yearly produced.

A hundred years ago, William Hornaday used that quote on the frontispiece of his book Our Vanishing Wildlife along with a photo of Martha who was alive in 1912. 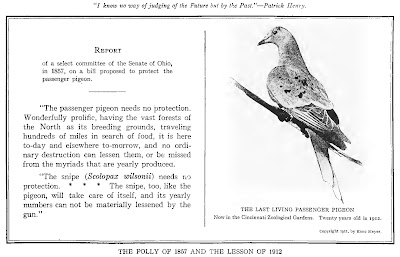 The pigeon monument near Hanover Pennsylvania was originally located in an area known as the the Pigeon Hills, north of its present location. It was destroyed, by housing development I suppose, in 1981 and rededicated in Codorus State Park. 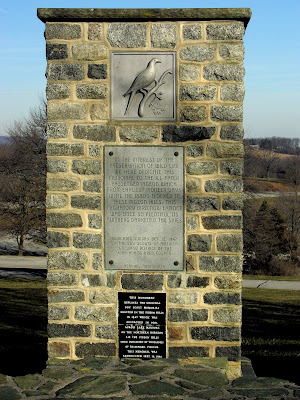 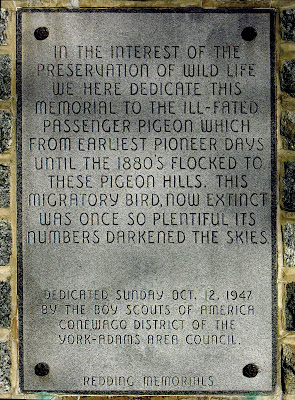 ﻿ In the interest of the
preservation of wild life
we here dedicate this
memorial to the ill-fated
passenger pigeon which
from earliest pioneer days
until the 1880's flocked to
these Pigeon Hills. This
migratory bird, now extinct
was once so plentiful its
numbers darkened the skies.

Dedicated Sunday Oct. 12, 1947
By The Boy Scouts of America
Conewago District of the
York-Adams Area Council 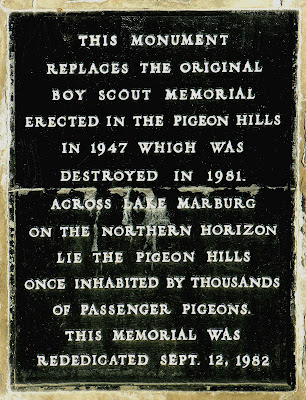 This monument
replaces the original
Boy Scout Memorial
erected in the Pigeon Hills
in 1947 which was
destroyed in 1981.
Across Lake Marburg
on the Northern horizon
lie the Pigeon Hills
once inhabited by thousands
of Passenger Pigeons.
This memorial was
rededicated Sept. 12, 1982

A sign in the parking lot repeats the text on the stone monument. 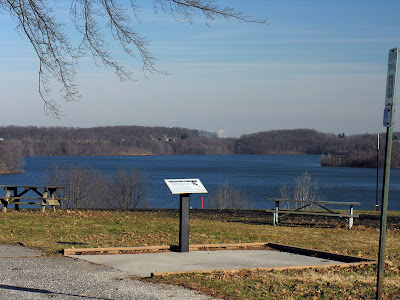 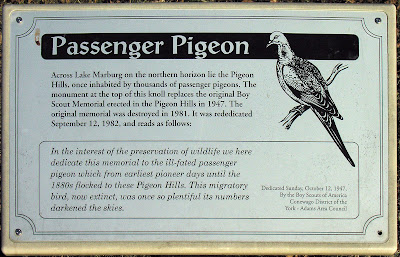 ﻿Aldo Leopold wrote in 1947 on the occasion of the dedication of a similar monument in Wisconsin that: