Mary Hall: The Madam on the Mall 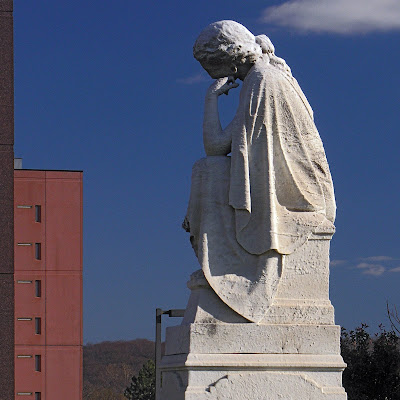 This contemplative figure sits on top of Miss Hall's monument in the Congressional Cemetery. 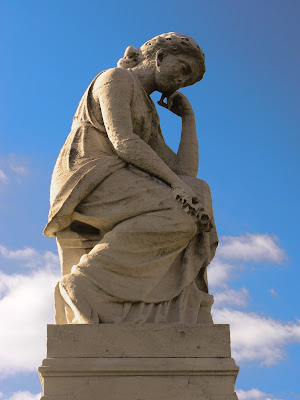 She kept her establishment at 349 Maryland Avenue, about three blocks from the Capitol, from 1840 until she retired in 1876. When she died of a cerebral hemorrhage in 1886, her estate was worth more than 87,000 dollars, the equivalent of about two million today. 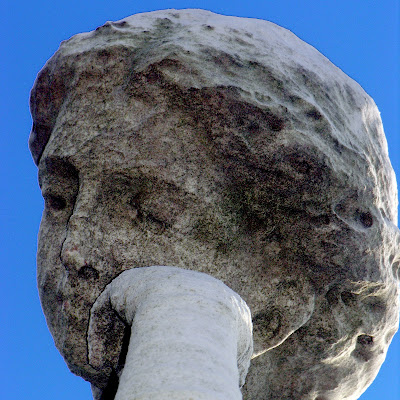 The Provost Marshal's Office list of bawdy houses for 1864-65 listed 73 houses and an additional 12 "colored" bawdy houses, along with their addresses, classes (1, 2, 3 and low), and the numbers of "inmates."  Mary Hall's at 349 Maryland Avenue, Island, was class 1 and had 18 inmates, more than any other house. The address at Maryland Avenue and 4½ Street was in a part of the city called the Island which was bounded by the Washington City Canal and the river. The alley behind Miss Hall's house had the colorful name of "Louse Alley."  This modified detail from Sanborn's 1888 Fire Insurance map of Washington shows Reservation C bounded by Maine Avenue Maryland Avenue 4½ Street and 3rd Street.  349 Maryland Avenue is in the lower left corner. 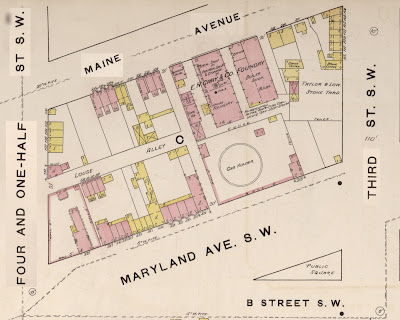 Mary Hall's house is visible behind the Capitol on the mall in this 1852 lithograph "View of Washington" by E. Sachse & Co. 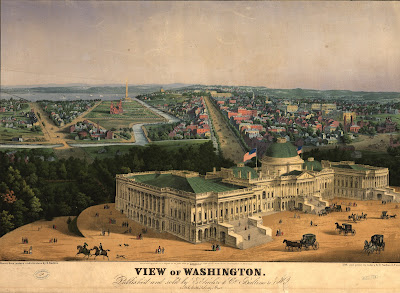 I've labeled the house in this detail of the mall. Notice the Smithsonian Castle, the proposed design of the Washington Monument, the Naval Observatory, and the Washington City Canal. Mary Hall's house is at the left in the extreme detail. (That round building in the forground was the storage tank for the Washington Gas Light Company's 1851 gas plant.) 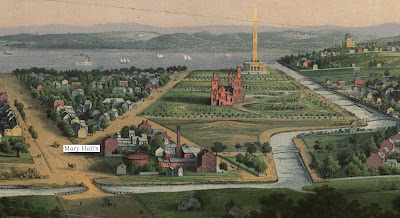 Mary Hall's proximity to the Capitol and its upscale clientele led to its being considered "the Congressmen's Whorehouse."  Lobbyists may have used this establishment to entertain lawmakers as illustrated in this picture from James William Buel's 1883 book,  Mysteries and Miseries of America's Great Cities. 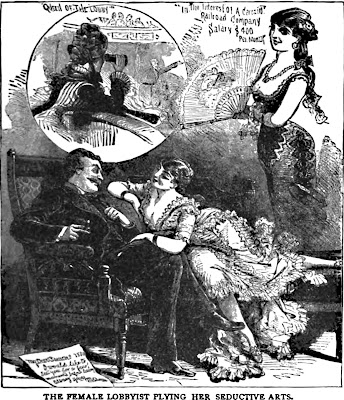 Some of the inmates at Mary Hall's during the Civil War were southern sympathizers. The Evening Star on March 16, 1863, contained this report of three fallen angels.

Annie Smith, Alice Martin, and Cora Wilbraham, three fallen angels, sojourning at Mary Hall's hades, yesterday secured a barouche and driver for the purpose of taking an airing, and in order to keep their spirits up, they stopped at sundry restaurants and put the spirits down to such an extent that they imagined themselves in Dixie, and commenced shouting for Jeff. Davis and singing the Bonnie Blue Flag. At the corner of seventh street and the Avenue a mounted Provost Guard ordered a halt, and attempted to arrest the trio, when one of them jumped out of the hack, but was persuaded to get back, and the party were then escorted to the Provost Marshal's office, where Annie Smith and Alice Martin again allowed their secesh proclivities to stick out, and continued to hurrah for Jeff. and rebellion. Cora Wilbraham, however, being somewhat sober, was more quiet, and endeavored to dissuade her companions from being so disorderly. The whole party was sent to the Central Guardhouse, and were subsequently released upon the payment of a fine.

This view down Louse Alley toward the Capitol was published in 1909 by Weller and Weller. 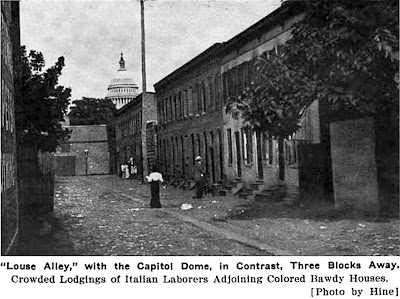 Today, 349 Maryland Avenue is the site of the Smithsonian's Museum of the American Indian. The Smithsonian page describing the Archaeology of the site says:


The first substantial dwelling in Reservation C was a large, three-story, brick dwelling erected in Lot 12 by Mary Ann Hall. According to census records, Hall was a single woman who was in her early twenties at the time she built this large dwelling. The 1840 census indicated that she lived in the house with four other women who were also in their twenties, a free black woman in her late twenties or early thirties, and a black male between the ages of 10 and 24 who was a slave. Although it is not stated in the census, later documentation verifies that Mary Ann Hall was a prostitute, and her large house was a brothel.

This striking building of Kasota dolomitic limestone was designed by Douglas Cardinal, a Blackfoot indian from Ottowa. This view of the south facade represents my guess as to the location of Mary Hall's house. 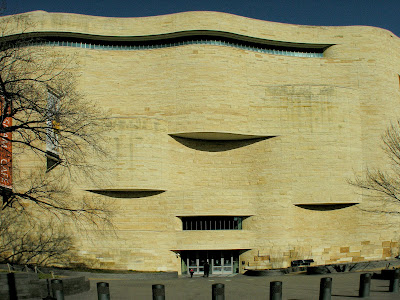 Mary Hall's mother, Elizabeth, who died in 1864 and her sister, Catherine, who died in 1867 were buried in the family plot in Congressional Cemetery with a monument surmounted by a triumphant Angel. 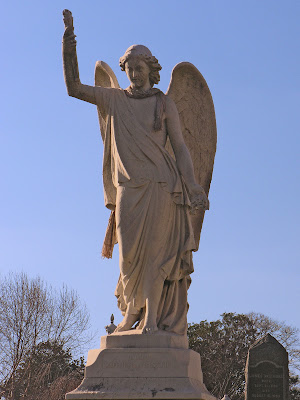 The epitaph on this monument is quite simple. 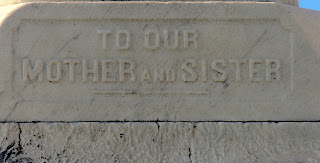 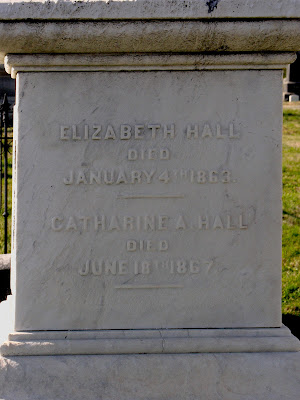 TO OUR
MOTHER AND SISTER

For some unknown but surely plangent reason, a long silk scarf has been wrapped around the neck of the angel. It has developed a white patina that almost matches the original marble but is more visible as it drapes out under the angel's wings. 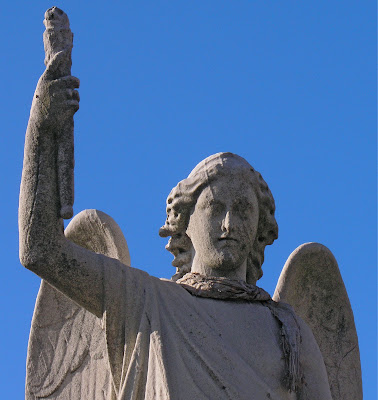 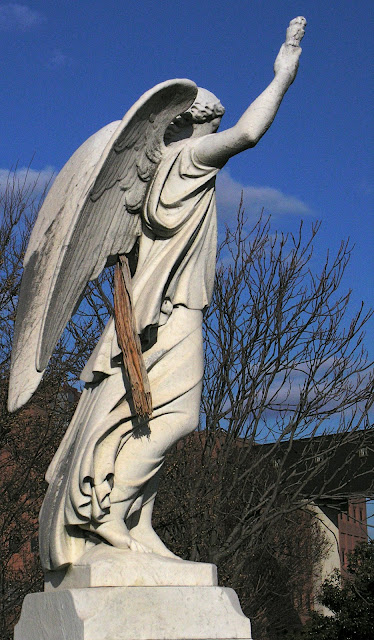 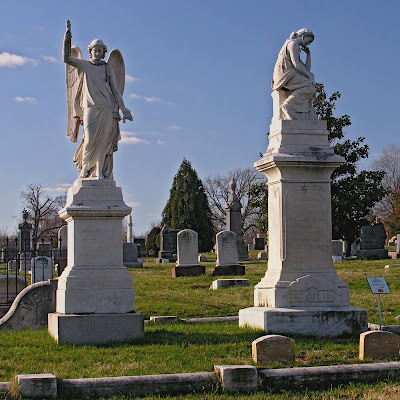 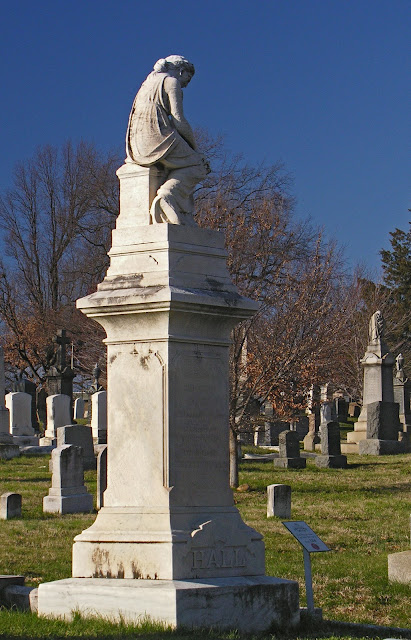 The name of Mary's younger sister Elizabeth, "Lizzy," who died in 1898 has been added to the monument. It is believed that Lizzy Hall was also a prostitute in the house at 349 Maryland Avenue. 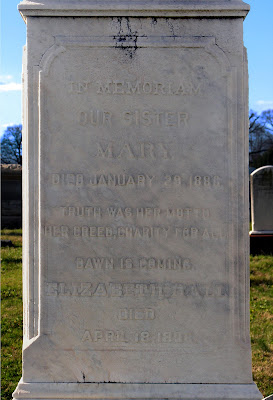 TRUTH WAS HER MOTTO
HER CREED, CHARITY FOR ALL
DAWN IS COMING 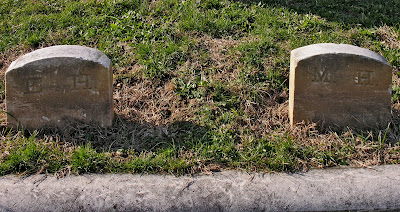 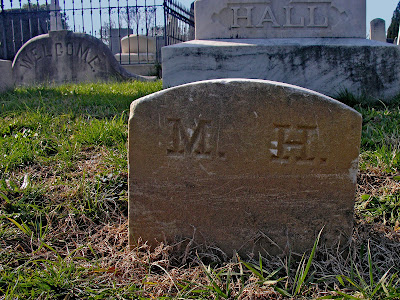 This marble sign welcomes visitors to the Hall family plot: 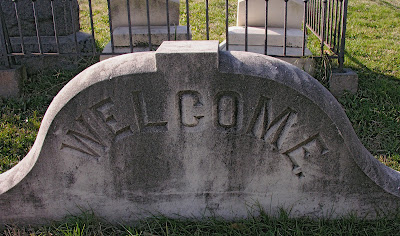 The Congressional Cemetery Cell Phone Tour entry for Mary Hall's Grave is available at 202-747-3474, extension 23#. Docent Elizabeth Jones describes the life of this "leading entertainment entrepreneur" and reveals that Mary Hall owned more plots in Congressional Cemetery than anyone else. In addition to her family plot, she bought plots for nine unrelated men. 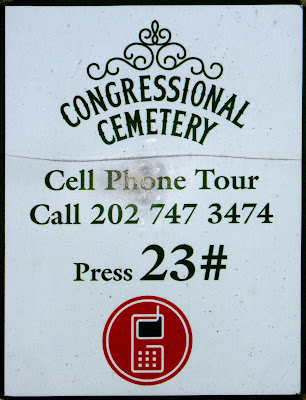 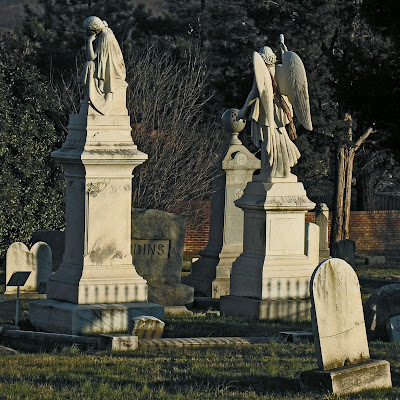 Mary Hall's obituary in the Evening Star emphasized her generosity:


Departed this life at 2 a.m., Friday January 29, 1886, Mary F. Hall, long a resident of Washington. With integrity unquestioned, a heart ever open to appeals of distress, a charity that was boundless, she is gone but her memory will be kept green by many who knew her sterling worth. Funeral strictly private.