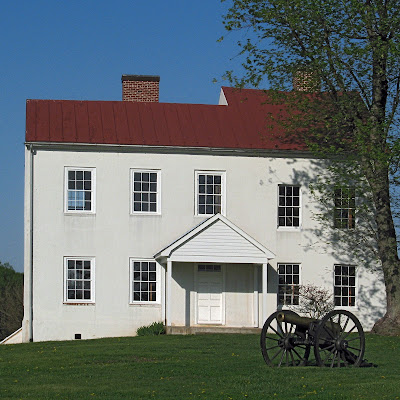 Here, where the Rockville Pike, MD 355, crosses the Monocacy River, the Vincendière family practiced a particularly cruel brand of slavery they brought with them from St. Domingue. They fled St. Domingue in 1793 to avoid the slave rebellion, an offshoot of the French Revolution that enveloped the French colony and would  lead in 1804 to the establishment of the Republic of Haiti. 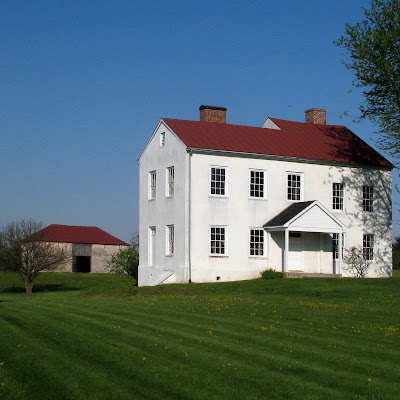 In 1794, they began building a plantation of 748 acres on the banks of the Monocacy; they called it L'Hermitage. The plantation became a haven for refugees from St. Domingue. The complex relationships between the various people who lived here has spawned much historical interest.  A recent Washington Post article turns to Joy Beasley for this summary.


The household consisted of Marguerite Mangan de la Vincendière, several of her children, and a man who may have been her husband's cousin, Jean Payan de Boisneuf. The family patriarch, Etienne Bellumeau de la Vincendière, never joined his relatives in Maryland, opting, for unknown reasons, to relocate to Charleston, S.C., according to [Joy] Beasley and a study of the site she edited.

Teenaged Victoire Vincendière became the head of the household and the plantation. She was 16 when she immigrated in 1793. This photo from the cover a Maryland Historical Magazine does not identify these French refugees who are playing cards on the banks of the Monocacy. 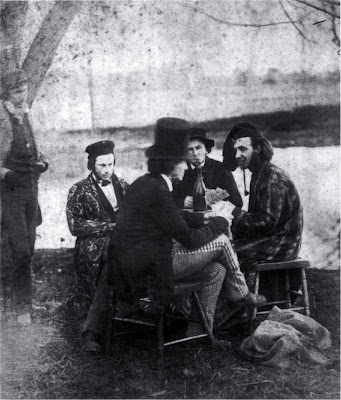 The Vincendières owned around 90 slaves by 1800, making them one of the largest slave owners in Frederick County. It is speculated that they must have been dealing in slaves or renting them out to local industries. They treated their human chattels particularly badly. The NPS pamphlet on the Best Farm repeats the remarks of a Polish diplomat named Julian Niemcewicz who passed by here on June 15,1798.


Four miles from the town [Frederick] we forded the river [Monocacy]. On its banks one can see a row of wooden houses and one stone house with the upper storeys painted white. This is the residence of a Frenchman called Payant [Jean Payen de Boisneuf; a distant relative who resided with the Vincendières], who left San Domingo with a substantial sum and with it bought . .. a few hundred negroes whom he treats with the greatest tyranny. One can see on the home farm instruments of torture, stocks, wooden horses, whips, etc. Two or three negroes crippled with torture have brought legal action against him, but the matter has not yet been settled. This man is 60 years old, without children or relatives; he keeps an old French woman [Magnan Vincendière] with two daughters; she, in sweetness of humour, even surpasses him. This charming group has caused about 50 legal actions to be brought. They foam with rage, beat the negroes, complain and fight with each other. In these ways does this man use his wealth, and comforts his life in its descent toward the grave.

One of the Vincendière daughters, Victoire, was charged with beating her slave, Jenny, according to court records...

[I]n 1797 Boisneuf was found guilty of "not sufficiently clothing and feeding his negroes," and of beating a slave named Shadrack.

Keeping large numbers of slaves and treating them cruelly may represent the cultural importation of French Planter culture from St. Domingue. The striking French style stone barn at L'Hermitage reflects imported cultural influences as well. It lies outside the German influenced architectural traditions of central Maryland. 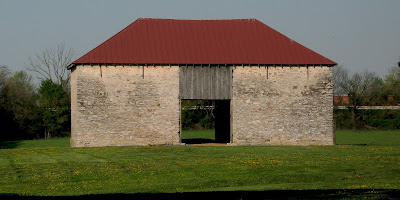 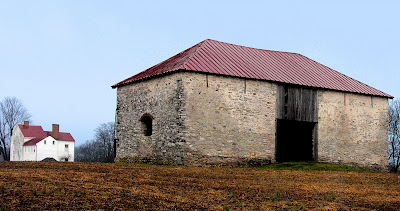 The main house has evolved since it was built in 1794. This altered photo by Paula Stoner Reed shows what the house looked like in the Vincendières' time, with a hipped roof on the south wing and a lean-to roof on the north addition. Victoire Vincendière enlarged the house to its present condition with a gabled roof spaning both wings just before selling it in the late 1820's. 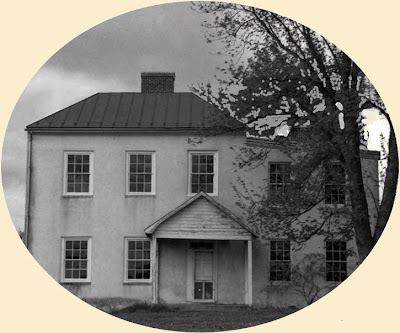 This small satellite building was also built by the Vincendières in 1794. It is likely the "stone house with the upper storeys painted white" noticed by Niemcewicz.  It originally had two doors and a porch facing the main house. 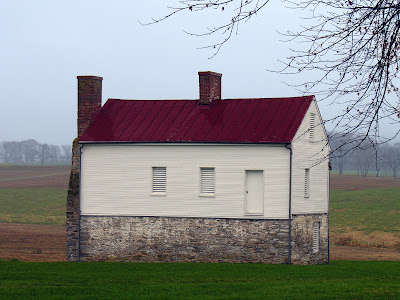 In a video available from C-Span, Joy Beasley describes how Niemcewicz' description of a "row of wooden houses" led to the archaeological discovery of six slave houses along the road in front of the main and secondary houses at Best Farm probably also built around 1794.

Victoire Vincendière sold L'Hermitage in 1827. In 1828, the B&O railroad tracks were run along the Monocacy and bisected the property. In 1829, a wooden bridge was built to carry the Urbana Pike (today's MD 355) over the Monocacy. In 1831, a railroad spur was built to Frederick creating a triangular intersection known as Monocacy Junction, and a railroad bridge over the river.  As the NPS put it, "These improvements made the Monocacy area strategically important during the Civil War."

The farm became the property of the Trail family in 1852. The Best family leased the farm from about 1830 onward. On the eve of the Civil War, David Best worked 375 acres with his wife, four children and seven slaves. When David Best retired in 1864, John and Margaret Best took over the farm. 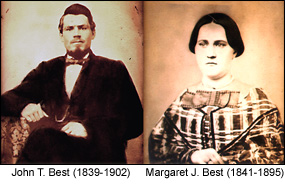 Beneath this Very Mall: The Lost Order

In 1862, the Confederate army camped here on the Best Farm. A while later on September 13, the 27th Indiana Infantry camped here and discovered an order from Robert E. Lee wrapped around three cigars. Order 191 outlined Lee's strategy for his second invasion of the north. It was transmitted to Union General George B. McClellan. With Lee's plans in hand, McClellan immediately went on the offensive. He caught up with Lee as the Confederate army was about to re-cross the Potomac at Sharpburg, and the Battle of Antietam ensued. Little is definitely known about the "Lost Order" incident, but the way I heard it, the order was found in a grove of trees on the Best farm in an area now occupied by the Francis Scott Key Mall. 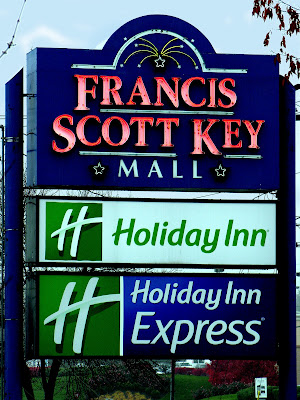 The Battle of Monocacy

Two years later in 1864 Early's Confederate corps pulled out of the trenches at Petersburg and took a circuitous route north, crossing the Potomac near Sharpsburg and moved east to Frederick, Maryland. After brief skirmishing in Frederick, the town was ransomed for $200,000. Meanwhile, Union General Lew Wallace, who would later become famous for his novel "Ben Hur," hastily took his troops from Baltimore to Monocacy Junction. On July 9, Early's Confederates clashed with Wallace's Union forces at the Battle of Monocacy. The battle opened on the Best Farm. This NPS marker tells the story. 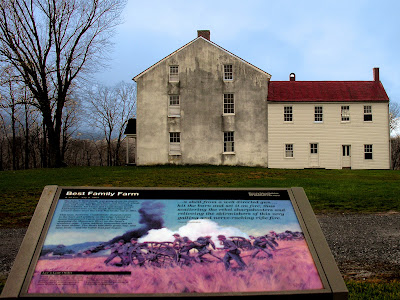 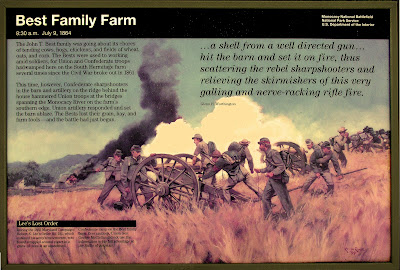 Best Family Farm
8:30 a.m. July 9, 1864
The John T. Best family was going about its chores of tending cows, hogs, chickens, and fields of wheat, oats, and corn. The Bests were used to working amid soldiers, for Union and Confederate troops had camped here on the South Hermitage farm several times since the Civil War broke out in 1861.

This time, however, Confederate sharpshooters in the barn and artillery on the ridge behind the house hammered Union troops at the bridges spanning the Monocacy River on the farm's southern edge. Union artillery responded and set the barn ablaze. The Bests lost their grain, hay and farm tools - and the battle had just begun.

The background image on the NPS marker is a 1999 Keith Rocco painting, Confederate Battery at the Best Farm Monocacy, Maryland, 1864. 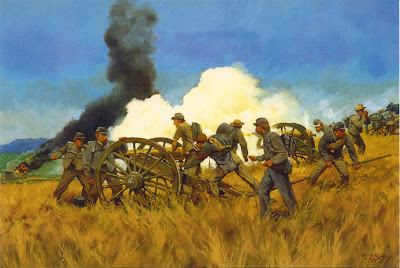 Wallace managed to hold up the Confederate advance for a full day before Early's cavalry managed to flank Wallace's men. This watery detail from a sign at Gambrill's Mill shows the Confederates attacking over the Best Farm and the flank attack over the Worthington Farm. 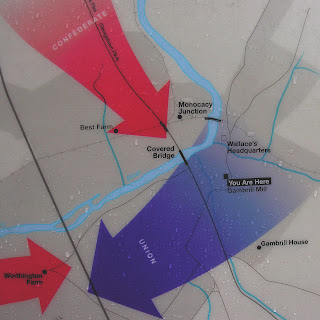 Wallace's command retreated down the National Road to Baltimore and the next day, Early marched toward Washington and the battle of Fort Stevens, stopping at Gaithersburg on the way. The delay at Monocacy gave time for the 9th corps to move into Washington in time to prevent the Capture of the Union Capital.
﻿﻿

﻿﻿As Early was making this last-ditch effort to turn the war in favor of the Confederacy, the Maryland Constitutional Convention of 1864 was meeting in Annapolis, hashing out the new Constitution that would free the slaves of Maryland. The convention completed their work in September 1864. The new Constitution and the end of slavery in Maryland took effect on November 1, 1864 after an October referendum for which Lew Wallace took credit in his autobiography. With a wink and nod from Lincoln, he used Union troops to intimidate Southern sympathizers and keep them from voting. That was eleven months after the Emancipation Proclamation freed the slaves in the rebellious states.

The Best Farm became part of the Monocacy National Battlefield when the NPS bought it in 1993 from the Trail family. Preservation of the site of the Battle of Monocacy also resulted in the preservation of L'Hermitage with its powerful evocation of the cruelty of slavery.