Where the Potomac Begins 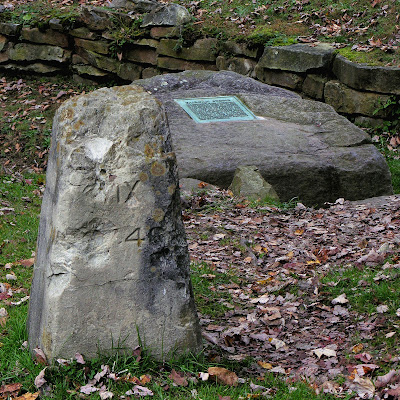 The original 1746 Fairfax Stone marking the headspring of the Potomac is long gone. These two monuments from 1910 and 1957 mark the spot. The bronze plaque on the large boulder summarizes the history and importance of this location. 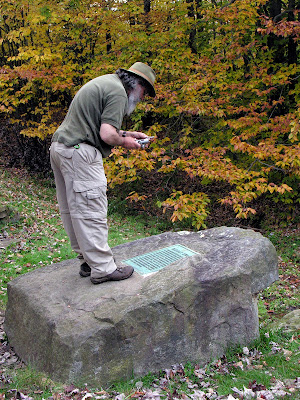 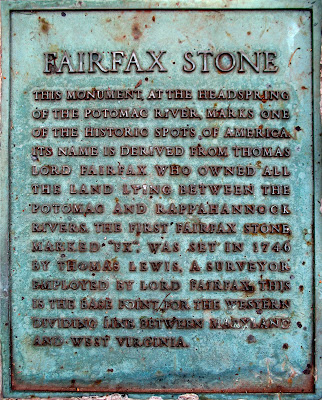 This monument, at the headspring of the Potomac River, marks one of the historic spots of America. Its name is derived from Thomas Lord Fairfax who owned all the land lying between the Potomac and Rappahannock rivers. The first Fairfax Stone, marked by "FX", was set in 1746 by Thomas Lewis, a surveyor employed by Lord Fairfax. This is the base point for the western dividing line between Maryland and West Virginia.

In Sept. of 1649 Charles II, "the Merrie Monarch," was "a king without a kingdom." His father had just been beheaded by the rebellious Parliamentary forces, and he was in exile when he rewarded seven of his loyal followers by granting them a proprietary, the Northern Neck of Virginia, a land grant covering the area between the Potomac and the Rappahanock. The grant didn't have much meaning until Charles got England back in 1660. Sixteen-year-old Thomas Fairfax, Sixth Lord Fairfax of Cameron, inherited 5/6 of the Northern Neck in January of 1710 from his father, the Fifth Lord Fairfax, and got the remaining sixth when his grandmother died in May of the same year. The proprietary was controlled by Thomas's mother, Lady Catherine Fairfax, until her death in 1719 at which time he became the sole proprietor of the Northern Neck of Virginia.

Disagreement soon arose between Lord Fairfax and the Government of Virginia at Jamestown over the exact boundaries of the Northern Neck. In 1733, he petitioned the Privy Council for "a survey and settlement of his marks and boundaries." Did the Fairfax grant run only to the falls of the rivers as some supposed or to the distant head springs of the rivers? Fairfax and Lt. Gov. Gooch of Virginia jointly appointed surveyors to "ascertain, by actual examination and survey, the true fountains of the Rappahannock and Potomac Rivers." In 1736, a party under William Mayo found and marked a spring that they decided was the source of the Potomac. Carolyn Baucom Cook describes and elaborates on the marks left by the Mayo party as described in Thomas Lewis' journal.

In 1745, the council decided that the backline of the Fairfax grant was, in the words of Charles Morrison, "between the south fork of the Rappahannock, known as the Rapidan, and its southern tributary, the Conway River, and the North Branch of the Potomac to the head spring reached and marked by the surveyors in 1736."

In 1746, a survey was instituted with Col. Peter Jefferson and Robert Brooke representing the colony of Virginia, and with Benjamin Winslow and Thomas Lewis representing Lord Fairfax. Peter Jefferson had a son named Thomas who would later become famous. The surveyors marked a stone at the headspring of the Potomac with the initials FX. Joshua Fry and Peter Jefferson published a map of Virginia in 1751. This detail from the Fry/Jefferson map shows the line known as the Fairfax line -- "Lord Fairfax his Boundary Line" -- the northern end of which was marked by the Fairfax stone. 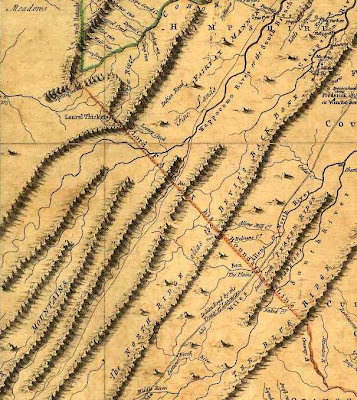 The original Fairfax stone was still standing in 1859 when topograpical engineer Lt. Nathaniel Michler found it. He descibed it this way:


The initial point of the work, the oft-mentioned, oft-spoken of 'Fairfax stone' stands on a spot encircled by several small streams flowing from the springs about it. It consists of a rough piece of sandstone, indifferent and friable, planted to a depth of a few feet in the ground, and raising a foot or more above the surface. Shapeless in form, it would scarcely attract the attention of the passer-by. The finding of it was without difficulty , and its recognition and identification by the inscription 'Ffx' now almost obliterated by the corroding action of water and air.

A conjectural drawing of this stone appears in Carolyn Baucom Cook's 1979 article in the Journal of the Alleghenies. 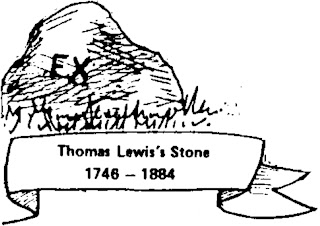 Lt. Michler, who was surveying the disputed western boundary of Maryland, placed﻿ another marker due south of the Lewis stone. Virgil Lewis in his 1904 History of West Virginia gives this sketch of Michler's stone. 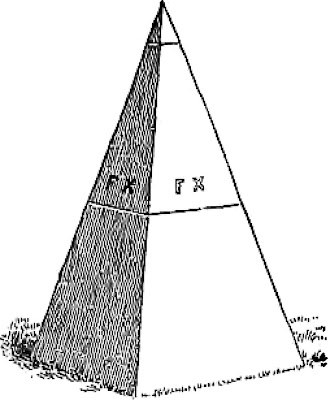 The base was on a level with the surface, and the stones forming the pyramid were three in number, two of which were each two feet high, and the cap-piece or apex, six inches high, all joined. There was no date, but on the middle stone, on each of the four sides were the letters "F X". The joints were cemented and the cutting perfectly true. This stone, one of the most interesting historical monuments in the United States, was destroyed, in December, 1884, by some unknown person, but it is believed to have been the work of some thoughtless boys. The Davis Coal and Coke Company had another stone cut and put in its place, as nearly similar to the original as possible.

J. L. Miller, in The West Virginia Historical Magazine Vol.2, No. 1, January 1902, comments that "In December, 1884, some unknown vandal destroyed this most interesting monument in the Virginias, So that now the visitor sees but a pile of its fragments resting upon the original base" and includes this photo. 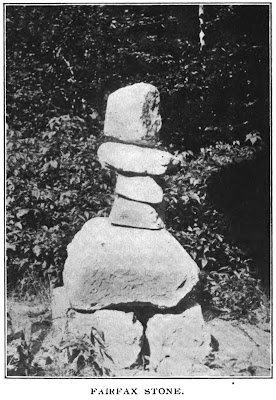 The Davis Coal and Coke Company replacement stone, which Carolyn Baucom Cook calls the third Fairfax stone, looked like this: 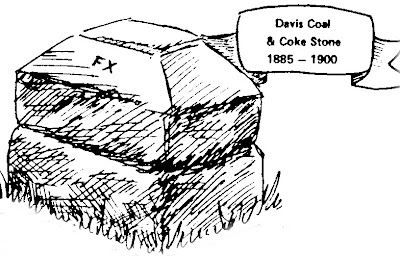 Cook quotes Homer Floyd Fansler's 1962 History of Tucker County for a description of this stone.

A third Fairfax Stone was carved in 1885 by the Davis Coal and Coke Company of Thomas, West Virginia, to replace the vandalized stones. It consisted of "four squared stones, the top one beveled on each side and flattened at the apex, on which was placed a fifth stone, a small one for a cap stone. On one of the beveled edges appeared the letters FX, on its opposite bevel was a coat of arms, possibly that of the Calvert family, the Lord Baltimores of Maryland. This marker was approximately eighteen inches square and twenty four inches high. Two of the stones forming the base were beneath the surface and they settled, giving the stone a leaning position. The cap stone was used as a kind of `post office' by visitors who would leave their name and addresses beneath it for any person interested in acquiring a correspondent."

In 1910, the western boundary of Maryland was settled by the U.S. Supreme Court. In the course of marking the boundary, concrete obelisques were installed as boundary markers. The re-survey began at the Fairfax Stone. This concrete marker replaced the Davis Coal and Coke marker. 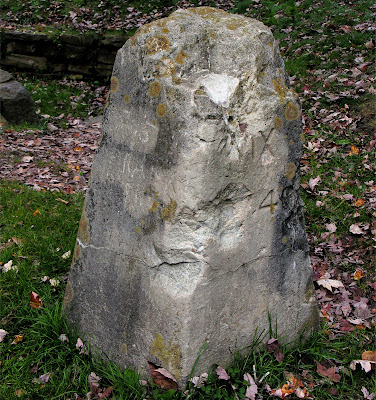 The 1910 court decision describes the marker this way:


The base is of concrete, 3 feet square and 2 feet deep, set flush with the surface of ground. On this base the monument was built, utilizing the form which had been designed for, and was afterwards used in the construction of the monuments along the Potomac river to the Pennsylvania line. The monument is 22 inches square at the base and 10 inches square at the top, the latter being built up a few inches and rounded off. The total height being 4 feet and 4 inches above the base. The monument contains 95 bags of best Portland cement and 6 bags of white sand. It is marked as follows: On south face FFx / 1744 - north face 1910. The corners are beveled 1 inches in width.

Cook's drawing captures the original appearance of this timeworn monument. 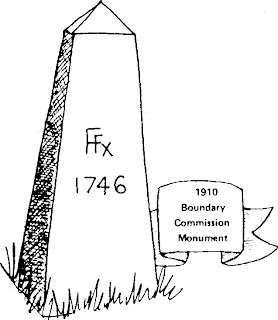 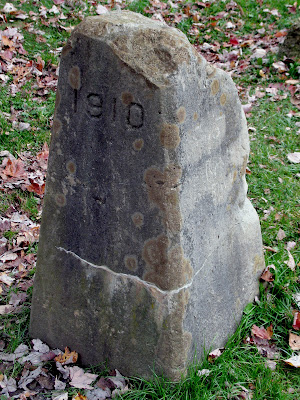 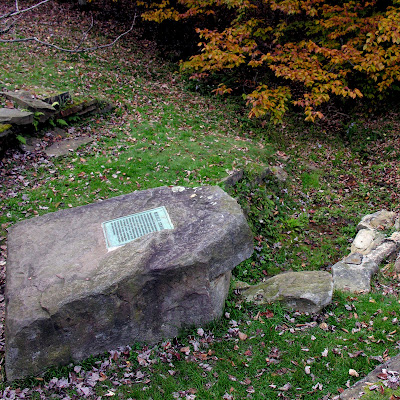 Cook describes the boulder and its dedication:


A bronze plaque explaining the historic importance of the area was embedded in the boulder. On October 5, 1957, Queen Sylvia XXI of the Mountain State Forest Festival dedicated this fifth Fairfax Stone. Thus, the concrete obelisk was joined by the stone marker; once again, two monuments -- two Fairfax Stones -- commemorate the historical (if not geographical) fountainhead of the Potomac River.

The State Park sign tries to link the Fairfax Stone to George Washington. 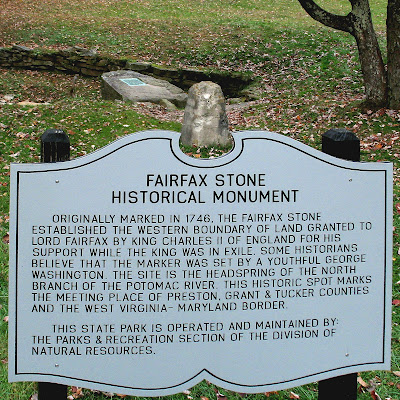 ORIGINALLY MARKED IN 1746. THE FAIRFAX STONE
ESTABLISHED THE WESTERN BOUNDARY OF LAND GRANTED TO
LORD FAIRFAX BY KING CHARLES II OF ENGLAND FOR HIS
SUPPORT WHILE THE KING WAS IN EXILE. SOME HISTORIANS
BELIEVE THAT THE MARKER WAS SET BY A YOUTHFUL GEORGE
WASHINGTON. THE SITE IS THE HEADSPRING OF THE NORTH
BRANCH OF THE POTOMAC RIVER. THIS HISTORIC SPOT MARKS
THE MEETING PLACE OF PRESTON. GRANT & TUCKER COUNTIES
AND THE WEST VIRGINIA- MARYLAND BORDER.

THIS STATE PARK IS OPERATED AND MAINTAINED BY:
THE PARKS & RECREATION SECTION OF THE DIVISION OF
NATURAL RESOURCES. 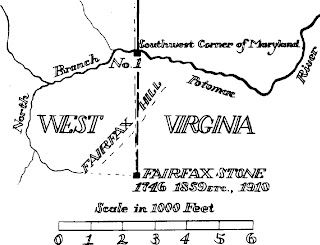 Ownership of the horseshoe-bounded piece of land north of the Fairfax Stone was long disputed but was finally awarded to West Virginia in the 1910 settlement.

The tiny trickle seeping out from below the 1957 boulder marker is conventionally recognized as the first fountain of the Potomac River. 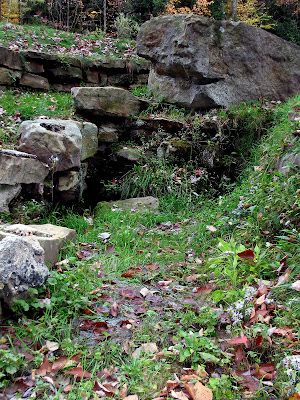 The Potomac travels 382 miles from the Fairfax Stone to its mouth between Point Lookout, Maryland, and Smith Point, Virginia, falling over 3,000 feet in that distance. It's a mile wide at Mt. Vernon and 11 miles wide at its mouth. The average flow measured at Washington DC is 7 billion gallons per day. And here I am, standing astride the Potomac River. 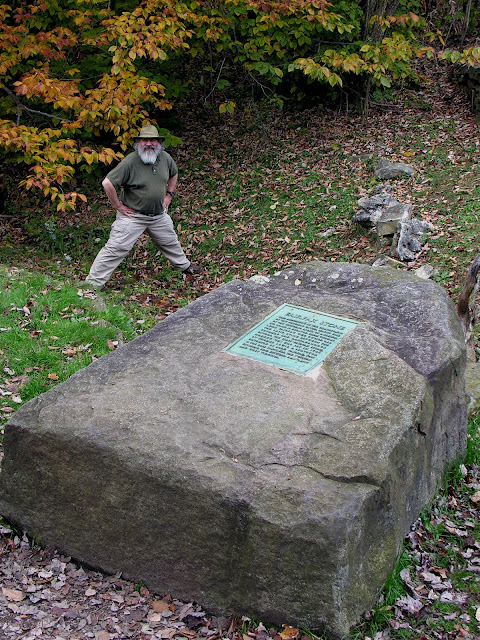