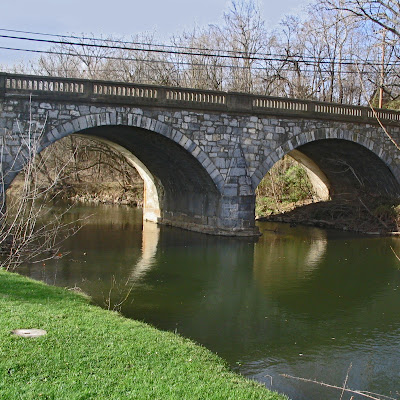 This stone arch bridge across Antietam Creek was built in 1823, by James Lloyd, as part of the construction of the National Pike, an eastern feeder of the National Road. Suitably modified in 1931, it became part of US Route 40. Today this is Alt. 40.

The bridge, built of local limestone, crosses the creek in three arches. The arches are marked by voussoirs but don't have obvious keystones. 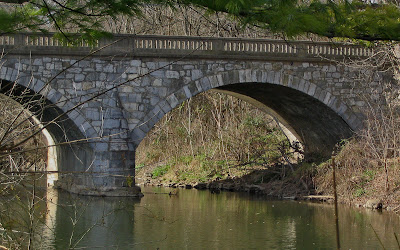 The purpose of this ring embedded in the bridge is unclear to me. 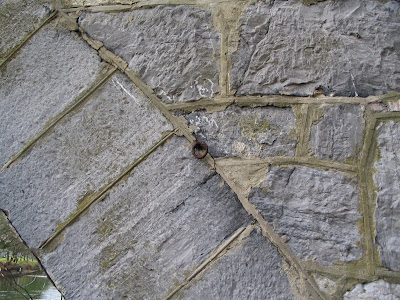 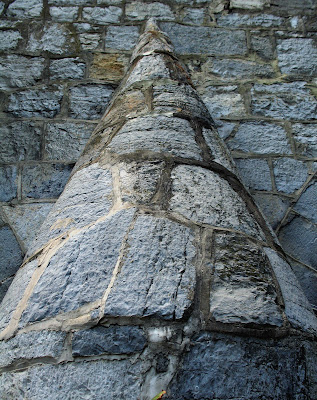 Fossils like this shell can be found in the limestone. 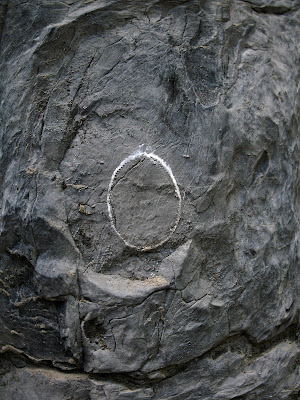 These features are visible only on the upstream (west) side of the bridge. The downstream side was completely covered in concrete when the bridge was widened in 1931. At the same time, the stone parapets on both sides were replaced by concrete balusters. 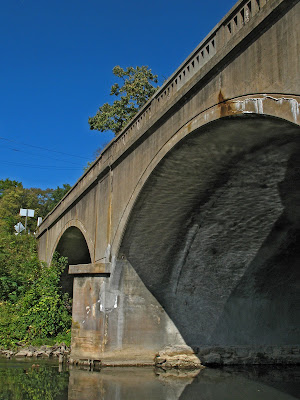 This plaque on the bridge identifies the 1931 commissioners of the SHA and the engineers on the project. 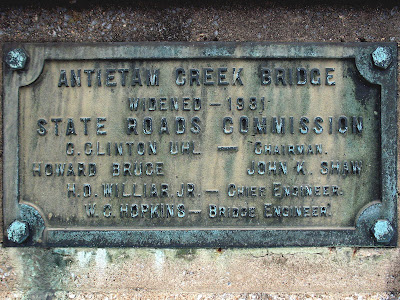 A map from the National Register form shows the physical context of the bridge in the little town of Funkstown.  Antietam Creek flows from northeast to southwest and the bridge has a northwest-southeast orientation. 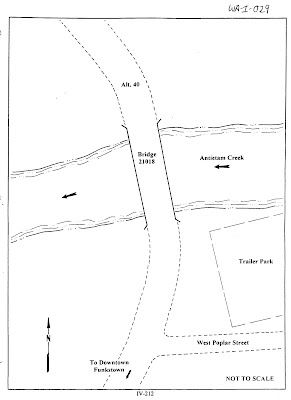 The National Register form places the bridge in historical context as well.


The Funkstown Turnpike Bridge was erected as part of the National Road campaign, a turnpike and bridge building project connecting the eastern seaboard to the Ohio River. Originally conceived under President Washington's administration, Congress approved plans for the road in 1806. Construction of the portion of the National Pike connecting Hagerstown and Boonsboro began in 1822, a year before the bridge itself was built. Once completed, the National Road and the National Pike became the major thoroughfares for goods and travelers heading west. It continued as the primary artery for traffic until the emergence of railroads later in the century. As a result of the National Road and Pike network, existing towns grew and new towns cropped up along its route to accommodate the growing numbers of travelers using the road.

George Stewart took this photo of the bridge when he travelled Rt. 40 in 1953. 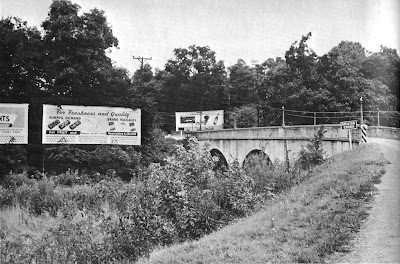 Stewart uses this photo to complain about billboards.

The billboards ruin everything. The historical flavor, the old-time architecture, even the beauty of the wooded hillside -- all are sacrificed. Pole-lines and wires may be accepted, like fences, as part of the basic American landscape. They do their work without striving to be conspic­uous, and often their not-ungraceful curves add a touch of interest, an intricacy of pattern, even some beauty. Billboards are different. In this picture, for instance, a three-wire power-line and two telephone-cables are inconspicuous except perhaps when the power-line insulators break the sky-line. But the billboards blast themselves into the viewer's consciousness.

Although the subject matter differs, there are still billboards on the north end of the bridge. 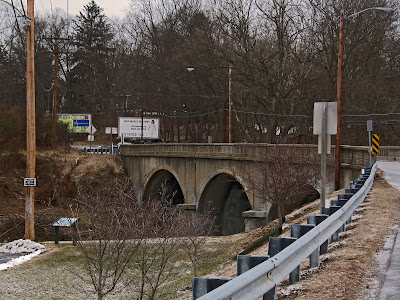 But the bridge has attracted a different kind of sign as well. An Historic National Road wayside marker placed in 2006 discusses the bridge. Although a "Posted" sign placed by the VFW who own this property would seem to discourage people from reading the HNR sign. 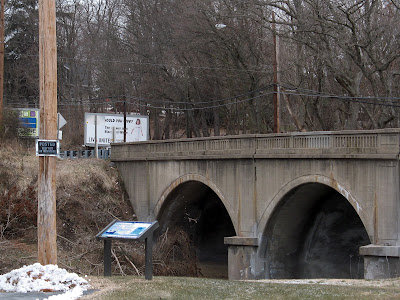 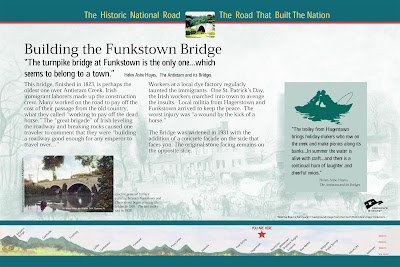 This bridge, finished in 1823, is perhaps the oldest one over Antietam Creek. Irish immigrant laborers made up the construction crew. Many worked on the road to pay off the cost of their passage from the old country, what they called “working to pay off the dead horse.” The “great brigade” of Irish leveling the roadway and breaking rocks caused one traveler to comment that they were “building a roadway good enough for any emperor to travel over…”

Workers at a local dye factory regularly taunted the immigrants. One St. Patrick’s Day, the Irish workers marched into town to avenge the insults. Local militia from Hagerstown and Funkstown arrived to keep the peace. The worst injury was “a wound by the kick of a horse.”

The Bridge was widened in 1931 with the addition of a concrete façade on the side that faces you. The original stone facing remains on the opposite side.

This old postcard by R. M. Hays and Brothers shows boaters downstream from the bridge and an electric trolley from Hagerstown heading southward into Funkstown. This is the side of the Bridge now covered in concrete. 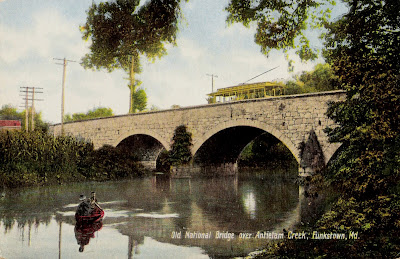 Although the postcard is undated, the photo must have been taken between 1901 and 1939. The HNR sign says that "Electric powered trolleys running between Funkstown and Hagerstown began crossing the bridge in 1901. The last trolley ran in 1939."

A quote from Helen Ashe Hayes, author of The Antietam and Its Bridges, is illustrated with a kiss on the HNR sign. 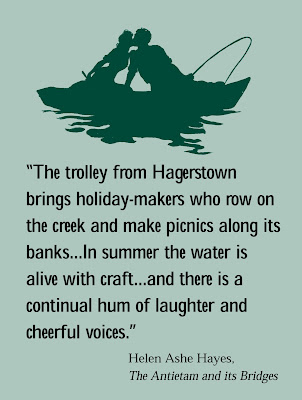 “The trolley from Hagerstown brings holiday-makers who row on the creek and make picnics along its banks…In summer the water is alive with craft…and there is a continual hum of laughter and cheerful voices.”

John C. Artz' photo from Helen Hayes' 1910 book is very similar to the postcard above and includes the same ivy-covered pier and tree.

The floodplain on the Funkstown side of the bridge is occupied by the Antietam Village trailer park. 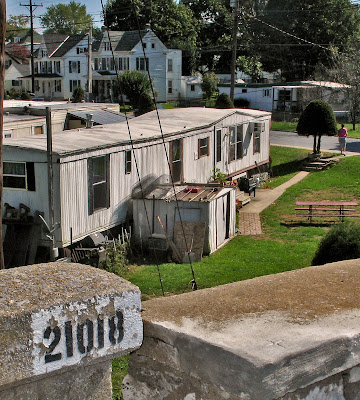 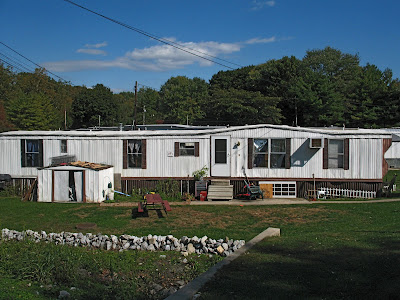 Funkstown itself dates from 1767. The town seal seen here on a "Welcome to Funkstown" sign indicates that the town was incorporated in 1840. 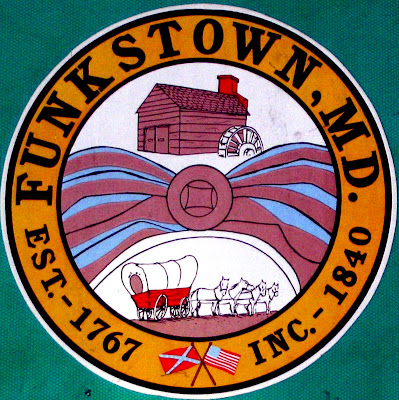 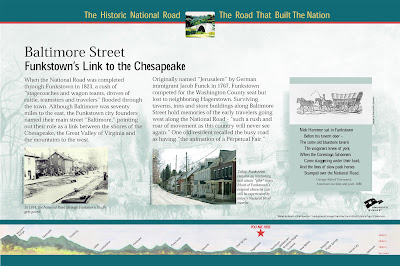 When the National Road was completed through Funkstown in 1823, a rush of “stagecoaches and wagon teams, droves of cattle, teamsters and travelers” flooded trough the town. Although Baltimore was seventy miles to the east, the Funkstown city founders named their main street “Baltimore,” pointing out their role as a link between the shores of the Chesapeake, the Great Valley of Virginia and the mountains to the west.

Originally named “Jerusalem” by German immigrant Jacob Funck in 1767, Funkstown competed for the Washington County seat but lost to neighboring Hagerstown. Surviving taverns, inns and store buildings along Baltimore Street hold memories of the early travelers going west along the National Road - “such a rush and roar of movement as this country will never see again.” One old resident recalled the busy road as having “the animation of a Perpetual Fair.”

Here, Jan peers over the concrete parapet of the Funkstown Turnpike bridge. 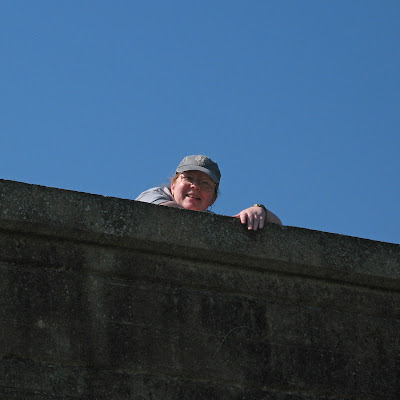