The Gin Riot, Rodgers' Bastion and the Downward Dog 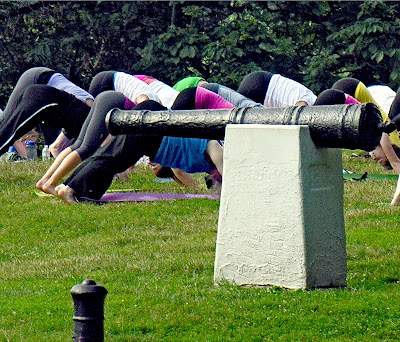 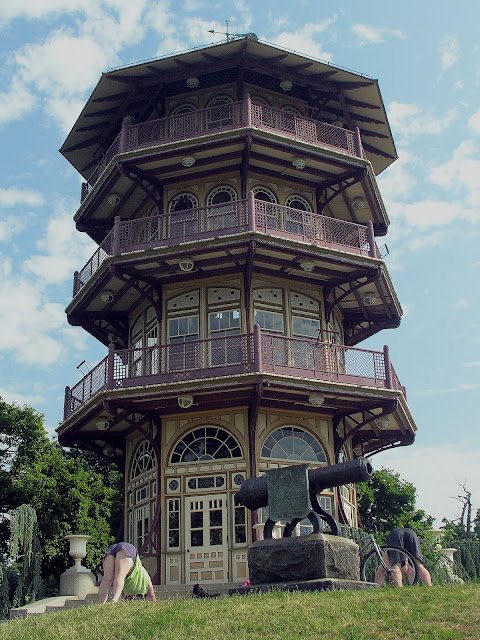 These young Baltimoreans are not mooning me, they're practicing yoga doing the Downward Dog on the top of Hampstead Hill in Patterson Park. Hampstead Hill was the site of the Baltimore Gin Riot in 1808 and the site of Rodgers' Bastion during the battle of North Point in 1814.

In 1808, American resentment was growing against our former mother country, Great Britain. This level of anger would eventually lead to the declaration of war against Britain in 1812. Here on Hampstead Hill, Baltimoreans burned 720 gallons of gin in protest against British mistreatment.  I'll let Baltimore historian Thomas Scharf tell the story:


Gin that had Paid Tribute.

In 1808, while the popular mind was inflamed against Great Britain by the constant insults and aggressions of that power, an English shoemaker of Baltimore named Beattie used some offensive expressions concerning the United States. In the excited state of public feeling the slightest cause was sufficient to kindle indignation, and the people accordingly seized the unfortunate shoemaker, tarred and feathered him, and rode him in a cart from the corner of South and Baltimore Streets to Fell's Point and back again, followed by the mayor and a number of citizens who attempted to rescue him. Several of the guilty parties were arrested, tried, fined, and imprisoned, but were all pardoned by the Governor and their fines remitted.

On the 30th of September, 1808, the indignation of the people was again aroused by the appearance of the following address "To the people of Maryland," which appeared in the daily press:

"This day, the 30th of September, arrived in Baltimore the brig 'Sophia' of Baltimore. Samuel Carman master, from Rotterdam by the way of Harwick (England), having been sent into that port in consequence of the British Order In Council of No. 11, and there compelled to pay duty or TRIBUTE and all port or other charges, as if the said master had voluntarily carried his vessel into the port of Harwich aforesaid, as by the following incontestable documents may fully appear."

Then follows the proof, consisting of the clearance and permission of the English collector of customs, specifying the cargo as six puncheons, containing seven hundred and twenty gallons of Geneva gin, on which export duty had been fully paid. The importation of this cargo of gin created the greatest excitement, because it had paid "an infamous tribute," and a town-meeting having been called, it was decided to burn it on Hampstead Hill. The owner, to escape the fury of the populace, gave his consent that the gin should be " condemned to the flames."


It was determined to burn this unholy gin with all the pomp and ceremony demanded by so important an occasion, and accordingly, on the 4th of October, 1808, the houses were deserted, and the city gave itself up to the celebration of the event. A monster procession was formed, which moved about two o'clock in the afternoon, and which was led by a beautiful barge on wheels, adorned with flags and streamers, and manned by masters of vessels. From her rigging floated flags eloquent with such patriotic inscriptions as "No Gag Bills," "No Stamp Act," "Bunker Hill Forever!," "No Tribute," "Liberty of the Seas, Huzza!" 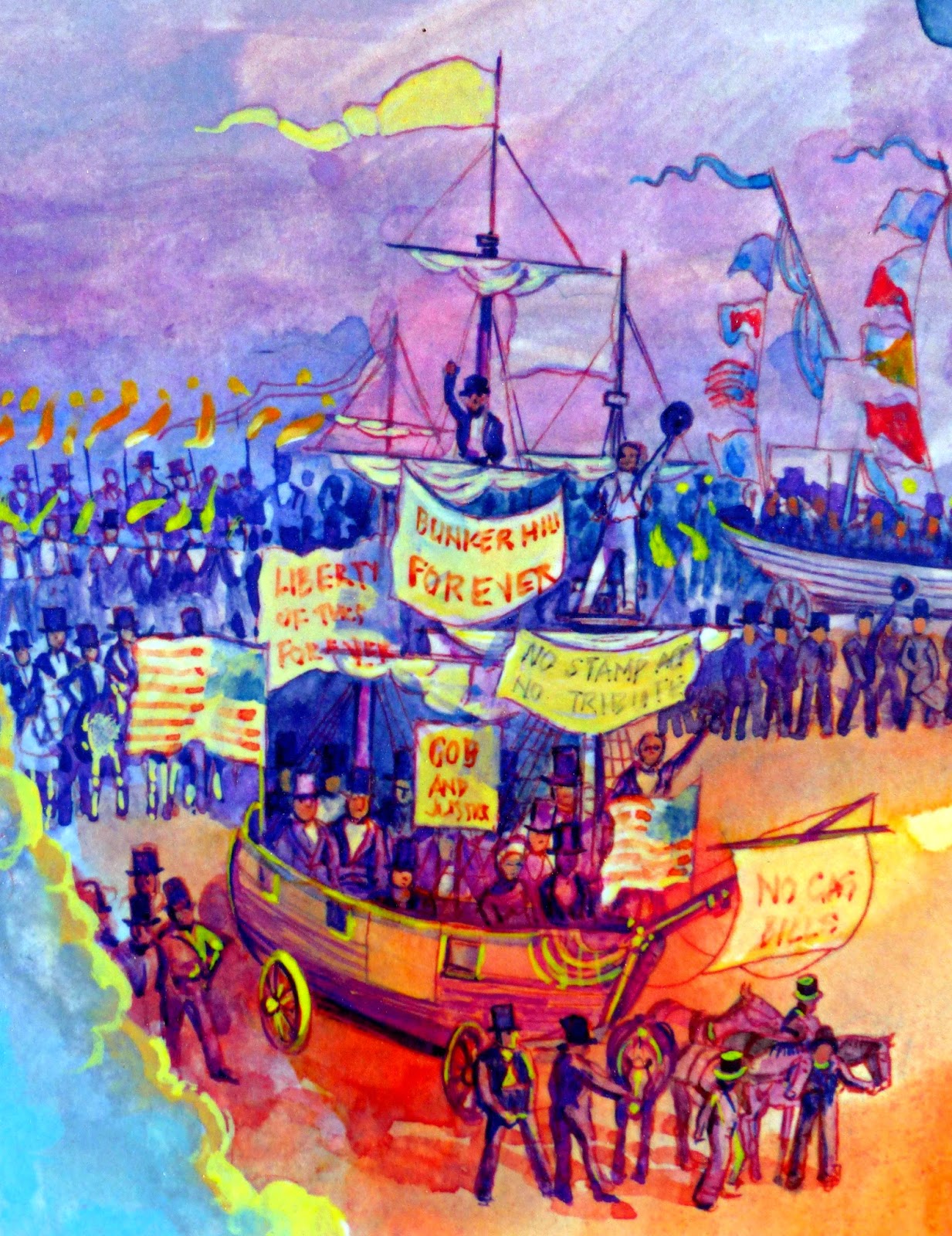 This was followed by twelve hundred horsemen, preceded by a trumpeter, and the horsemen by a banner bearing the motto "God Speed the Plow." Next came more than four hundred sailors, with an American ensign and a white flag labeled "A proof that all the American seamen have not gone to Halifax," an allusion to the seizure of a number of the crew of the frigate "Chesapeake." After the sailors came a car bristling with national mottoes, followed by about five hundred citizens in platoons the width of the street; and after another vessel beautifully decorated came another large body of citizens, the whole procession marching to the patriotic and inspiring strains of "Yankee Doodle." The procession moved through the chief streets of the city, and arrived at Hampstead Hill, the place where the gin was to be destroyed, "at early candle-light." A general illumination of the whole vicinity lighted up the scene; the citizens on horseback formed an immense circle, and the tributary gin was fastened to a sort of gallows in the centre, to which was attached a flag inscribed "British Orders in Council." At length the fagots were kindled, and the proscribed liquor blazed to heaven amidst the discharge of cannon and the applause of fifteen thousand citizens met to show their love for independence, and to burn gin that had paid tribute to England. 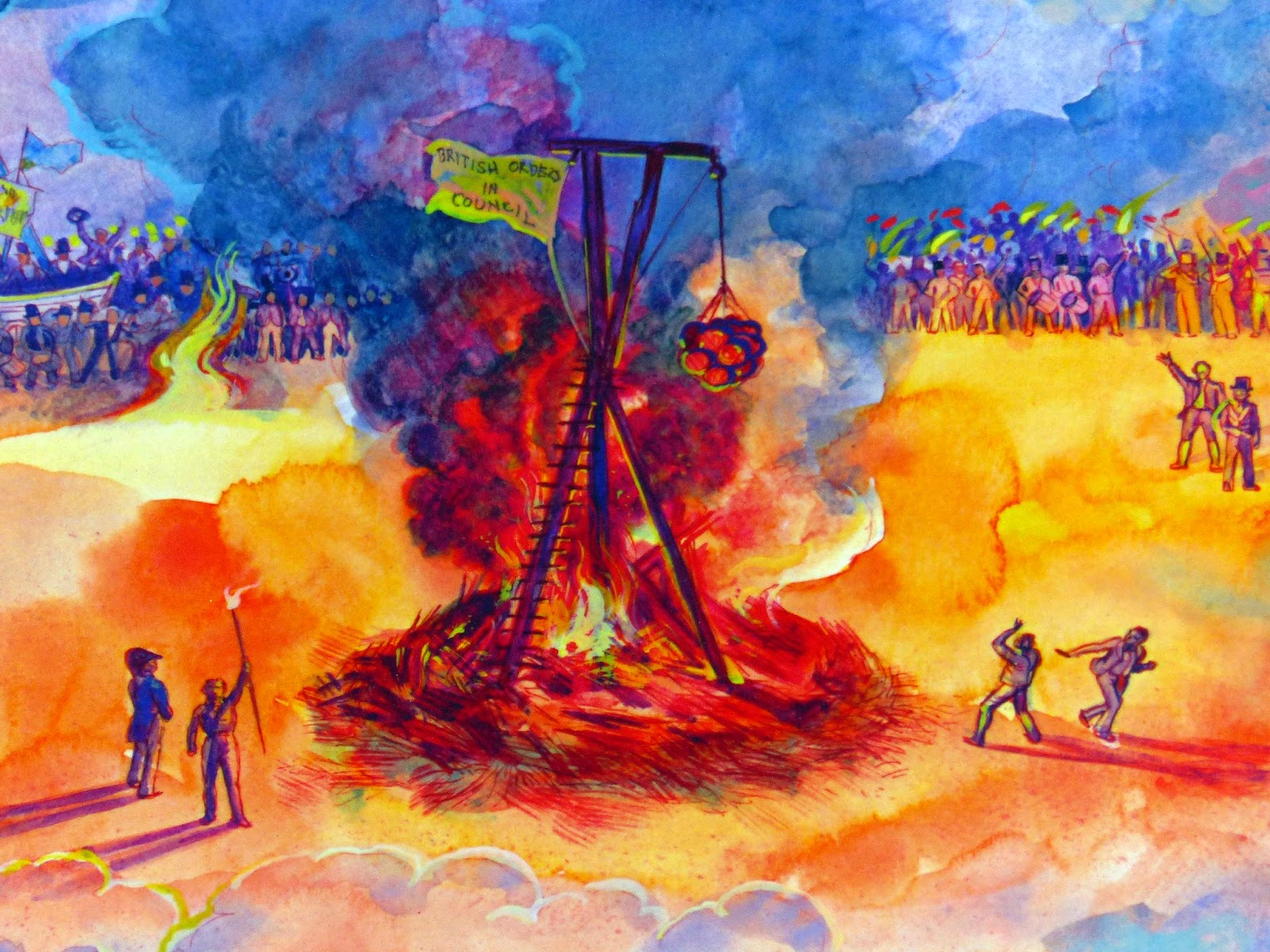 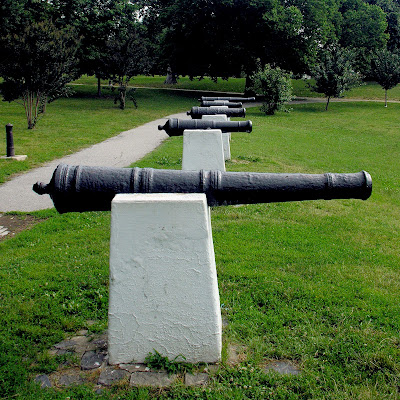 Six years later in 1814, Hampstead Hill stood in front of an invading force of British troops while the British fleet bombarded nearby Fort McHenry. The war of 1812 had been going on for two years, Britain had defeated Napoleon and sent crack troops to "Chastise Jonathan." They had burned Washington after the disastrous battle of Bladensburg and pushed their way up the peninsula toward Baltimore from North Point. On the evening of Sept. 12, 1814, British Colonel Brooke who took over on the death of Ross, faced a line of fortifications running between Fells Point and Belair Roads, blocking his way into Baltimore. The chain of fortifications is illustrated in this map from Scott Sheads' The Rockets' Red Glare: 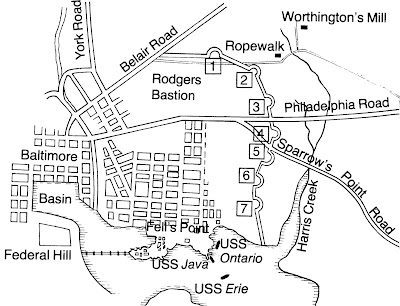 These entrenched fortifications were known as Rodgers' Bastion after Commodore John Rodgers who commanded sailors and marines assigned to the artillery in the fortifications. The whole line contained over 100 guns and 12,000 men. Hampstead Hill, or Chinquapin Hill as it is also called, was the site of Bastion No. 5 commanded by Sailing Master George de la Roche and Midshipman Robert Fielding, No. 5 on the map above. 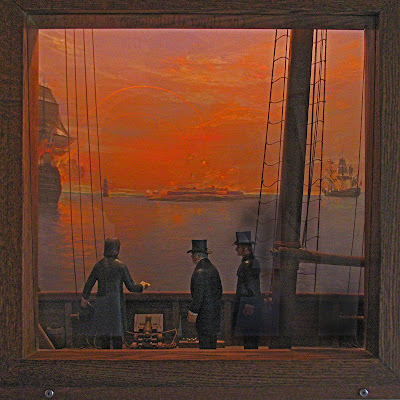 On the morning of September 13, it became apparent that the attack on Fort McHenry had failed and the British retreated back to their ships at North Point. Francis Scott Key, Dr. William Beanes and John Skinner on the the President, saw the garrison flag still flying over Ft. McHenry, and Key wrote a poem about it with which we are all familiar.

Today, these cannons placed here by the Society of 1812 in 1906 mark the location of Bastion No. 5. They may actually have been in the defense of Baltimore but are much smaller than the naval guns that were actually mounted here. The contours of the earthworks are still visible. 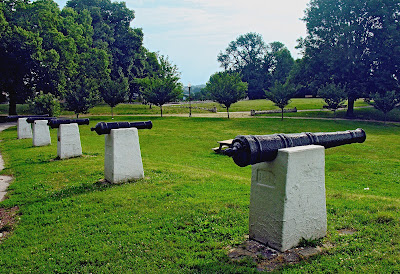 This illustration from Harper's Magazine for March 1864, shows Benjamin Lessing's impression of this spot as it appeared in 1850. 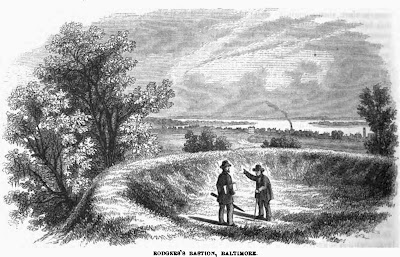 In this picture from the Official Programme of the the National Star Spangled Banner Centennial in 1914, the earthen breastworks are more visible: 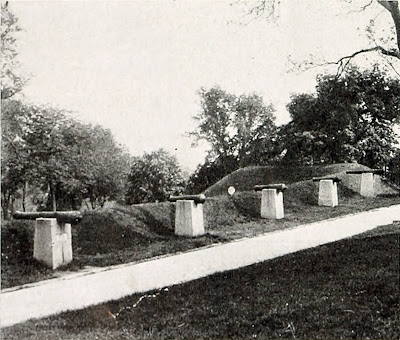 In 1914, two monuments were placed here as part of the centennial celebration. The Official Programme includes these two successive entries on the morning of September 11th:

Unveiling of Memorial erected by the Pupils of the Public Schools of Baltimore City, Marking the Site of the Head­quarters of General Samuel Smith, Commander-in-Chief of the Defenders of Baltimore in 1814.


Memorial Cannon "Rodgers Bastion."
Site the Headquarters Commodore John Rodgers, in Command of the Marine Forces Engaged in the Defense of Baltimore in 1814. 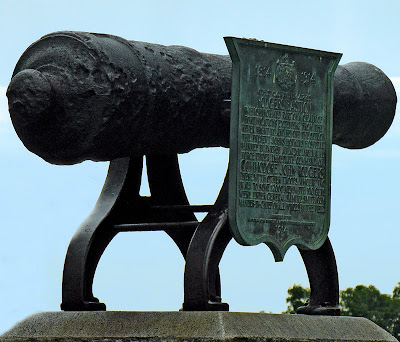 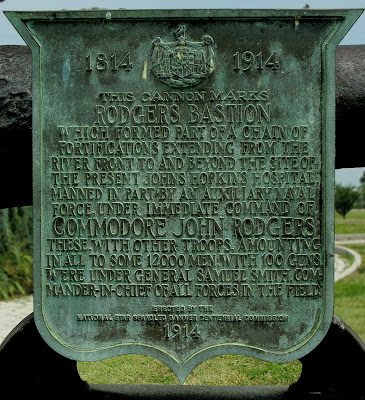 1814-1914
This cannon Marks
Rodgers Bastion
which formed part of a chain of
fortifications extending from the
river front to and beyond the site of
the present Johns Hopkins Hospital,
manned in part by an auxiliary naval
force, under immediate command of
Commodore John Rodgers.
These, with other troops, amounting
in all to some 12000 men, with 100 guns
were under General Samuel Smith, Com-
mander-in-Chief of all forces in the field.
Erected by the
National Star Spangled Banner Centennial Commission
1914
﻿ 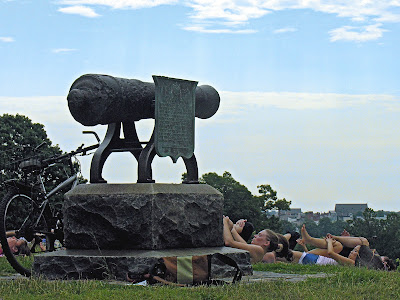 According to Ralph Eschelman, "The Star-Spangled Banner Centennial Memorial, designed by J. Maxwell Miller, fancifully depicts two children who found a scroll while on their way home from school. The Scroll tells the story of how the national anthem came to be written." 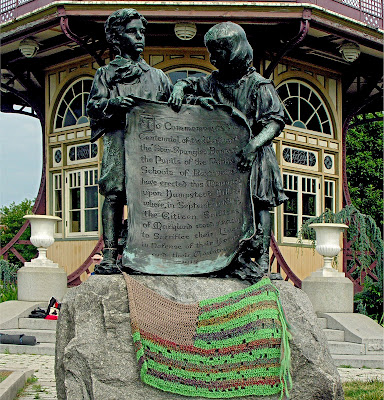 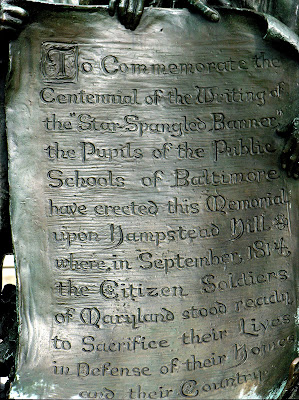 To Commemorate the
Centennial of the Writing of
the "Star Spangled Banner,"
the Pupils of the Public
Schools of Baltimore
have erected this Memorial
upon Hampstead Hill *
where, in September, 1814
the Citizen Soldiers
of Maryland stood ready
to Sacrifice their Lives
in Defense of their Homes
and their Country.

The ﻿knitted flag in reverse colors is a contemporary feature. Eschelman further says that this memorial served as a float in the 1914 centennial parade. As the plaque indicates, this monument was supported by funds donated by school children. 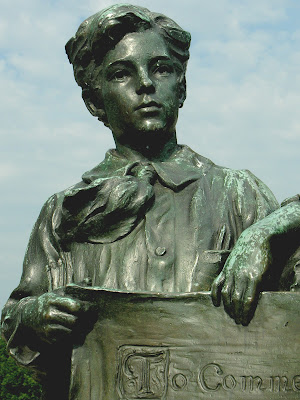 The 15-star, 15-stripe flag flying over Patterson Park is another reminder of the War of 1812. 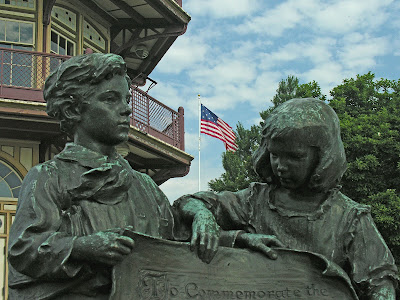 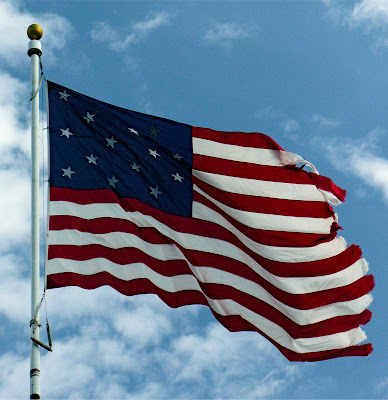 In 1814, there were 18 states in the union but the form of flag had not been updated since 1795 when two stars and two stripes were added for Vermont and Kentucky. The 15-star, 15-stripe flag is often called the Fort McHenry Flag or the Star Spangled Banner. 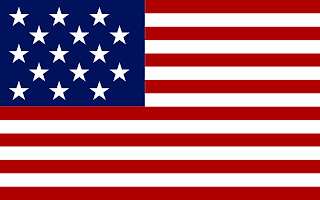 This marker describes the civil war military hospital that occupied this site. 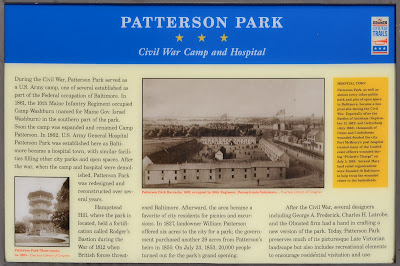 During the Civil War Patterson Park served as a U.S. Army camp, one of several established as part of the Federal occupation of Baltimore. In 1861 the 10th Maine Infantry Regiment occupied Camp Washburn (named for Maine Gov. Israel Washburn) in the southern part of the park. Soon the camp was expanded and renamed Camp Patterson. In 1862, U.S. Army General Hospital Patterson Park was established here as Baltimore became a hospital town, with similar facilities filling other city parks and open spaces. After the war, when the camp and hospital were demolished, Patterson Park was redesigned and reconstructed over several years.

Hampstead Hill, where the park is located, held a fortification called Rodgers' Bastion during the War of 1812 when British forces threatened Baltimore. Afterward, the area became a favorite of city residents for picnics and excursions. In 1827, landowner William Patterson offered six acres to the city for a park; the government purchased another 29 acres from Patterson's heirs in 1850. On July 23, 1853, 20,000 people turned out for the park's grand opening.

After the Civil War, several designers including George A. Frederick, Charles H. Latrobe, and the Olmsted firm had a hand in crafting a new version of the park. Today, Patterson Park preserves much of its picturesque Late Victorian landscape but also includes recreational elements to encourage residential visitation and use. 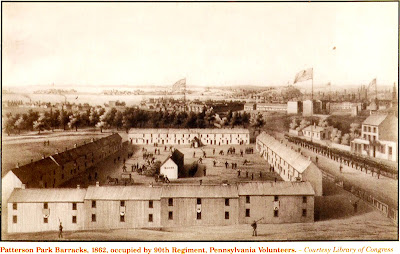 The 1814 earthworks were still visible in September of 1862 as shown on this map of  110th NY Volunteers' the bivouac at "Camp Patterson Park". 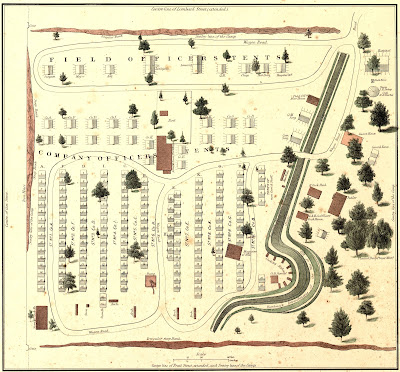 The Pagoda, the Patterson Park Observatory, was built in 1892 by Charles H. Latrobe who was the Superintendent of Parks at that time. 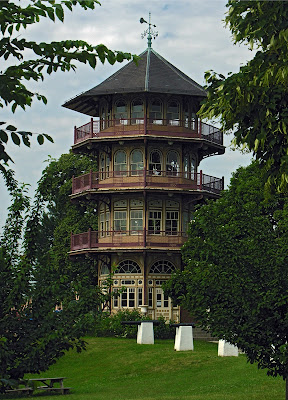 It's a good place for yoga. 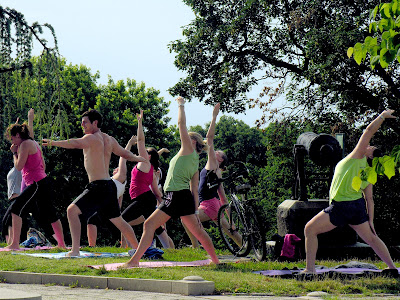