A Ghost Town in the Southwest Corner of Maryland 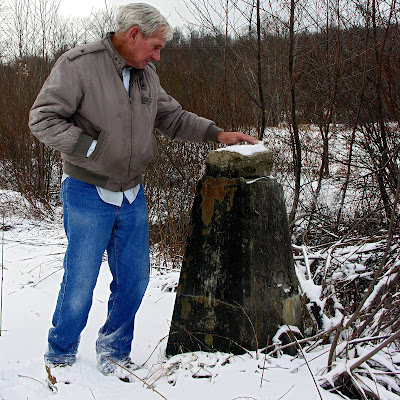 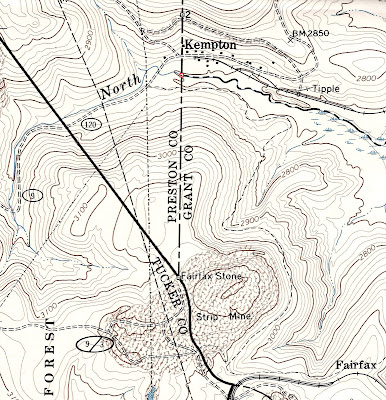 The Potomac at Kempton is a creek, not the trickle we find at the Fairfax Stone. 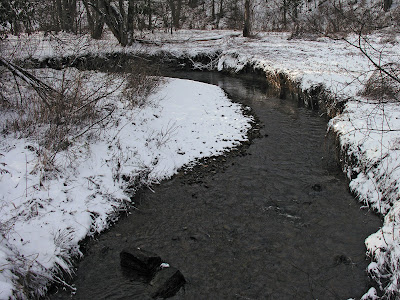 Concrete marker "No. 1" was placed here in 1910 as part of the Supreme Court decision that finally established the Deakin's line as the western boundary of Maryland. This drawing from Charles Morrison shows the marker seen from the north across the stream. 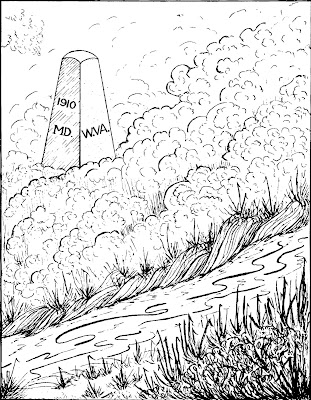 This 2001 snapshot shows the marker in the weeds on the south bank of the stream in a western Maryland snowstorm. 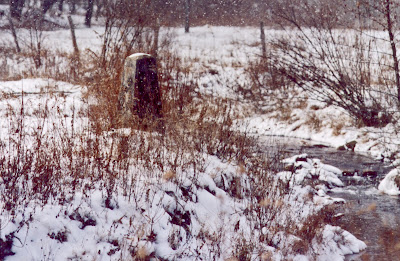 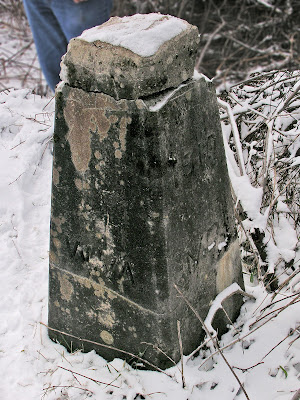 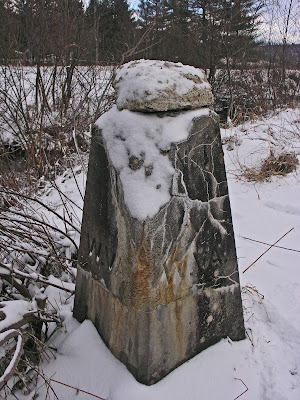 I was led to the marker by Brad Corbin over a cold muddy wetland and through rhododendron thickets. He lamented the cutting of trees and the water pollution that plagues the area but shared a irrepressible pride in the history of his town. 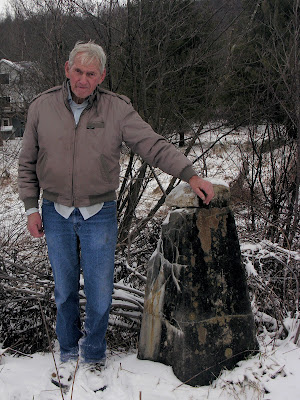 Kempton today is a ghost town, a few old houses along an isolated road. When the coal mine closed in 1950, Kempton closed up with it. But in its time, Kempton was a model coal town. The Garrett County Historical Society's book, Ghost Towns of the Upper Potomac, describes the old Kempton this way:


Founded in 1913 by the Davis Coal & Coke Company, a strip of land 3/4 of a mile long and several hundred feet wide was cleared for the construction of company houses, four to six rooms each with a front yard and a garden in the back. In 1915, J. Weimer became the first school teacher at $40 a month with 53 pupils. The company store was located on the West Virginia side along with the Opera House that contained the lunchroom, bowling alley, pool table, dancing floor, auditorium, and the post office.

This 1917 photo, looking west across the town, shows the neat company houses arrayed along the two streets. 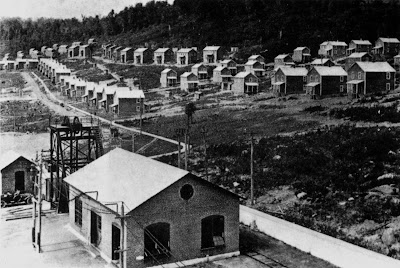 Kempton mine, # 42, consisted of three 420 foot shafts into the Upper Freeport coal vein. One was a "man-shaft," one a coal shaft, and one was used for ventilation. The water that had to be pumped from the mine was dumped directly into the stream. Brad Corbin regrets the loss of native trout due to the resulting water pollution. 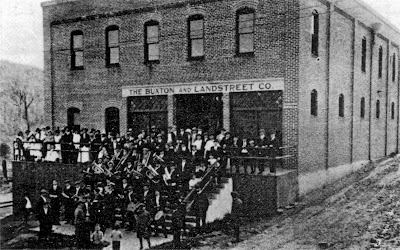 Miners could get cash advances in company scrip, called "chinky tink" by the miners, tin coins with a K stamped into them that could be used at the company store. This photo of Kempton company scrip comes from Gilbert Gude's book Where the Potomac Begins.

Carl E. Feather somewhat dramatically links the fate of the company scrip to the fate of Kempton.


AT MIDNIGHT APRIL 15, 1950, the Buxton & Landstreet Company store and the Davis Coal & Coke Company's Mine Forty-two at Kempton, Maryland, ceased operations. Kempton was mortally wounded that night and died forty-two days later when its economic lifeblood, the company scrip now worthless was collected and tossed down the 480-foot mineshaft. Black earth was bulldozed over the opening and the town dump erected above it as a tombstone. The token profits reaped by the company store were returned to their source.

These ruins are all that's left of the Buxton and Landstreet company store today. 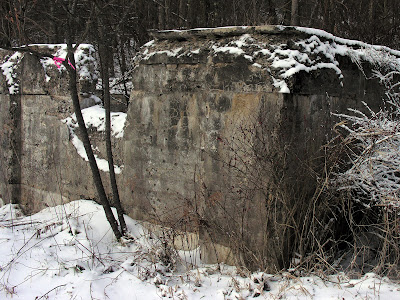 A red brick building at the turn of the road on the West Virginia side was a storage building for Buxton and Landstreet and a carpenter shop for the Kempton Mine; mules were kept in the back. This building belongs to Mr. Corbin now. He says it has no value but he wouldn't take a fortune for it. The tin sign in this photo marks the Maryland West Virginia Boundary. 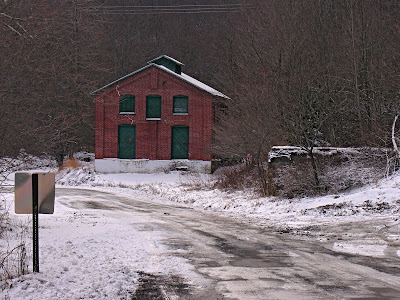 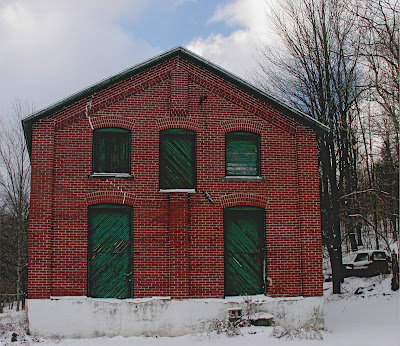 A few of the company houses still line Kempton Road. This one, south of the road, backs onto the Potomac, and Fairfax Hill rises behind. 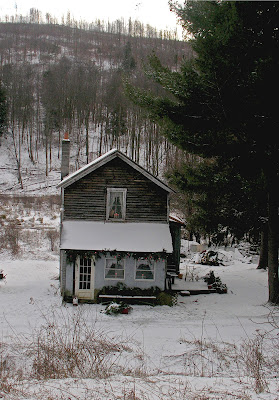 A yellow cat watches from the window. 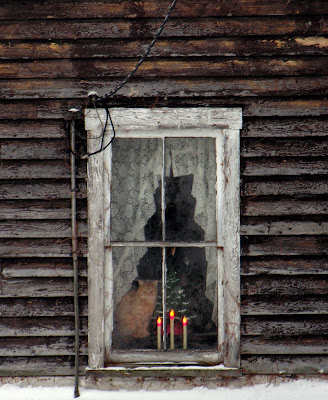 The house that Brad Corbin and his sister live in was the mine superintendent's house. 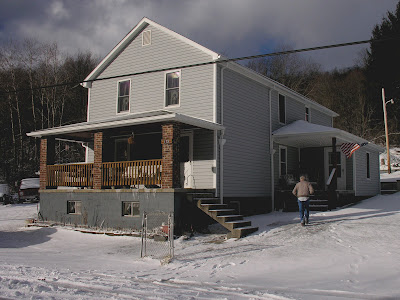 Brad Corbin was born in Kempton in 1932. His father worked the coal mine.  Mr. Corbin left Kempton after service in the Korean War and worked for Sears and Roebuck in Cincinnati Ohio. He returned to Kempton in retirement. Bradley Corbin's parents were Claude and Gladys Davis Corbin who are well treated in Gude's book. Brad is unofficially "The Mayor of Kempton." 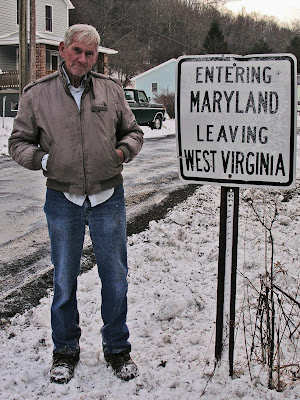