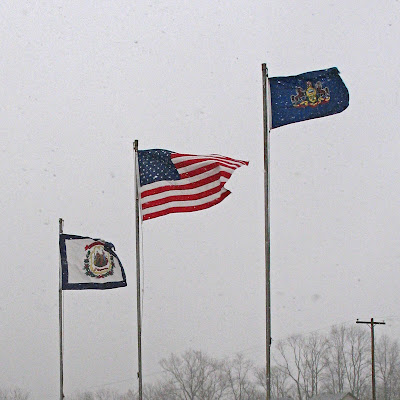 The Western End of the Mason-Dixon Survey

These West Virginia, Pennsylvania and the U.S. flags represent Brown's Hill's place on the boundary between those two states and its place in American History. 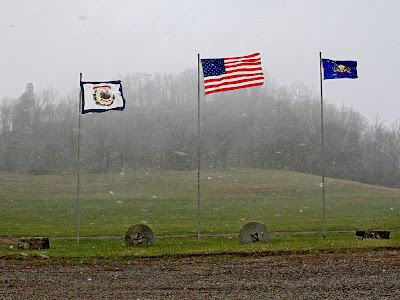 This spot is the western end of Mason and Dixon's famous west line. Brown's Hill is marked with a D in this map from Bayliff, 1951: 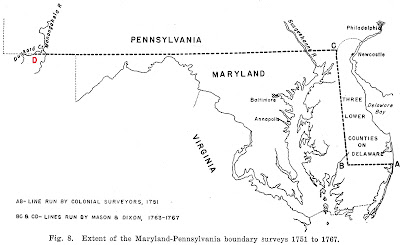 (C is the Northeast Corner of Maryland, B the Middle Point of the Transpeninsular Line and A is Fenwick Lighthouse.)

In October 1767, Charles Mason and Jeremiah Dixon found themselves stymied. Their Native American escorts arranged by General Johnson representing a grant of free passage by the Six Nations refused to go any farther west. They were marking the southern border of Pennsylvania, having passed the southwest corner of Maryland 21 miles to the east. This was the line between Pennsylvania and Virginia. They had 30 miles to go before marking out the 5 degrees of longitude required by Pennsylvania's charter. This West Virginia historical marker tells the story: 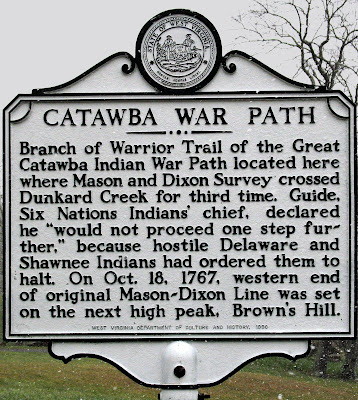 Catawba War Path
Branch of Warrior Trail of the Great Catawba Indian War Path located here where Mason and Dixon Survey crossed Dunkard Creek for third time. Guide, Six Nations Indians’ chief, declared he “would not proceed one step further,” because hostile Delaware and Shawnee Indians had ordered them to halt. On Oct. 18, 1767, western end of original Mason-Dixon Line was set on the next high peak, Brown’s Hill.

The Indian guides had been with them since July 16. Mason wrote in his journal for that day:


Continued the Line. This day we were joined with 14 Indians. viz. Mohawks and Onondagas sent by the Six Nations to conduct us through their country. namely three Onondagas and eleven Mohawks. (With them came Mr. Hugh Crawford, Interpreter.)

As the survey party crossed Dunkard Creek for the first time, 15 ax men quit for fear of the Indians and had to be replaced with new workers from Fort Cumberland. As they crossed the creek the third time, they passed the Catawba War Path. Mason wrote in his October 8th journal what happened that day:


This day the Chief of the Indians which joined us on the 16th of July informed us that the above mentioned War Path was the extent of his commission from the Chiefs of the Six Nations that he should go with us, with the Line; and that he would not proceed one step farther Westward.

Mason and Dixon found themselves in the floodplain of Dunkard Creek 233 miles from the Post Marked West and 30 miles short of their objective when their survey came to its end. The line was completed to the southwest corner of Pennsylvania in 1784 by commissioners from Virginia and Pennsylvania.  Mason wrote on Sunday, October 11:


Set up the Sector in the Direction of our Line at the distance of 233 Miles 13 Chains and 68 Links from the Post marked West in Mr. Bryan's Field, and made the following Observations....[here follow two pages of astronomical notes.]

They moved to the top of nearby hill and placed a mound of stones to mark the line. Mason described the mound the following note:


Note: The Sector stood on the top of a very lofty Ridge, but when the Offset was made of 3 Chains 38 Links it fell a little Eastward of the top of the Hills; we therefore extended the true Parallel 3 Chains 80 Links Westward which fell on the top of the said Ridge; there viz. at 233 Miles 17 Chains 48 Links from the Post marked West in Mr. Bryan's Field, we set up a Post marked W on the West Side and heaped around it Earth and Stone three yards and a half diameter at the Bottom and five feet High. The figure nearly conical.

Here the spot is marked on the large strip map Mason and Dixon published in 1768. 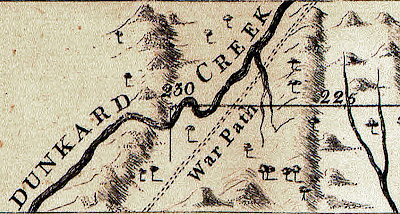 The old mounds placed by Mason and Dixon west of Sidling hill decayed over time. When C.H. Sinclair re-surveyed the West Virginia-Pennsylvania boundaries in 1883, he found the mound at Brown's Hill and placed a stone marker in it. E.L. Kemp in the 1972 National Register form give the following account.

The date and the initials W.V. are still visible on Sinclair's stone at the top of Brown's Hill. 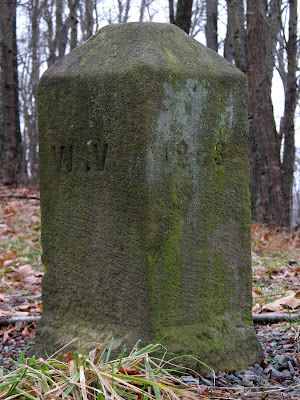 But the distance measure is not readable (to me at least). 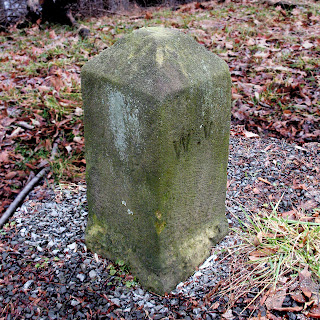 A decade later, conflict persisted between the Native Americans and European immigrants around Dunkard Creek. Mrs. Bozarth became a border heroine in 1779 when she fought off indian attackers. The West Virginia historical marker commemorates the event. 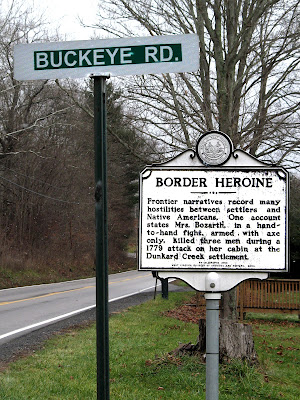 Frontier narratives record many hostilities between settlers and Native Americans. One account states Mrs. Bozarth, in a hand-to-hand fight, armed with axe only, killed three men during a 1779 attack on her cabin at Dunkard Creek settlement.

Rev. James Finley (a.k.a Old Chief Ra-Wah-Wah) relates the story of this "severe and bloody affair."


During these bloody wars, also, exploits were performed by females worthy of a record upon the page of the world’s history. One occurred at Dunkard Creek, about the same time as the former. Two or three families had fed for safety to the house of a Mr. Bozarth. The Indians came upon it when it contained only Mr. Bozarth and two other men. Warned by the children, who were playing outside, that the “ugly red men" had come, one of the men ran to the door.   He received a shot and fell. The Indian, who had shot him, sprang in after him, and grappling with the other white man was thrown down. Having no weapon, he called upon Mrs. Bozarth for a knife. Not finding a knife, she seized an ax and with a single blow cleft the head of the savage. At that moment another Indian shot the white man dead. Mrs. Bozarth, by a well-directed blow, leveled the savage with her ax. Others were crowding in behind; the first received a blow on the head. As the others drew back, she succeeded in closing and fastening the door. The two white men, though both severely wounded, aided  the heroine in maintaining the defense, till a detachment  from  a  neighboring  settlement  came up for  their  relief. All the children in the yard were butchered by the incarnate fiends. The whole transaction lasted hardly three minutes; and yet, considering the numbers and the circumstances, was a severe and bloody affair. 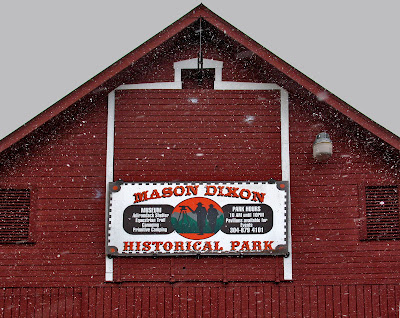 It's a steep climb up and along the ridge to spot that Mason and Dixon marked. This map from West Virginia Hiking shows the route and the boundaries of the park. 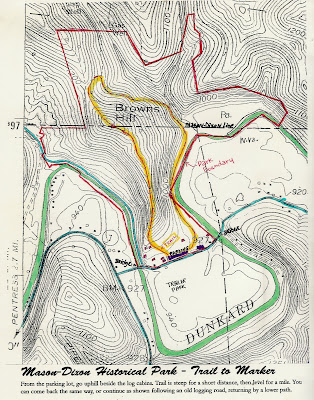 The old marker stands in a small clearing on top of the ridge under a massive red oak tree that Jack Layton says may be over 400 years old. 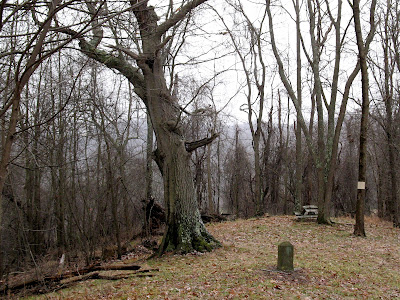 Two other markers can be found here. 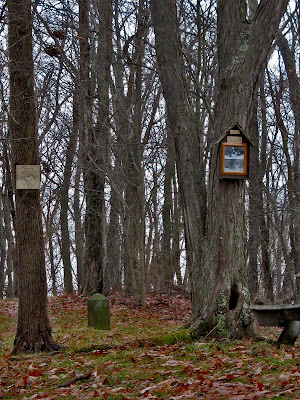 One warns that the site is an important archaeological area. 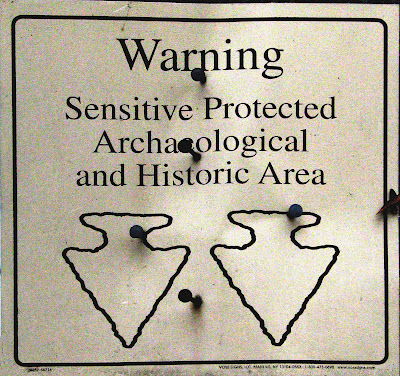 The other is dedicated to Scooby and Scrappy. 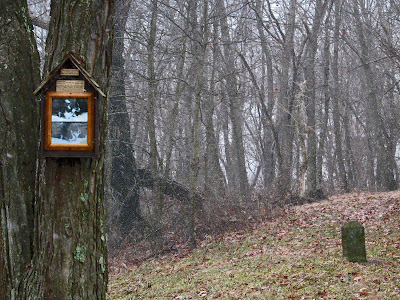 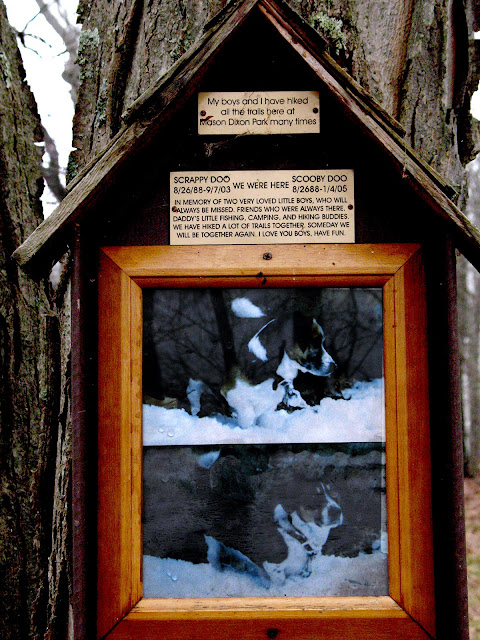 In Memory of two very loved little boys, who will always be missed. Friends who were always there. Daddy's little fishing, camping and hiking buddies. We have hiked alot of trails together. Someday we will be together again. I love you boys. Have fun.