Braddock's Rock -- The Key of Keys 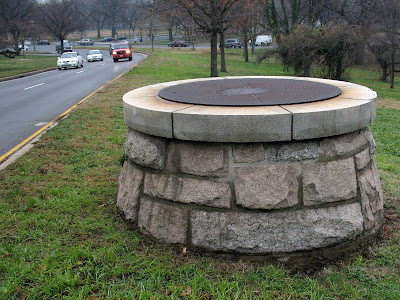 As you drive up the entrance ramp to the Theodore Roosevelt bridge from Constitution Avenue in Washington, you'll pass by a stone well with an iron cover. This is a remnant of an old Washington landmark known as Braddock's Rock, the Key of Keys (or the Quay of all Quays). Legendarily, this is where Braddock landed on his way to Fort Duquesne, in 1755. Bryson Rash in Footnote Washington calls this "perhaps the most unusual of all Washington's memorials, because it is at the bottom of a well shaft protected by a steel manhole cover."

In the 18th century, this spot was on the banks of the Potomac. In a 1940 article on soil erosion, L. C. Gottschalk summed up the situation:


Originally, there was a huge, flat-topped rock in Tiber Creek known as "The Key of All Keys," later renamed "Braddock's Rock." It is reported that, when General Braddock arrived at Alexandria, Va., in 1755, on the way to the French and Indian War, he sailed two of his ships, the Sea Horse and the Nightingale, to this rock and here disembarked his troops. The rock is no longer at the water's edge; for filling in of the bay has placed a thousand feet of land between it and the present bank of the Potomac.

The rock was blasted by C&O construction and quarried for building stone. Hugh Taggart in his 1908 book "Old Georgetown" says:

When the Chesapeake and Ohio Canal was constructed through this part of Washington, the tow path bank was filled in through the water of the river, and, in order to make it, it became necessary to blast and remove a large portion of this rock. During the administration of the early commissioners of the City of Washington large quantities of stone were quarried from this place and used in the construction of the public buildings.

Some of this stone was used for the foundations of the Capitol and the White House. The claim that this is Braddock's landing spot has always been controversial. Taggart cites the lack of documentary evidence and argues that it would have made more sense for Braddock to have landed nearer to Georgetown so as not to have to cross Rock Creek.

That General Braddock's force did not land at this place is also evident from the fact that the mouth of Rock Creek in those days was a very considerable body of water, and the point to which they wished to get, being the road from Georgetown leading to Fredericktown, Maryland, a landing on the east side of Rock Creek would have involved the unnecessary trouble of the crossing of another body of water - that is, the creek itself.

This drawing of the rock appeared in an article in the Washington Morning Times in 1896. 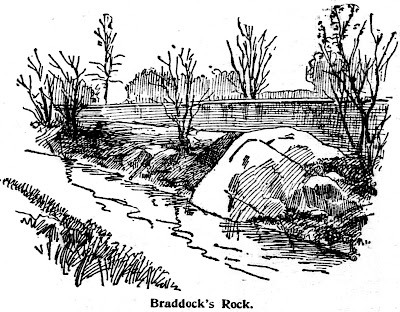 By the turn of the century, the rock had been buried on the grounds of the US Naval Hospital. The DAR put a fence around the old rock in 1899 but by 1906 the fence had been stolen. This photo of the unprotected rock appeared in an article in the Washington Times. 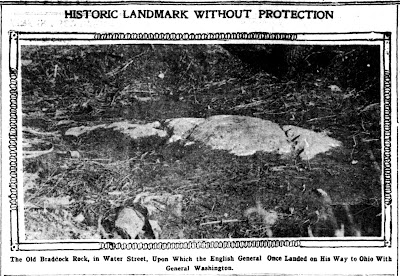 In the US Medical Journal for July 1916, J. D. Gatewood, then Medical Director of the Navy, says:

The rock at that time [1755] was, of course, on the water front, but in reclaiming the flats in this locality grades have been extensively altered, and in that connection the hospital grounds near the southern boundary have been filled in and graded, leaving the rock well below the present surface. This situation necessitated the building of a rectangular well with brick walls, at the bottom of which the rock is now found. This rock is the key of keys for this locality, and consequently a very important mark in connection with surveying work in the District.


In 1916, the DAR had designs on memorializing the rock and Braddock's 1755 landing. Gateswood continues:

The history and location of Braddock Rock is of course well known to the various patriotic societies of the country and seems to have attracted the special attention of the Daughters of the American Revolution, who have a committee selected for the purpose of marking historic places associated with the Colonial and Revolutionary periods.

But the rock was not marked until the 1964 when construction workers building the on-ramp to the Roosevelt Bridge erected the current round well and added an aluminum marker. 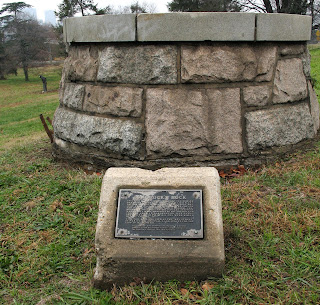 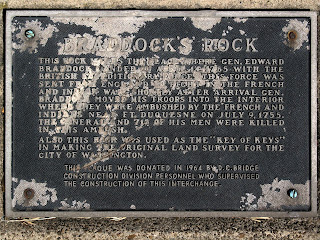 Braddock's Rock
This Rock marks the Place where Gen. Edward Brddock landed on April 14, 1755 with the British Expeditionary Force. This force was sent from England to fight in the French and Indian War. Shortly after arrival Gen. Braddock moved his troops into the interior where they were ambushed by the French and Indians near Ft. Duquesne on July 9, 1755. The General and 713 if his men were killed in this ambush.
Also This rock was used as the "Key of Keys" in making the orginal land survey for the city of Washington.
This plaque was donated in 1964 by D. C. Bridge construction division personnel who supervised the construction of this interchange.

The actual rock can be seen in the bottom of the well in this photo I took though one of the holes in the iron cap. The holes are reflected in a star pattern. The rock is peeking out of the water near the foot of the ladder on the left. 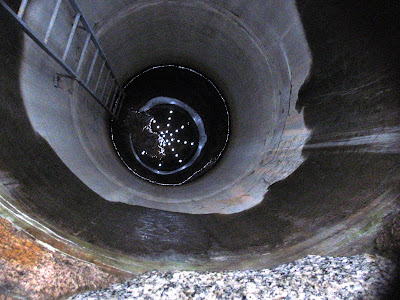