Mary the Mother of Washington 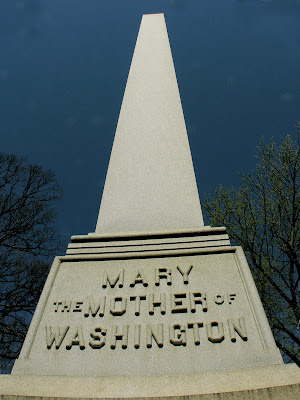 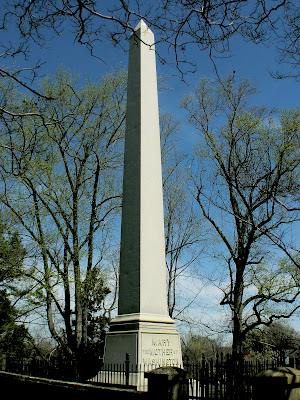 This portrait of Washington's Mother Mary appears in Hetzel, 1903 and is said to be a photogravure "from a portrait in the possession of Mrs. F. S. B. Morse".
﻿ 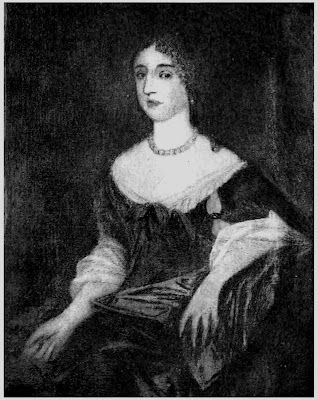 When Mary Washington died in 1789, she was buried at Kenmore, the home of her daughter, Betty, and her son-in-law, Fielding Lewis. By 1831, the grave's location was lost. It was relocated with the help of "an old Negro" who had helped dig the grave. Silas Burrows, a New York philanthropist,  began the erection of a monument on the grave. Andrew Jackson attended an elaborate ceremony in 1833 to dedicate the monument. But Burrows died in China soon after starting the project and it was never completed. The unfinished monument, with its obelisk lying on the ground, sat at the corner of the cemetery of the Gordens, the then owners of Kenmore. 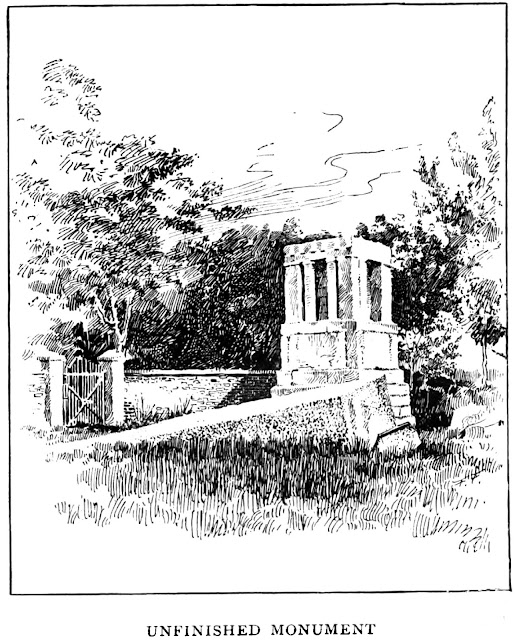 In 1862, Frank Leslie's Newspaper reported that confederate troops were using the monument for target practice. 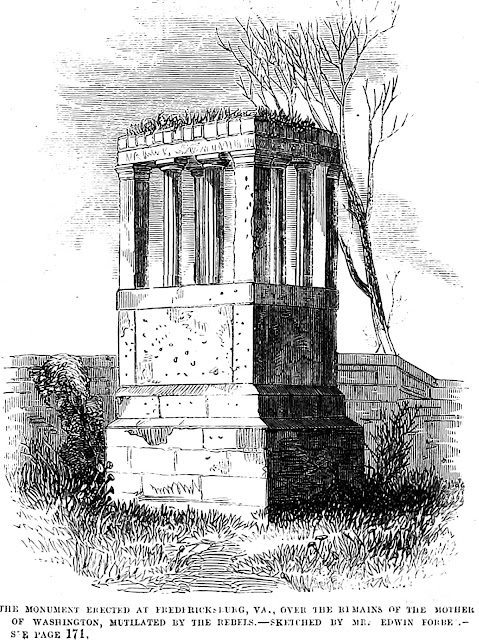 The Monument erected at Fredericksburg, Va., over the remains of the Mother of Washington, mutilated by rebels. -- Sketched by Mr. Edwin Forbe. -- See Page 171. 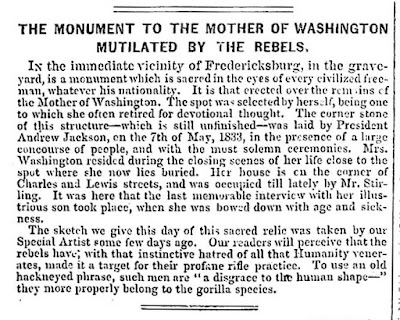 "The Monument to the Mother of Washington Mutilated by the Rebels

In the immediate vicinity of Fredericksburg, in the grave-yard, is a monument which is sacred in the eyes of every civilized freeman, whatever his nationality. It is that erected over the remains of the Mother of Washington. The spot was selected by herself, being on to which she often retired for devotional thought. The corner stone of this structure -- which is still unfinished -- was laid by President Andrew Jackson, on the 7th of May, 1933, in the presence of a large concourse of people, and with the most solemn ceremonies. Mrs. Washington resided during the closing scenes of her life close to the spot where she is now buried. Her house is on the corner of Charles and Lewis Streets, and was occupied till lately by Mr. Stirling. It was here that the last memorable interview with her illustrious son took place, when she was bowed down with age and sickness.

The sketch we give this day of this sacred relic was taken by our Special Artist some days ago. Our readers will perceive that the rebels have; with that instinctive hatred of all that Humanity venerates, made it a target for their profane rifle practice. To use an old hackneyed phrase, such men are "a disgrace to the human shape --" they more properly belong to the gorilla species." -- Frank Leslie's Illustrated Newspaper, New York, No. 349 Vol. XIV, June 14, 1862.

﻿
﻿In 1899,  this "Terrible Advertisement" galvanized the two women's preservation groups to erect a new monument to Mary Washington (Hetzel, 1903): 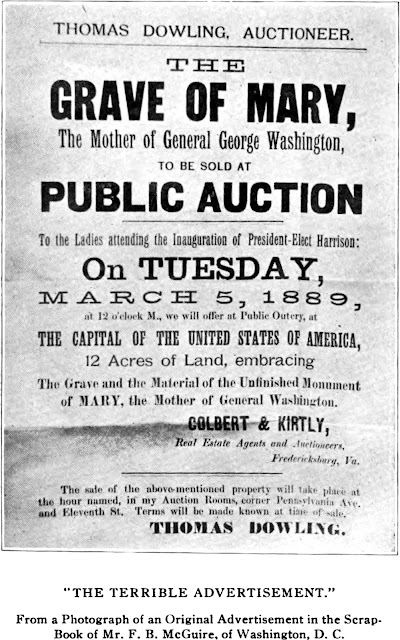 The two women's organizations disagreed as to the form of the new monument. National Association favored a simple obelisk. 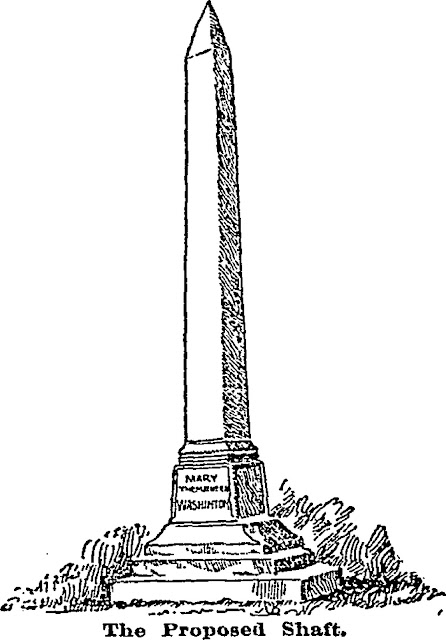 The Fredericksburg association favored a more elaborate and expensive monument. Mrs. Terhune (aka Marion Harland) described it this way in the New York Times "a towering column surmounted by a colossal angel, presumably Mary Washington in apotheosis -- the marble approached through a boulevarded park." The plan to break-up the original obelisk and fashion from it miniature models of the monument sparked controversy as well. One local preservationist wrote of the old monument:


A thousand historical associations cluster about its base and swarm around its summit. Its corner stone was laid by Andrew Jackson. It has been baptized amid the fires of war, and has brooded over the death of heros. It is rich with memories of storied past. It is now a ruin, but "a land without ruins is a land without memories" and the ruins of this hallowed tomb are to many thousands rich in precious memories.

When the current monument was finally dedicated in 1894 the ceremony was attended by President Grover Cleveland. It stands 50 feet tall in about the same proportions as the Washington Monument in DC. It is said to be the first (only?) monument erected by women to a woman. The  obverse inscription reads "Erected by Her Country-Women." 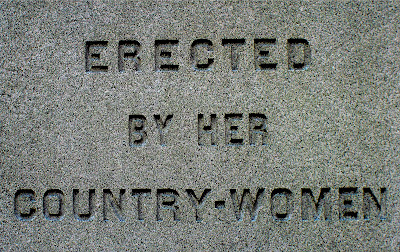 The shafts of two of the doric columns from the earlier monument still exist in the garden of Mary Washington's House in Fredericksburg. 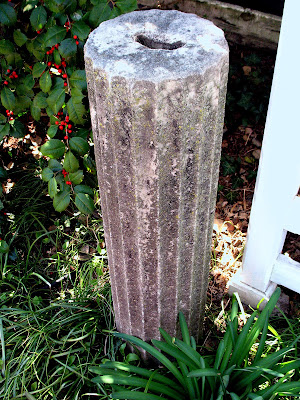 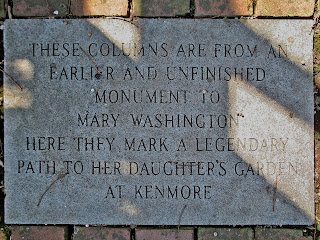 These columns are from an earlier and unfinished monument to Mary Washington. Here they  mark a legendary path to her daughter's Garden at Kenmore.

Mary Washington's role in the veneration of George Washington begins with Parson Weems' tale of her prophetic dream in which 5-year-old George puts out a house fire, representing the revolution -- a civil annunciation -- and ends with the apotheosis of Washington described by Weems and embodied by Brumidi's painting on the Capitol ceiling -- a civil ascension.
Posted by Allen Browne at 4:22 PM