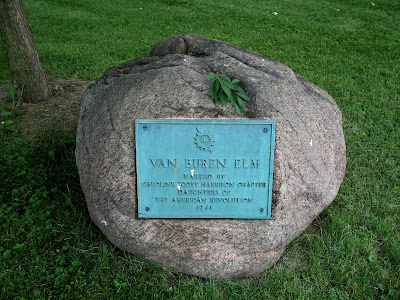 On Main Street in Plainfield, Indiana, in front of the Friends Meetinghouse, we find a boulder with a DAR plaque marking the Van Buren Elm.

With little or no information on its face, this marker can only be understood by those who already know the story.  Mary Beth Temple shared our puzzlement. "When I first heard about the Van Buren Elm, I didn't quite understand why the county was honoring a tree, but further research into the story showed me it was a very important tree indeed."

Ronald Reagan mentioned the tree in a 1987 speech:


I was especially struck when, on the way in, someone mentioned that Hendricks County was also the home of the famous Van Buren Elm, a magnificent tree named for President Van Buren when he visited nearby Plainfield. I thought that naming a tree in honor of a President was a fine thing to do, and I even daydreamed for a moment about having a tree named after myself. [Laughter] And then I found out a little more about the Van Buren Elm. [Laughter] It turns out that Van Buren was riding in a carriage when the driver took a sharp turn around the elm, throwing Van Buren out of the carriage and into the mud. [Laughter] And in case you're wondering, the answer is, yes, I've warned the Secret Service to be on the lookout for elms. 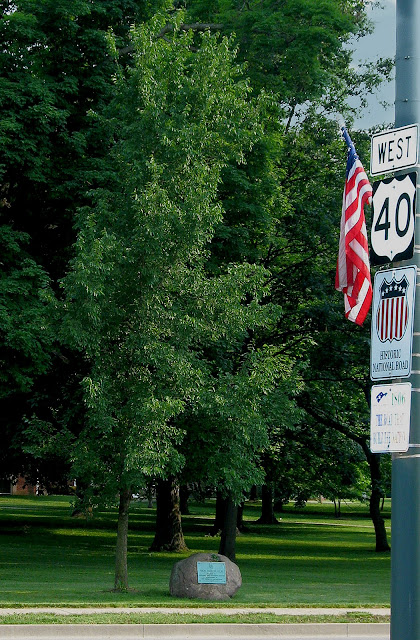 Temple tells the story in a little more depth.  "The Van Buren Elm ... was the site of an 1842 incident in which President Van Buren, who had recently vetoed further funding for improvements in the National Road, was unceremoniously dumped form his carriage into the mud. While tree roots were blamed, it was widely known by the locals that the tree had more than a little help in tripping up the President."

The National Road was the first federally funded road project. It was a commercial life-line to the farmers of Indiana in the early 19th century. The road provided a route to the east and a market for agricultural products. To the Hoosiers it meant the difference between subsistence and commercial farming; it made it possible to build wealth.  Van Buren's veto endangered that. The claim that the residents of Plainfield devised the accident has the feel of folklore.


In 1842, ex-president Martin Van Buren (in office 1837-1841) was campaigning in Indiana in preparation for the presidential election of 1844. Years earlier, Van Buren had opposed a bill that would have provided federal funding for the improvement of roads. Some residents of Plainfield decided to teach Van Buren a lesson by subjecting him to an uncomfortable ride over the unimproved highways. The driver of the mail coach which was carrying the ex-president from Indianapolis to Terre Haute who was a native of Plainfield decided to whip the team into a gallop during the last half-mile coming into Plainfield. As the coach approached a large mud hole -- known as a wallow for hogs -- the driver attempted to slow the team. The team reared and backed, throwing the coach out to the left, where it climbed the bank before running up against the roots of a great elm tree. The stage slowly turned over on its side, landing in the center of the hog wallow, as the driver jumped to safety. Van Buren climbed out the upward-facing side of the coach and waded through the mud to Fisher’s Tavern at what is now 106 E. Main Street. The road was lined with people from the surrounding county who had hoped to see Van Buren pass through. Mrs. Fisher helped clean the mud off of Van Buren’s pearl-gray trousers, frock coat, and wide-brimmed hat. This incident was long remembered as a moment when the people of Plainfield had made their point to the ex-president. One newspaper remarked that “the only free soil of which Van Buren had knowledge was the dirt he scraped from his person at Plainfield.” The large elm tree, located on the south side of Main Street in the Friends Meetinghouse grounds, became known as the “Van Buren Elm” and was the subject of souvenir postcards. A marker was erected on the site of the tree when it was cut down. An elementary school was later named for Van Buren, and the Plainfield High School yearbook was for many years called the Van Buren Elm.

In the mid 19th century, the National Road lost its economic importance when long distance roads were supplanted by the railroads. The arrival of the automobile in the early 20th century lead to a revival of interest in road travel. The DAR adopted the "Good Roads" movement and began marking the National Old Trails Road which connected a number of historic roads and trails including the Old National Road.  The ladies painted tri-colored  markers on trees and poles, placed historical markers, and drove around with banners proclaiming the National Old Trails Road. This incident occurred in 1913:


Indianapolis News
Mrs. Caleb S. Denny leaped from an automobile to-day and chased a young man into the tall weeds of a vacant lot to recover a D. A. R. pennant which a young man had torn from her machine while it was in motion. Mrs. Denny recovered the pennant.
A motor car filled with members of the Old Trails Road Committee were returning from a trip to Plainfield where they had been arranging to have the telephone poles marked with the National colors to designate the route of the National Road through Indiana. The National Old Trails Road pennant flying at the front of the automobile caught the fancy of the young highwayman; he ran through a passageway between two buildings with Mrs. Denny in hot pursuit, through weeds more than shoulder high. About fifteen men and boys started on the trail of the thief, who dropped the pennant, which was restored to Mrs. Denny. The women were profuse in their thanks to the knight of the chase.
"And this happened right here in the city, too," said Mrs. Brigham. "We had been to Plainfield to ask the town board to mark the historic road and the old Van Buren elm tree which stands beside the road."

In 1916, while the DAR in Maryland were marking Dowden's Ordinary, The Indiana Daughters placed a wooden sign on the Van Buren Elm. 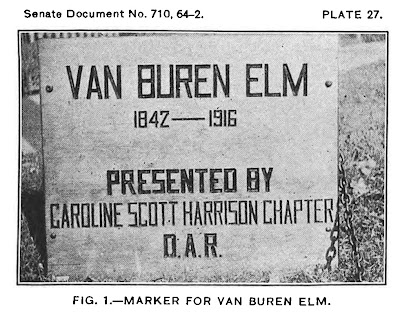 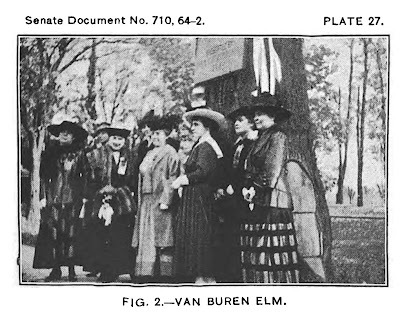 The sign is clearly visible in this 1926 photo of the old elm from the Indiana University. 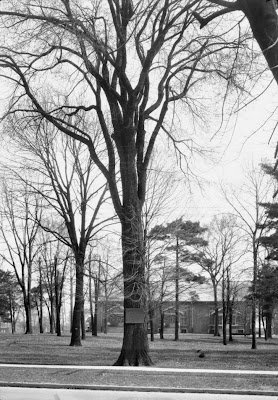 The old tree came down in wind storm in 1926.  Dr. J. S. Ragan wrote that "The many friends of the old historic tree are loth to have it removed from their midst."
Posted by Allen Browne at 6:37 PM